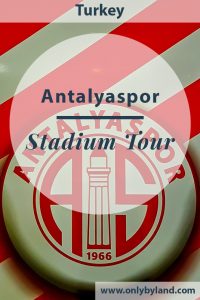 Antalyaspor FC is a football team based on the Mediterranean coast in Southern Turkey.  Reasons to visit the New Antalya Stadium include;

I was staying at the Patron Boutique Hotel in old town Antalya.  As a result I could either walk to the stadium or take the historic tramway. 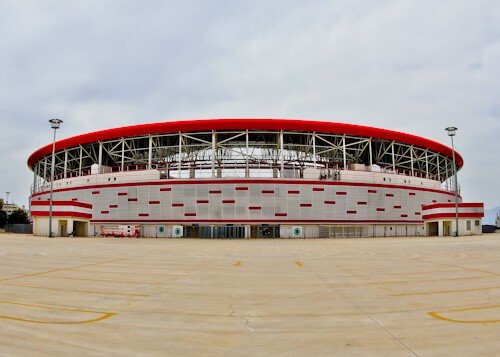 The Centennial Arena is located nearby the Antalya Archeological Museum.  If you’re visiting this popular museum, it may be worth checking out the Antalyaspor stadium tour as well.  In fact there is no official stadium tour, to enter you must ask security at the entrance.  They’ll be excited that foreigners are interested in Antalyaspor and proud to show you their stadium.  You could leave a tip afterwards?  For an idea of how much to tip, an official Galatasaray stadium tour costs €4. 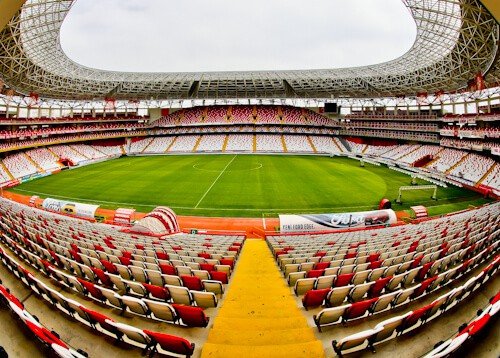 The Centennial Arena has a capacity of over 32,000 seats.  They are the red and white colors of Antalyaspor as well as the national flag of Turkey.  It’s called the Centennial Arena to honor the 100th birthday of Mustafa Kemal Ataturk, founder of the Republic of Turkey.  The road which passes the stadium has the same name  (Yıl Bulvarı).  Furthermore, the largest stadium in Turkey is called the Ataturk Stadium. 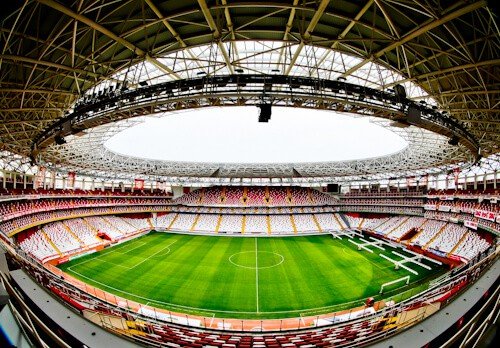 On top of the Centennial Arena roof are 5600 solar panels.  As a result, the whole stadium is powered by solar energy.  For this reason it’s one of the most eco-friendly stadiums in the world. 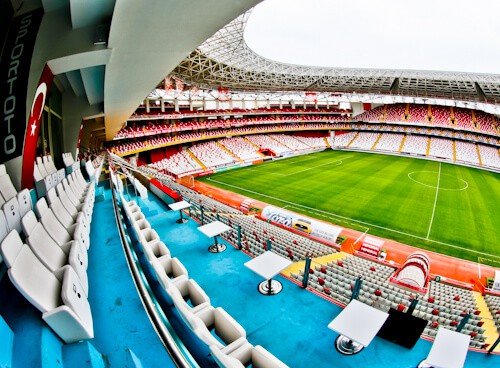 The VIP seats not only have the best view but they also have the most legroom.  In addition, seats in the VIP have access to the VIP suite.  If you’re visiting to watch a football match it’s worth checking out the ticket price for this area.  The best VIP match day experience however, is at the Athletic Bilbao Stadium in Spain. 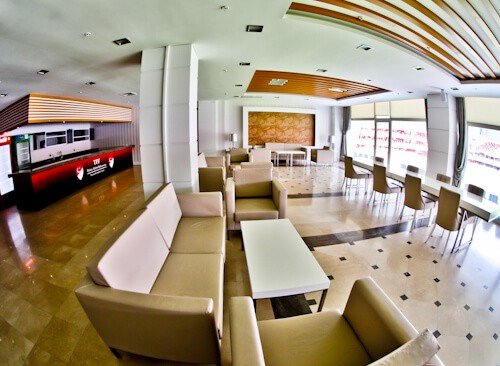 In the VIP suite you have access to a bar as well as fresh food.  Although Turkey is an Islamic state, the purchase of alcohol is surprisingly convenient!  In addition, the suite is a good place to escape the Antalya heat. 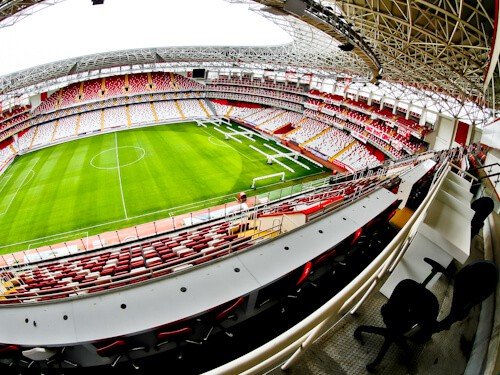 The media seating area is located above the VIP area.  When you’re watching the game on TV, this is where the commentators sit and watch the action.  In this area you can see where they plug in their microphones as well as computers.  It’s not as impressive as the Besiktas media area, nevertheless, you have a wonderful aerial view of the stadium. 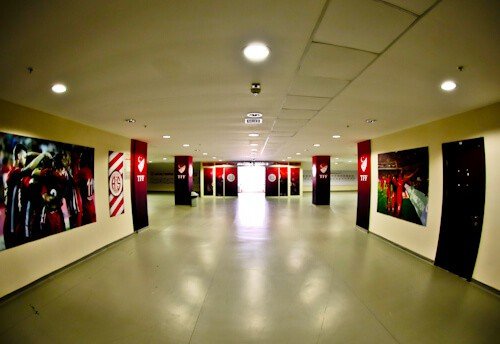 You can walk through the players tunnel to the pitch, exactly as the Antalyaspor players do.  As you walk through there are Antalyaspor images and banners surrounding you.  This reminds the visiting team where they are and of the past successes of the club.  At this point, I recommend you ask the security if you can see the dressing rooms.  I asked but unfortunately they were locked, you may have better luck. 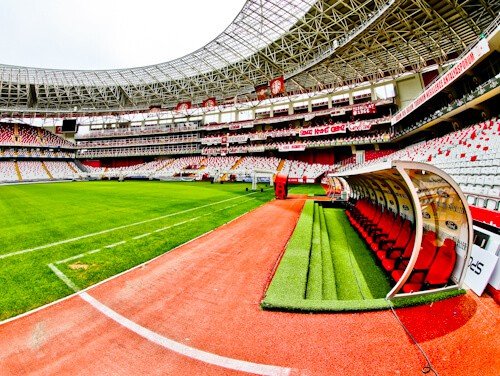 At pitch side you can sit in the dugout.  A famous player who used to play here was Samuel Eto’o.  He was a multiple African player of the year award winner who also had successful spells at Chelsea as well as Inter Milan.  Additionally, several Brazilian players have played for Antalyaspor.  You may sit in the dugout and take your selfie here.

To gain entry you must ask the security guard.  Tell him you’ve come from your country and would like to see the Antalyaspor stadium.  He should at least take you for a photo inside the stadium.  Show a little more interest and he may take you on a full Antalyaspor stadium tour!  Don’t be shy to give him a couple of Euros as a thank you.

How to watch a football match in Turkey at the Fenerbahce Stadium.