Bangkok – Things to do in Bangkok Thailand 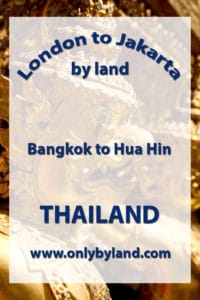 Things to do in Bangkok

Bangkok is the capital city of Thailand, things to do in Bangkok include;

Bangkok is huge, the traffic can be terrible and it’s too hot to walk around, so you need to choose the location of your hotel carefully.  I would recommend staying in the Asok area which is close to the skytrain, underground train and 1 stop away from the airport link.  The sky train runs over Sukhumvit road, so you can check hotels anywhere on Sukhumvit, just make sure it’s within walking distance of the Skytrain as you don’t want to get sat in traffic in a taxi. 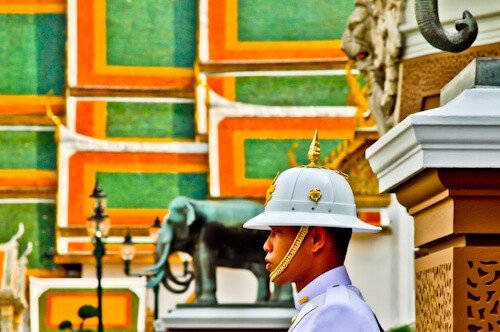 The Grand Palace is the former residence of the King of Thailand, when he sadly passed away recently this is where the Thai people came to mourn.  The coronation of the Kings of Thailand happen at the Grand Palace.  On visiting the Grand Palace you’ll see Thai soldiers and guards protecting the palace as well as posing for photos.  The Palace is a beautiful structure with colorful gardens in addition to the majestic buildings. 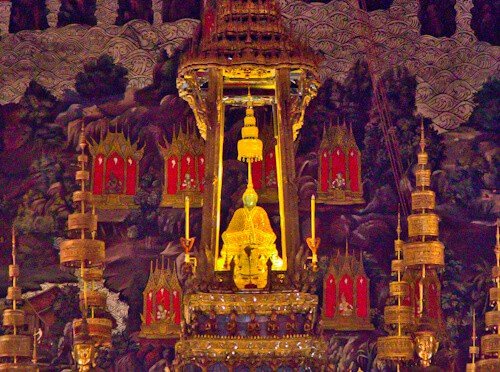 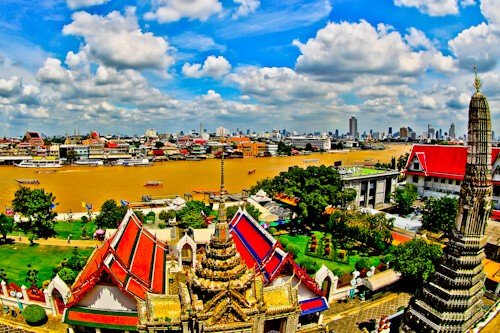 Wat Arun, known in English as ‘Temple of Dawn’ dates back to the 17th century but the spires were not added until the 19th century.  You can climb the spires to take a wonderful city shot over the Chao Phraya river (above).  It is said that the best time to go is sunrise when the sun reflects off the spires and it’s extremely quiet.  Additionally, Wat Arun is also a good place to get a good monk shot as there are plenty here going about their daily routines.

How to get to Wat Arun

To get to Wat Arun you need to cross the famous Chao Phraya river which runs through Bangkok.  To cross the river you’ll be encouraged to take a boat which costs around 200 baht.  This sounds a decent price but if you check where the local boat over the river leaves from, this boat will cost less than 5 baht.  In the near future the Chao Phraya river could become the first UNESCO world heritage site in Bangkok. 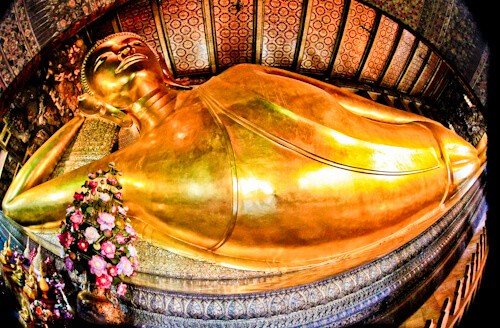 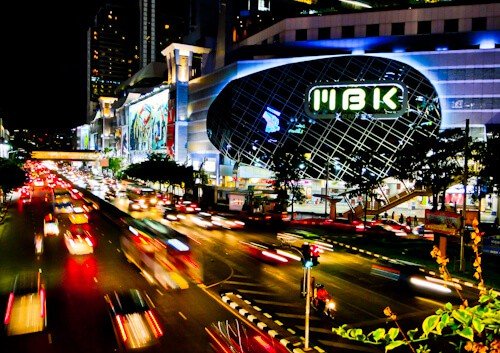 There are 3 famous markets in Bangkok, Chatuchak (JJ weekend market), MBK Center and Pratunam.  If you want the Thai market experience then any of these locations should meet your requirements, they each sell virtually the same things at the same prices.  Each of the markets can be reached by skytrain (Pratunam by airport link).

The biggest of the markets in Bangkok is Chatuchak Weekend Market.  It’s actually open during the week but during the weekend there are much more stalls (and people).  Almost anything you can imagine is sold here, including a pets section with questionable animal conditions.  This market can be reached from the Mo Chit skytrain station as well as the Chatuchak Park subway station.

You should consider MBK if you want to stay inside in the air conditioning whilst exploring a market, your energy will last longer.  MBK is also conveniently located within walking distance of Siam Paragon, Siam Center and Central World.

Pratunam is a huge market located close to the airport link but you could also walk there from the Chit Lom Skytrain station.  Most importantly it’s probably the cheapest of the markets as it’s not so touristy.  Located in Pratunam is the Baiyoke Tower II.  This was the tallest building in Bangkok and you can pay to reach the observatory on the top floor for a city view.

An alternative market to these is the infamous Patpong night market.  Patpong has featured in movies such as The Hangover 2 and Bangkok Dangerous.  The market is expensive, rife with pickpockets and very seedy. 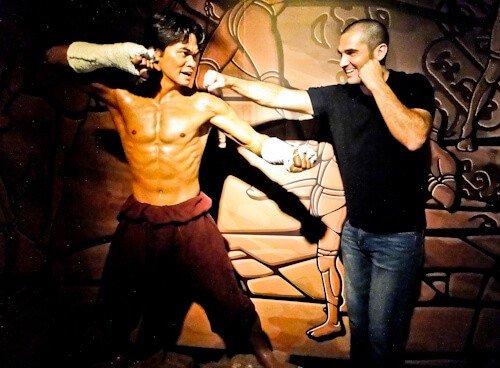 Bangkok has more recently become famous for its modern shopping malls.  In fact, along Sukhumvit road you’ll find countless shopping malls.  As an illustration, almost every stop on the Sukhumvit line of the Skytrain is connected to a shopping mall.  My favorite malls are, Siam Paragon, Emquartier and Central World which is one of the biggest in Asia.  In addition, Siam Discovery is where you’ll find a waxwork of the most famous Thai actor, Tony Jaa.  Tony Jaa has recently starred in the Hollywood action movies, Furious 7 in addition to xXx.  He is famous for his Thai boxing skills and rose to fame in the Thai movie Ong Bak, which features a Tuk Tuk chase through the streets of Bangkok. 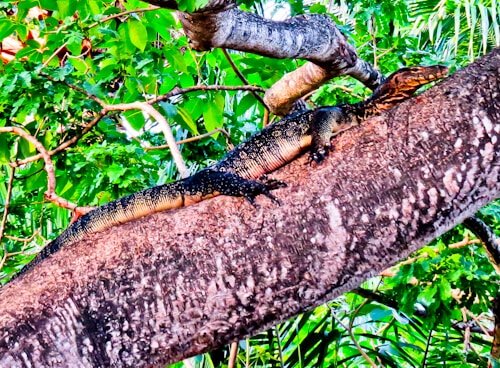 Lumpini Park is the Bangkok equivalent to Central Park in New York.  It’s hot in Bangkok so I recommend visiting the park early morning or in the evening.  Lumpini is famous for it’s monitor lizards, you’ll see these walking around the park as well as swimming in the water and climbing trees.  They’re not dangerous and are actually scared of you.  I recommend being quiet and walking slowly when you want to take their photo, or they will run away quickly. 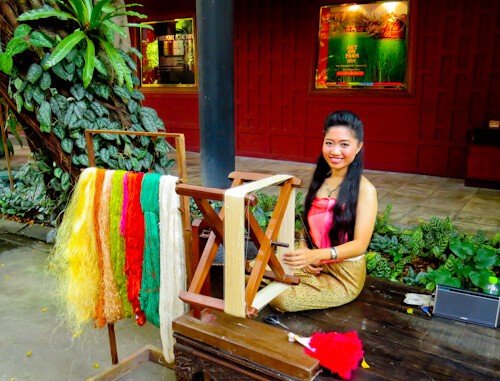 The Jim Thompson Houses are traditional Thai buildings and gardens in the center of Bangkok.  They’re the former residence of American businessman, Jim Thomson who mysteriously disappeared into the jungles of Malaysia in 1967.  He built the residence in the 1959 to show off his art collection.  He had a huge silk business based in Bangkok which is why he chose to build his residence here.  Additionally, there are Jim Thompson silk shops in most of the shopping malls in Bangkok.  For this reason if you don’t make time to visit his house you can still see traditional Jim Thompson silk clothes in his shops.

How to get from Bangkok to Hua Hin 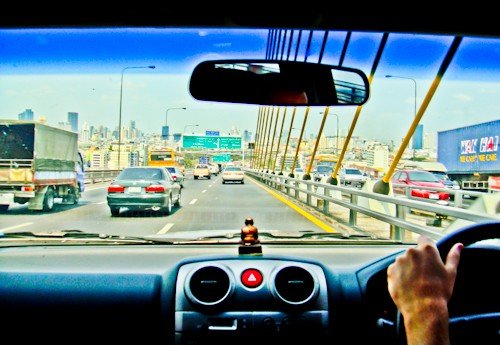 From Bangkok I drove south to Hua Hin, on leaving Bangkok you’ll cross the famous Rama VIII Bridge.  The bridge was constructed between 1999-2002 to relieve traffic congestion.  Although the traffic in Bangkok can be bad, imagine what it would be like if they hadn’t dramatically improved the infrastructure over the past few years.  The road between Bangkok and Hua Hin is motorway the whole way which means you should get there between 2-3 hours.  You may be tempted to speed but there are police speed check along the way so be careful!