Barcelona is the second biggest city in Spain therefore full of iconic landmarks.  Here are a few Barcelona landmarks;

The good news about hotels in Barcelona is that they’re competitive and therefore good value.  Moreover, you easily travel the city independently with the use of an unlimited travel card. 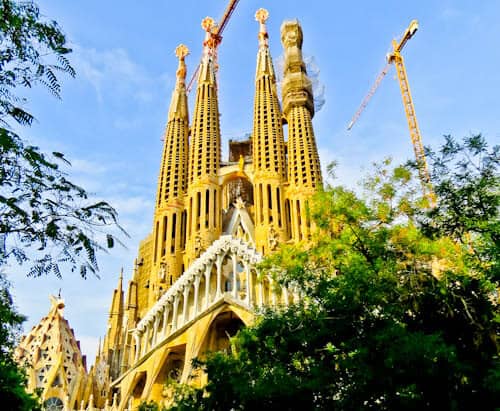 The Sagrada Familia is not only one of the top Barcelona landmarks but also a top world landmark.  For this reason, no visit to Barcelona is complete without seeing the Sagrada Familia.  Unfortunately, this is an incredibly busy landmark therefore buy a skip the line ticket in advance.  Construction on the Sagrada Familia began in 1882 and it remains unfinished today.  However, it has still been awarded UNESCO world heritage status.

Did you know there’s an unfinished hotel in Pyongyang, North Korea and a huge unfinished orthodox church in Belgrade, Serbia? 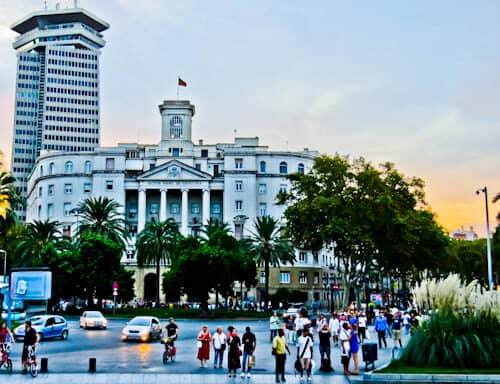 La Rambla or Las Ramblas is the main shopping street of Barcelona.  As a matter of fact it is to Barcelona Landmarks what Stroget is to Copenhagen Landmarks.  No visit to Barcelona is complete without a walk through La Rambla.  Several points of interest are located on this street including Catalunya Plaza, Palau Guell and Casa Bruno Cuadros.  Finally, it’s part of the Gothic Quarter of Barcelona, as a result, it’s highly likely you’ll take some of your best photos in this area. 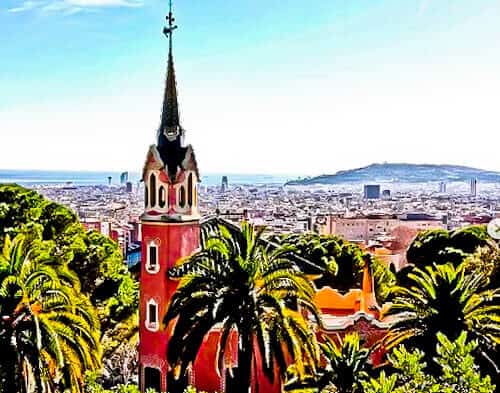 Park Guell is a piece of work by Antoni Gaudi, the same architect of the Sagrada Familia.  This should be enough reason for you to make a visit.  If it’s not, then the fact it’s a top Barcelona Instagram spot should be!  A must in the park is to climb the famous Dragon staircase for a Barcelona panoramic.  As you would imagine, Park Guell is extremely popular, for this reason, you should buy a skip the line advance ticket. 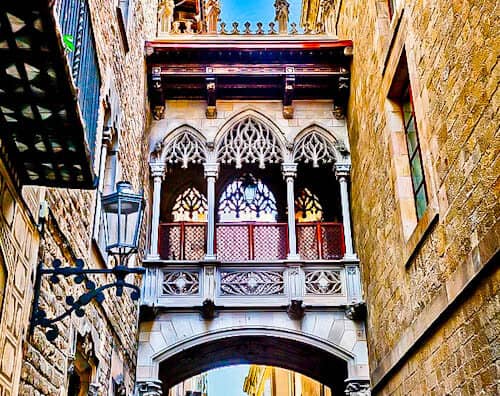 Located in Barcelona Gothic Quarter is the Bridge of Sighs.  As a matter of fact it was inspired from the original Bridge of Sighs which is one of the famous Venice Landmarks.  It’s known as Pont Gotic in Catalan and this is the exact location. 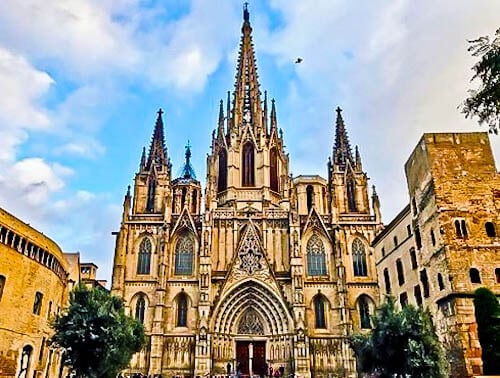 With the presence of the Sagrada Familia in the city, Barcelona Cathedral is often overlooked.  It is however, a stunning 14th century Gothic cathedral.  If you pay attention to the roof, you’ll see gargoyles as well as other creatures. 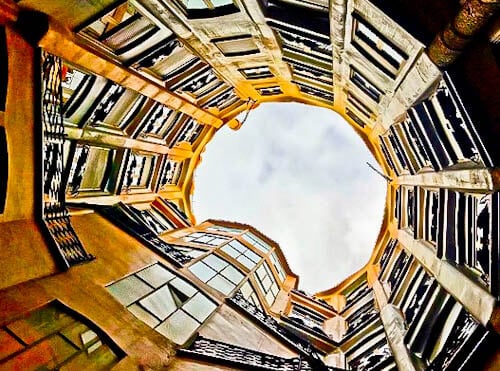 Casa Mila is known as the stone quarry due to its unique facade.  It is in fact, another piece of work by Spanish architect Antoni Gaudi.  Not only can you view the facade but you can go inside, photograph the interior and even a rooftop panoramic.  Finally, Casa Mila is extremely popular therefore I recommend you buy a skip the line advance ticket. 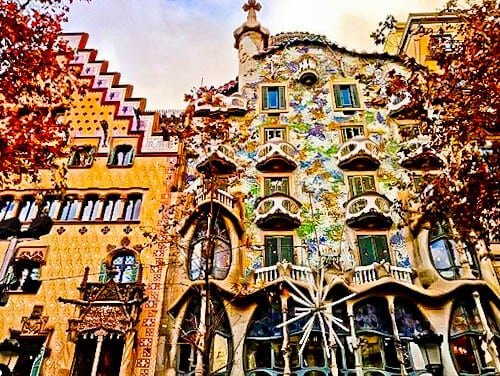 Casa Batllo is yet another example of Antoni Gaudi’s work in Barcelona.  The facade is stunning but you must visit the interior which features the Antoni Gaudi Modernist Museum.  As with the Casa Mila, you can take a wonderful interior shot looking through to the sky.  As with the other Gaudi works, it’s highly recommended you buy a skip the line advance ticket. 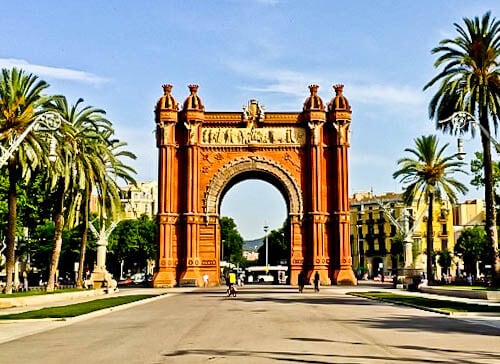 The Triumphal Arch of Barcelona was built as a grand entrance gate to the 1888 World Fair.  It still stands today and is a major landmark of the city.  Did you know there is also a triumphal arch in Bucharest, Romania? 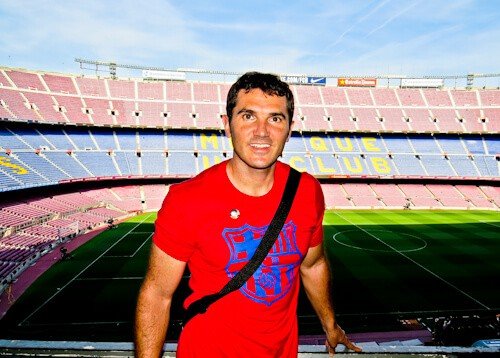 If you’re a reader of my blog then you’ll know I visit football stadiums.  If there’s only one stadium you visit in Europe then it should be Camp Nou.  The reason being it’s the biggest stadium in Europe.  Additionally, it’s home to arguably the most popular team in the world!  On a Barcelona stadium tour, you’ll visit pitch side, changing rooms, press rooms, VIP rooms, stadium panoramic as well as the Barcelona Museum. 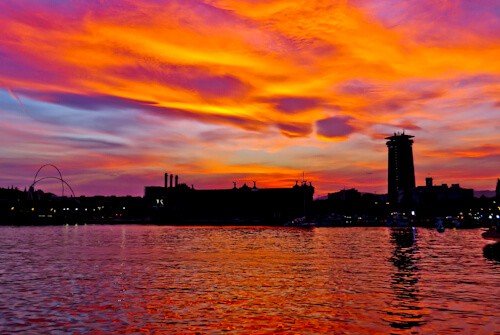 Maremagnum Shopping Mall is a good sunset location in Barcelona.  The sun sets and creates a silhouette of the famous Barcelona landmarks.  Furthermore, around the mall are lots of outdoor restaurants, bars as well as chill out areas.  Enjoy!

How to get from Barcelona to Madrid by Bus 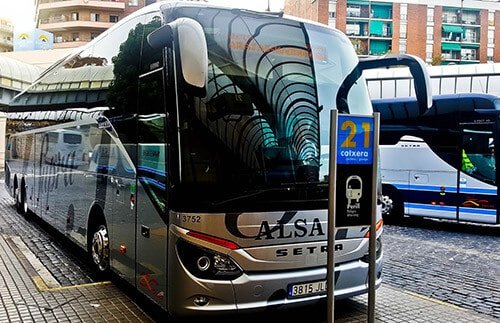 I took an Alsa bus service from Barcelona Nord bus station which is close to the Arc de Triomf.  It’s about 6 hours to Madrid at a cost of €37.  There were phone chargers and free WiFi onboard, also free snacks and water.