Why Bath in England is Britain’s Italian City

When you visit Bath in England the best place to stay is without a doubt the Queensberry Hotel which features its very own Michelin star restaurant. 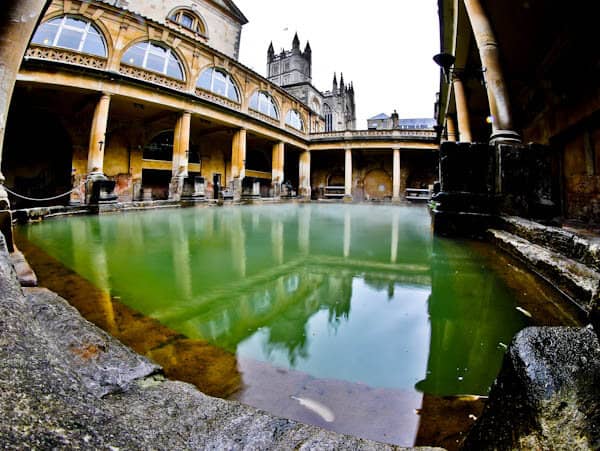 The Roman Baths were one of the largest in the Roman Empire.  Additionally, these baths are today’s top tourist site in the city of Bath.  Not only will you find the famous Roman Baths here but there’s also a large museum on how Romans lived in this area.  As a matter of fact, you’ll also see the remains of a Roman Temple.  In addition to visiting the museum and historic Baths, you can also drink the warm natural spring water (of course it is treated first!).  Discover more on how to visit the Roman Baths, Bath.  Lastly, another place where you can swim in ancient Roman baths is Hierapolis, Turkey which is co-incidentally one of the most beautiful places on earth.

Even in Italy there are not many statues as well preserved as the goddess Sulis Minerva.  Unfortunately the body was destroyed but the head still remains.  The statue is made of bronze and covered in golden leaves.  When you explore the Roman Baths museum, this is arguably the most striking artefact.

Above the Roman Baths are several statues of important Romans and Roman Emperors.  Amongst these is that of arguably the most famous Roman, Julius Caesar.  When you enter the Roman Baths complex you can walk beside these life size statues.  Julius Caesar statues can be found throughout modern day Italy including in Naples and Rimini.  Finally, did you know Julius Caesar is blamed for the burning of the great library of Alexandria, Egypt?

The Arch – Bridge of Sighs 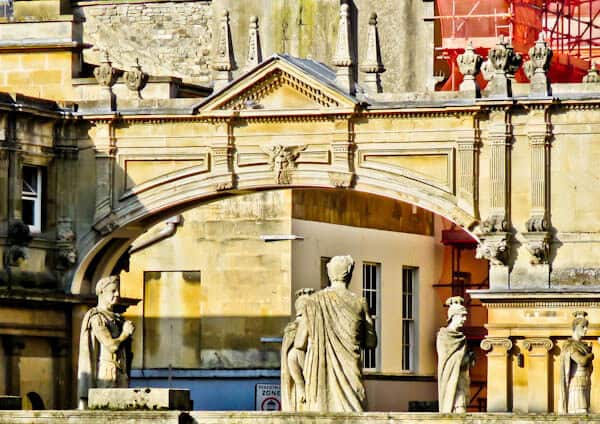 One of the most famous Venice landmarks is the Bridge of Sighs.  It’s a picturesque bridge which of course crosses a canal in Venice.  In comparison, the Arch of Bath in England crosses a street.  To confirm its Italian influence the Arch is decorated with a Roman God.  Did you know there’s also a Bridge of Sighs in both Barcelona and Oxford.

Ponte Vecchio is a famous bridge in Florence, Italy.  After the famous Duomo it’s probably the cities most famous landmark.  The Pulteney Bridge has no Italian influence however, it’s a very similar structure to Ponte Vecchio.  What’s more, in front of it is a picturesque mini waterfall.  Perhaps the combination of the reflection in the calm water beneath it as well as the waterfall, Pulteney Bridge is in fact more photogenic than its Italian counterpart. 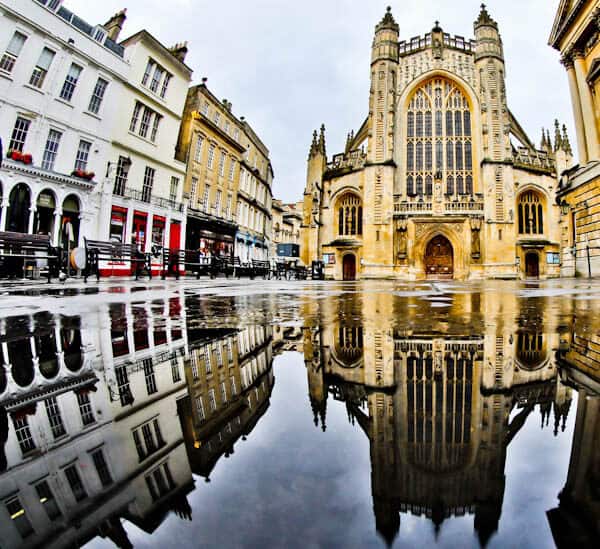 Firstly, I cannot say that Bath Abbey is nearly as beautiful as the Duomo in Milan.  Nor did it take over 600 years to build!  However, as with the Milan Duomo, Bath Abbey features some intricate details.  Most notably the ladder of angels on the facade.  In addition, you’ll see Jesus, Mary, John the Baptist and disciples sculpted on the facade.  Another interesting fact about the Abbey is the first King of England, King Edgar was crowned here.  Lastly, the tower of Bath Abbey is the tallest building in Bath and you can ascend it for panoramic views of the city. 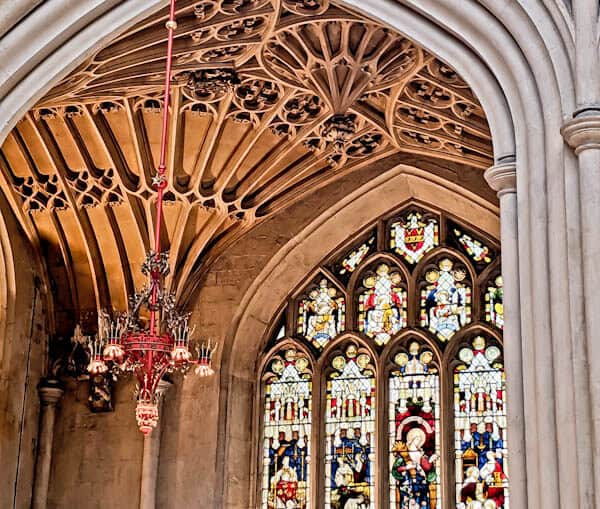 I compare Bath Abbey interior to Santa Croce Church in Florence.  The reason is because both churches house several memorials and tombs.  In addition to the memorials, be sure to look up and admire the stained glass windows, huge organ, vaulted ceiling as well as the chandeliers. 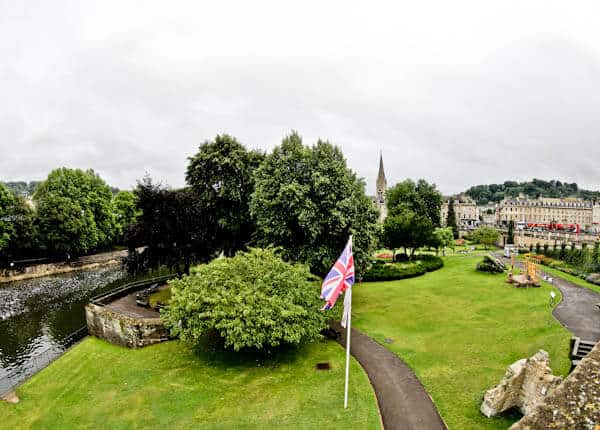 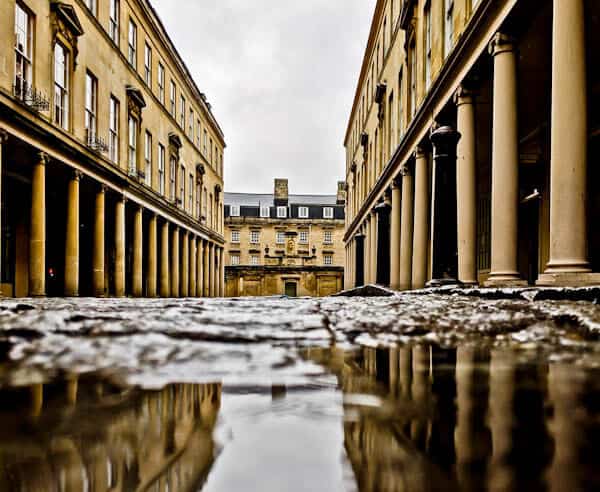 Nowadays, there are not many modern cities with Roman columns integrated into them.  On the contrary, part of the Bath high street features Roman columns.  Some curve around the street as the columns in Vatican City do.  You’ll find the majority of the Roman columns around Bath St and Stall St. 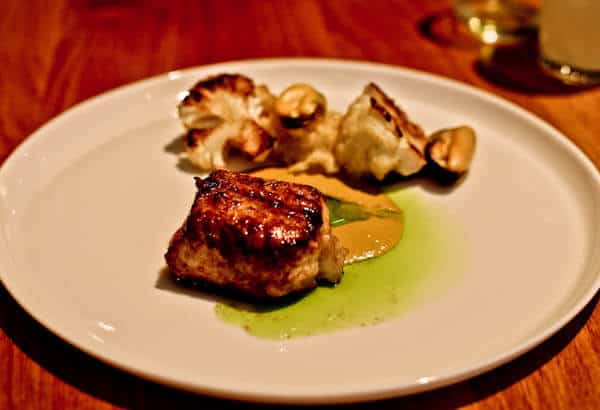 Italy has a reputation for good food.  Comparatively, Britain definitely isn’t a top foodie destination.  However, if you visit the Olive Tree restaurant, your view on British food will definitely change!  Read about my experience at the only Michelin star restaurant in Bath.

Pose for Pictures with Ancient Romans 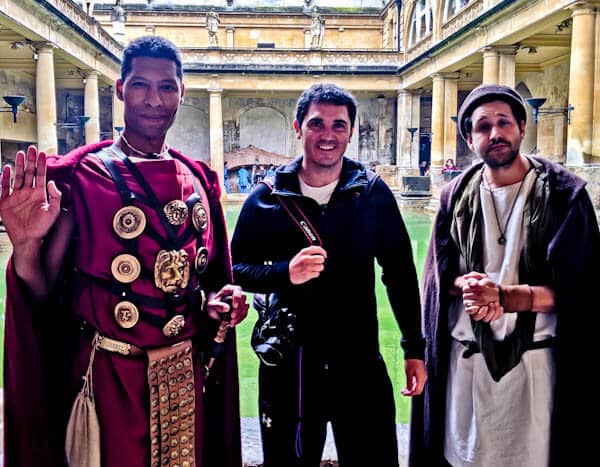 The Colosseum in Rome is one of the top travel destinations in not only Europe but the whole world.  For this reason, there are people dressed as Romans and Roman Emperors at the entrance.  You must pay these characters to take a picture with them.  However, if you visit the Roman Baths in Bath you can take your picture with Romans at no additional cost – perfect for your Instagram feed! 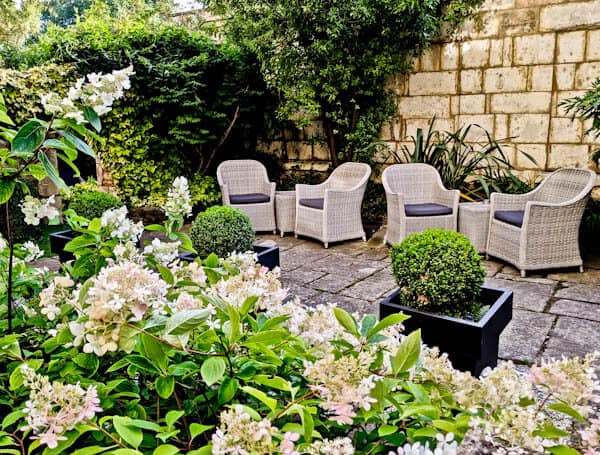 In Italy you may find peaceful gardens to enjoy a Prosecco.  Indeed this is also possible during your trip to Bath in England.  I stayed at the Queensberry Hotel which features peaceful walled gardens to escape the city.

Lastly – A Piece of Belgium 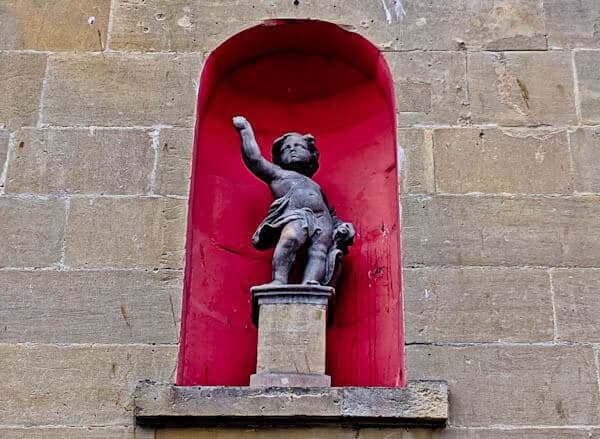 Manneken Pis is a famous statue of a boy in going to the toilet in Brussels, Belgium.  Bath in England also has a statue of a very similar looking boy.  Thankfully in Bath however, he is posing on the side of a building as opposed to visiting the bathroom!  If you wish to see this statue, here is the exact location.

Enjoy your Visit to Bath in England

Did you consider Scotland? Read about Edinburgh landmarks and Glasgow landmarks.  Alternatively, how about the Leaning Tower of Pisa in Italy?