Have you ever been to a historic train station converted into a brewery and restaurant?  Did you ever try Leipzig gose beer first brewed in the 18th century?  Bayerischer Bahnhof brewery, beer garden and restaurant is a must see for all when you visit Leipzig.  Read on to learn more about this unique experience. 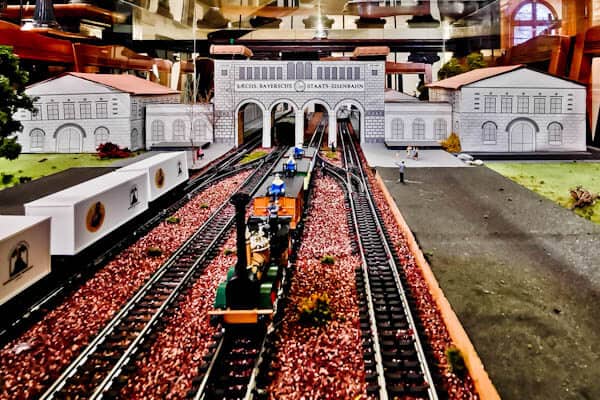 Bayerischer Bahnhof holds the title as the oldest head railway station in the world.  It opened in 1842 and in 1875 alone it received over a million passengers.  Passengers would travel south to Bavaria, Austria as well as Italy.  So how did this important train station become a restaurant?  It was severely damaged during World War II.  Furthermore, it was left in a state of disrepair throughout the period of East Germany. 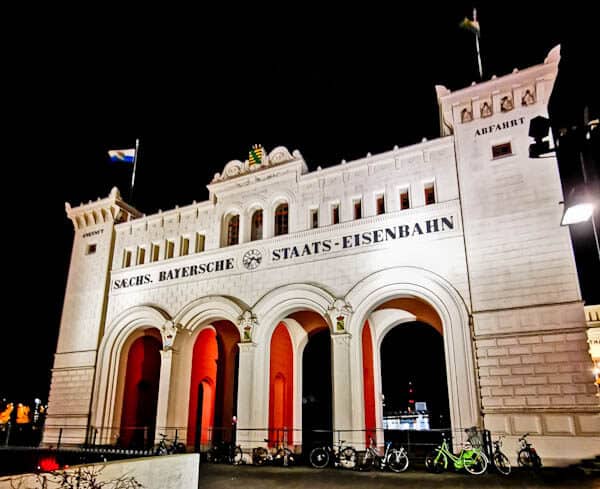 It wasn’t until after the reunification of Germany that restoration began.  Eventually, in the year 2000 Bayerischer Bahnhof was transformed into the brewery and restaurant you see today.  Only the main gates and right hand building remains.  However, this area is huge and not only can you visit for a beer and a meal but you can explore the whole of the former train station.  What’s more, there’s a new S Bahn station located beneath which is also called Bayerischer Bahnhof.  For this reason, it’s incredibly easy to visit from the city center if you don’t want to make the 15 minute walk. 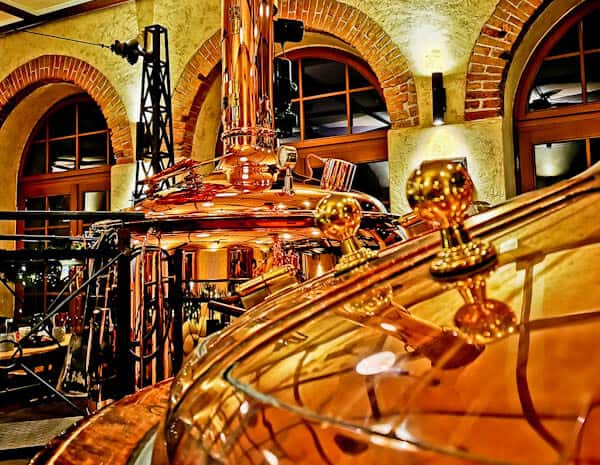 Have you ever been to a restaurant or bar which features it’s very own brewery?  You can complement your meal with freshly brewed beers made onsite.  There are a few different types of beers brewed onsite depending on the season.  However, I recommend the Leipzig specialty called gose which I’ll get to later.  Lastly, if you’re visiting as a group, as well as booking a table you could also request a quick brewery tour.  Even if you’re visiting alone or as a small party, ask to meet the master brewer who may show you around. 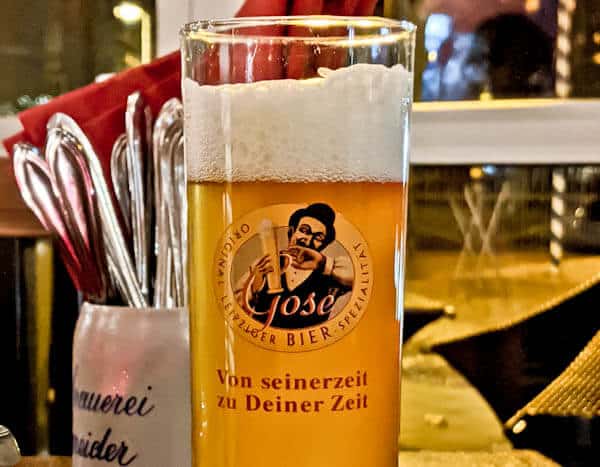 Gose is a type of beer which dates back to 1738.  To put that into perspective, the famous pilsner you drink today dates back to 1842.  I’m sure I don’t need to give you a reason to try this on your visit but here is a little information.  Gose beer has some unique ingredients which are lactic acid, coriander and salt.  As a result, it can be very refreshing on a hot day in the beer garden.  What’s my view on Leipzig gose beer?  If I could buy a pint in England I certainly would! 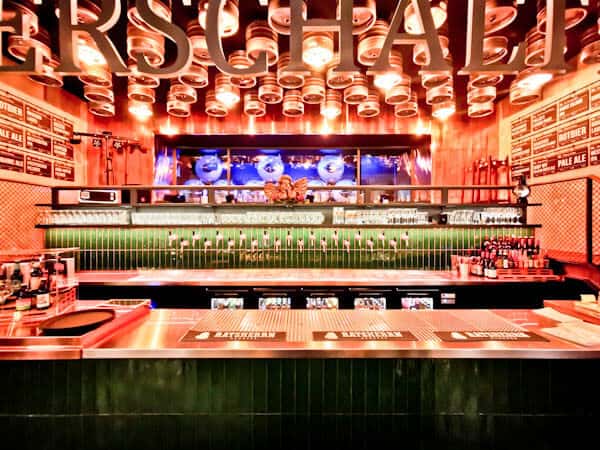 You can not only buy locally brewed beers but also beers from around Germany and the Europe.  To be honest, as a visitor to Germany I would stick with the locally brewed beers as you won’t find these anywhere else in the world.  And if you do, you won’t be drinking them at their source.  Take your time to admire the architecture of the bar.  Once upon a time this is where millions of passengers bought their train tickets.  Nowadays, it’s millions of customers buying fresh beers! 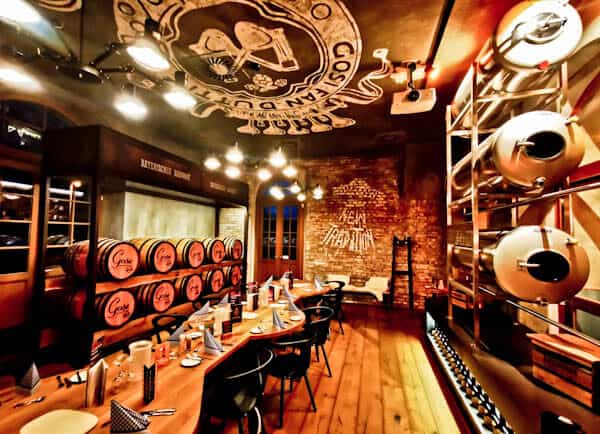 Traveling as a group?  You can book your own private dining room at Bayerischer Bahnhof. 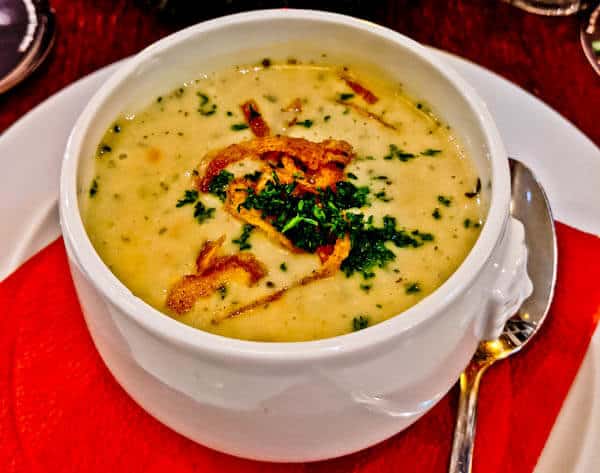 I started with a tradition German potato soup.  This is a delicious soup which you must try when you visit Leipzig.  In addition, there is also a selection of other soups as well as salads. 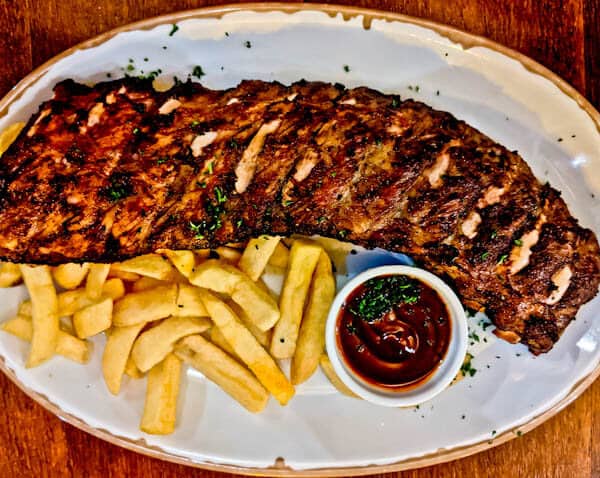 For main course I chose tender spare ribs with chips and BBQ sauce.  As you would imagine, this complements the beer well.  Other highlights include, hot wings, rump steak, escalope, pork fillets and also a hunters feast.  If you don’t fancy meat, there’s also pasta or salad available.  I must add that the prices are very reasonable, complemented by large portions sizes.  As a result of the wide range of delicious menu items, you must visit Bayerischer Bahnhof at least twice! 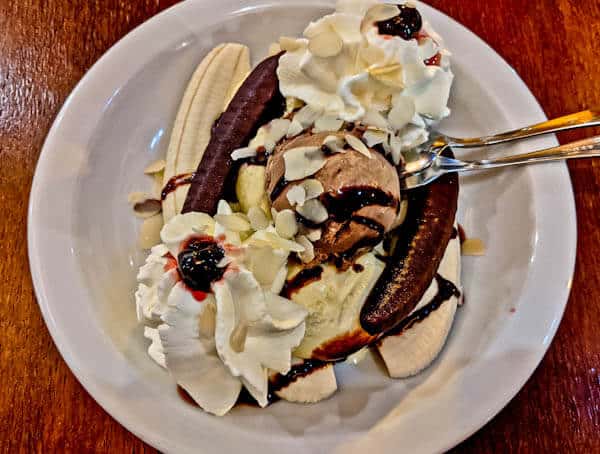 You may not have room for dessert after a large meal and beer.  However, if you do there are several sweets to choose from.  Needless to say, I chose a banana split.

Enjoy your Visit to Bayerischer Bahnhof

I really can’t think of a reason not to visit Bayerischer Bahnhof.  You’ll find the best German beer at its source.  Complementing this is the homely restaurant serving huge plates of good food at fair prices.  To top this all off, the staff are welcoming, friendly and also speak good English.  Visiting to see the historic train station?  You’re welcome to freely explore the interior and view the model train set.  As a matter of fact, I even recommend you visit the guest bathrooms which have a 19th century first class lounge feel to them!