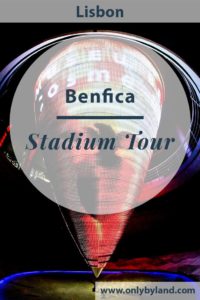 I took a museum and stadium tour.  It’s possible to only visit the stadium but I’d recommend seeing the museum too. 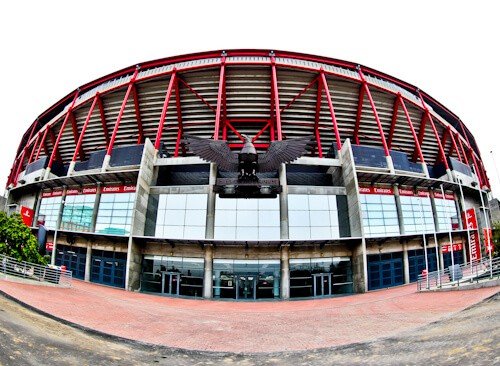 The Estadio Da Luz stadium is located on the blue line of the Lisbon metro.  You can arrive at either Alto Dos Moinhos or Luz stations and it’s a short walk to the stadium.

I was staying at the 1908 Lisboa hotel close to the Intendente station so had one change at Baixa Chiado.  It takes about  15-20 minutes to get to the stadium by metro. 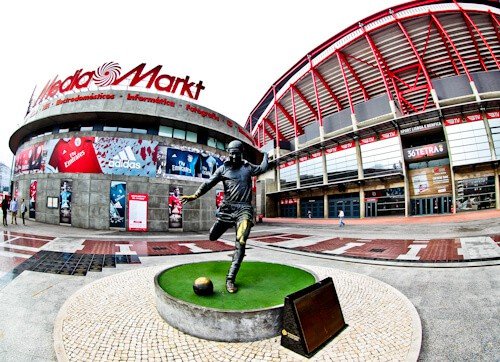 You buy your stadium tour ticket in the very impressive club shop.  There are snack bars and other kiosks around the shop too.  Outside the club shop complex is a statue of the Benfica and Portuguese legend Eusebio.  If you don’t know who he is you’ll learn about him in the museum.  He is still regarded to be the best Portuguese player in history despite the recent success of Cristiano Ronaldo. 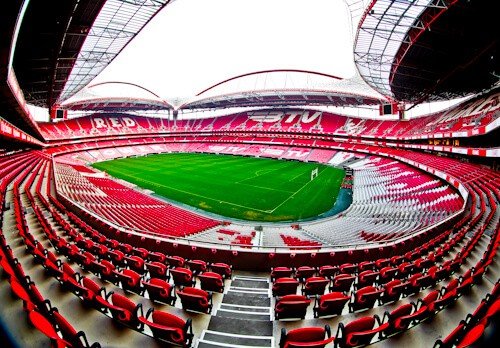 In the stadium you are taken to various vantage points. This will allow you to take photos of different angles of the stadium.  You are given plenty of time to do this and don’t be afraid to ask your guide to take your picture.  The stadium is very impressive and very similar looking to the Emirates in London (Arsenal FC).  Estadio da Luz has a capacity of over 65,000 people and is the largest stadium in Portugal. 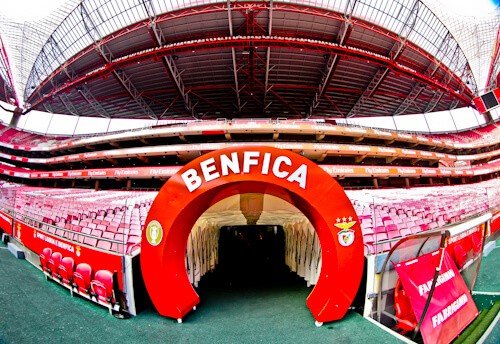 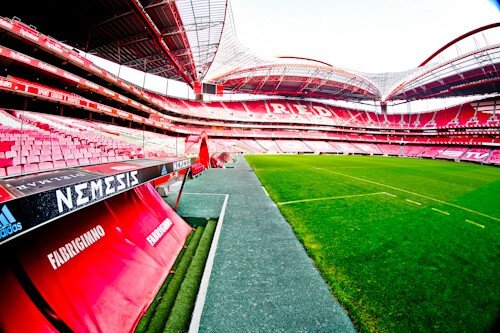 The dugouts are located on each side of the players tunnel.  The home dugout is on the right as you walk out.  An interesting fact about the dugouts is that the legendary Portuguese manager Jose Mourinho has sat on both sides.  He was the Benfica manager for 2 months.  He has since returned with teams such as Porto and Manchester United to sit in the away dugout. 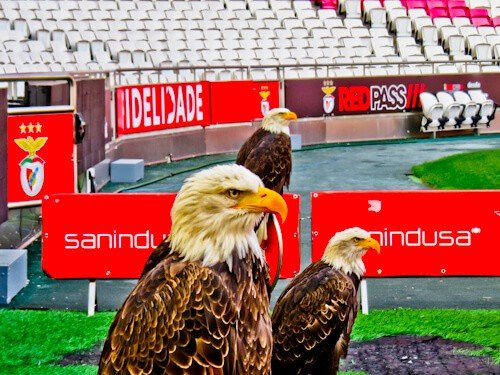 The nickname and symbol of Benfica is an eagle.  You’ll see an eagle on their club logo.  Before every Benfica game an eagle will fly around the stadium.  On the stadium tour you will see the Benfica eagles.  If you’re taking a stadium tour with kids I am sure this will be their favorite part.

There’s an interesting story that one Benfica fan had one of the Benfica eagles as a guest of honor at his wedding.  I hope his wife was a Benfica fan too! 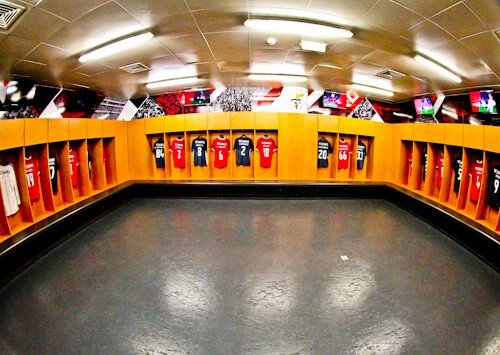 The away team dressing rooms are impressive compared to those of Newcastle and Liverpool.  When English teams come play in Benfica they must be surprised how fair the facilities are.  The decoration of the dressing rooms however let you know who you are playing against.  You will see pictures of the team eagle, Benfica legends and lots of red. 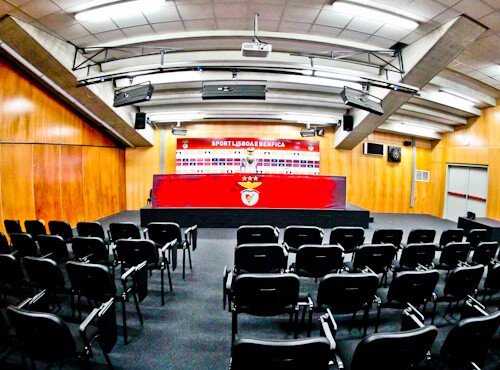 In the Benfica press room you can sit where the manager does for press conferences.  On this stadium tour you are treated to being able to sit there with the Portuguese championship trophy.  A picture here holding the trophy will go well on your Facebook or Instagram feed.  For those visiting as a family it will make a wonderful family memory.

For the Euro 2004 cup final and 2014 Champions League final the size of the press room increased due to media attention.  They increase the size by removing the walls on the left. 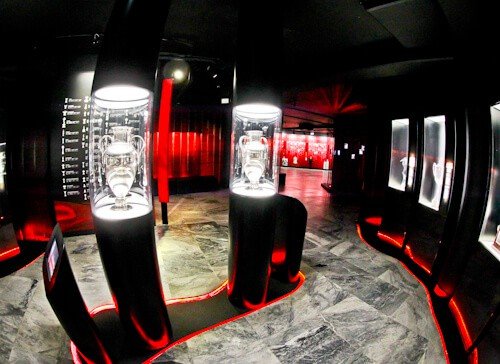 Benfica has the most interesting football museum I have ever been in.  Not only do you learn about Benfica and its history but you learn about what has been happening in the city of Lisbon as well.  You’ll see a world map stating all the countries that Benfica have played in.  There is another map stating all the foreigners by country who have played for Benfica.  You can search for your country and see which players have played for Benfica.

There is a Eusebio section to the museum.  The more I read and learn about him, the more I respect him.  Benfica won back to back European cups in the 60’s when Eusebio was a player. You’ll see replicas of these trophies on display in the museum (above). 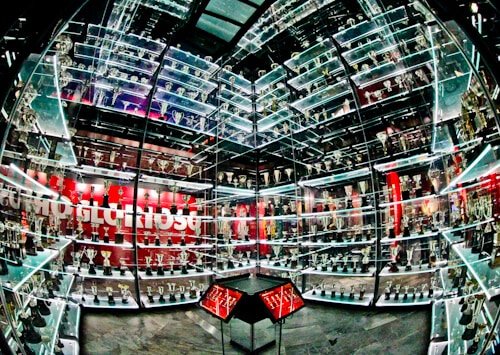 Benfica have one of the most impressive trophy cabinets you’ll ever see.  Walking into the trophy cabinet is worth the museum entry fee in itself!  What is scary is that it’s probably only a fraction of the trophies they have in their collection.  Throughout the museum you’ll see lots of unique trophies, some of them are probably bigger than your kids. 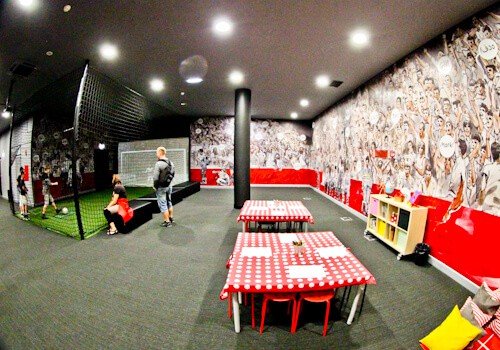 Kids will love to see the eagles of Benfica and of course the stadium where so many greats have played.  In the museum there are lots of interactive experiences for them to learn about the club and city.  There is an area where they can take a penalty against a virtual goalkeeper which I’m sure will keep them occupied for quite some time.  For the younger ones there is a section where they can sit and play. 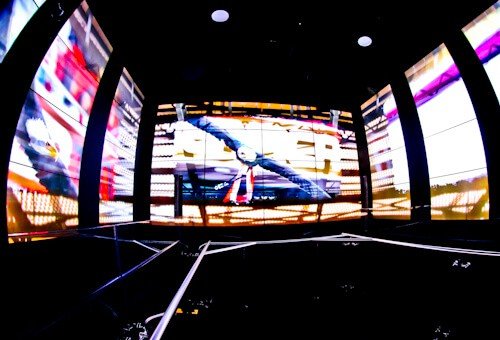 There is a 7 minute elevator ride which lifts you up through the 3 floors of the museum.  You are surrounded by movie screens.  The movie really captures the atmosphere of the stadium.  As you reach the top you see the eagle souring around the pitch before a game.  On the lower levels are the fans and of course the players on the pitch.

Enjoy your Benfica stadium tour.  Estadio da Luz is one of the best stadiums in the world.  This is complimented by friendly guides, good organisation and presentation.  The only way you could have a better experience than a stadium tour is if you were to watch a live game.  Check the Estadio da Luz fixtures before planning your visit.

Where to stay in Lisbon, also what to see in Lisbon and Sintra.  Furthermore, why not take a Sporting Lisbon Stadium Tour.