7 Ways to Find the Best Deals When Booking a Flight

We all love a bargain – especially when it comes to flights. And, with the skyrocketing costs of air travel – flight prices are up 25%, outpacing inflation – it’s more important than ever to find a good deal.

Yes, flight search engines are a great tool to use.  But with constant price fluctuations, there’s no guarantee of striking gold.  There are, however, some clever little hacks you can use when hoping to save money on your next getaway.

When I say flexible, I mean both in terms of time and location.

Flight prices vary massively in terms of the month, day of the week and hour of the day.  An early morning, late-night or midweek flight has the potential to be extremely cheap.  Just make sure the cost of getting to and from the airport extra early or late doesn’t override the saving itself.

In terms of location, going against the grain could be a great way to find a bargain.  Visit major cities during the off-season.  Alternatively, skip the major cities and seek out those lesser-known gems.  You’ll save money and discover new cultures.

Airlines are often charged more for using busier airports.  The upshot is that large international airports often have more expensive flights for certain destinations.  That’s why it’s always worth looking a little further afield to those airports on the outskirts of major cities (Stansted in London, Reus in Barcelona, etc.).  You might just find a bargain or two.

Of course, the amount of time and money it could cost might make it not worth your while – you might need to rent a car, take a long train journey at 4 am, or shell out for a hotel for an extra night.  That aside, if the journey times and prices add up, you could have a serious bargain on your hands.

Ask any travel hacker and they’ll tell you that layover routes can be a goldmine when it comes to saving cash on long-haul flights.  There can be a lot of work involved – checking various airlines and piecing together your route takes plenty of dedication – but if you end up with a deal, it could be time well spent.

It should be said, though, that there’s a fair amount of risk involved if you’re travelling with two or more airlines when there isn’t a flight agreement in place.  That’s because if things go wrong (such as flight delays causing a missed connection), you’re typically left on your own to bear costs and figure out what to do next.  Also, gate-to-gate times aren’t always available and baggage reclaims and rechecks slow everything down.  This is why the following tip makes perfect sense…

Virtual interlining (VI) takes self-connected travel to a whole new level.  Instead of searching for non-direct flights offered by the same airline, you can expand your search to any flight combination possible to get to your final destination under the best deal.

So, instead of manually sifting through flights from different airlines – nobody’s idea of fun – you can use a VI search-and-book platform like Volario, which automatically scans and shows you all VI flight options while giving you automated baggage check-throughs and telling you exactly how long it takes to get from gate to gate between connections.  In a nutshell, it’s a better way to check layover flight options while also ensuring peace of mind.

Budget airlines can be your best friend when it comes to scoring cheap flights.  But certain budget carriers (come on, we all know who they are) have taken up the tactic of using hidden extra costs at the booking stage.

Sneaky, I know. But lots of people fall for it.  So, don’t get caught out and always remember to check and account for those hidden baggage fees.  If possible, pack smart and travel only with the essentials.  That way, you take advantage of the cheap flights without paying over the odds for extra luggage.

Airfares are dictated by complex algorithms, with a long list of factors contributing to the ebb and flow of pricing.  You could spend hour after hour obsessively watching your favourite flight search engine, waiting for the deal of the century.  Or, you could set up a price alert and get out and enjoy life, all the while waiting for that ‘ping’ when the deal shows up.

You can even customise your alerts – track a specific flight for a specific time, or set broader search parameters if you’re open and flexible.

Let’s say Paris and London are both on your bucket list.  You’re thinking of hitting up Paris in the spring, then doing London in late summer.  That’s four tickets in total, making a sizeable dent in your holiday budget.

Instead, you could take a multi-city break, with a triangular trip that takes in the romance of Paris and the majesty of London, all in the space of a few days.  Three flights instead of four (or maybe even two, if you can find affordable alternative travel) will have a positive impact on your wallet, not to mention the environment.

The price of air travel might be higher than ever, but there are still plenty of opportunities to grab yourself a bargain, from the common sense of staying flexible to the modern ingenuity of virtual interlining. Happy travelling!

Yavuz is the CEO & Co-Founder of the travel tech companies Airsiders and Volario.  He has over 5 years of experience in the tech and travel industry, building innovative solutions to improve the end-to-end passenger experience.  His vision is to create a future where travel is smart, seamless and easy. 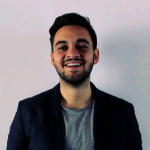