Brescia is a hidden gem in Italy which has a couple of UNESCO sites.  Things to do in Brescia Italy include;

The best place to stay in Brescia is Centro Paolo VI.  This is a palace and the prices are amazing value.  It would make sense to base yourself in a palace in Brescia and take day trips to Milan, Lake Garda as well as Verona. 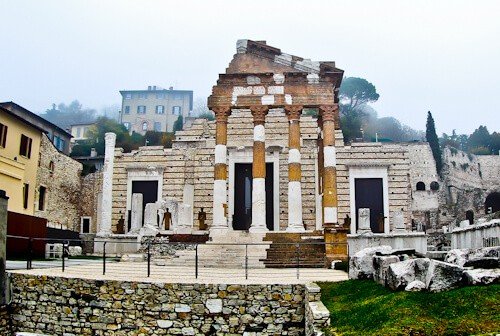 The Capitolium is what remains of the main temple of the ancient Roman city of Brixia (modern day Brescia).  The temple is close to 2,000 years old.  There’s a YouTube video on how the Capitolium originally looked.  You may go inside the temple and view ancient Roman inscriptions and artifacts. 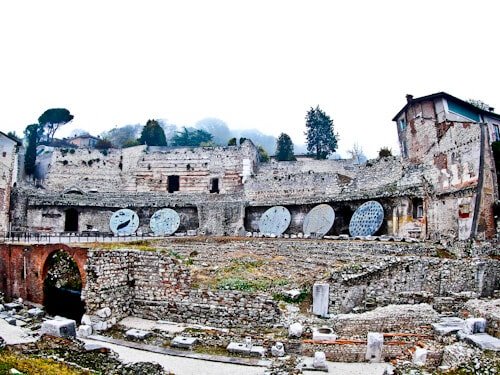 Alongside the Capitolium temple are ruins of the Roman theater of Brexia.  This Roman theater is the second largest in northern Italy.  It’s around 2000 years old and could once hold 15,000 spectators. 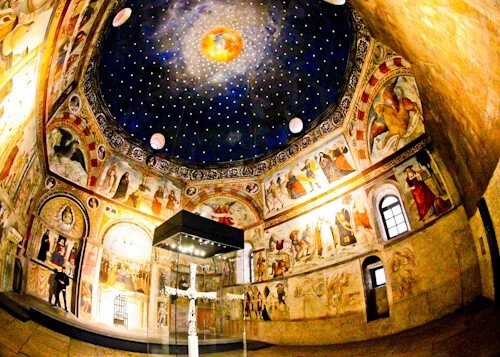 Santa Maria in Soltario is located within the Santa Giulia museum.  The church is of Romanesque architecture and dates back to the 12th century.  It was the chapel of the nuns.  The upper section of the church (above) was used for important ceremonies.  It has unique frescoes which resemble a starry night on the roof.  The frescoes are by Italian painter Floriano Ferramola.  In the center of the upper church is a huge cross.  This was the cross of King Desiderius.  He was the the last king of the Lombard Kingdom.  The cross is decorated with gems and ornaments from before the 8th century. 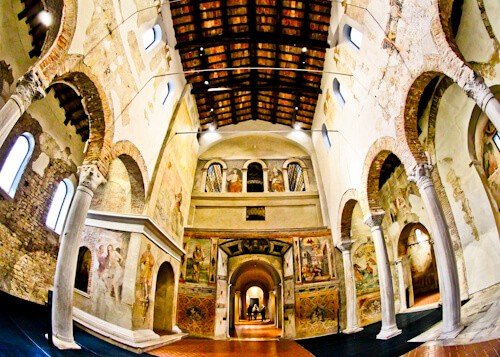 Located in the Santa Giulia museum is the church of San Salvatore.  This church is of Medieval architecture.  It was founded by King Desiderius in the 8th century and dedicated to the holy saviour (San Salvatore).  He brought the remains of martyr Saint Julia here which is who the museum complex is named after. 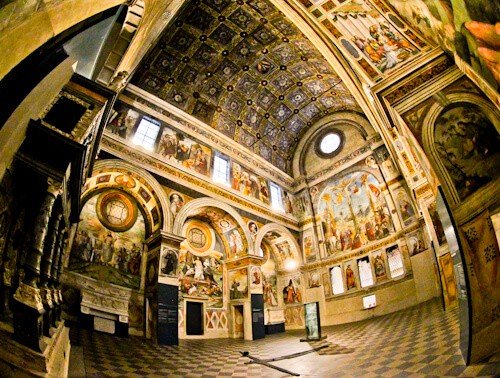 Connected to the church of San Salvatore is the nun’s choir.  Nun’s would take part in religious functions from this room, they were hidden from view.  This chamber was built in the 15th century.  It’s decorated with frescoes painted by Italian artists, Floriano Ferramola and Paolo da Caylina the Younger. 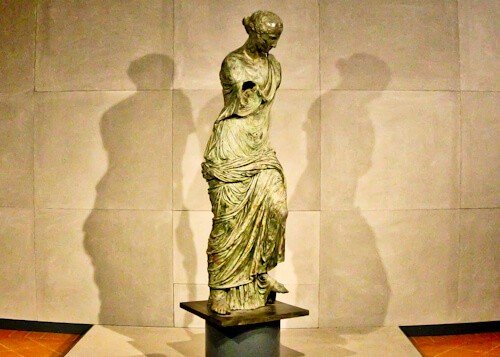 The Winged Victory is one of the masterpieces at Santa Giulia museum.  The statue dates back to the first century and is made from bronze.  Originally the statue had arms and wings.  She was holding a shield written ‘res gestae’.  The Romans would portray the goddess of victory with these words.  The Winged Victory is an important part of Roman history and can also be seen on Roman coins.  The most well known version of The Winged Victory is located in the Louvre, Paris.

Old and new Cathedrals of Brescia 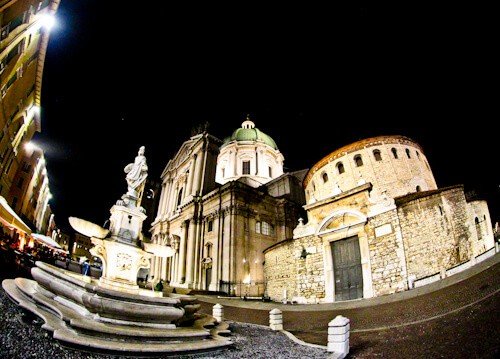 Brescia has an old and new Cathedral.  They’re conveniently located side by side in the center of the city.  The new cathedral was completed in the 19th century.  At 80 meters in height, it’s one of the tallest in Italy.  Inside there is a monument to a former Pope who hailed from Brescia.  Pope Paul VI was the Pope during the 60’s and 70’s.  The old cathedral dates back to the 11 century.  It’s of Romanesque architecture.  You won’t see many round shaped churches around the world.  The square which these are located in is lined with restaurants.  You can sit out and enjoy a coffee or a meal whilst enjoying the unique view. 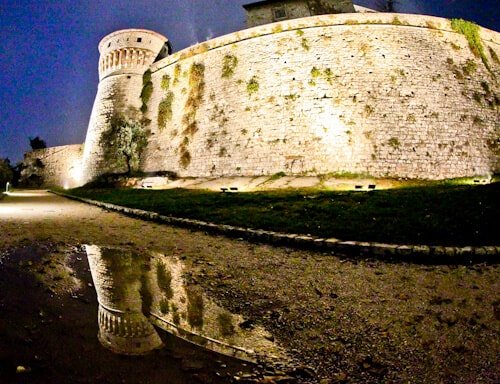 A short walk uphill from Brescia is the Medieval Brescia castle.  Entry to the castle grounds is free.  There are tunnels, gardens, a drawbridge, fortifications and castle towers.  You could spend a whole afternoon taking photos around the castle grounds.  2 museums are located in the grounds.  An Arms museum and the Risorgimento Museum.  The Risorgimento Museum is about the unification of Italy in the 19th century.  From the castle you get wonderful panoramic views of the city of Brescia. 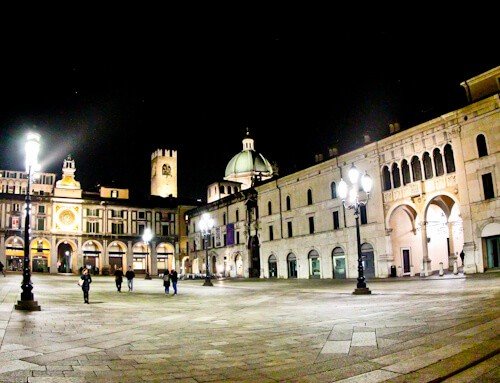 Loggia Square is surrounded by Venetian style buildings.  At one end of the square is the Loggia Palace.  Opposite the Loggia palace is the Brescia clock tower (Torre dell’Orologio, above left).  The antique clock dates back to 1546. Another notable building on the square is Monte di Pietà Vecchio (above right).  This is beautiful plaza, similar to St Mark’s Square in Venice.  One major difference is there are not thousands of tourists.  At certain points of the day it’s likely you’ll have Loggia Square to yourself. 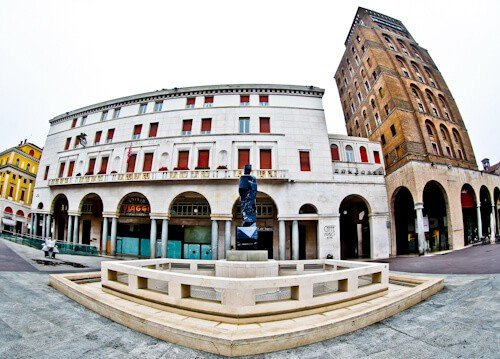 Victory Square was created in 1932.  It was built on what was a run down part of the city.  Although not as beautiful as the nearby Loggia Square, it’s still worth a walk through. 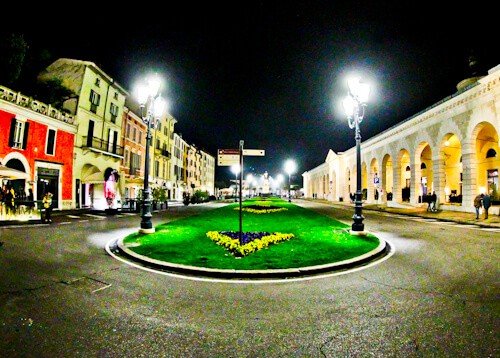 Piazzale Arnaldo is a picturesque square surrounded by colorful houses.  There are lots of cafes and restaurants surrounding the square.  It’s a good place to enjoy the nightlife in Brescia.  The drink of choice in Brescia is pirlo.  Pirlo is a mix of white wine, campari and soda water.  The drink is served with ice.  Pirlo is also the surname of the famous Italian footballer who played for AC Milan and Juventus. 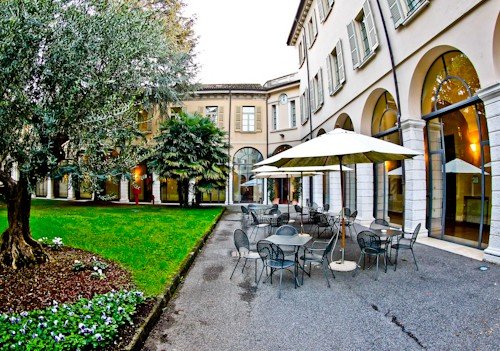 Centro Paolo VI is a hotel palace in the center of Brescia.  In the palace grounds is a garden which is perfect to enjoy your breakfast in.  Throughout the day you can do as the Italians do, enjoy an espresso or pirlo in the garden.  If it’s hot you can take a little shade under an olive tree.  The palace houses a private church with famous artwork.  In the palace, there are chandeliers, red carpets and rooms with frescoes.  You won’t have a problem filling up your Instagram feed.  Brescia should be the place where you live like royalty for a few days.  What’s the price to stay in a palace?  It’s lower than an average hotel in nearby Milan.  Check out the Centro Paolo VI review. 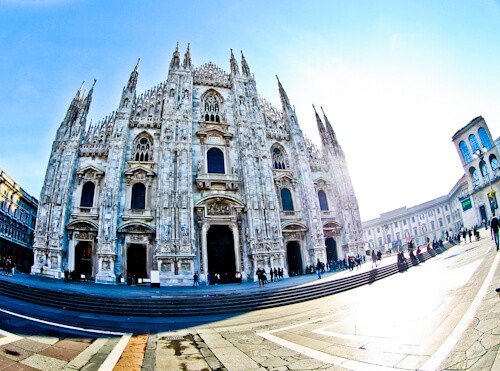 Brescia is well connected to other cities by train.  Milan is less than 40 minutes away to the west.  Lake Garda is around 20 minutes to the east.  Verona is less than an hour away.  Brescia is also served by the Flixbus.  The bus station is located in the center of the city, nearby the train station.  It’s possible to make day trips with Flixbus to Lake Garda and Verona.

How to get from Brescia to Verona by bus 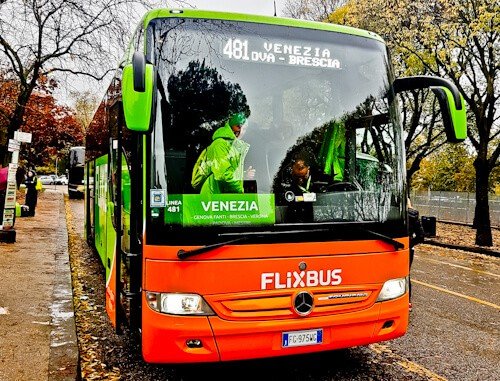 Flixbus have regular buses between Brescia and Verona.  The journey takes 1 hour and costs as little as €5 one way.  As always with Flixbus, you ride on a clean and modern bus.  There is free WiFi and you can charge your phone / tablet.

Verona to Florence by bus