Firstly, Burgos Cathedral is one of the best examples of Gothic architecture in all of Spain and Europe.  If that’s not a good enough reason to visit, wait until you read about the treasures stored inside.  Here are 15 reasons to visit Burgos cathedral; 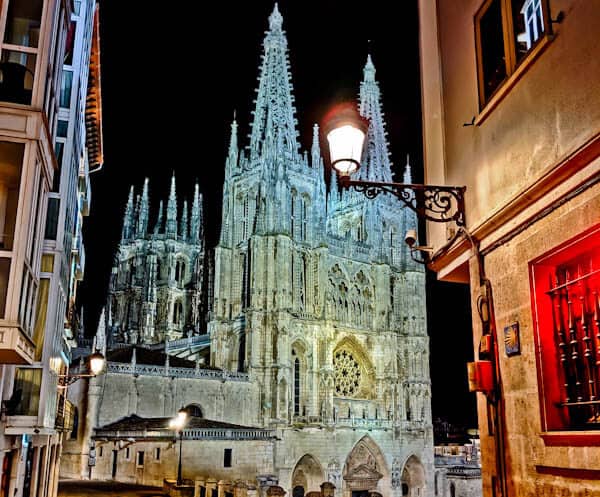 Burgos Cathedral is often referred to as the best example of Gothic architecture in the whole of Spain.  However, I’m sure those who’ve visited Seville Cathedral could argue otherwise.  None the less, you cannot argue that Burgos cathedral is the stand out building of this city.  For a building of this size, the attention to detail in the architecture is impressive.  I recommend you take your time to explore Burgos Cathedral from the exterior before you enter the building itself.  One side of the cathedral is surrounded with a huge plaza which is perfect for viewing.  Alternatively, there’s a small hill at the other side which gives excellent aerial views. 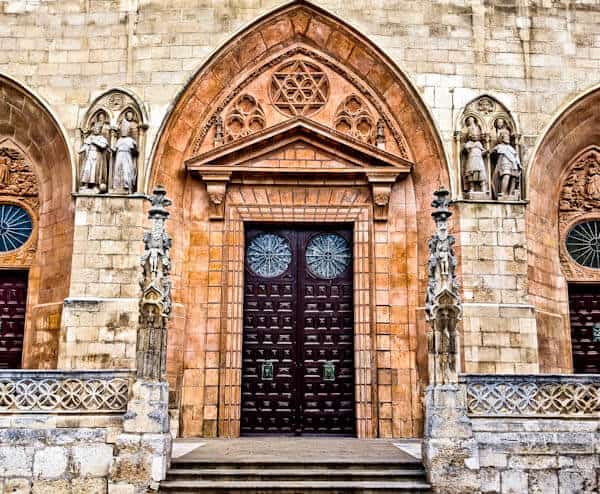 Quite possible the most impressive parts of Burgos Cathedral are its huge doors and wall decorations.  As well as the Gothic elements, of course they feature several religious elements too.  Namely, Jesus and his twelve apostles (including St Philip and St John).  Finally, did you know Burgos Cathedral is devoted to the Virgin Mary? 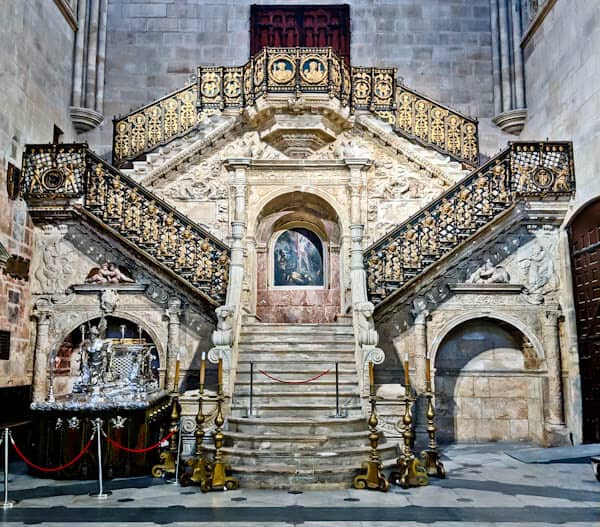 The Golden Staircase is a piece of work by Spanish Renaissance architect, Diego de Siloe.  He’s has several famous works throughout Spain including the Cathedral of Granada as well as Holy Chapel of the Savior of the World in Ubeda.  In addition, he’s created impressive works in Peru and also the Guadalajara Cathedral in Mexico.  The Golden Staircase was built during the 16th century with inspiration from the Italian Renaissance.  Lastly, today, the Golden Staircase has become a top Instagram spot in Burgos. 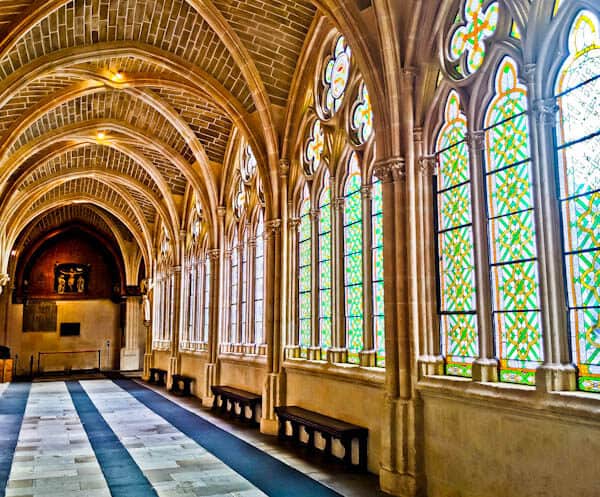 Cloisters are always photogenic, no matter where you are.  What makes the cloisters at Burgos Cathedral unique is the fact they’re illuminated through different colored stained glass windows.  Did you know there are Cloisters in Glasgow, Scotland and also in Conciergerie, Paris. 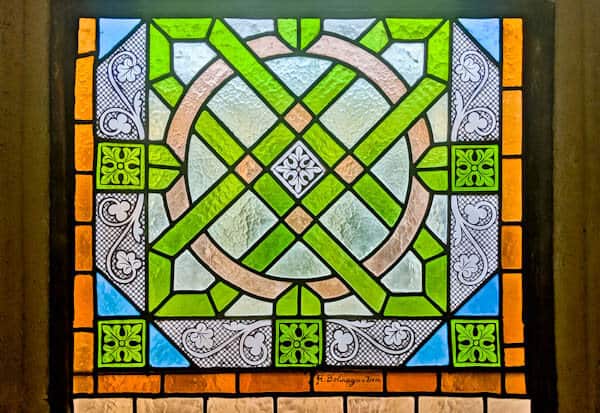 Be sure to view the different colored stained glass windows which surround the Cloisters.  As a matter of fact if you visit when the sun is either low in the morning or late afternoon, you can witness some spectacular lighting.  For the ultimate in Stained Glass window lighting, I recommend you visit Sainte Chapelle, Paris. 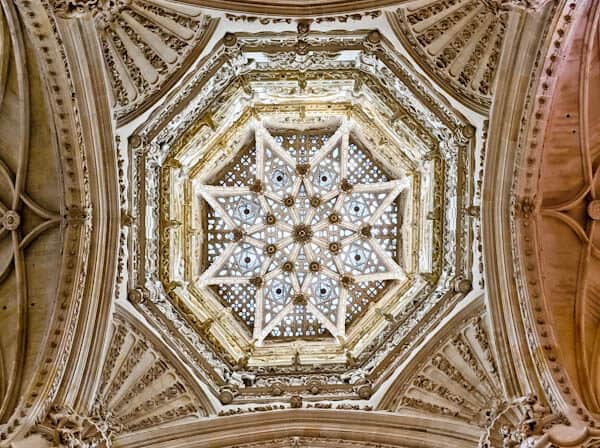 Burgos Cathedral features a main dome which is arguably the most beautiful from the Spanish Renaissance period.  Look up, not only admire the intricate detail but also to wonder how many man hours it took to create such beauty.  As a matter or fact, King Philip II of Spain said the work was more like that of angels than of humans.  Yes, you’re standing where Spanish royalty has stood! 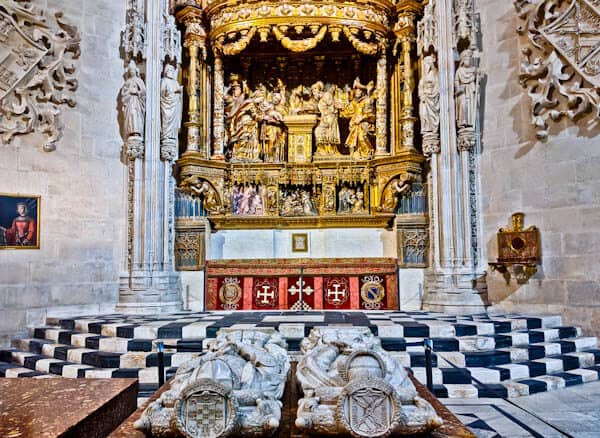 The Constable Chapel is often described as a cathedral inside a cathedral.  As a result, a Burgos Cathedral visit is excellent value for money as you get two for the price of one.  I share a picture of the altar, tombs as well as artwork but like the main cathedral itself, Constable Chapel features stunning ceiling artwork.  Furthermore, the central altarpiece is also a piece by Diego de Siloe, the same architect as the Golden Staircase.  Lastly, the tombs are somewhat reminiscent of what you’ll find in the Cathedral of Saint Denis, Paris. 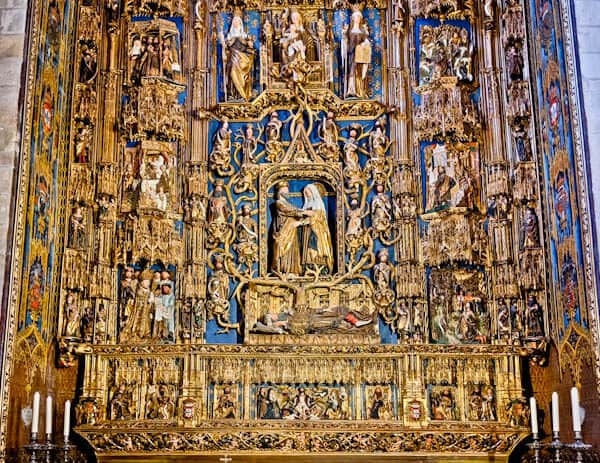 The Chapel of the Conception perhaps holds the most impressive altarpiece inside Burgos Cathedral.  This is in fact one of the best examples of late Gothic sculptures in the world.  Those who pay attention to detail could spend hours admiring this huge masterpiece.  Its creator was Flemish sculptor, Gil de Siloe. 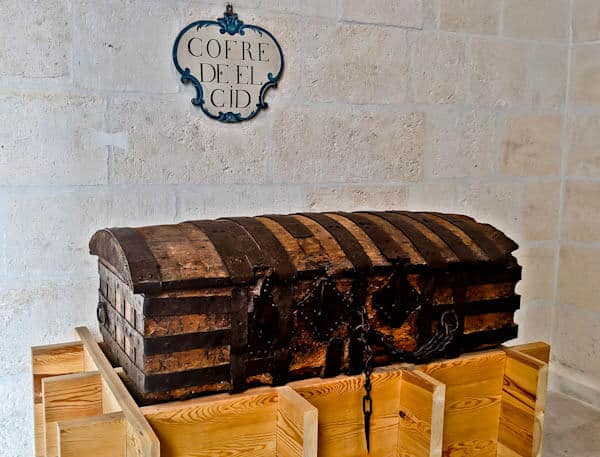 One of the main entrances to the old city of Burgos features a huge statue of El Cid.  What’s more, El Cid was buried in Burgos Cathedral.  Even more significant is the fact that there’s also a Camino del Cid with the final destination as Burgos Cathedral.  But, who was El Cid and why is he so important to Burgos?  He’s a famous medieval warlord respected by both the Spanish and the Moors.  As a matter of fact, El Cid is arabic for ‘The Lord’.  Read more about the history and legacy of El Cid. 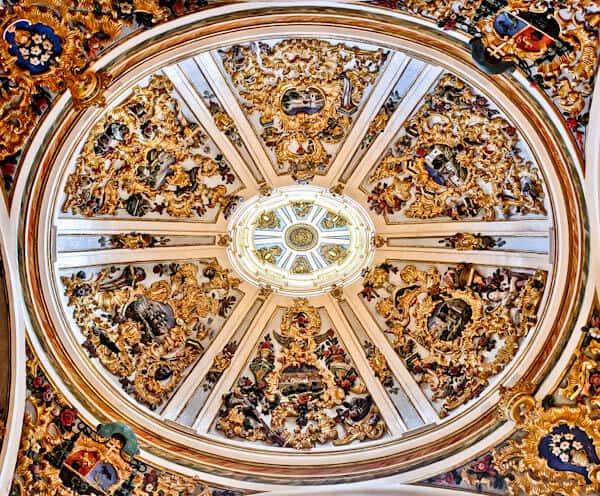 The main Sacristy was renovated in the 18th century therefore it has a newer look than most of the cathedral.  None the less, it’s still a majestic room and again those who pay attention to detail will be rewarded by looking up to the ceiling.  In contrast to the Gothic art throughout the cathedral, the main Sacristy feature late Baroque art.

11. Chapel of the Nativity of Virgin Mary 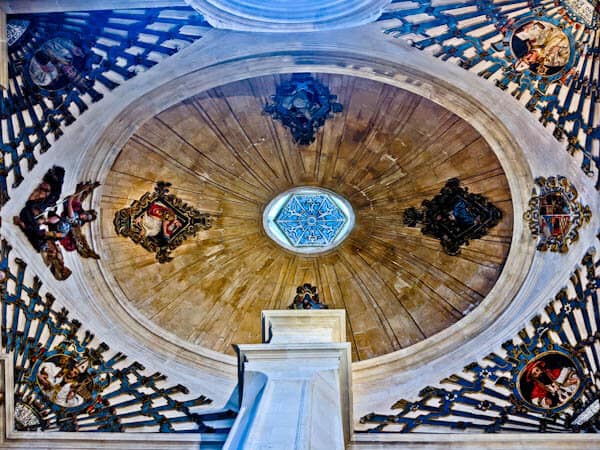 If I’ve not convinced you to visit Burgos Cathdral with the ceiling images I’ve shared, then this ceiling may be the one to persuade you.  Not only is the ceiling a stunning example of Spanish Renaissance art but also the whole room is.  You can appreciate the altarpiece, the artwork and also the detailed Walnut choir stalls.  On the theme of the Nativity in Mary, did you know you can visit the birthplace of Mary in Jerusalem? 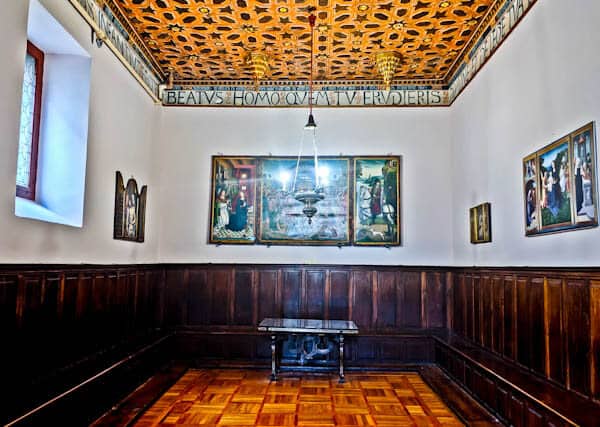 There are 2 things which stand out in the Chapter Room.  Firstly, the roof features Mudejar artwork.  Mudejar art is influenced by the Moorish.  Secondly, the window of the Chapter Room gives a stunning view of the colorful streets of Burgos. 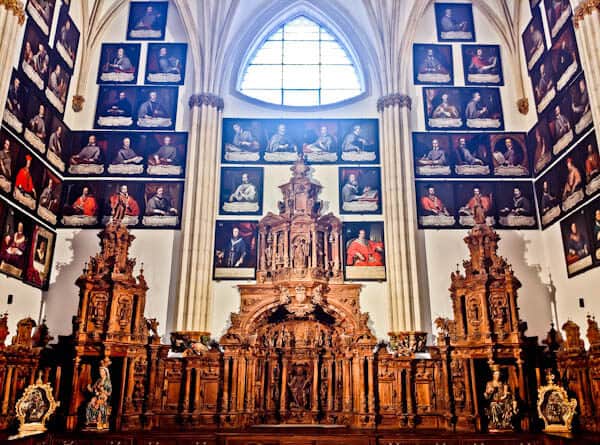 With all the paintings, the Chapel of St Catherine looks like something from a Harry Potter movie.  If you’re in here alone, you may get an eerie feeling of eyes following you! 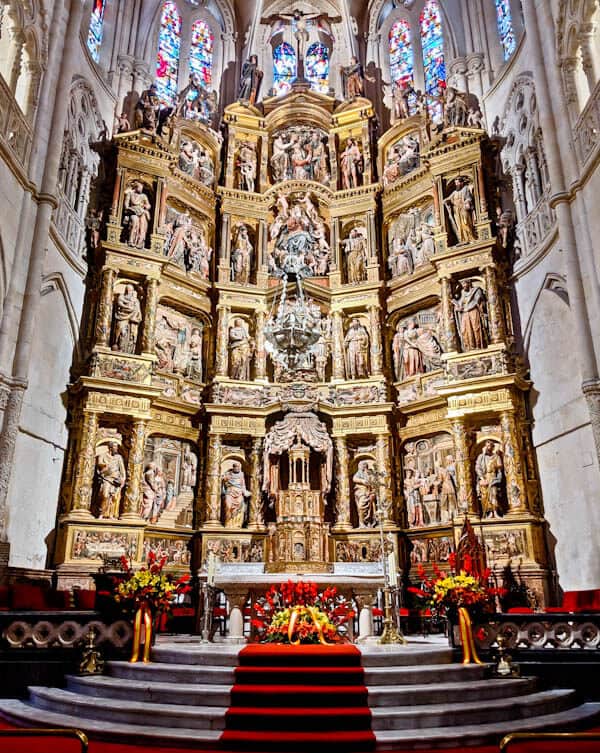 In a cathedral dedicated to the Virgin Mary, of course the main altarpiece features Our Lady.  What stands this altarpiece apart from the several others in the cathedral is the fact that it’s surrounded by stained glass windows.  As a result it receives much more natural and colorful light.  In addition, the dome created by angels stands above it. 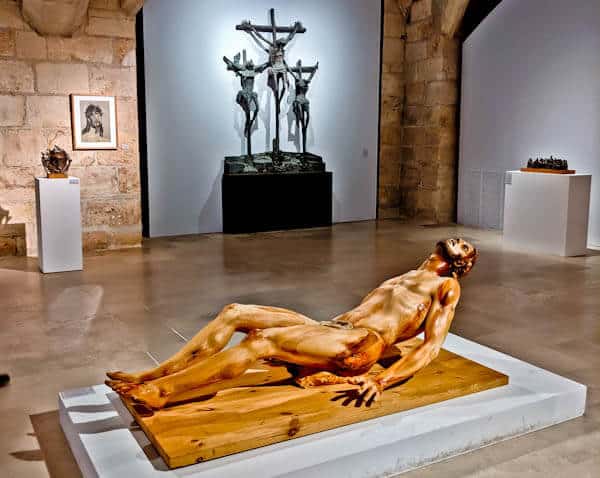 The Cathedral Museum features both detailed artwork as well as several huge Flemish tapestries.  If you haven’t seen enough altarpieces yet, then you can admire another one dedicated to St James the Apostle, aka Santiago.

With such beauty inside Burgos Cathedral the rewards fully justify the entrance fee.  Be sure to look up and admire the intricate artwork of the ceilings.  Most importantly, appreciate the different periods of architecture on display including, Gothic, Renaissance, Baroque as well as Islamic.

Visiting the north of Spain?  Why not visit Bilbao or Comillas?