It’s possible to take a stadium tour however, they don’t run to a schedule.  For this reason, you must organise a stadium tour in advance.  The cost is £35 for up to 6 people therefore it’s best to visit with friends. 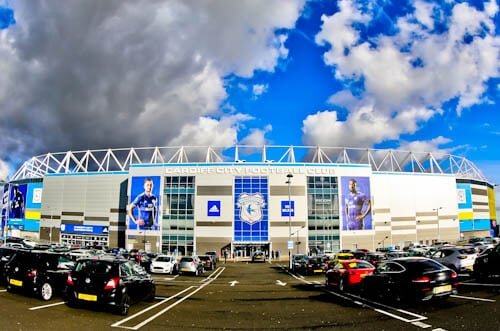 Cardiff City Stadium is in western Cardiff, less than 2 km from Cardiff Central.  You can easily walk, alternatively, take the train all the way to Ninian Park station which is a 5 minute walk away.  If you’re arriving by car, the A4232 runs beside it.  For this reason, when Cardiff City aren’t playing it’s a popular park and ride location.

When you organise your tour online, you’ll be given a time to start the tour.  The meeting point is main reception of the Grand Stand.  Inside is a waiting area beside a small trophy cabinet. 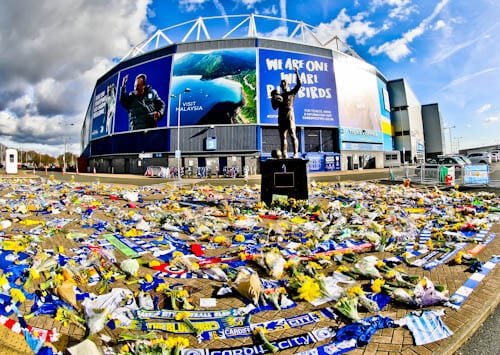 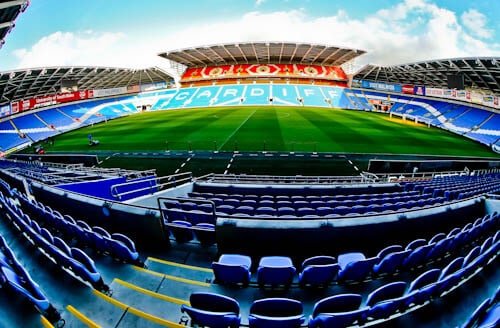 The stadium has a capacity of 33,280 which is the second largest in Wales after the Principality Stadium.  Cardiff City Stadium is home of both the Welsh national football team as well as Cardiff City FC.  It opened in 2009 and replaced Ninian Park.  The first game played here was Cardiff City against Celtic which finished 0-0.  When Wales first played here they beat Scotland 3-0.  However, the most famous game to be played here was the UEFA Super Cup between Seville and Real Madrid.  Lastly, concerts are also performed here with legends such as Rod Stewart and Bon Jovi past performers. 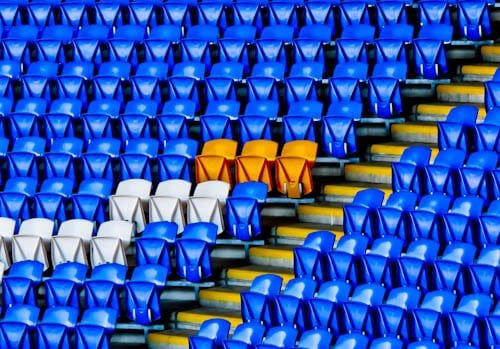 Can you spot the yellow seats in the stadium?  Riverside AFC wore yellow and this is the team which went on to form Cardiff City. 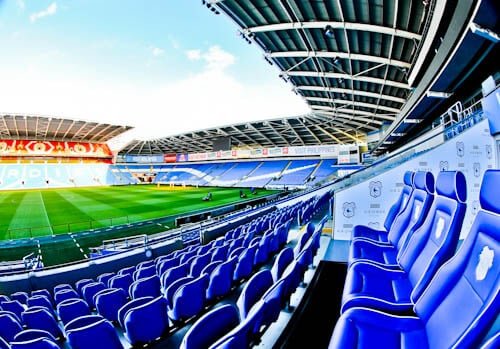 As part of the stadium tour you’ll visit the directors box.  It’s debatable whether this is the best view in the stadium but what’s certain is that the seats are certainly the most comfortable.  You’re welcome to sit where the owner, Vincent Tan sits. 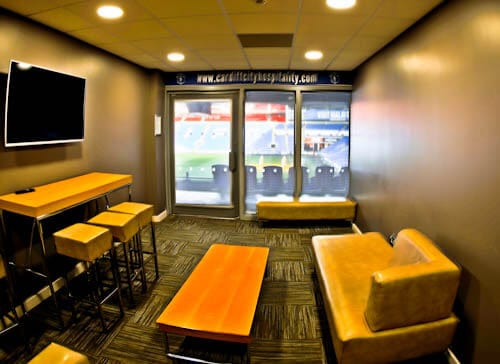 What is a VIP Cardiff City experience like?  As part of the tour you’ll discover exactly that.  As a matter of fact, you’ll visit an executive box as well as see what the view is like from their seats. 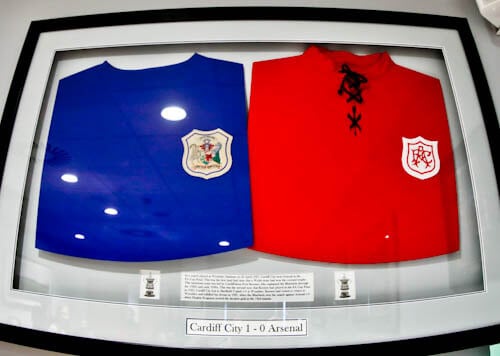 In 1927 Cardiff City became the first non English team to win the FA Cup.  To this day, no other team outside England has ever won the FA Cup.  They beat Arsenal 1-0 in the final at the old Wembley Stadium.  You will see memorabilia from this historic victory around the stadium.  Original shirts from this game are on display in the directors boardroom. 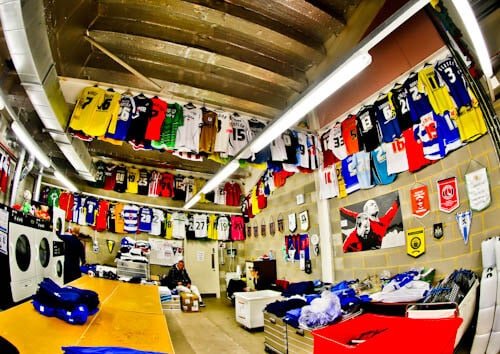 Of all the stadium tours around the world, Cardiff City is the only one which invites you to the kit room.  And what a kit room it is!  Did you ever wonder what happened to the shirts players exchange at the end of a game?  At least some of them are put on display in the kit room.  Additionally, there are a few other types of memorabilia on display.  As a matter of fact, the Cardiff City kit room could be the closest thing they have to a museum. 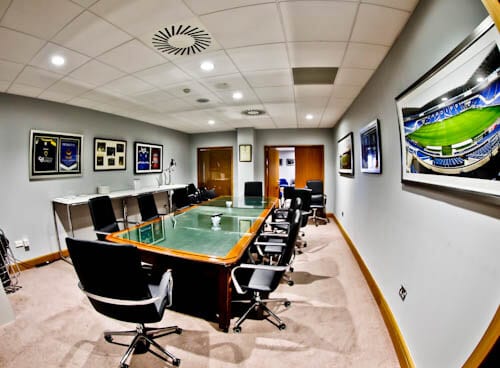 The Cardiff City boardroom features office chairs surrounding a grand desk.  For this reason, it’s a top spot to take you photo during the tour.  Be sure to view the memorabilia on display.  This reminds the boardroom members of the great stadium they play in as well as their successes and star players. 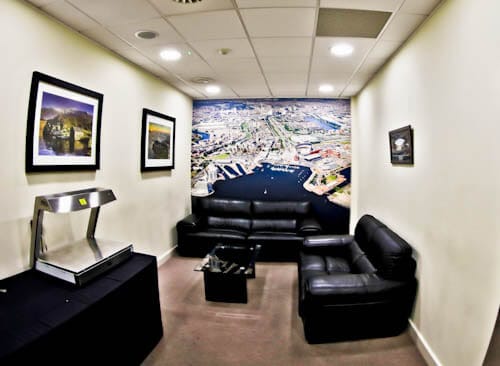 When I visited, Neil Warnock was the current Cardiff City Manager.  After the game he would invite the opposition manager into his office for a glass of wine and a chat.  A huge picture of Cardiff Bay and the city is displayed on the wall.  Finally, did you know Ole Gunnar Solskjaer was once Cardiff City FC manager? 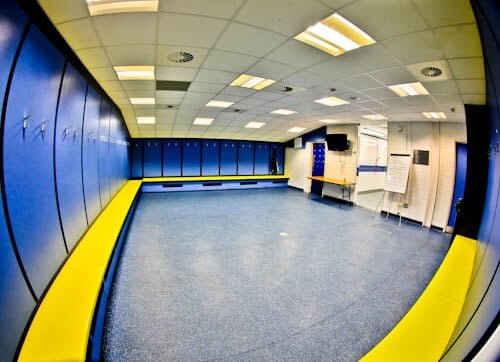 The away team dressing room is not bad!  You’re welcome to explore the dressing rooms as well as the bathroom section.  Of course, if you wish you can take photos. 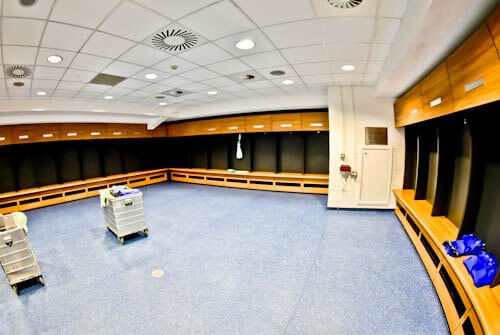 As there is no official tour schedule at Cardiff City stadium, you’ll encounter people working as you take your tour.  In fact, the kit staff were organising the home team dressing room when I visited.  If I had visited 30 minutes later I could have taken the perfect picture with the shirts on display.  Nonetheless, both Cardiff City and Wales have access to a very homely dressing room. 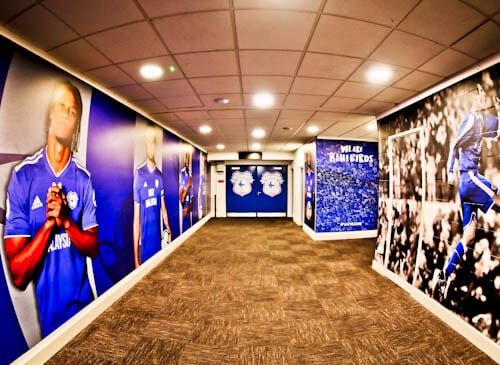 As you walk through the players tunnel you know you’re in the home of the Bluebirds, Cardiff City.  As well as the blue colors and logos, huge images of the current players are on display to the visiting team. 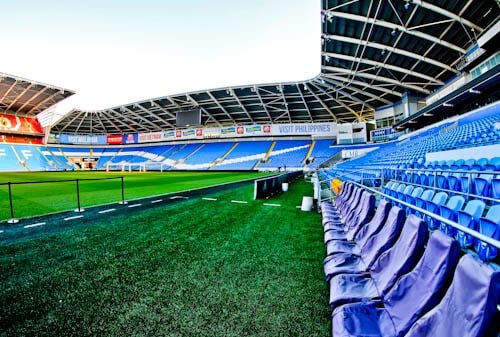 To stand pitchside is one of the best moments of the tour.  This is where Neil Warnock has been so animated for the last 2 years during match days.  Make sure you take your Instagram photos pitchside as well as sat in the dugout. 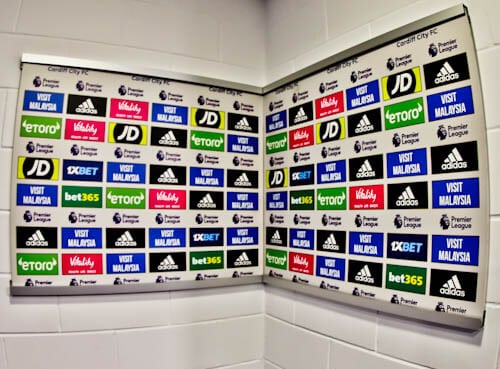 Have you seen the players and managers giving quick interviews after the match?  It’s actually a small room with a sponsor board hung up.  You’re welcome to take a short YouTube video here.  In addition, as you’ll be on a private tour you can spend as long as you want here. 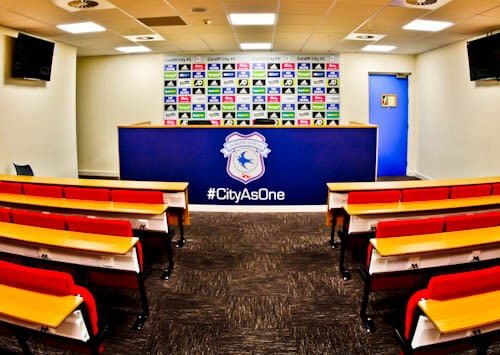 The current Cardiff City manager makes his press conferences from the Press Room.  You may sit in the managers seat and pose for your photo. 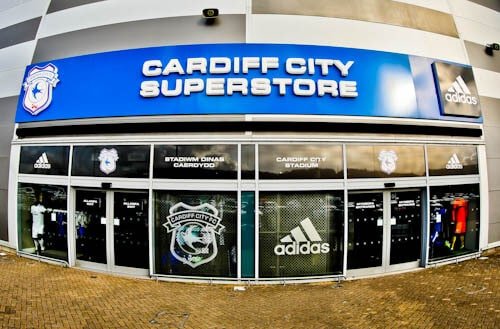 It’s worth visiting the Cardiff City Superstore as the merchandise is excellent value.  As well as selling football merchandise, you can also choose a souvenir of your visit to Cardiff.  How about buying something to wear on the tour?

How to get to Cardiff City Stadium from Cardiff Central

Firstly, it’s possible to walk to the stadium which take around 25 minutes.  Alternatively, you can take bus 95 from Wood Street in front of Cardiff Central.  Alight at Jubilee Park and you’ll see the stadium.  Enjoy your visit to Cardiff City Stadium.

Visiting Cardiff?  Why not take the Principality Stadium Tour?  Alternatively, head to North Wales and stay in the West Arms Hotel.