Cebu – Things to do in Cebu City Philippines 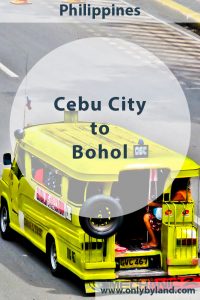 Cebu – Things to do in Cebu City

Cebu City is the second biggest city in the Philippines after Manila.  Things to do in Cebu City include;

Cebu City is huge and the traffic is terrible so you need to choose carefully where to stay.  If you stay downtown you’ll be close to the points of interest and ferry port.  Alternatively, you could stay in the Fuente Osmeña area which is within walking distance of the nightlife district. 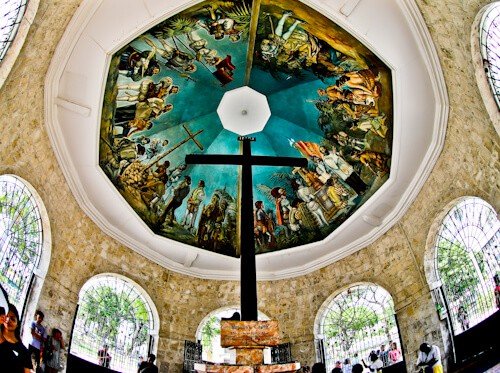 Ferdinand Magellan was a successful Portuguese explorer.  In fact he was so successful that in the 16th century he started the first expedition to circumnavigate the earth.  Unfortunately he died in the Philippines whilst taking this journey.  He and the Spanish he led on this journey brought the Magellan’s Cross to the Philippines.  As a result of the Spanish influence during this period, the Philippines is a Catholic country.  Today, the Magellan’s Cross is located in a chapel outside the Basilica Minore del Santo Nino. 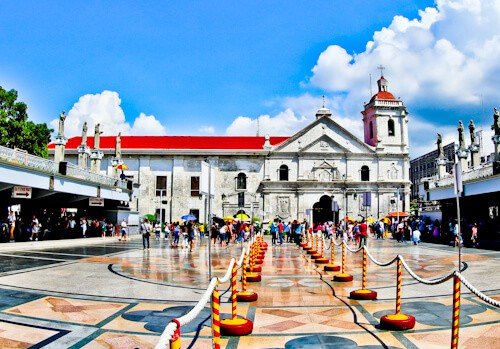 The Philippines is the only Catholic country in Asia.  Furthermore, the Basilica Minore del Santo Nino is the oldest Catholic church in the country.  In fact the church dates back to the 16th century.  It was upgraded in the 18th century, also the Pope visited in 1965.  Inside the church is a statuette of the child Jesus known locally as Santo Nino de Cebu.  Pope Paul VI declared this statuette ‘a symbol of birth and growth of Christianity in the Philippines’.  If you visit during mass you’ll see thousands of people at the church.  In addition surrounding roads will be closed.  Moreover, a short walk from the cathedral is Colon Street which is the oldest street in the Philippines. 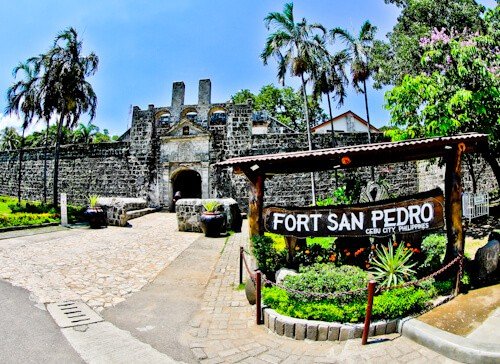 The Spanish built Fort San Pedro in the 17th century.  It was built to protect themselves from the locals at the time.  In particular the Spanish were susceptible to raids from the local Muslim community.  Throughout history the fort has served many different purposes.  Most notably it was a place of refuge for the Japanese community during World War II.  Today, the fort is a museum where you can learn all about its history.  You can also walk around the fort walls which offer panoramic views over Independence Plaza.  In addition there are a few American colonial buildings in this part of Cebu city. 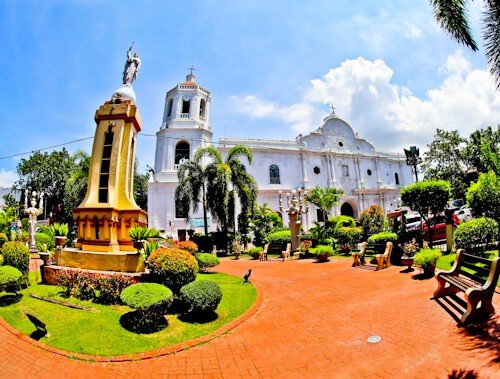 Of course the Spanish didn’t build just one cathedral when they colonized Cebu.  The second cathedral of Cebu is also one of the oldest in the Philippines.  However, this cathedral took a little longer to build than the Santo Nino.  Funds which were put forward for the building had to be used to defend themselves from the local Muslim community.  When I say defend, the locals were of course there first!  Furthermore, the Metropolitan Cathedral was severely damaged during World War II and almost completely rebuilt.  Adjacent to the cathedral is the Cathedral Museum of Cebu. 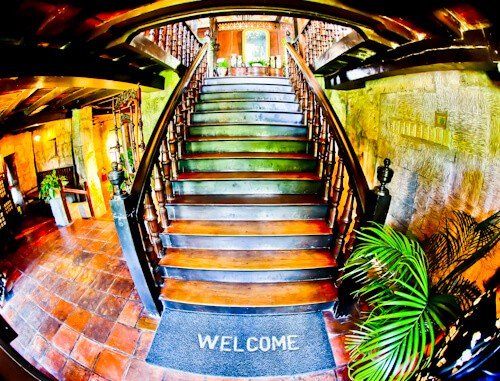 Casa Gorordo was the home of a wealthy Spanish family for several generations.  The Gorordo family built the house and lived in it from the 1850’s onwards.  It is a perfectly preserved colonial Spanish building and still has the original furniture.  You’ll even see a collection of Coca Cola memorabilia from the 1950’s.  More importantly, they have an Instagram worthy staircase.  Parts of the house are now air conditioned so it’s a good place to escape the heat.  Additionally, there are interactive maps which show how Cebu City has changed throughout the years.  Furthermore, once your guided tour is over, you’re invited to enjoy a siesta on their balcony.

I asked the guide what happened to the Gorordo family?  The answer was simple, they didn’t have a son and their only daughter married and moved out.  For this reason, the house became a museum. 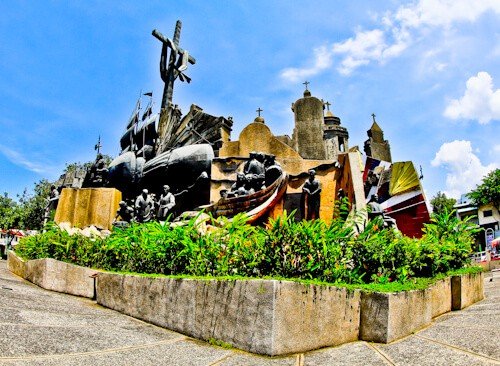 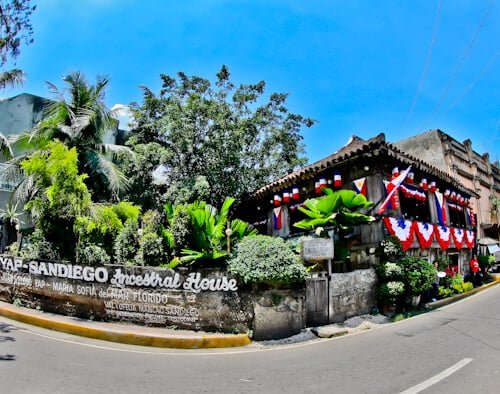 Around the city you’ll see several Chinese Temples as well as traditional houses.  The reason there are Chinese buildings is because the Chinese would trade in Cebu during Spanish colonial rule.  Notably the Yap Sandiego Ancestral House is the first Chinese house outside of mainland China.  As a matter of fact it’s claimed this house is the oldest surviving house in Cebu and dates back to the 17th century.  Today, the house is of course a museum. 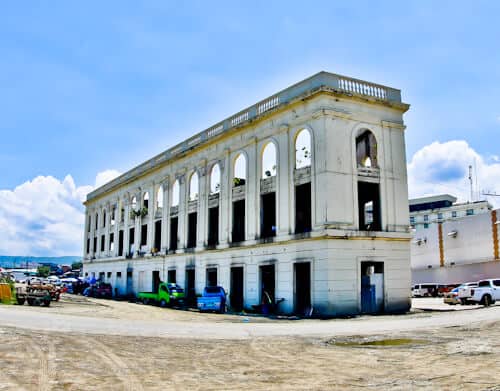 The Philippines was an American colony from 1898 until 1946 when Philippine independence became official.  The Americans bought the Philippines from Spain in 1898 after a brief war.  As a result of this colonization, there are several American colonial buildings in Cebu.  The majority of them are located around Fort San Pedro.  A perfect example of American colonial architecture is that of the former Hotel Shamrock which was built in the 1930’s.  I was half tempted to go inside as I did with the derelict Mostar Sniper Tower in Bosnia, I’m sure it would give you an adrenaline rush!  Nowadays however, you see American style buildings in the form of fast food restaurants! 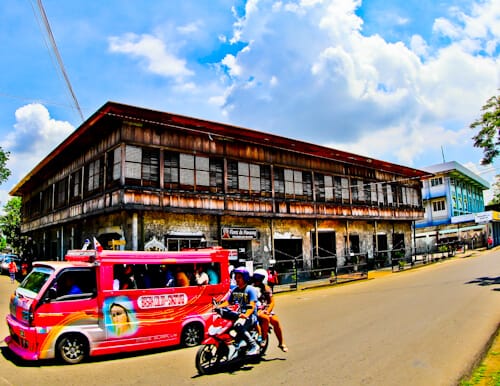 Several buildings were destroyed in the World War II bombings.  However, several of the Spanish colonial buildings were spared and still stand today.  The area around the Cebu Heritage monument is a good place to see these buildings.  In addition, the Cathedral Museum of Cebu is located in a perfectly preserved Spanish building from the 19th century. 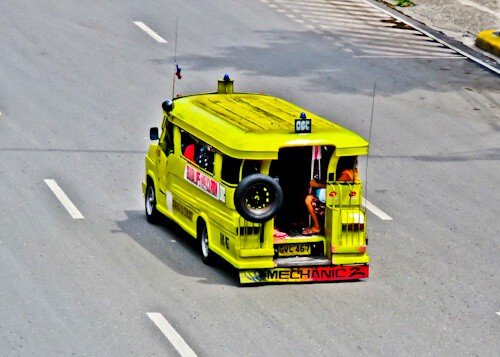 There are thousands of jeepneys on the streets of Cebu.  That is to say, they are the most popular method of public transport in the Philippines.  The original jeepneys were converted from American jeeps which were used during world war II.  Throughout the years they have been modernised and there are even e-Jeepneys on the streets today.  Most of the jeepneys are extremely colorful and make a great addition to a photo.  For this reason, it’s worth paying attention to these iconic Philippine vehicles.

Lechon is the local must try food of Cebu.  It’s pig seasoned with lemongrass, star anise as well as spring onions.  Afterwards, the pig is roasted on a skewer over hot coals.  In fact, Anthony Bourdain described Lechon as ‘the best pig ever’ therefore it comes highly recommended!  As you visit the points of interest of the city you’ll notice several Lechon restaurants, ask the locals for recommendations.

How to get from Cebu City to Bohol (Tagbilaran) 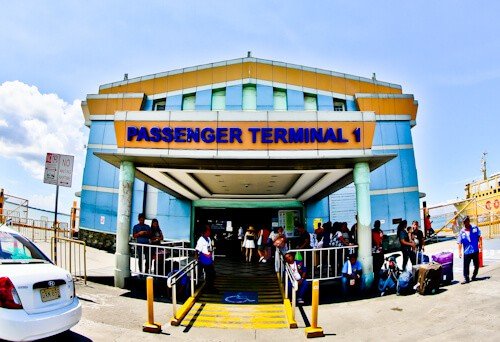 There are regular fast ferries between Cebu and Tagbilaran (Bohol).  A one way ticket costs around 500 pesos and includes a seat number in an air conditioned section.  In addition they play the latest American movies during the 2 hour journey.  You must buy the ferry ticket before you can enter the passenger terminal.