How to Choose the Best Las Vegas Hotels with KAYAK

Las Vegas is home to hundreds of hotels so it can often be difficult to select the best for your needs and budget.  In this post I’ll explore several famous hotel choices in Las Vegas but first I’ll share the best way to book a hotel.  Most importantly, I’ll share with you how to get the lowest hotel prices.

Why use KAYAK to book your Las Vegas Hotels?

A fact which some people know but others don’t is that the same hotel room for the same night can have different prices.  As a matter of fact, the person checking in before you may have paid way more or even way less than you for exactly the same stay in the same room.  The question we need to answer is, how can I be the person paying way less for the same hotel room as all the other guests?  Using KAYAK to search for your hotel room will certainly put you in the small number of guests who pay less for a hotel room.  What’s more, this method not only works for hotels in las Vegas but hotel rooms throughout the world.

Finding a Hotel Room with KAYAK

When searching for a hotel in Las Vegas simply type Las Vegas as the destination as well as the dates you wish to visit, KAYAK will do the rest.  What KAYAK does is compare the same hotel rooms on different websites within seconds.  Once you find the hotel you wish to book, click out and the booking will be confirmed within seconds.  The same goes for cars and flights.

Now, let’s explore some popular Las Vegas hotels which you can stay in at a lower rate thanks to KAYAK.  Maybe with these good deals, you can take a nice room upgrade to enhance your stay in Vegas!

The Venetian – My Recommendation 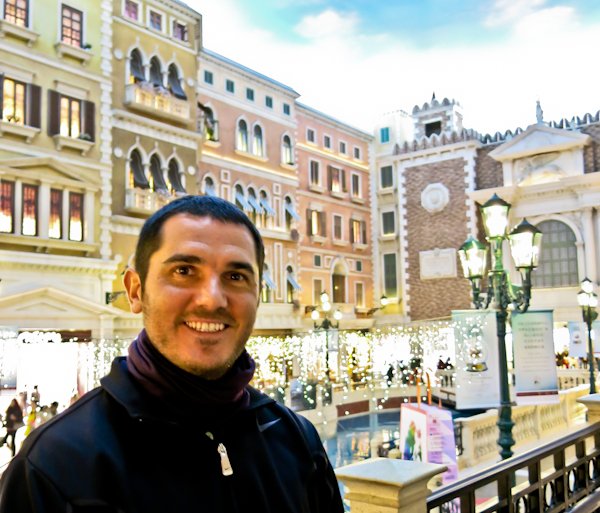 My favorite casino hotel in Las Vegas is the Venetian.  As the name suggests, the theme of this hotel is Venice, Italy.  Do you want to visit Venice without having to travel across the Atlantic?  Do you wish to take a ride through the Grand Canal in a traditional gondola?  How about shopping in Renaissance style buildings?  All of this is possible in the Venetian which is in fact the second largest hotel in the world! 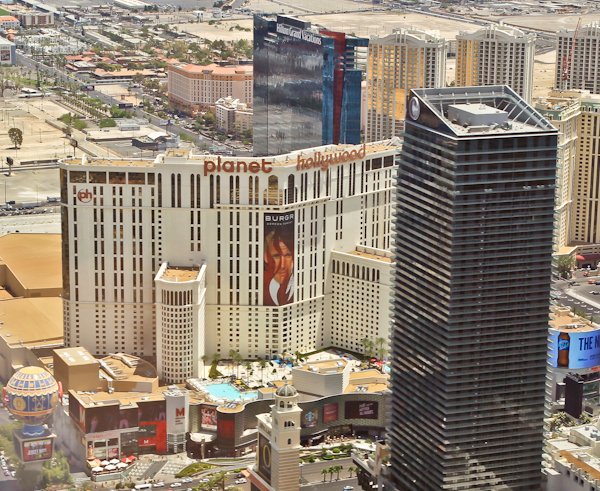 Planet Hollywood invites guests with the intention of making each and everyone of them feel like a Hollywood star.  One things for sure, guests who love shopping could spend hours on the Miracle Mile of stores!  Afterwards, relax in your Hollywood themed room. 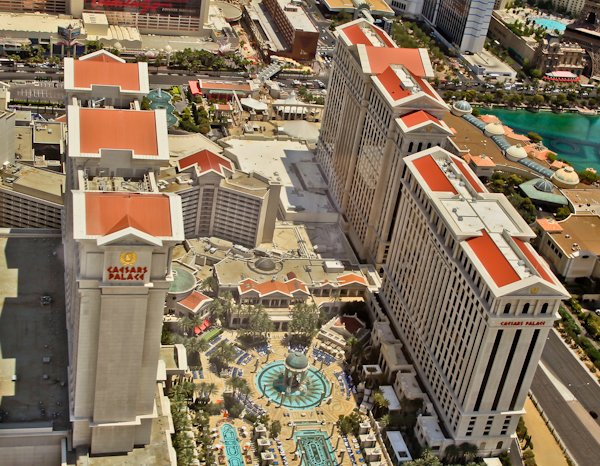 Caesars Palace is perhaps one of the most famous casino hotels on the Strip.  No doubt you’ve seen it in a movie at some point which often shows off the huge suites, pools and spa facilities.  Famous movies which feature Caesars Palace include, The Hangover and Rain Man.  However, what impresses me about Caesars Palace are the Italian monuments which you can see in Las Vegas.  Don’t be shocked when you see the Trevi Fountain as well as a huge David statue.  Lastly, if you’re visiting with a large budget you can book a Roman Villa. 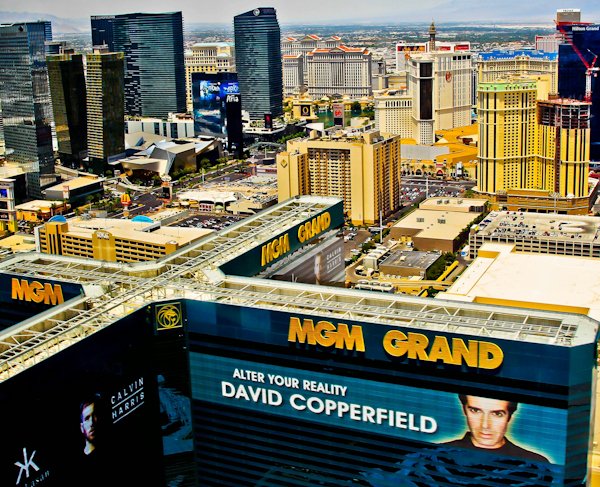 Firstly, the MGM Grand is the largest single hotel in the US.  For this reason, I stayed at the MGM to gain bragging rights.  Another thing the MGM Grand is famous for is boxing matches.  Indeed this is where Mike Tyson infamously bit Evander Holyfield’s ear.  More recently, it was the home to Floyd Mayweather. 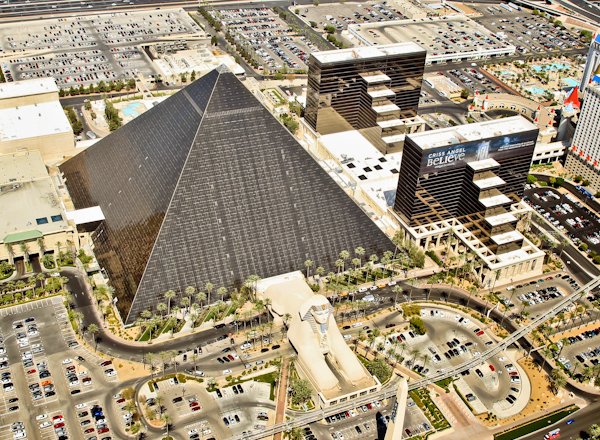 Have you ever been to Egypt?  The main draw of Egypt is to see the pyramids and the Sphinx.  Did you know that Las Vegas has its very own Sphinx and pyramid.  As a matter of fact, the light which shines from the top of Luxor can be seen from space.  An interesting fact about the pyramid is that it’s the 6th tallest pyramid in the world.  If you’re interested in pyramids and Egyptian monuments then the Luxor is for you.  What’s more, it’s also one of the cheaper casino hotels to stay in Las Vegas. 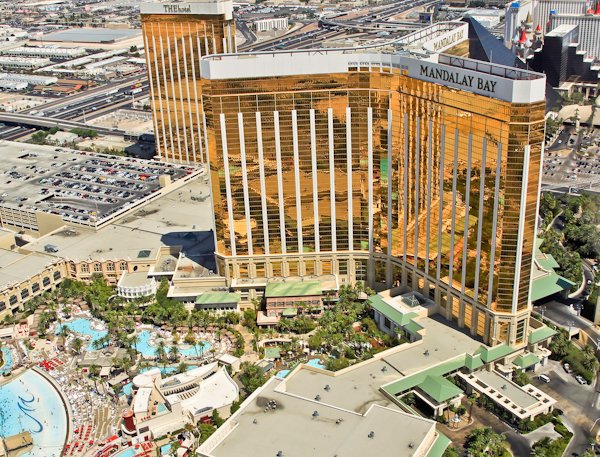 Mandalay Bay is one of the more upmarket hotels on the Strip.  It’s located towards the end of the Strip therefore you can get a wonderful Strip from a room towards the top of this 43 story hotel.  Lastly, at the time of writing, Mandalay Bay is the home to Michael Jackson ONE, which is known as the best Michael Jackson commemoration show worldwide. 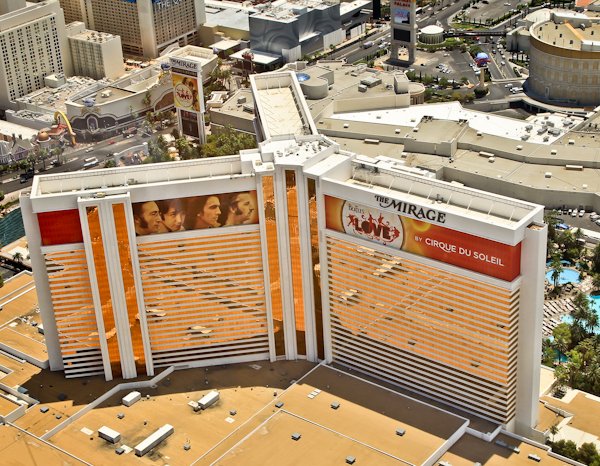 The Mirage Las Vegas is most famous for the volcano which regularly erupts in front of it.  Both adults and children alike are in awe of it.  Another top draw in the Mirage are the regular Beatles shows.  Have you ever stayed in a Polynesian style room?  If you wish to tick this off your list then book the Mirage! 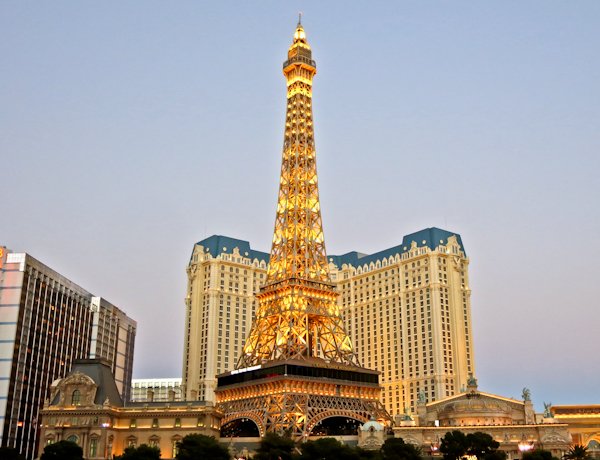 Las Vegas has its very own Eiffel Tower which sits in front of Paris Las Vegas Resort and Casino.  It’s half the size of the original but an imposing tower nonetheless.  What’s more, you can even take a lift to the top of the tower for panoramic views over the Las Vegas Strip.  Lastly, the rooms feature a classic European look with a modern twist of course. 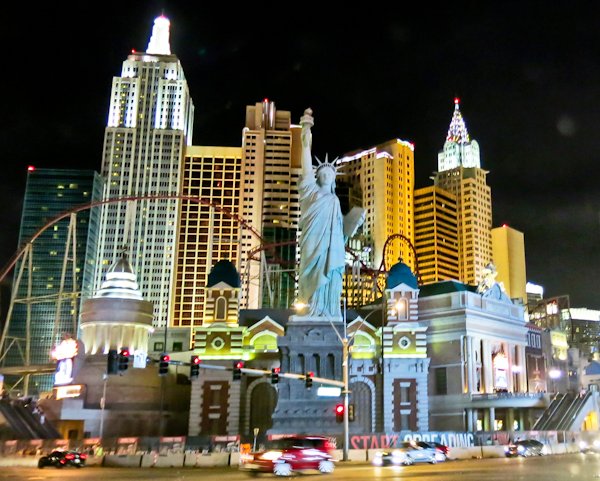 How many Las Vegas landmarks will you see on the Strip?  One way to find out is to hire a car and drive down the Strip yourself.  New York New York has its very own Statue of Liberty posing in front of it.  In case you miss it, there’s also a replica of the Empire State Building.  Stay at New York New York in one of the spacious New York themed rooms. 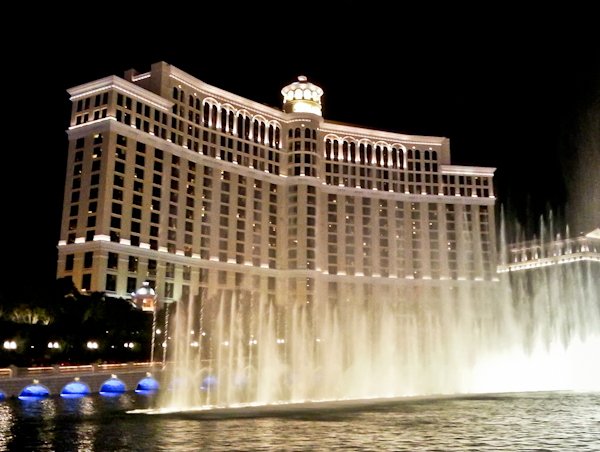 The Bellagio is the 14th largest hotel in the world.  It’s also one of the more upmarket hotels on the Las Vegas Strip.  You may recognise it from the end of the Oceans Eleven movie.  Additionally, the hotel is famous for its fountains which regularly dance to the rhythm of the music which is playing.  Are you a chocolate lover?  Inside the Bellagio is the worlds largest chocolate fountain.  Choose Bellagio if you wish to stay in one of the most iconic venues in Las Vegas. 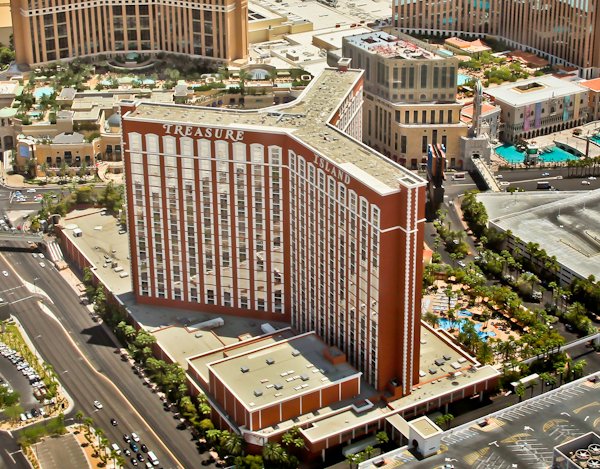 Treasure Island is one of the more relaxed and budget options in Las Vegas.  However, it’s still a lovely hotel in a good location and you may be tempted to upgrade to a better room here. 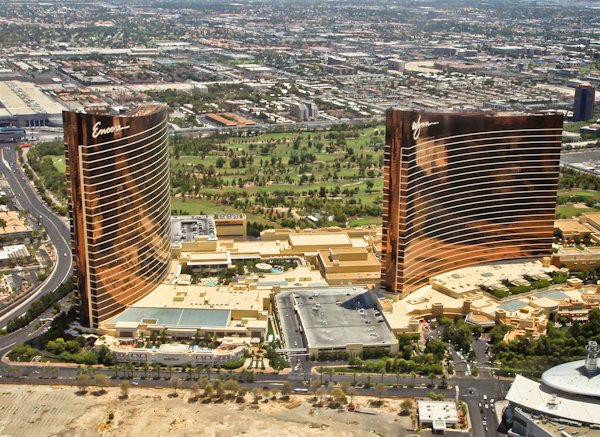 If you’re looking for the ultimate upmarket hotel experience in Las Vegas then you should consider the Wynn Las Vegas.  Wynn Las Vegas is the flagship Wynn property.  To cement this fact, this resort has won more Forbes Five-Star Awards than any other independent hotel company in the world.  Stay here for everything upmarket from spas to restaurants and shopping. 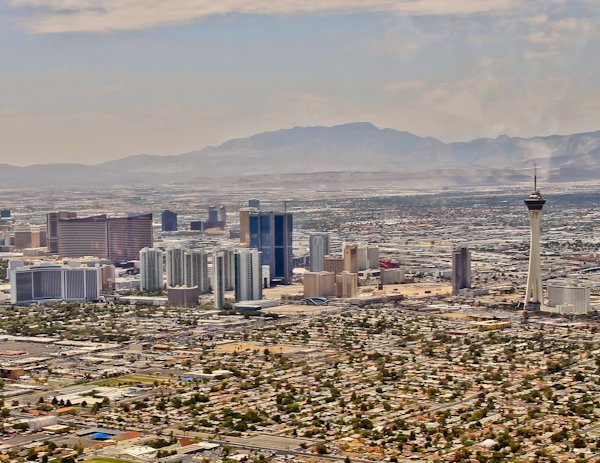 The Stratosphere is located at the end of the Strip.  In addition, it’s the tallest building in Las Vegas at 350 meters.  Of course, you can take the elevator to the top where not only will you see panoramic views over the Strip but there’s also a theme park at the top!  The Strat Hotel is located at the bottom and often has the some of the lowest room prices in Las Vegas.  It’s a little for from the majority of Strip hotels and casinos though. 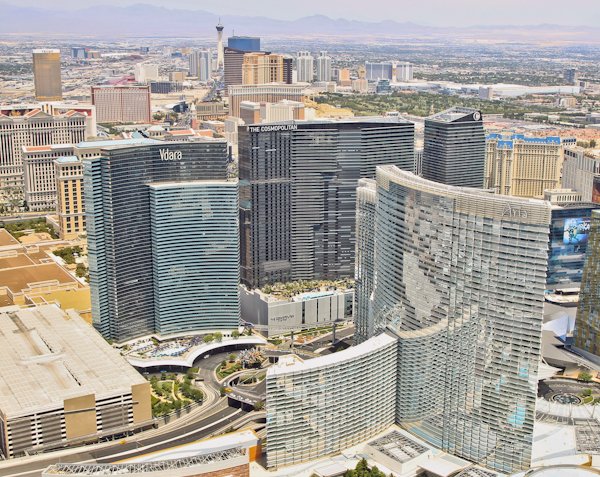 The Aria Resort recently appeared in the movie, Last Vegas which showcased how luxurious it is.  This location is known as City Center and features several hotels as well as residential, retail and entertainment complexes.  As a result it’s possible to stay here without the need to visit anywhere else on the Strip. 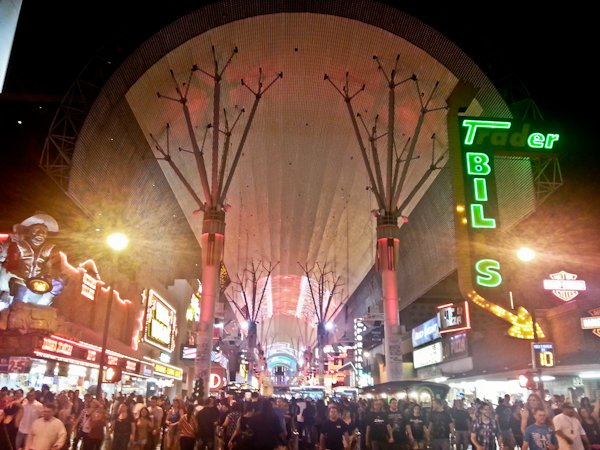 Fremont Street is an entertainment district away from the Strip in downtown Las Vegas.  Here you’ll find several cheaper hotels as well as bars and casinos which boast looser slots.  Consider staying in this area if you’re visiting Las Vegas on a budget.

Choosing a hotel should be a fun task.  With KAYAK it’s not only fun finding a hotel but it’s rewarding when you find that low price in the hotel you really want to stay in.  Once the hotel is booked, it’s time to start planning that Vegas Vacation!