What to See in Comillas Spain + Gaudi Monuments

Comillas is a small town in Cantabria, Spain which has a lot to offer.  Here are a few things to do and see in Comillas Spain;

I highly recommend you stay overnight in Comillas as hotels are excellent value. 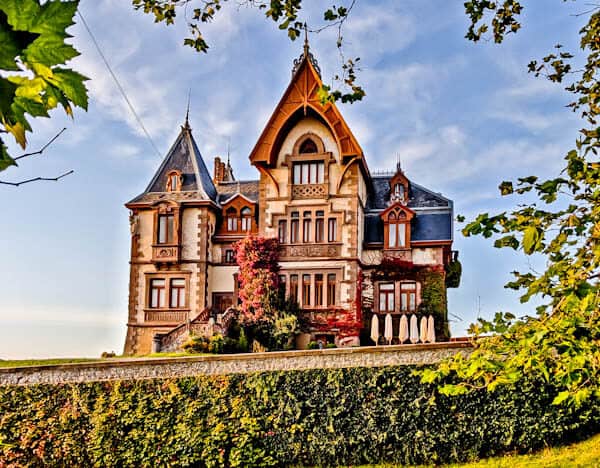 El Duque is an English style mansion which sits on top of a hill in Comillas.  Not only does it stand out because of its design but also because it’s visible from all over Comillas.  It was built at the end of the 19th century when English style houses were in fashion amongst the rich. 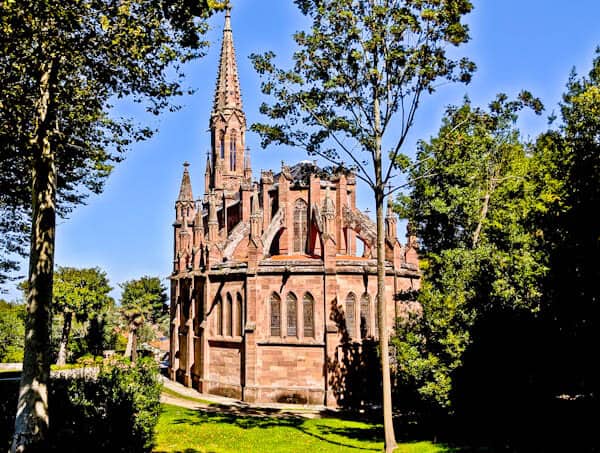 Comillas Pantheon is a mausoleum of the first two sons from the Marquess of Comillas.  It was the first modernist building in the city.  Although the building was not designed by Gaudi, he did in fact design the royal seats as well as the benches inside. 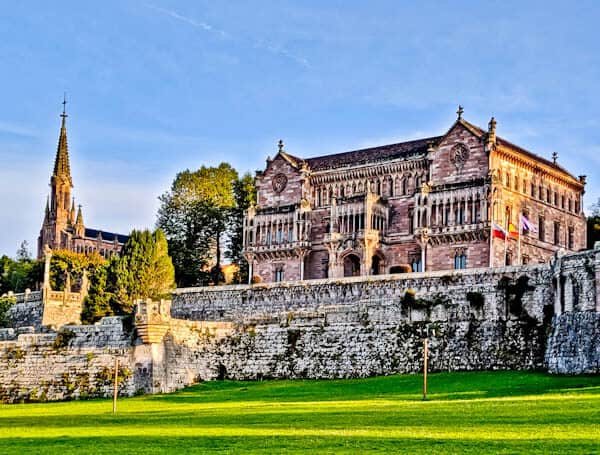 Adjacent to the Pantheon is the Sobrellano Palace.  It was built for the first Marquess of Comillas.  In addition, it was also used by King Alfonso XII.  As a matter of fact, it’s believed the king laid the first stone in 1888. 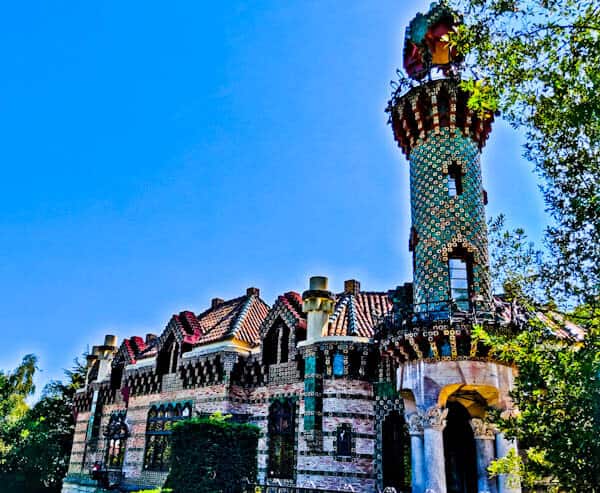 The most famous building in Comillas is the Capricho de Gaudi.  Of course, Gaudi is famous for his Barcelona landmarks such as the Sagrada Familia and Park Guell.  However, why not visit the more peaceful Comillas Cantabria to see a classic example of his work! 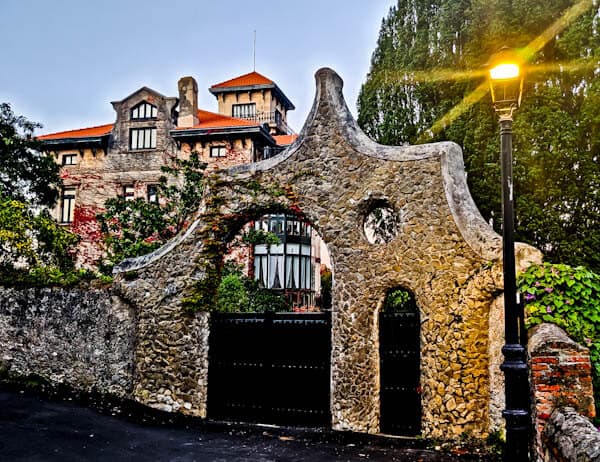 Another example of Gaudi architecture in Comillas Spain is the Gate for Birds.  Also known as the Portada Casa Moro in Spanish, it has 3 doors.  The main doorway is for cars with the peoples entrance adjacent to it.  Finally, the top right entrance is for birds. 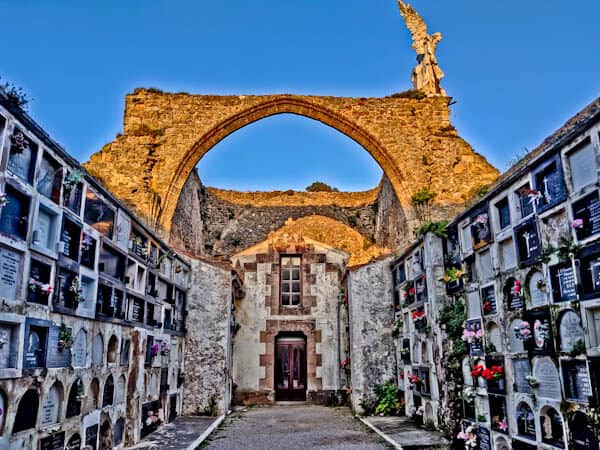 On top of a hill in Comillas is a walled Gothic cemetery.  In my opinion, it’s one of the most impressive cemeteries in the world, along with the one in Zagreb, Croatia.  The marble statue on top gives it an extra spooky feel.  Lastly, the cemetery makes an excellent sunset location, but it may get a little spooky in the dark! 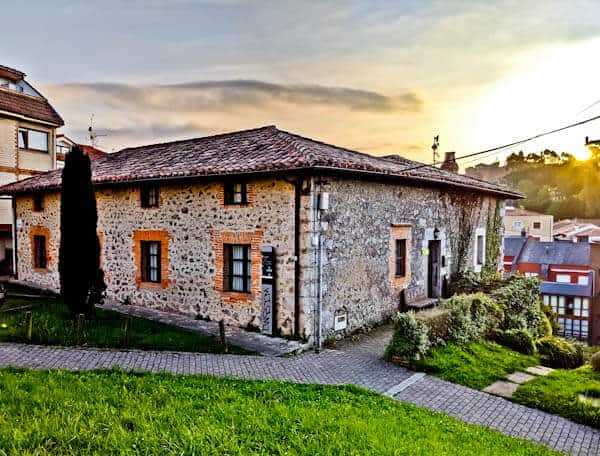 The prison was built at the end of the 19th century and served its purpose for many years.  Today however, it’s a hotel for pilgrims on the Way of St James, Northern Route. 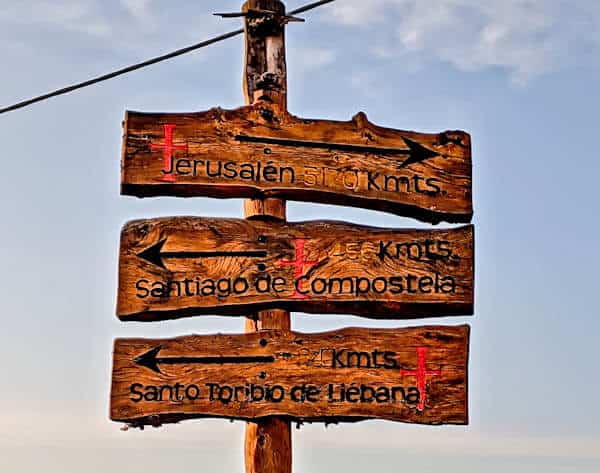 In front of the prison are signs showing the distance not only to Santiago de Compostela but also to Jerusalem.  This sign has extra significance to pilgrims walking the Camino del Norte. 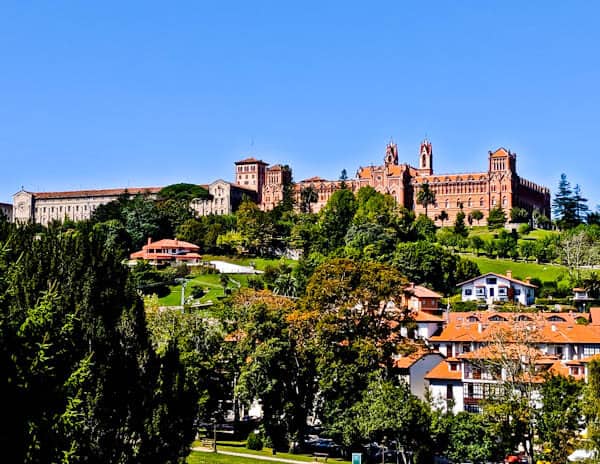 The historic university of Comillas was built by the son of the first Marquess.  It’s built on top of Cardosa Hill and is visible from all over the city. 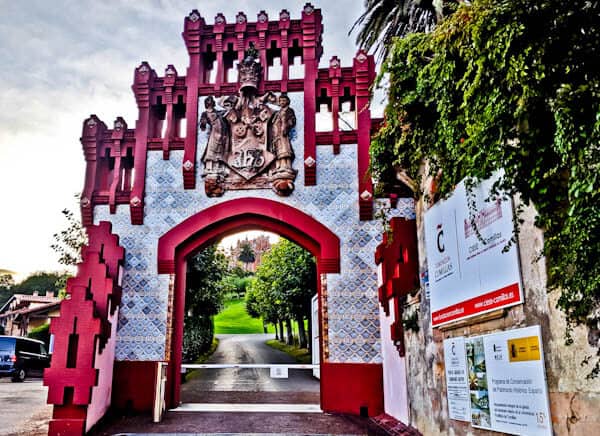 To access Comillas University you must pass through the historic gate.  The plaque on the gate indicates ‘Christ, Saviour of Men’. 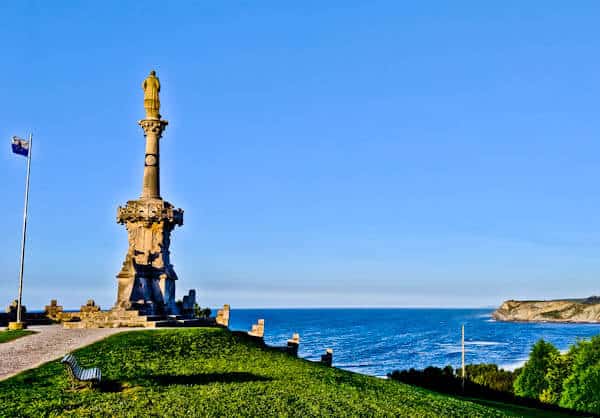 I’ve mentioned the Marquess of Comillas several times.  His name was Antonio Lopez.  Of course, there is a monument to him overlooking the city.  Furthermore, this monument offers panoramic views over the city as well as the Bay of Biscay.  As a result it’s a popular sunset location. 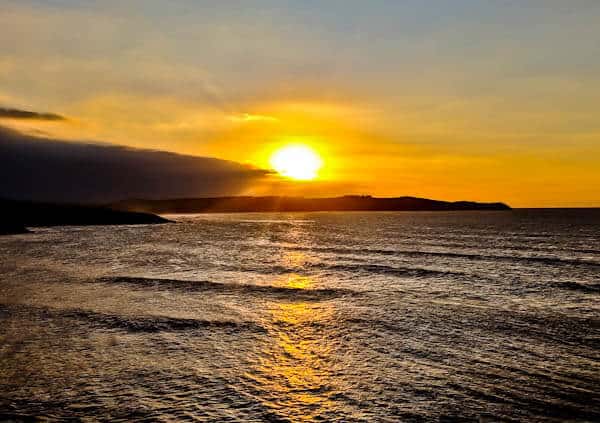 Another both wonderful and secluded sunset location is Punta de la Moira.  From here you have majestic views of the sun setting over the water. 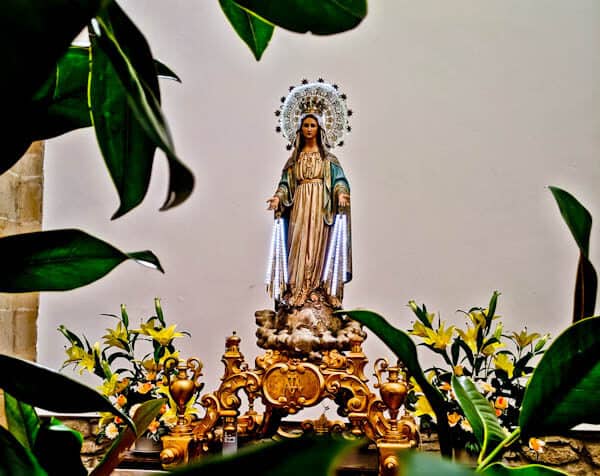 San Cristobal Church is the major landmark of Comillas.  It’s located in the center of the city and visitors are welcome to enter.  Once inside, you can admire the displays of religious figures.  One such character is almost a Wolverine version of Mary! 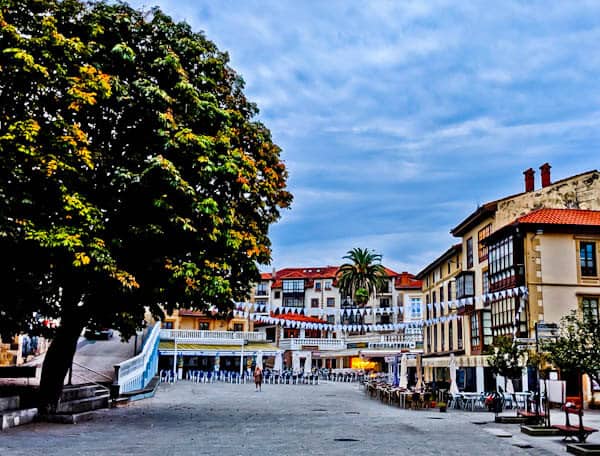 Adjacent to the San Cristobal church is the main square of Comillas.  This is known as Corro Campios and is full of restaurants.  Additionally, a market is often held here. 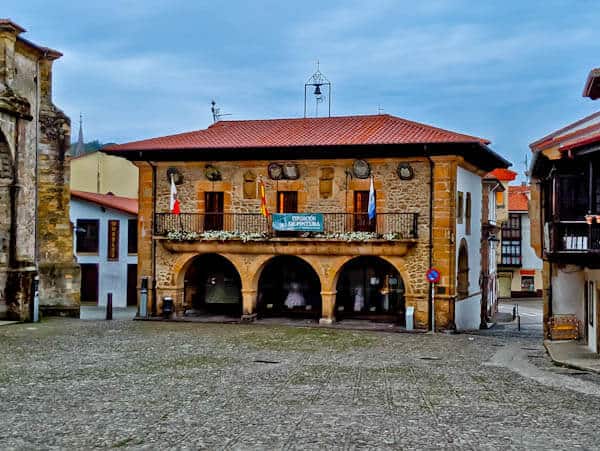 The former town hall is one of the stand out buildings of Comillas.  It was built at the end of the 18th century in Romanesque style.  Those walking the Camino del Norte route to Santiago de Compostela will walk right past it. 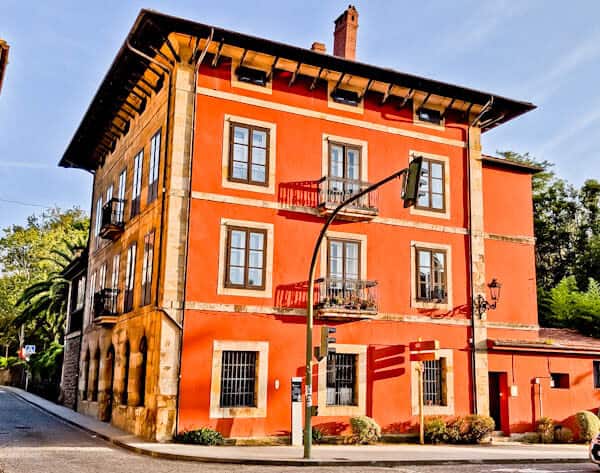 You could easily walk past Casa Ocejo on the assumption it’s just another beautiful example of Spanish architecture.  However, a significant event in Spanish history happened here.  On 5th September 1881, King Alfonso XII held an important meeting here.  For this reason, Comillas was considered the Spanish capital for one day.  Lastly, Antonio Gaudi was involved in some of the garden design. 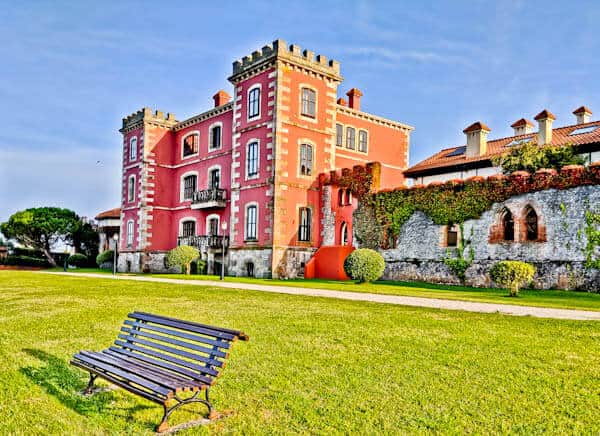 La Cateruca is a former mansion on a hill in Comillas.  King Alfonso XII famously visited here in 1882 where he held a gala dinner in the gardens.  Today however, La Cateruca has become a stunning set of apartment buildings.  As a result, it’s a private residence.  If you wish to visit the residence you must find an open door and act responsibly once inside.  Photographers will be rewarded at dusk when the low light glows on the facade. 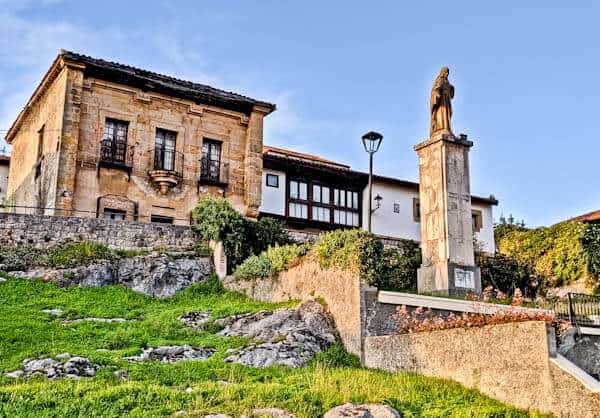 The Sacred Heart Statue is Comillas answer to Christ the Redeemer in Rio, Brazil.  Unfortunately, it was destroyed during the Spanish civil war and what you see today is a reconstruction.  Nonetheless it’s an imposing statue which overlooks the city. 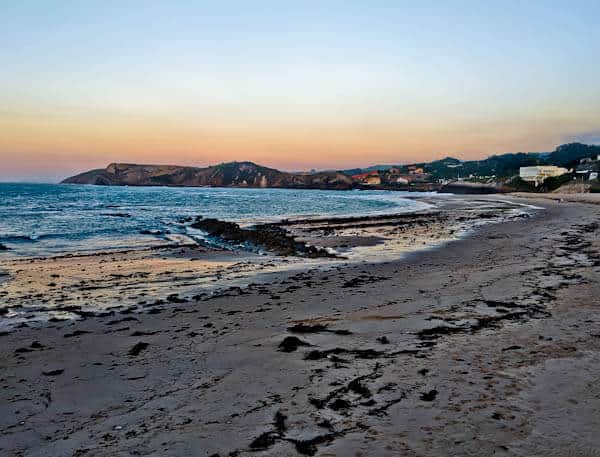 Comillas has its very own beach.  In the summer months there’s no better place to cool down.  What’s more, I was there in September and conditions were still ideal to swim.  In addition, there are several cafes and restaurants alongside the beach.

Where to eat in Comillas? 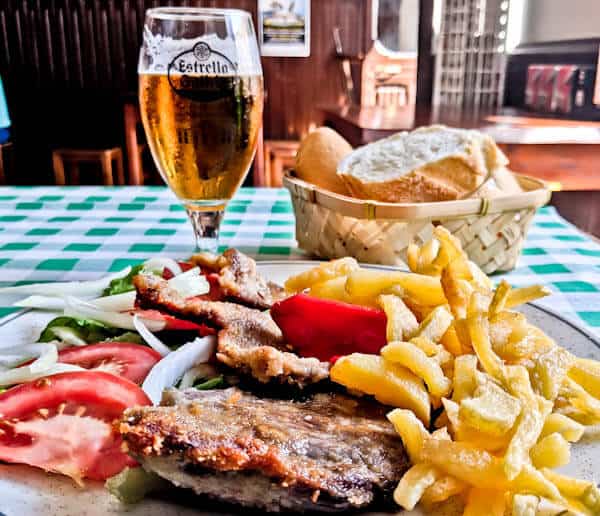 There are several good restaurants throughout Comillas so enjoy.  However, there is one family restaurant which I highly recommend.  Unfortunately, it’s not open in the evenings but you can enjoy a good meal there in the afternoon.  Fuente Real restaurant is adjacent to El Capricho de Gaudi, here is the exact location.  Buen provecho.

Enjoy your Visit to Comillas, Spain 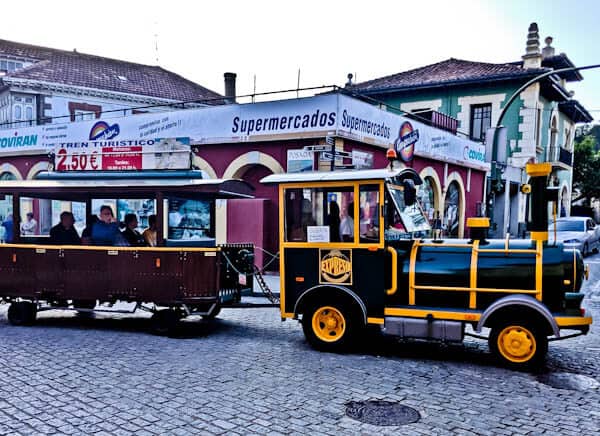 Enjoy your visit to Comillas, Spain.  Not only can you explore Gaudi architecture without thousands of other tourists but you can also enjoy good Spanish cuisine as well as a good beach!