CSKA Sofia are one of the most successful Bulgarian football teams.  The CSKA Sofia stadium is known as the Bulgarian Army stadium.  Reasons to visit the stadium include;

You can walk to the stadium from any centrally located, Sofia hotel.  As you would imagine in a capital city, hotels are a little more expensive than the rest of the country, for this reason you should check airbnb. 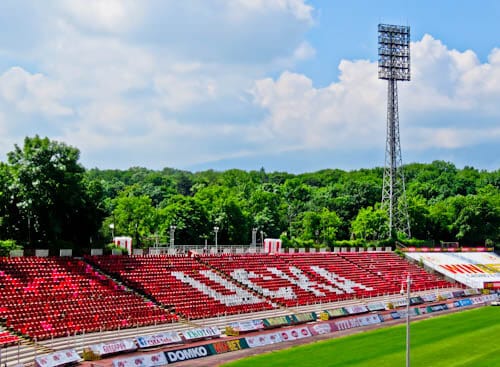 The CSKA, Bulgarian Army stadium is located in center of Sofia.  As a matter of fact it’s in the most famous park of Sofia, Borisova Park.  As well as being a huge park full of features, there’s a wooded area with walking trails.  You could call it the Central Park of Sofia!  The nearest metro station is the Vasil Levski Stadium station on the red line.  Don’t be confused by the larger Vasil Levski stadium which is adjacent to this one. 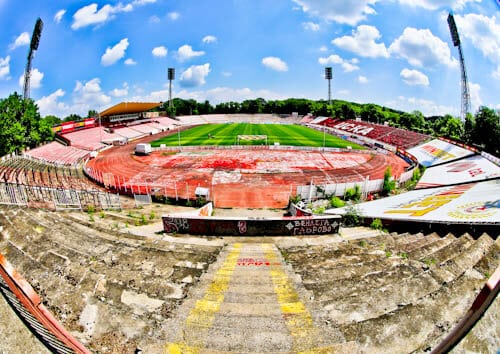 The Bulgarian Army stadium opened in 1967 after 2 years of construction.  The capacity is around 23,000 spectators.  That includes safe standing areas at each end of the pitch.  Only a small part of the stadium is covered therefore you’ll get wet if it’s raining during the match.  Additionally, there’s a running track around the pitch as with most stadiums in the Balkans. 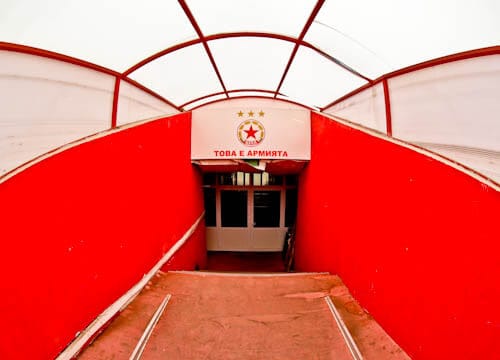 Players who have walked through this tunnel include, Dimitar Berbatov, Martin Petrov, Hristo Stoichkov and Stiliyan Petrov.  All four of these legends went on to make a career in western Europe.  Of course, Stoichkov is one of the most famous Bulgarian footballers of all time, who went on to play for Barcelona.  Berbatov played at both Manchester United and Tottenham Hotspur.  You’re welcome to take a walk down the same players tunnel these legends did. 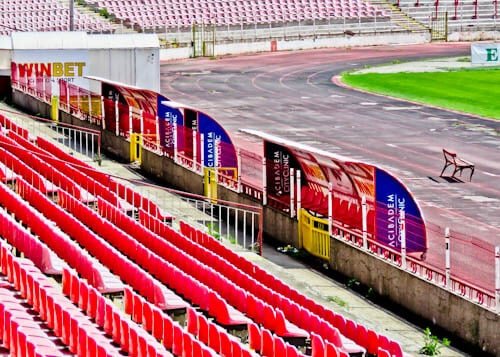 When there is no game on, tourists have permission to walk around the stadium.  Locals who have seen the stadium a thousand times, utilize the running track to keep fit.  You can sit in the dugout and take pictures as well as take pictures pitch side.  Of course, it’s forbidden to stand on the grass. 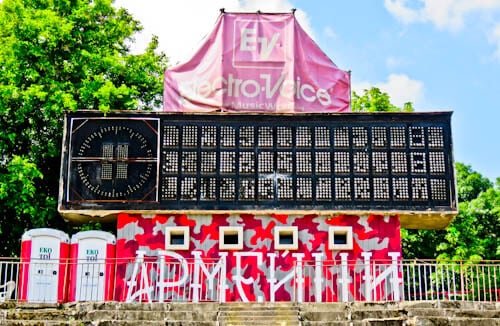 CSKA Sofia use a historic scoreboard that looks like it has been in use since the stadium opened in 1967.  It’s similar to the scoreboard in the biggest stadium in Bulgaria which is now abandoned.  Additionally, take a look at the portable toilets beside the scoreboard.  If you come to watch a match, I don’t recommend drinking a lot or you’ll have to make several visits to one of these!  Unless of course, you choose the VIP section. 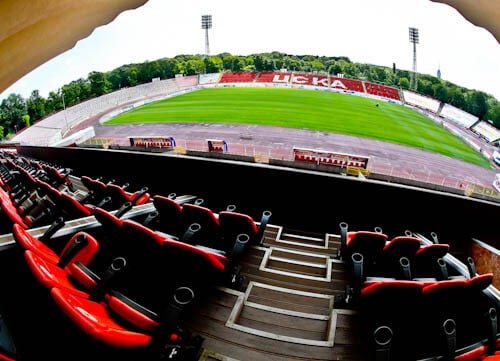 The VIP section is a covered section which features comfy seats, as well as access to restaurants and clean toilets.  Most importantly, you have the best view of the game.  In addition, you’re away from any hooligans which may be in the standing section of stadium! 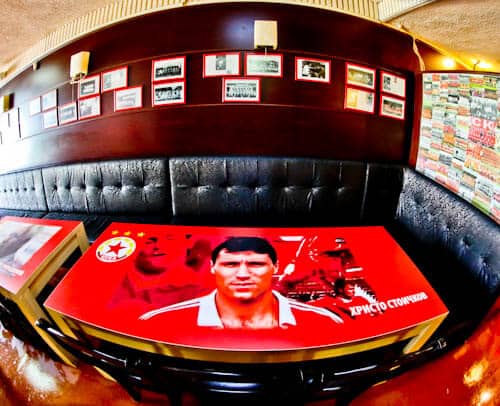 The museum is officially known as the CSKA Sofia Glory Museum.  In actual fact, it’s a themed cafe full of memorabilia and trophies.  CSKA Sofia have won several trophies including the Bulgarian League which they won consecutively 9 times.  In addition, they’ve won the Bulgarian Cup and Super Cup several times.  As a matter of fact, there are many of these trophies on display in the CSKA Sofia Glory Museum.  Which is your favorite Bulgarian player?  It’s likely he has roots at CSKA Sofia.  Furthermore, it’s likely there is a section of the museum devoted to him.  I chose the Hristo Stoichkov table to enjoy my coffee at. 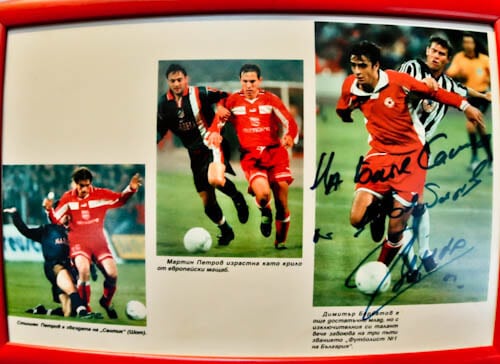 As well as several trophies on display, there is signed memorabilia by famous players.  As I mentioned, Dimitar Berbatov, Martin Petrov, Hristo Stoichkov and Stiliyan Petrov all had spells at CSKA Sofia early in their careers.  It’s worth investigating the memorabilia on display as there are some impressive signed images from early on in their careers.  Who knows, maybe the next Stoichkov is playing for CSKA Sofia right now!  It’s worth mentioning that the museum staff are extremely friendly and will be keen for you to learn the history of their club.  Where are you from?  Maybe they know a former CSKA Sofia player who has played in your country. 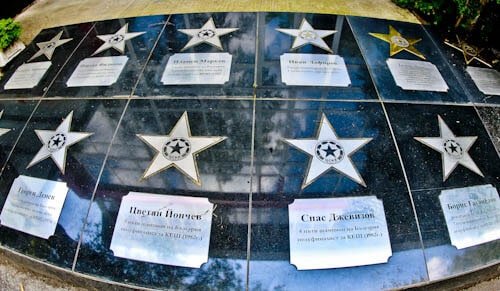 In front of the stadium is the CSKA Sofia walk of fame.  There are stars from their greatest players, this is definitely a good selfie location!  Additionally, there’s a wall which explains exactly how many trophies the teams has won and when.  Their European success is also detailed which included 2 European Cup semi finals.  This is a football team with a rich history! 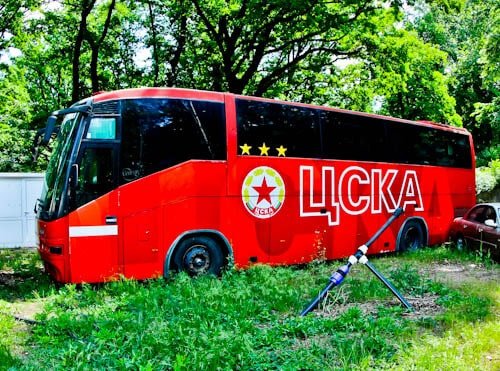 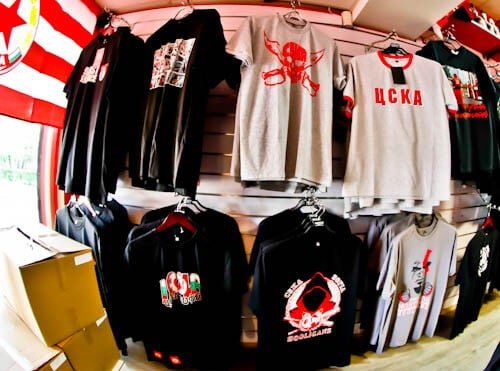 I would recommend you visit the museum first, the staff will be happy to see you and may even show you more of the stadium than I saw!  In addition, check the Bulgarian league schedule, there may be a game on when you’re in town.

Check out the Red Star Belgrade stadium in Belgrade, Serbia.