What to See in Dakar Senegal + UNESCO Sites

Visiting Dakar Senegal?  Here are a few things to do in Dakar and the surrounding area:

You can find some excellent hotel deals in Dakar.  I personally stayed at the friendly Hotel San Louis Sun in the center of Dakar which meant I could walk to most of the Dakar attractions.  Additionally, their hotel features an excellent restaurant serving local Senegalese cuisine. 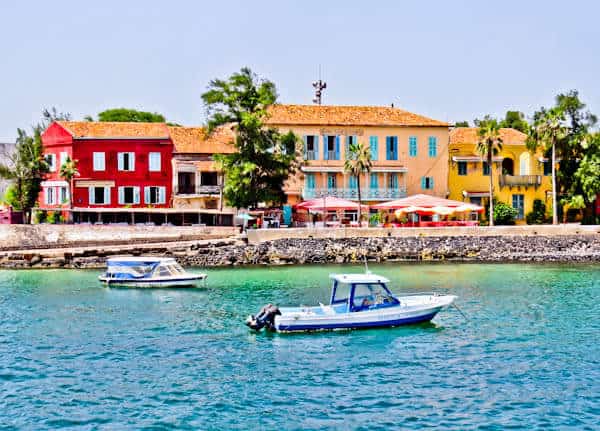 No trip to Dakar is complete without a trip to the UNESCO protected Goree Island.  The main reason to visit is for the former house of slaves and also the fort museum.  However, there’s more to Goree Island than this dark history.  Take a walk around the island and admire the colorful French colonial buildings.  In addition to these are several restaurants, souvenir stores and even a couple of beaches.  Frequent ferries leave from Goree ferry terminal in central Dakar. 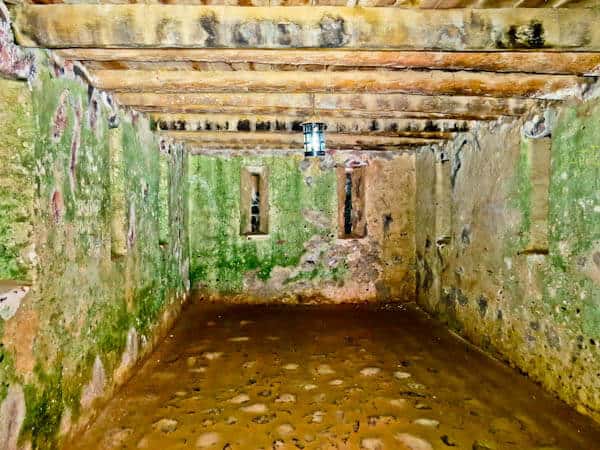 Of course, Senegal is a former French colony.  But that does not mean only the French shipped slaves from here.  Before the French this slave island was used by the Portuguese, Dutch and British.  When you step inside the slave house, Goree Island has a whole different feel in comparison to the colorful houses outside.  As a matter of fact, it’s believed this was the largest slave trading hub in Africa.  If you’ve not read about the slave trade, here you’ll learn how brutal and cruel Europeans were throughout this period.  Finally, the house of slaves has become a pilgrimage destination for many and famous visitors include Nelson Mandela, Barack Obama as well as Michael Jackson. 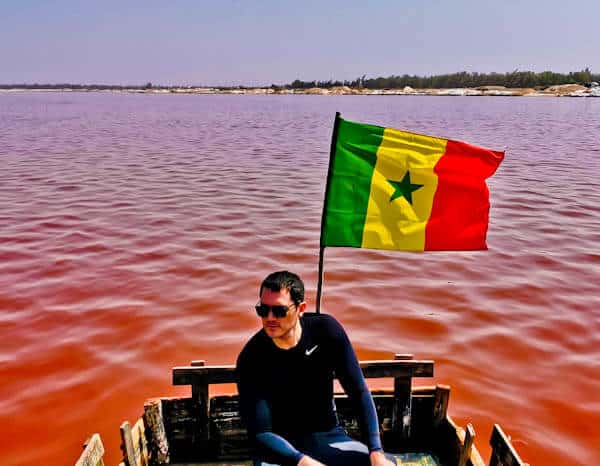 Should you visit Lake Rose?  More importantly, how much does it cost to visit Lake Rose and what is there to do there?  Lake Rose is an hours drive from central Dakar therefore you’ll need at least half a day to visit.  You can easily find a taxi to take you, wait and bring you back for around 30000 francs.  If you require a boat ride, the price is around 10000 francs which takes you to the salt collectors and back.  Finally, the 2 main reasons to visit are to get a photo in the boat with the iconic Senegal flag.  The second reason to visit is to photograph the salt collectors.

When is the best time to visit Lake Rose?  Firstly, you must be lucky to witness the pink waters you see in pictures.  However, to maximize your chances you must visit at midday during dry season.  I was there at the end of January around 1 pm and as you can see from my pictures, it’s more brown than pink.  Nonetheless, it’s definitely and Instagram worthy destination. 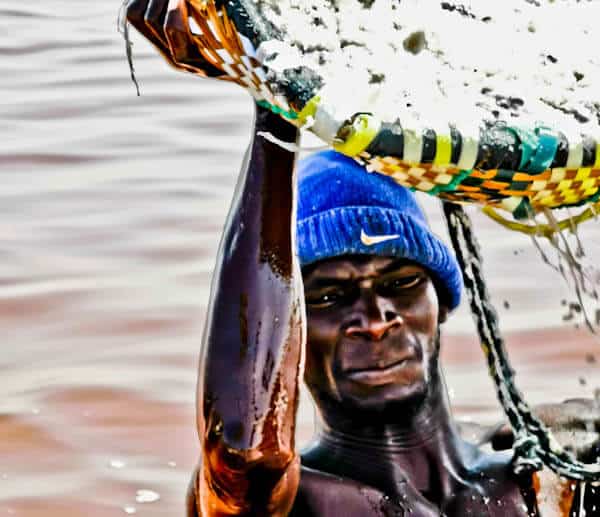 You must take a boat out to the middle of the lake to see the salt collectors.  These guys extract several tons of salt from the lake each day.  Salt which self replenishes throughout the year.  Of course, they’ll ask you for a tip if you take their photo.  A few coins is enough but maybe you should give them a little more considering the conditions they work in. 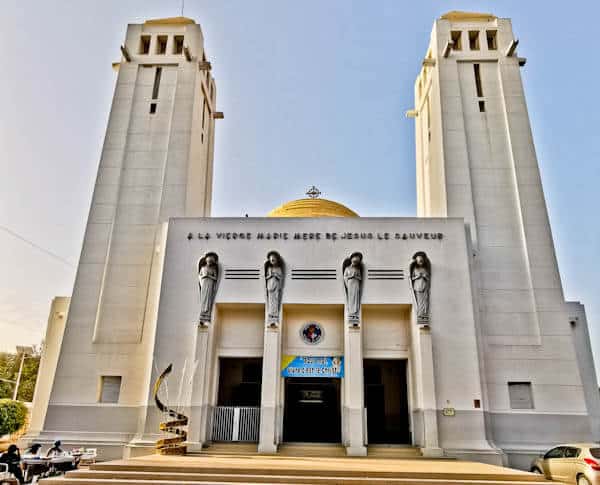 Dakar Cathedral is officially known as Our Lady of Victories Cathedral.  Even is you’re not religious it’s worth visiting the cathedral.  It’s free to go inside and admire the interior.  Or maybe you could go inside, sit down and take a rest from the heat outside. 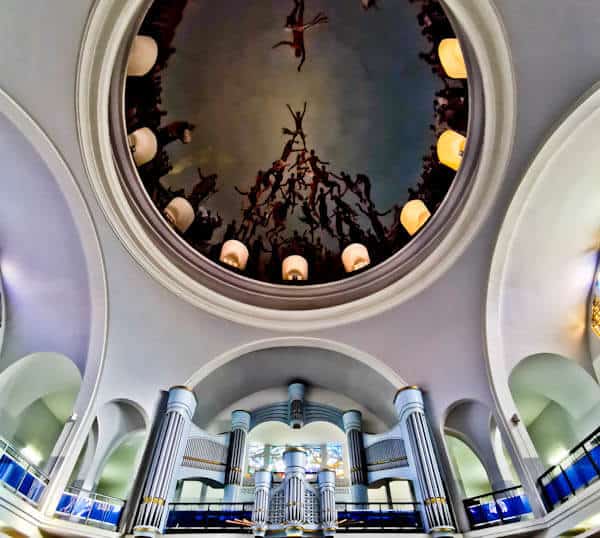 There are several stunning features to the cathedral.  Perhaps the most impressive are the huge organ and painted dome. 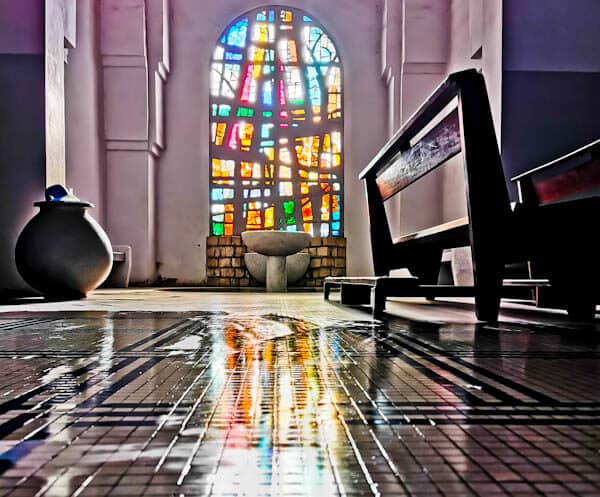 When you visit Dakar Senegal the last thing you expect to see are colorful stained glass windows illuminated by the morning sun. 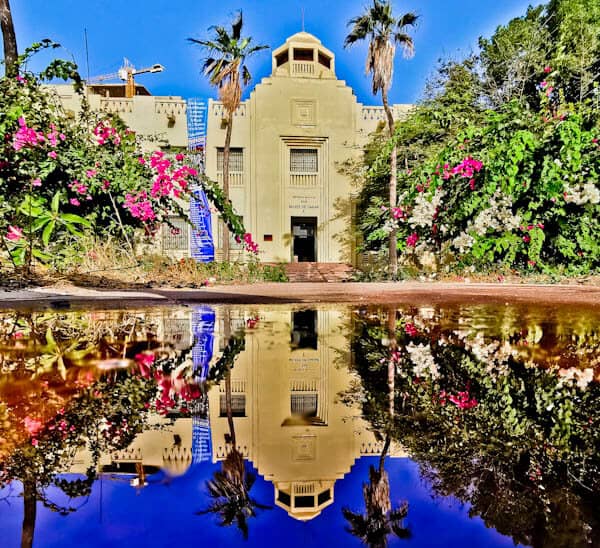 IFAN African Arts Museum features several masks from all over West Africa.  If you are interested in masks and photographing masks you must visit.  However, at 5000 francs some tourists may skip this museum due to the high price.  Considering that much African art has been stolen from Africa and taken to Europe, it’s a small price to pay!  In addition, to the selection of masks, you can also find street art in the surrounding courtyard.  Free WiFi?  yes. 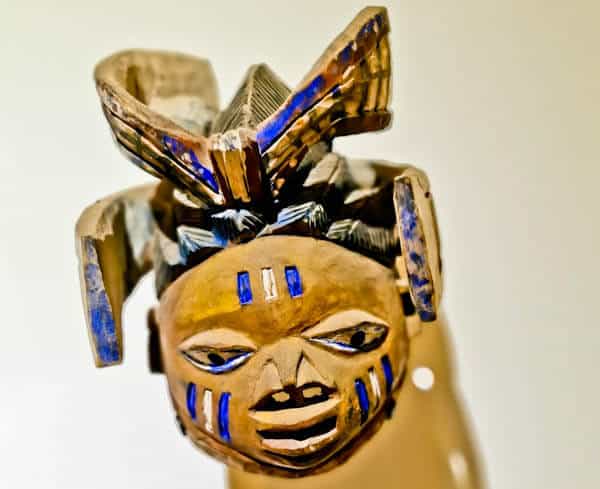 Photographers are welcome to capture all the masks throughout the museum.  With masks from Liberia, Ivory Coast and of course Senegal these photos will certainly complement your photography catalog.  Alternatively, they make for very interesting Instagram stories. 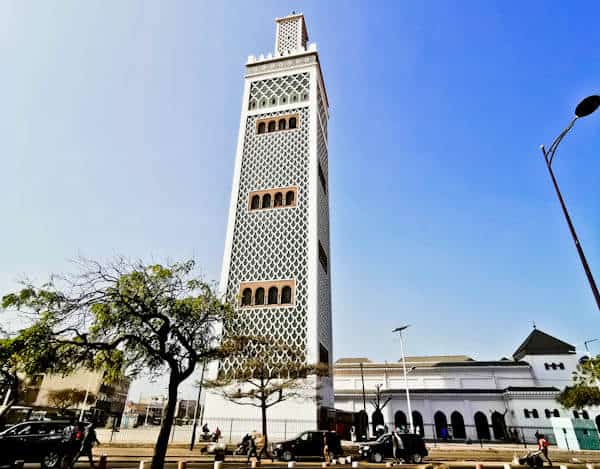 Believe it or not, the Grand Mosque of Dakar is not the biggest in Dakar.  However, it’s certainly noteworthy for its Moroccan architecture.  You guessed it, it was designed by a Moroccan architect.  Additionally, it was opened by King Hassan II of Morocco.  If you’re interested in Islamic architecture it’s free to visit the mosque but wear sensible clothes and avoid prayer time. 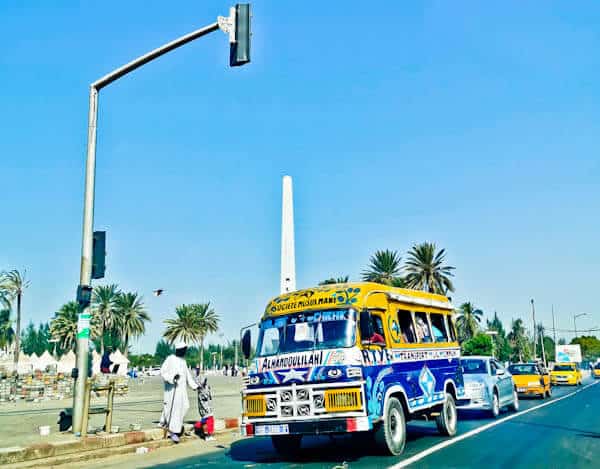 If one day Senegal win the world cup (or African cup), I’m sure the main celebrations would be held around Obelisk Square.  Today, parades or demonstrations can be held here.  If you check the writing on the obelisk it reads MCMLX.  These Roman numerals indicate 1960 which is the year Senegal gained independence from France. 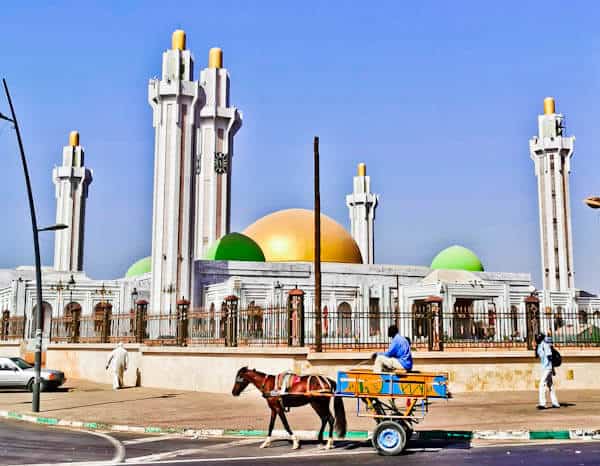 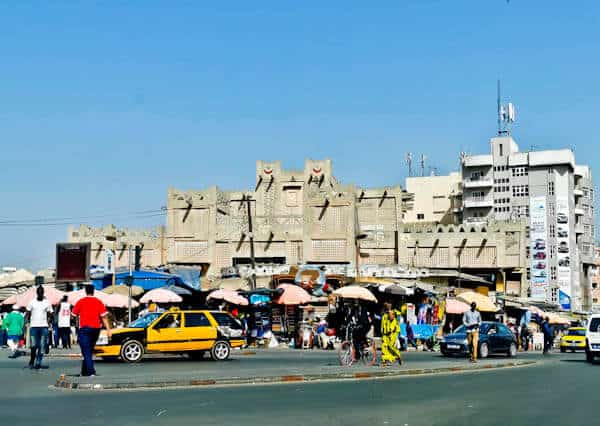 If you enjoy busy markets in huge capital cities then Sandaga market is for you. 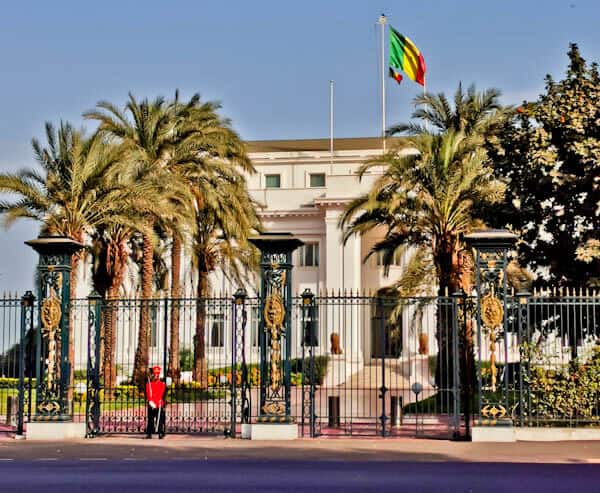 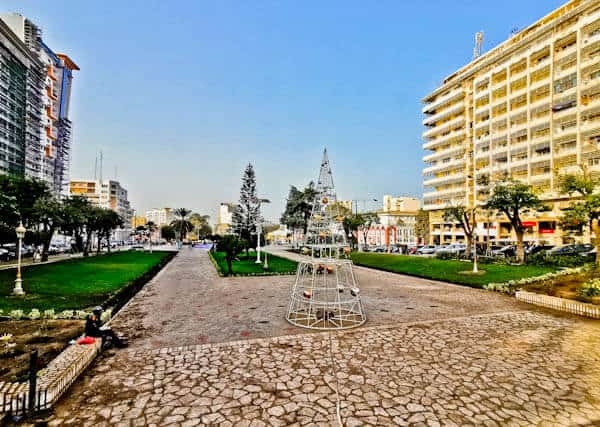 Independence Square, I guess is central Dakar’s answer to a green area.  It’s a huge open space surrounded by concrete buildings as well as a few French colonial buildings.  If you need to change money, there are a few good places surrounding the park.  It’s also a good place to sit down and chill out, that’s if no one annoying comes to bother you.  You can easily walk here from the Goree ferry terminal. 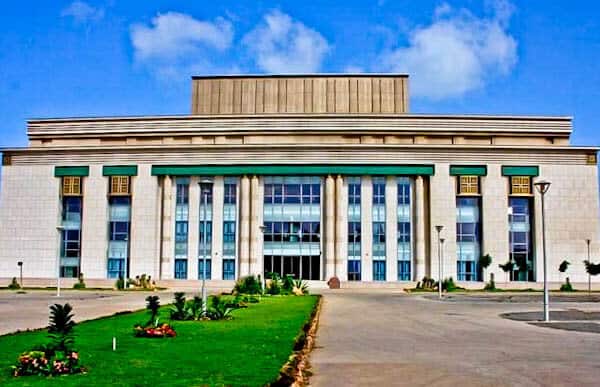 Dakar is home to a huge grand theater which is the largest in Africa.  The grand theater features both a stunning exterior as well as interior.  Check the schedule when you’re in town.

Adjacent to the Grand Theater is the new Museum of Black Civilizations.  The purpose of this museum is to show the history and culture of black people throughout the world.  Additionally, the museum is recalling any African artworks stolen throughout the years.  As you would imagine, as Senegal was a French colony the French stole a lot of artwork from the region.  Will they send any back from the museums in Paris?  Only time will tell. 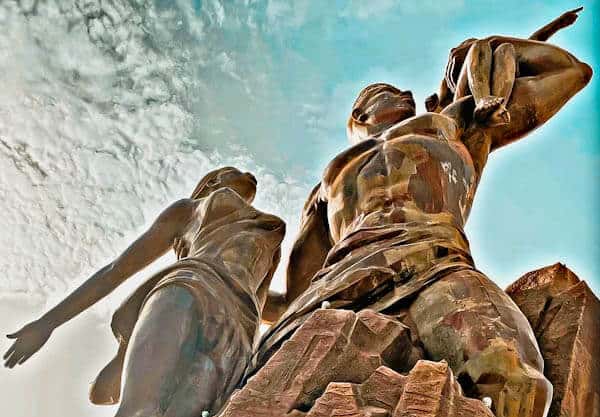 Firstly, the African Renaissance Monument is the tallest statue in Africa.  This fact alone warrants a visit.  It overlooks the Atlantic ocean therefore it’s also a wonderful sunset spot in Dakar.  Since inception the statue has caused controversy from the shape of the people to the fact it was built by a North Korean company. 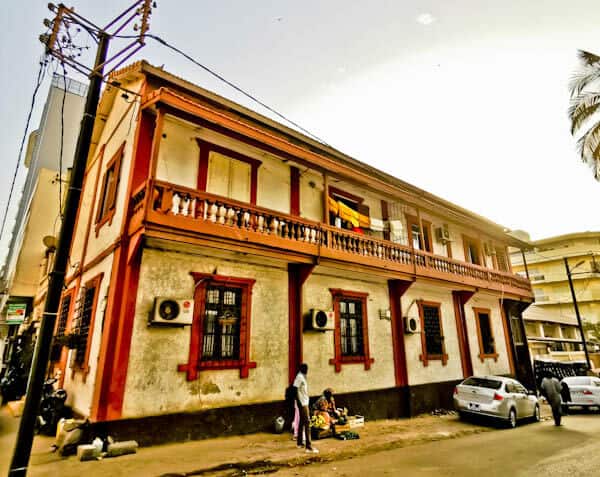 As you walk up and down the streets of central Dakar you’ll see a few French colonial buildings which are still in use today. 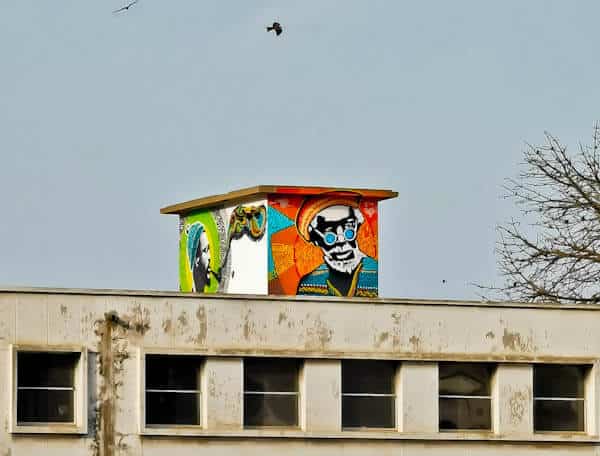 As you walk the streets of Dakar Senegal pay attention to the African street art which is dotted around the place. 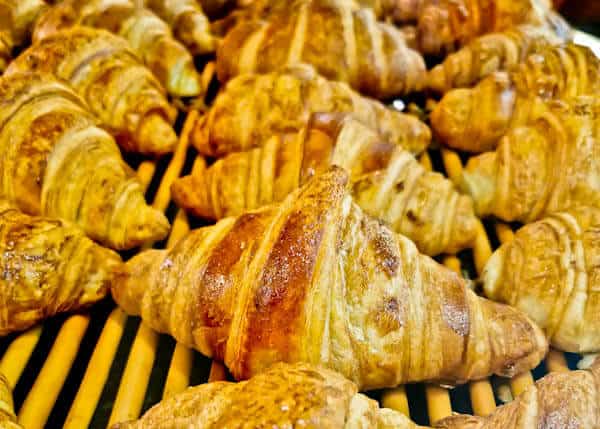 Of course Senegal is a former French colony.  For this reason you’ll see lots of French bakeries around the city.  Many French treats are on sale here including croissants, pain aux raisins, pain au chocolat and also the chaussons aux pommes. 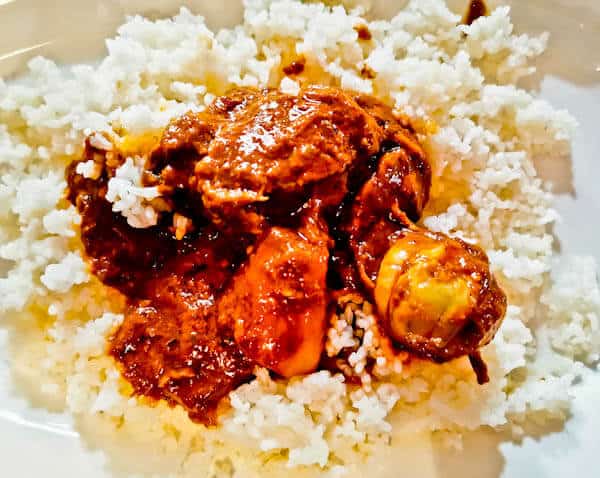 Simply put, when you visit Senegal you must try the local food.  One restaurant which is popular with locals and I highly recommend is located inside the Hotel San Louis Sun in the center of Dakar. 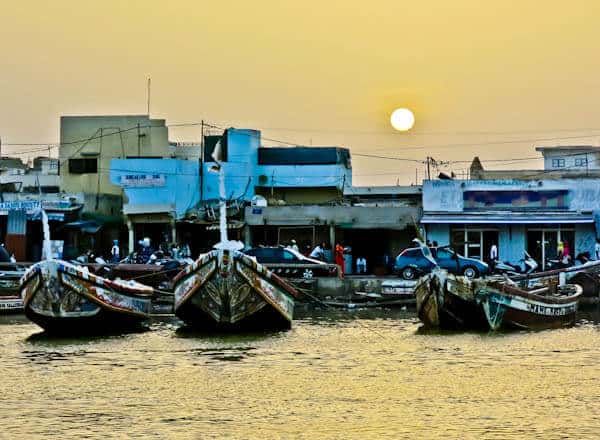 Saint Louis was the capital of French Africa.  For this reason, it’s been rewarded UNESCO status and is a hot spot for French colonial architecture.  Photographers will enjoy capturing the colorful fishing boats at sunset.  Moreover, the bridge which connects it to the mainland was designed by Gustave Eiffel.  Read more about Saint Louis Senegal and how to travel there by public transport.  I must confess a day trip may be a bit short therefore an overnight stay is more realistic.

Enjoy your Visit to Dakar Senegal

How to travel from Dakar to Banjul Gambia by land.

How to travel from Dakar to Bamako Mali by land via Tambacounda.

Things to do in Banjul Gambia.