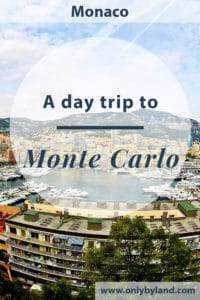 What to see Monte Carlo – Monaco One Day Itinerary

Monaco is the second smallest country in the world.  Things to see on a Nice to Monaco day trip are;

Hotels in Monaco are expensive.  For this reason I recommend you stay in Nice and take a Nice to Monaco day trip. 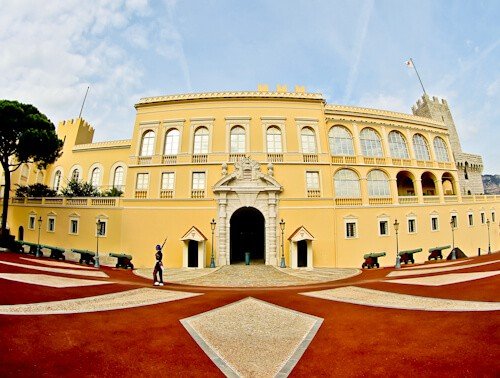 The Prince’s Palace is home of the Prince of Monaco, as a result it’s one of the top things to see in Monaco.  It was originally built as a fortress in 1191.  Because of the history of being a fortress it is one of the most unique palaces in Europe.  The royal family of Monaco have lived in this palace for over 700 years.  It’s the only palace this royal family of Monaco have ever lived in.  The reason for this is that Monaco is such a small country that there is no room to build more palaces. 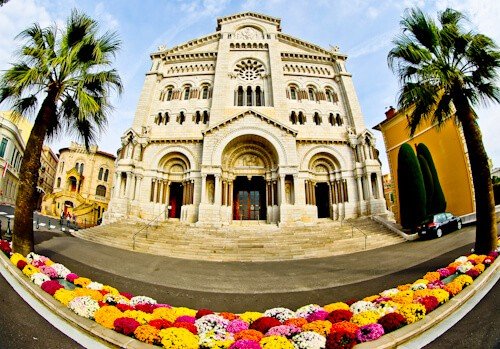 The Saint Nicholas Cathedral is also known as the Monaco Cathedral.  It’s located around the corner from the Prince’s Palace.  Many members of the Monaco  royal family were buried here.  One interesting tomb here is the tomb of Hollywood actress, Grace Kelly.  Grace became famous for her movies in the 1950’s.  She quit acting and married the prince of Monaco in 1956.  In fact, until her death in 1982 she was the princess of Monaco.  Grace Kelly’s husband, Prince Rainier III, was more recently buried in the Monaco Cathedral.  Additionally, Prince Rainier III was one of the longest serving monarchs in history. 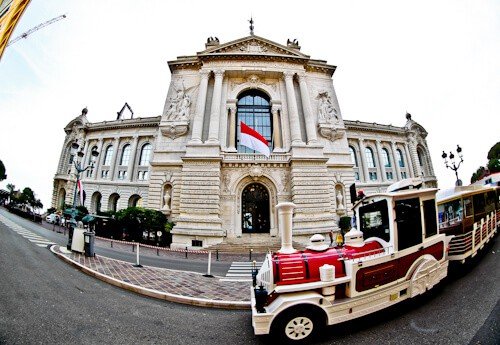 Perched on a cliff edge is the Oceanographic museum of Monaco.  This is the where the Mediterranean Science Commission is based.  The commission is a group of countries based around the Mediterranean.  It’s worth paying the entrance fee just to enter such a unique Baroque style building.  Everything you learn about marine science is a bonus!  Moreover, there’s an aquarium and examples of how the Monaco royal family have contributed to research in this field too.

For a Monaco Instagram spot you should try photographing this building from further along the cliff side.  You will get a wonderful shot of a majestic building which looks dangerously placed on the cliff edge.  Alternatively you could wait for a train shuttle to pass in front of it and photograph it. 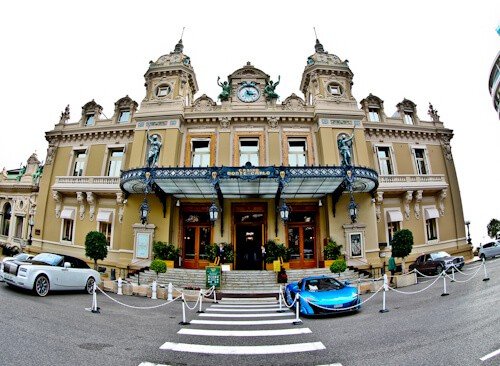 Arguably, of all things to see in Monaco, the Monte Carlo Casino is top of the list.  For this reason, you’ll see lots of tourist lined up outside taking selfies in front of the building as well as with the flash cars.  As a matter of fact, the casino has featured in many movies including, Golden Eye, Never Say Never Again and Ocean’s Twelve.  The casino does not have a hotel but is part of a chain which owns the most luxurious hotels in Monte Carlo.  You may enter the casino but you must respect their dress code.  Upon entry your ID will be checked, this is because citizens of Monaco are forbidden to enter the gambling rooms.

See a piece of work by Gustave Eiffel 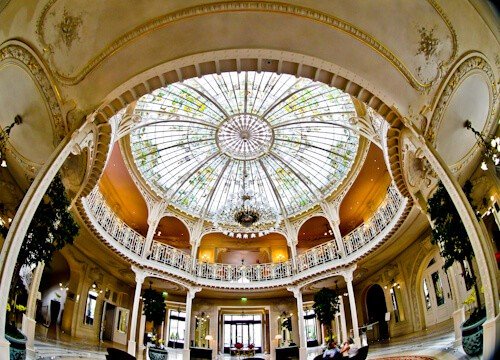 In the Eiffel lobby of the Hotel Hermitage is the Eiffel cupola.  In complete contrast to the cupola on the Nice Observatory, this is one of his more majestic pieces.  It’s made of glass and steel and of Art Nouveau style.  An interesting fact is that the cupola is signed by Gustave Eiffel himself.  You could stay in a good hotel in Nice for a week for the price of one night in the Hotel Hermitage.  However, you’re welcome to walk in to view and photograph the Eiffel cupola but must respect the guests and dress code. 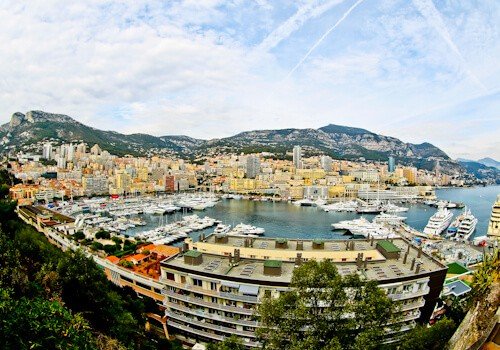 Port Hercules is more commonly known as Monaco harbor.  On Port Hercules you’ll see where the rich and famous moor their yachts.  In fact, some of the private yachts you see could be easily mistaken for cruise ships!  In addition, the harbor is lined with bars and restaurants.  If you visit during October / November there is Monaco fair around the harbor.  The fair is perfect for those traveling to Monte Carlo, Monaco with kids.  You may recognize the harbor from the James Bond movie, Golden Eye.  It’s also famous from the Monaco grand prix.  Furthermore, a panoramic of the harbor is one of the top things to see in Monaco. 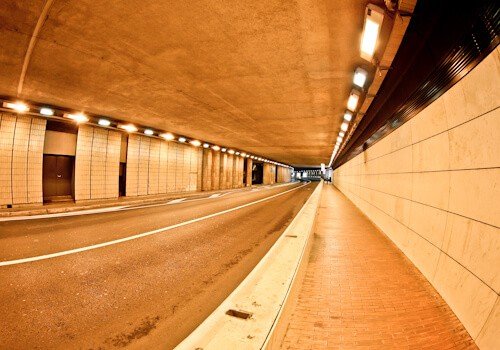 For 2 weekends each year in May, Monaco is turned into a grand prix circuit.  Overall, it’s probably the most famous street race in the world.  It’s said that the Monaco grand prix is the most difficult race on the circuit.  It has the fastest and slowest turns, as well as the famous tunnel (above).  The tunnel runs under the famous Fairmont Casino Hotel.  The Monaco grand prix has been running regularly since 1929.  Many famous drivers have raced the circuit.  Famous drivers to have won here are, Jackie Stewart, Graham Hill, Alain Prost, Ayrton Senna, Michael Schumacher and Lewis Hamilton. 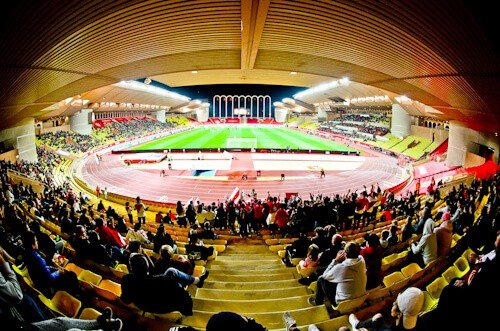 Watching a football match is one of the least popular things to see in Monaco.  For this reason, it’s easy to get a ticket and as cheap as 10 Euros.  Nevertheless, AS Monaco is one of the best teams in the French Ligue 1.  In addition, the stadium also hosts athletics events.  In fact, the Diamond League has an annual meet here.  Furthermore, you can also take a stadium tour of the Stade Louis II during the summer months.  Read about my exciting matchday experience at the Stade Louis II.

How to get to Monte Carlo, Monaco from Nice – Nice, France to Monaco Distance 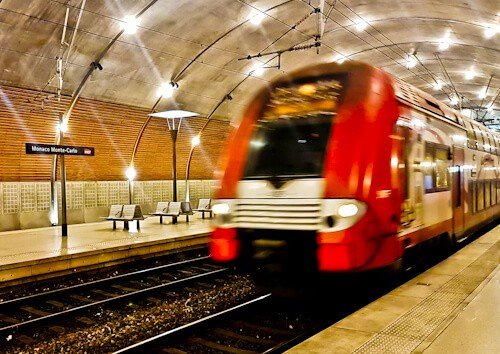 What to see in Nice and how to visit the Nice Observatory.