Elland Road is the 20th largest stadium in the UK and home to Leeds United.  Reasons to take a stadium tour of Elland Road;

I was staying at a hotel in Leeds city center and walked to Elland Road.  As a matter of fact, I stayed in the DoubleTree by Hilton which is where the Leeds United players stay before matchday. 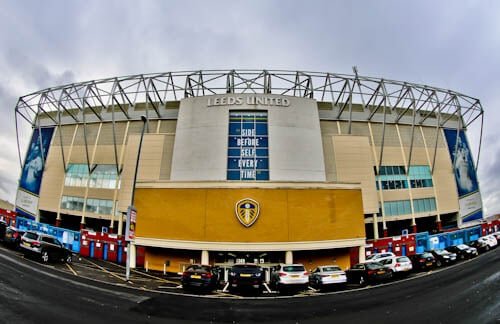 Elland Road stadium is in the Holbeck district of Leeds around 2 miles from the city center.  The M621 motorway runs adjacent to the stadium.

How to get from Leeds Train Station to Elland Road

Firstly, you can walk on a mostly pedestrianised path to the stadium which takes around 40 minutes.  Alternatively, you can take bus 51 or 52 from the city center.  Buses leave from Vicar Lane which is a 7 minute walk from the train station.  They conveniently stop right outside the Billy Bremner bar from where you can also return to the city center. 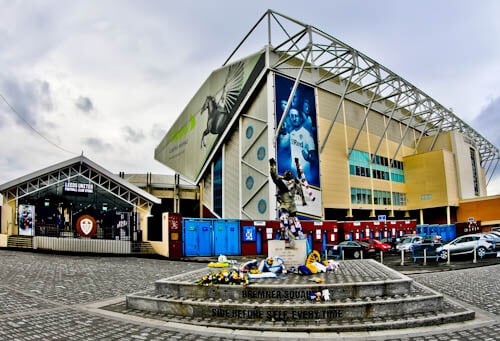 Billy Bremner is a Leeds United legend.  Originally from Scotland, he moved to Leeds in 1960 and became the Leeds United captain.  An interesting fact is that his father encouraged him to move to England to avoid the religious rivalry between Celtic and Rangers.  With Billy Bremner as captain Leeds won the League twice as well as the, FA Cup, League Cup and Fairs Cup (Europa League).  To this day, this is the most successful period in Leeds United history.  Lastly, if you visit the Scottish Football Museum in Hampden Park you’ll see his name in the Hall of Fame. 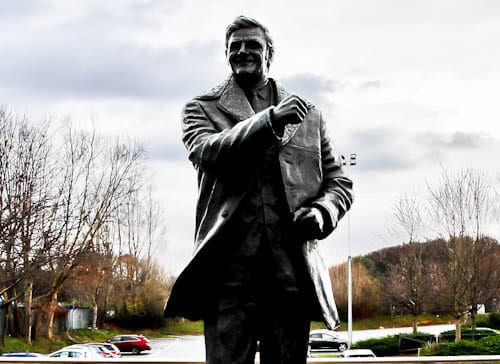 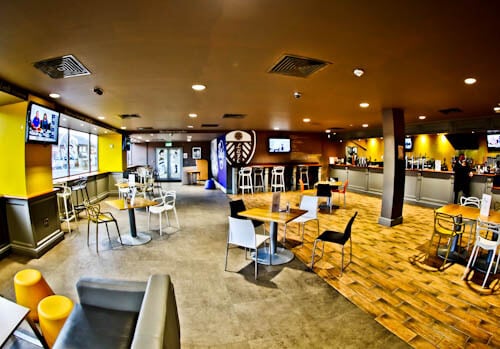 The stadium tour kicks off from the Billy Bremner bar.  If you arrive a little early you can buy yourself a drink and admire the memorabilia on display.  Take note of the Billy Bremner mural where he’s sat on a wall beside the dugout.  This wall still exists and you can recreate this iconic moment yourself during the tour.  Finally, I recommend you use the bathroom here before the tour starts! 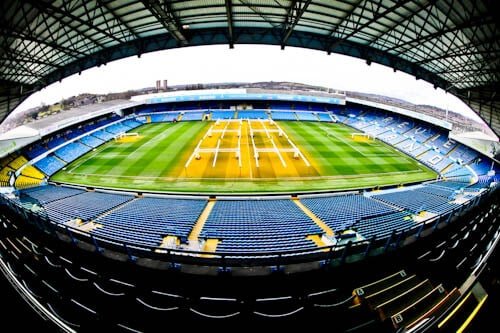 The Elland Road capacity is 37,890, as a result it’s the 20th largest stadium in the UK.  It’s made up of the Don Revie, John Charles as well as the East and South stands.  Elland Road famously hosted 3 Group B games in Euro 96.  Did you know Elland Road used to be a rugby stadium?  As a matter of fact, there’s a valuable painting hanging in the President’s Suite at Twickenham which features Elland Road.

Elland Road in the Movies

Elland Road has featured in 2 popular movies.  Firstly, The Damned United which is about Brian Clough’s infamous spell at Leeds United.  Secondly, Elland Road featured in the Oscar winning movie, The King’s Speech.  Although the real speech took place at Ibrox in Glasgow the speech in the movie was filmed at Elland Road. 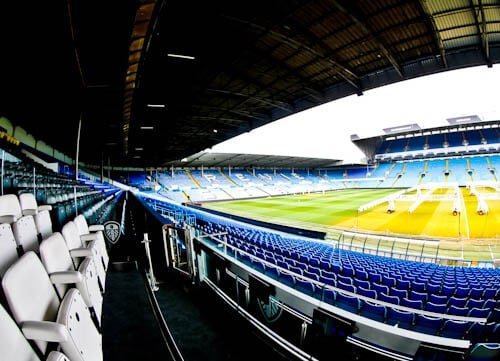 The comfiest seats with arguably the best views of the pitch are in the Director’s box.  You’re welcome to sit and pose for pictures here.  Imagine sitting here when Leeds United won the league.  Another interesting moment in Elland Road history is when the Queen visited in 1977 as part of her jubilee celebrations.  Additionally, the rock band, Queen have also performed at Elland Road.

Above the Director’s Box and much of the John Charles stand is the Elland Road media section.   An interesting fact is that this is the biggest media section in British football.  Why do Leeds United have such a large media section?  When the stadium was inspected for the Euro 96 competition, the media section was not large enough.  Leeds did not want to miss out on being a host city therefore built a huge section for the world media to cover Euro 96.  This extended media section remains today. 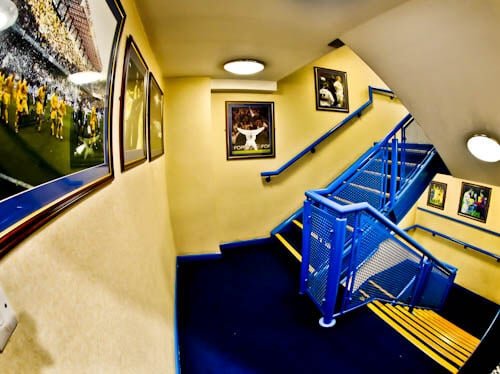 The biggest success Leeds United had in Europe was in 1968 when they won the Europa League.  However it’s the run to the Champions League semi finals which they are most remembered for.  As part of the tour you’ll walk a staircase full of memorabilia from this famous cup run. 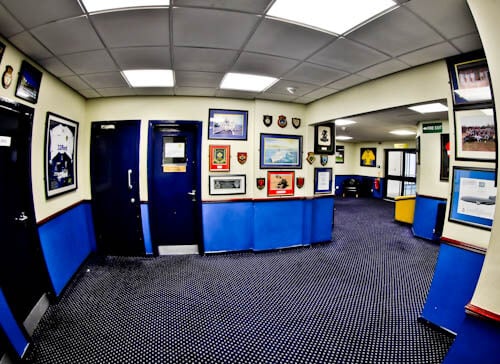 At the bottom of the Champions League staircase is the Leeds United museum.  Here, you’ll find the hall of fame as well as famous players shirts.  There’s even a Billy Bremner Scotland shirt as well as a Jackie Charlton England shirt.  Additionally, there are gifts from other teams which have visited Elland Road.  I’ve visited Partizan Belgrade so I was drawn to a gift on display from this club. 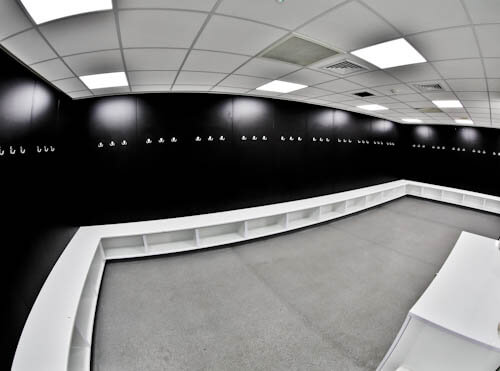 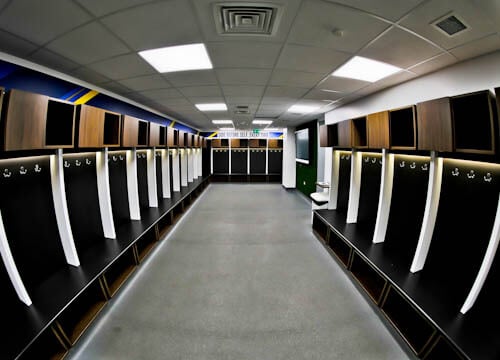 The Leeds United dressing room is narrow and compact.  Moreover, it’s homely with the Leeds United banners.  Due to its compact design, there’s a true feeling of team spirit.  As well as a compact team dressing room, Leeds United also have access to excellent bathroom, warm up and physio facilities. 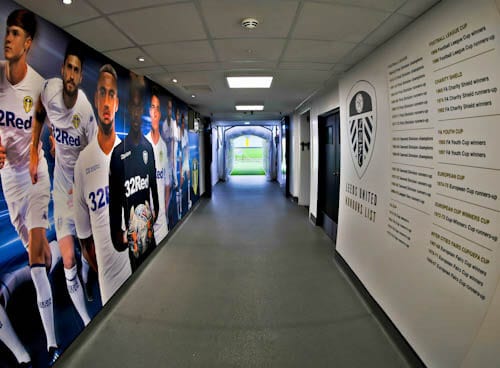 Leeds United intimidate their opponents in the players tunnel with huge images of their current squad.  Opposite the image is the Leeds United honors list.  This is a list of all the trophies they have won.  For me, it was especially interesting to see the successes of Leeds United.  Not just the 3 famous league wins but also the occasions when they have won the lower leagues. 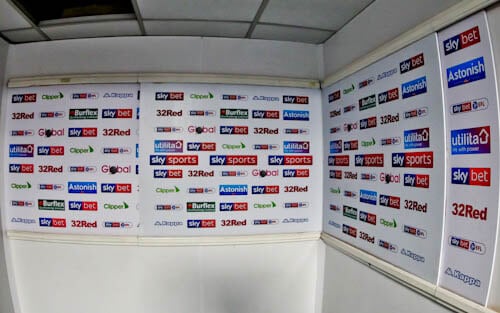 Adjacent to the players tunnel are the flash interview rooms.  They are here so the media can grab the players and give them a quick interview.  The interview must happen in front of the boards for sponsorship reasons.  Due to the fact you always see these on TV, these are an incredibly popular photo spot. 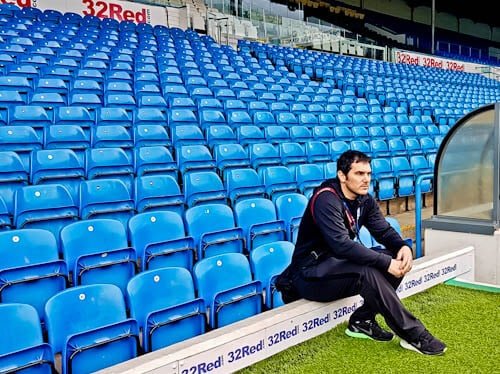 You’re invited to sit in the dugout when you reach pitchside.  So why did I choose to sit on a wall adjacent to the dugout?  Because there’s a painting of Billy Bremner sat here in the Billy Bremner bar at the start of the tour.  Don’t miss it!  A nice touch here is that there are complimentary Leeds United flags for the kids.

When the East Stand was completed in 1992 it was the biggest Cantilever stand in the world.  This stand alone had a capacity of 17,000 spectators.  The capacity has since been reduced but it’s still one of the largest stands in English football nonetheless. 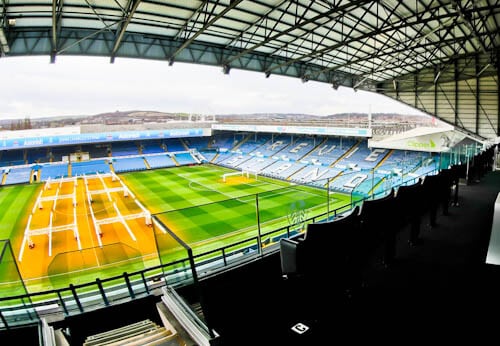 The last stop on the Leeds United stadium tour is the Legends Club.  Not only does this give a wonderful stadium view but you also learn about the Legend’s Club facilities.  If you buy Legend’s Club tickets for a match you’ll receive a true VIP experience.  All food and drink is included with the ticket.  In addition, Leeds United legends such as Danny Mills, Ian Harte, Gary Kelly and Lee Bowyer regularly frequent the club.  As a result, you can watch the match, enjoy the food as well as meet and greet Leeds legends.  Of course, the legends are also happy to take selfies with you.  As part of the stadium tour, you see the facilities but unfortunately no legends are there. 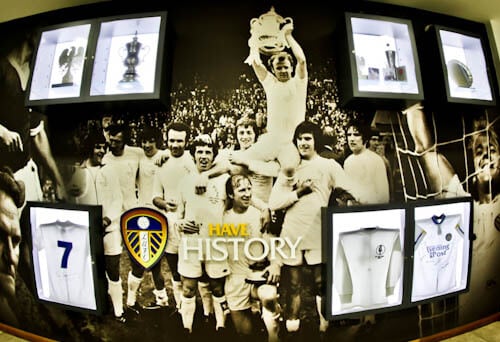 The Elland Road stadium tour is an excellent experience.  Unfortunately, tours are not so frequent therefore you can’t just turn up and take one.  But they’re most likely to be scheduled on match days.  Check the schedule and book your stadium tour online.  Alternatively, why not watch a Leeds United football match?

Other famous stadiums in the north of England include, Hillsborough, Anfield, Etihad and St James’ Park.