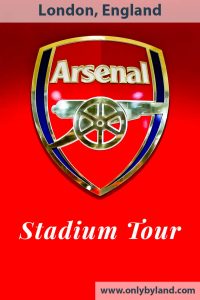 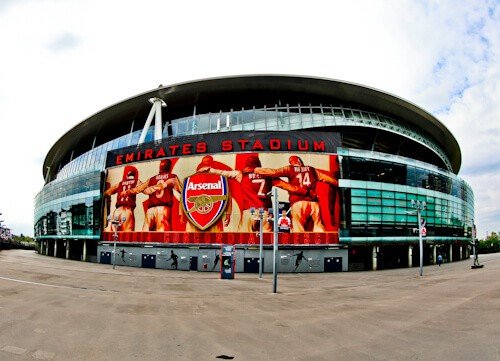 The Emirates stadium is located in North London.  You can reach the stadium by taking the London Underground Piccadilly line to Arsenal station.  Alternatively, you can take the tube to Finsbury Park as well as Highbury and Islington.  These are served by the Victoria and Piccadilly lines.  All these stations are in zone 2 of the underground as the Emirates stadium is very close to central London.  However you arrive to the Emirates stadium, you’ll be greeted with the impressive stadium exterior.  Furthermore, Arsenal station is the only station on the underground named after a football club. 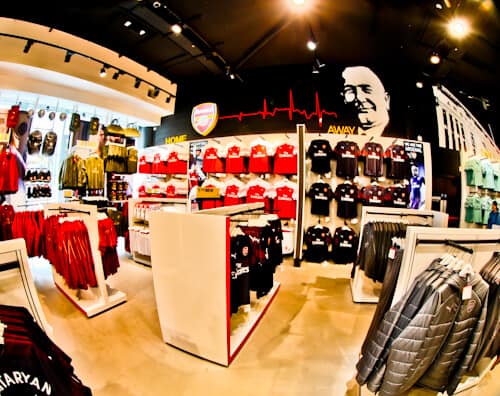 The Arsenal stadium tour starts from the club shop.  As the tour is self guided, you can spend as much time in the store before you start.  This is a good time to check out the Arsenal merchandise and the store is huge so there is no shortage of it!  You can even buy an Arsenal shirt with your name printed on it.  An idea would be to buy yourself an Arsenal shirt before taking the tour, therefore you’ll be in your Arsenal attire in your pictures. 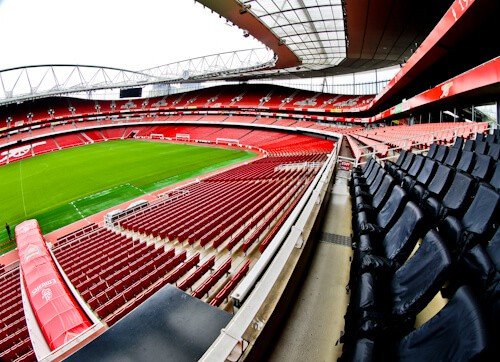 The best seats in the stadium are of course the directors seats.  Not only are they the comfiest seats but they also have the best view.  Having said this, I would be happy with any seat in the stadium to watch a match!  You’re welcome to take as many pictures as you want from this viewpoint but remember, later on you’ll be going pitchside. 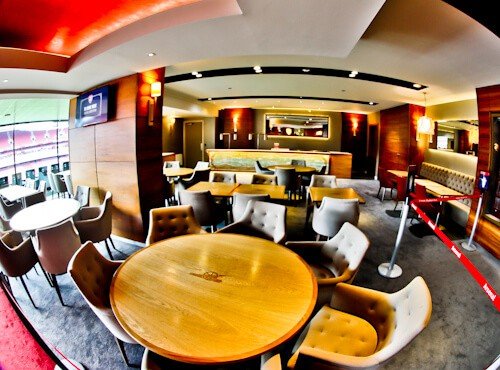 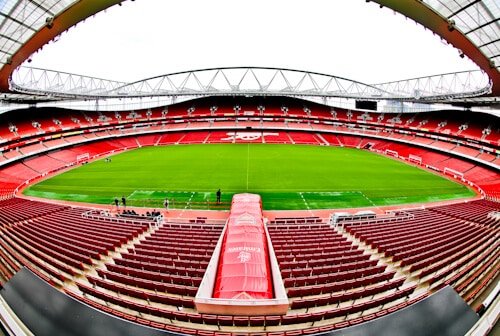 Emirates stadium has a capacity of around 60,000.  As a result it’s the 8th largest stadium in the UK.  Arsenal moved to the Emirates in 2006 from their old stadium, Highbury.  Highbury was famous for having one of the best playing surfaces in English football.  To maintain Arsenals ‘perfect pitch’ reputation, the stadium was designed to let in as much light as possible.  Additionally, the famous clock from Highbury is located on top of the stadium.  There are also 2 more iconic clocks in the stadium, 1 on the South stand and another in the Diamond lounge. 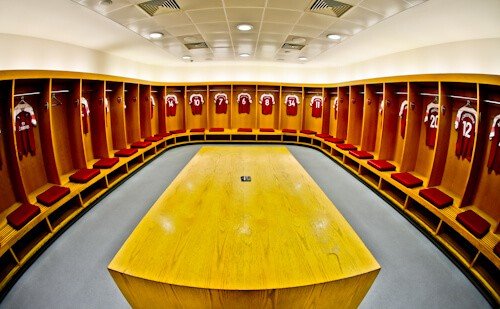 The Arsenal home team dressing room contains the shirts of the current Arsenal squad.  Which is your favourite Arsenal player?  You’re welcome to pose for pictures in his changing area.  Many Arsenal legends have used these facilities including Thierry Henry, Alexis Sanchez, Aaron Ramsey, Petr Cech and Mesut Ozil. 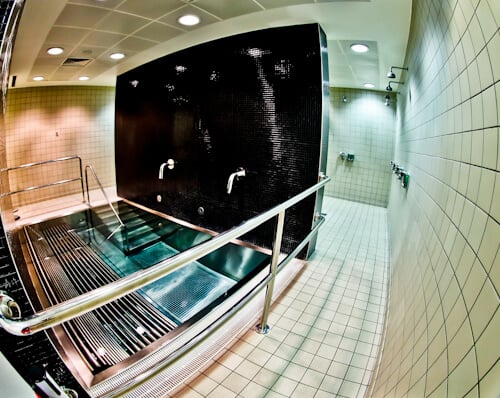 As well as the dressing rooms, the Arsenal team have access to some excellent facilities.  There are showers, a warm up area, a massage area and lots of extras the away team don’t have access to. 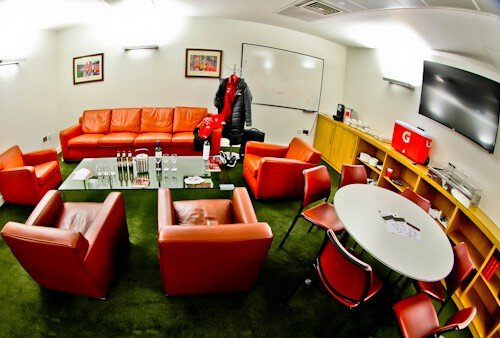 Something unique about the Arsenal stadium tour is that you have access to the Head Coach’s office.  This is where Arsene Wenger spent 11 years as Arsenal coach.  I visited when Unai Emery was the coach.  For this reason there were a few bottles of San Miguel beer on display! 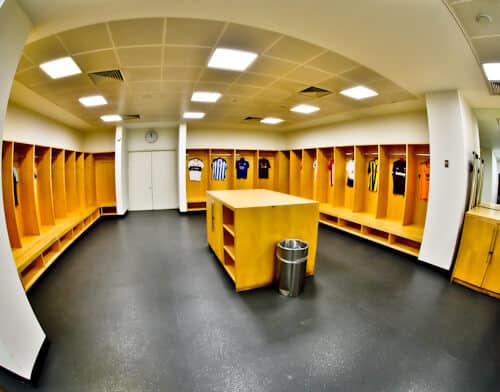 The away team dressing room are impressive but with less facilities than the home teams.  Shirts on display in here are from the teams which have played at the Emirates.  Arsenal have faced opposition such as Barcelona, Bayern Munich, Porto, Man Utd, Liverpool, Olympique de Marseille and AS Monaco.  As a result several legends have used these dressing rooms including Lionel Messi. 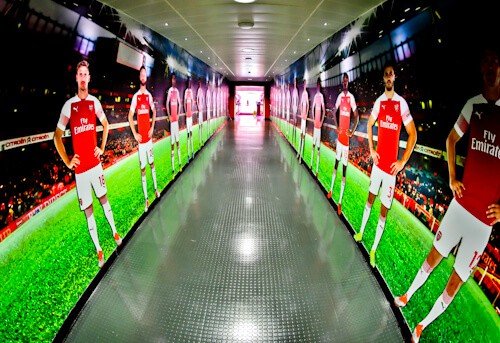 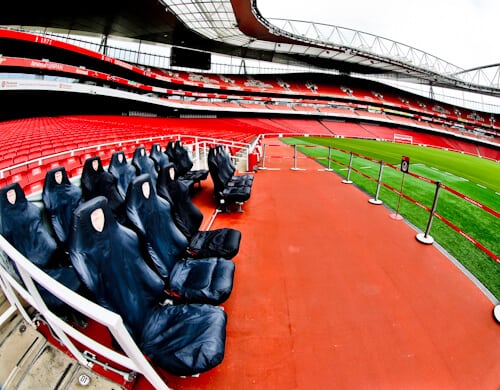 You’re invited to sit in the dugout and take pictures.  If you bought yourself an Arsenal jacket in the club shop you could do the famous Wenger action of trying to put his hands in his pockets.  Furthermore, you could pose as an Arsenal manager yourself and point to the pitch. 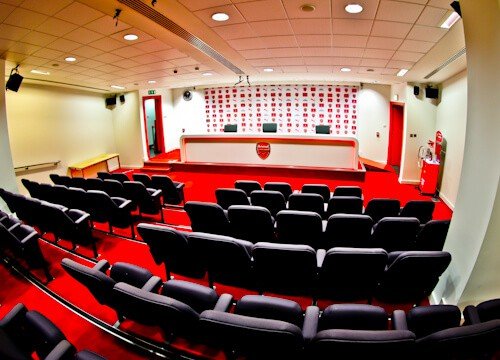 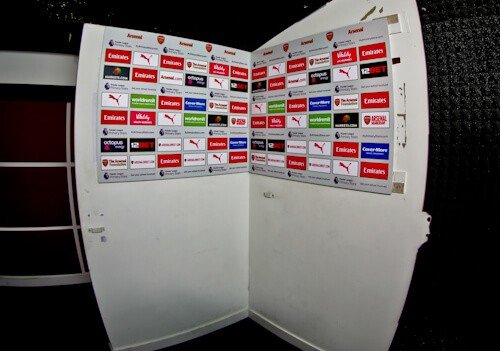 The flash interview rooms are another good place to make a YouTube video.  The manager and a few players will give a quick interviews here after the match. 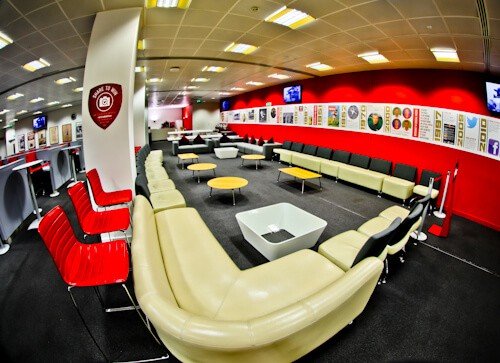 Of all the stadiums tours I have taken, the Emirates stadium has by far the best media lounge.  You can see the area the journalists and photographers have access to.  In this area they can upload photos and stories from the game or any new transfer news.  It’s an excellent area and Arsenal obviously value their relationship with the press.  Imagine the chaos in here the day Arsene Wenger announced his last season! 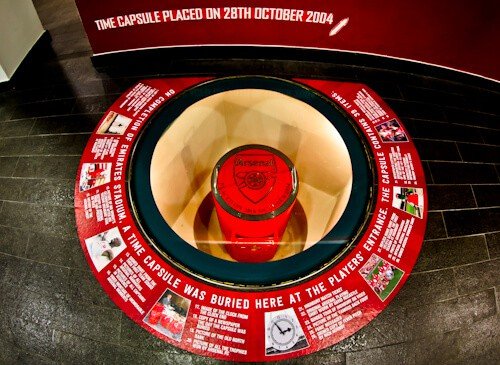 Arsenal played at Highbury for over 90 years, as a result it holds a lot of Arsenals rich history.  Inside the Emirates stadium is a Highbury time capsule to honor their Highbury era.  There are 39 historic items inside this time capsule including;

It’s worth taking a few moments to read the list as there are several items of historical importance. 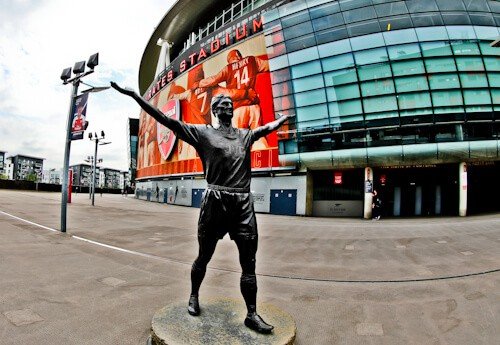 Who is your favourite Arsenal legend?  It’s possible to take a stadium tour guided by an Arsenal legend.  Legend tours are given by Nigel Winterburn, Perry Groves or Charlie George.  Check the schedule to see if there is a legend tour when you visit.  Another option is a VIP legend experience, these tours include access to parts of the stadium no other tour can access.  Furthermore, you can experience the fine dining in the Diamond Club.  Former players which give VIP legend experience include, Ray Parlour, David Seaman, Martin Keown or Lee Dixon. Of course, a photo opportunity with Yorkshireman David Seaman is priceless! 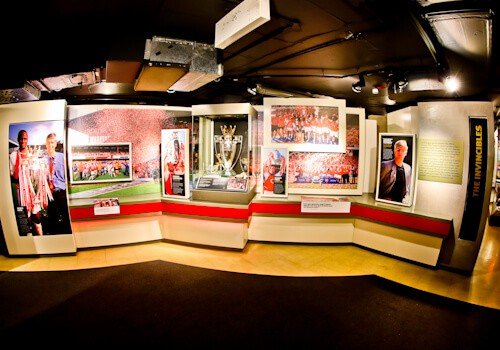 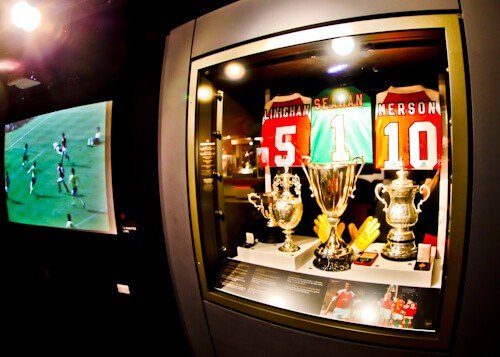 There are several trophies and several signed legends shirts on display in the museum.  In addition there are TV monitors replaying the important historic matches which Arsenal participated in.

How to get to the Emirates Stadium from Central London 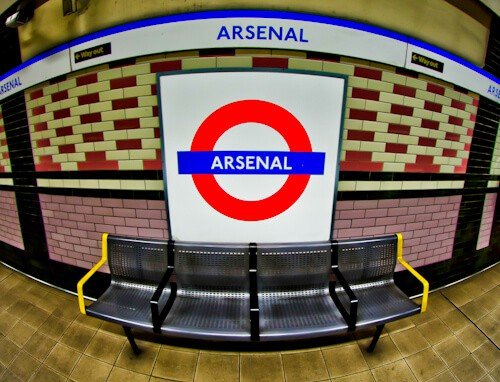 I highly recommend you take the Piccadilly line northbound to Arsenal station.  The reason for this is not only because it’s the closest station to the Emirates stadium but also because you can take some photos in ‘Arsenal’ station.  For an Arsenal fan, a photo with the iconic tube logo named after Arsenal is a good warm up to seeing the stadium itself!

Enjoy your Arsenal stadium tour and book in advance online for the best prices.