Ephesus Turkey + Things to do in Selcuk

Ephesus is an ancient Greek city founded in the 10th century BC and abandoned in the 15th century.  A few kilometers from Ephesus is the modern day Turkish town of Selcuk.  Things to do in Selcuk and Ephesus Turkey include;

I highly recommend you stay in Selcuk and visit Ephesus independently.  As a result, not only will you find an incredibly good value Selcuk hotel but also be able to visit the sites when the tour groups have gone home. 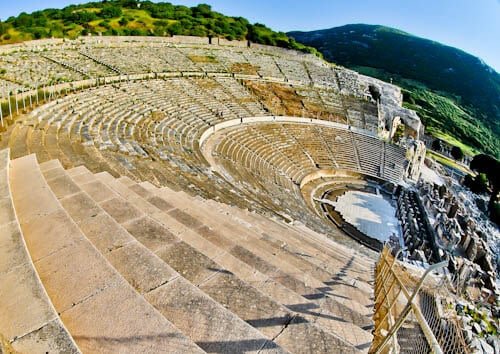 Firstly, in my opinion, the Great Theater of Ephesus is just as impressive as the Colosseum of Rome.  What’s more, there’s a chance you could be sitting alone in this theater!  As an example, view my picture.  Imagine the photography possibilities in this huge empty stadium for those who love to dress up for unique Instagram shots.  The Great Theater you see today was built during the Roman era.  You can see this because as with many other Roman theaters, it’s built on a hillside.   Be sure to check out the marble seats which were reserved for VIPs.  What kind of shows were performed at the Great Theater?  As well as Gladiator fights, the theater would host religious / philosophical discussions, plays and concerts.  It has a capacity of 25,000.  Have you ever seen a 3 tier Theater before? 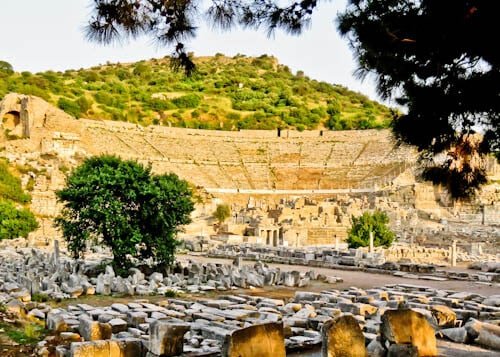 In front of the Great Theater are the ruins of the Gymnasium.  The Gymnasium included a frigidarium, warms pools as well as training rooms.  Finally, you get a true perspective of the enormity of the Grand Theater from the Gymnasium. 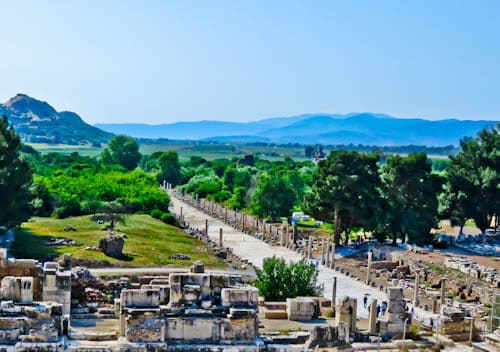 Also known as Harbor Street, the half kilometer long Arcadian Street runs directly away from the Great Theater.  The street lead to the port, for this reason, sailors and traders would arrive at Ephesus on this street.  Now, a ruin of a main road, imagine how bustling it was back in the day. 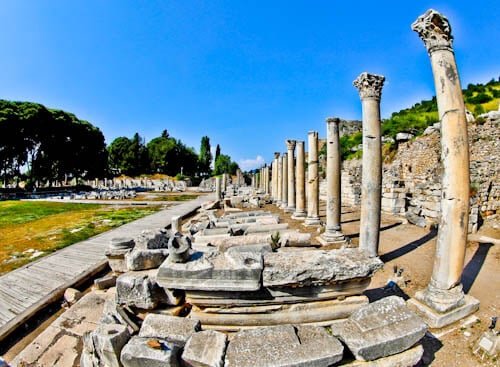 The road which runs parallel to the Great Theater is Marble Road.  An interesting fact is that this road makes up part of the Sacred Way to the Temple of Artemis. 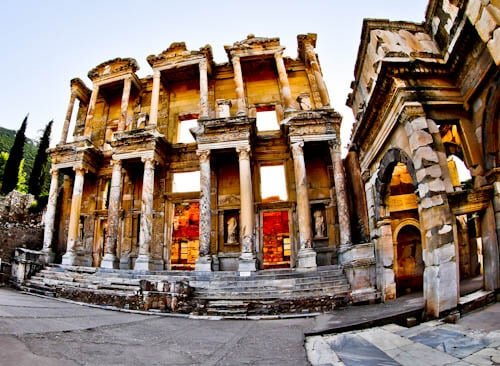 Celsus Library is a popular Instagram spot, for this reason it’s almost always surrounded by tourists.  As I chose to visit Ephesus independently, I had the library to myself (albeit briefly!).  Nonetheless, what is the Celsus Library?  It is in fact a mausoleum in honor of Gaius Julius Celsus Polemaeanus.  The statues you see in the facade are Sophia, Episteme, Ennoia and Arete.  As a matter of fact, these are replicas and the originals are on display in the Ephesus museum in Vienna, Austria.  Lastly, adjoining the Celsus Library is the Gate of Mazeus and Mythridates. 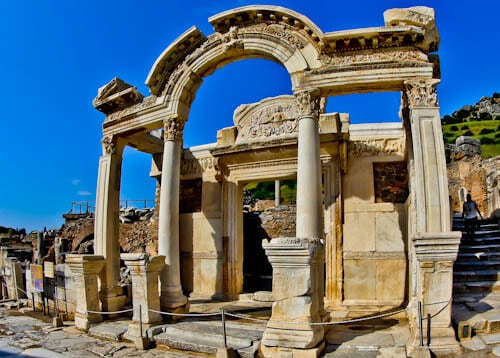 The Temple of Hadrian is a temple which of course honors Roman Emperor Hadrian.  If you look closely, you’ll see a base in front of the temple.  This was the base to statues of Diocletian, Maximian, Constantius I, and Galerius.  Sadly however, these statues have gone missing.  Did you know that the Castel Sant’Angelo in Rome is the mausoleum of Hadrian? 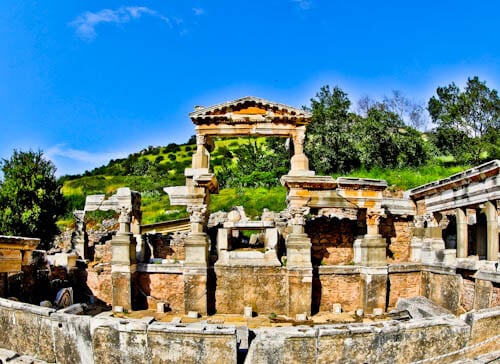 The Fountain of Trajan is an honor to the Roman Emperor Trajan.  What you see today is quite majestic and one of the better kept ruins of Ephesus.  However, with a little imagination you can transport yourself to a past version.  There was a statue of Trajan in the center of the facade overlooking a pool.  In addition, there were statues of Dionysus, Satyr and Aphrodite which are now on display in the Ephesus museum of nearby Selcuk. 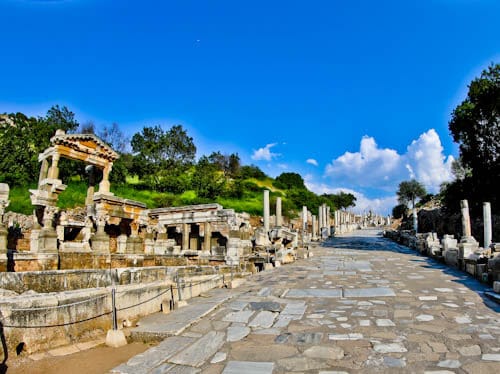 As you walk up Curetes Street from Celsus Library, you’ll pass several of the points of interest of Ephesus.  A popular Instagram spot in Ephesus is the Hercules Gate which you’ll walk under on Curetes Street.  Finally, Curetes street is sloped because it connects upper and lower Ephesus.

Domitian Square and Temple of Domitian 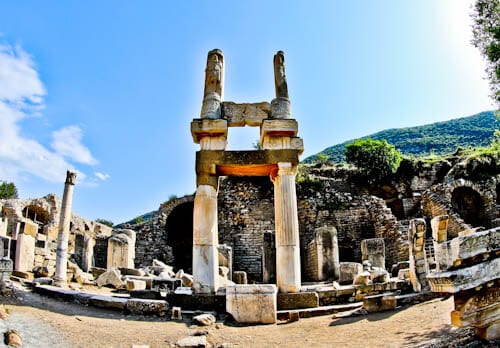 An interesting fact about the Temple of Domitian is that it was the first temple to be named after an emperor.  In front of the temple remains is Domitian Square.  Now, an uninspiring ruin, it was once the tallest temple in Ephesus. 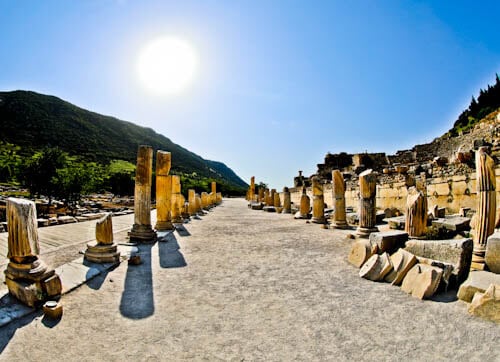 The Basilica was a huge 160 meter long rectangular shaped building.  It was not home to religion but home to the stock exchange and other business related activities.  Unfortunately, the Basilica was destroyed by an earthquake in the 4th century. 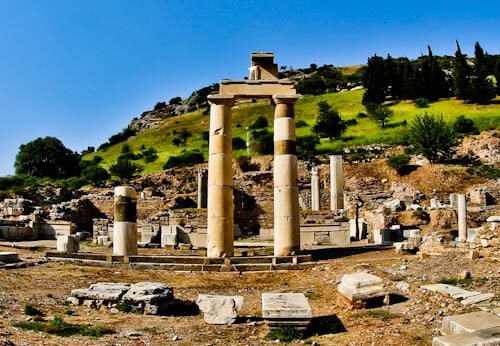 Adjacent to the Basilica is the Prytaneion.  It is here where religious ceremonies were held.  Additionally, there was an eternal flame burning symbolizing the life of Ephesus.  Sadly, like Ephesus itself, the flame no longer has life. 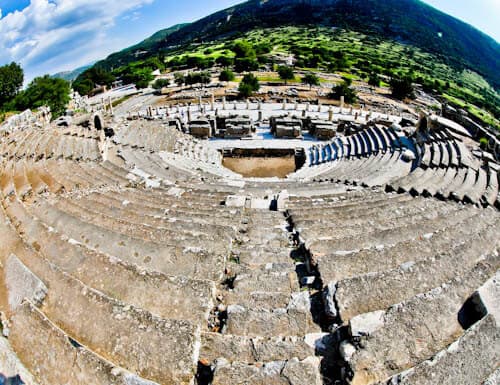 If it wasn’t for the Great Theater, the Odeon would gain much more attention.  It’s prime use was for official political meetings.  You could say it’s a historic version of a modern day parliament such as the Scottish parliament in Edinburgh.  In addition, concerts were performed here.  Finally, the capacity is 1500 spectators therefore tiny in comparison to the Great Theater. 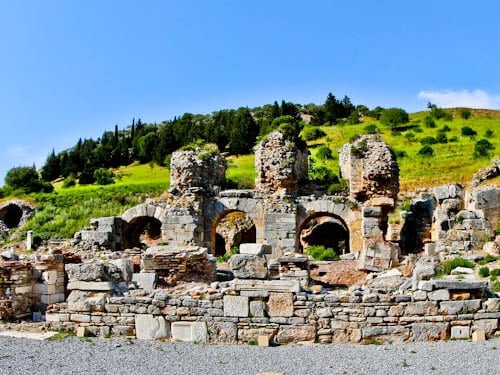 The Bath of Varius is built on a marble floor.  It features 3 bathing options.  You could choose either cold, room temperature or a hot bath. 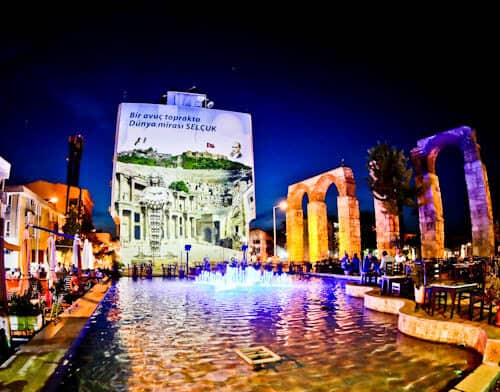 It’s highly likely you’ll stay in Selcuk if you visit Ephesus independently.  Another reason to stay in Selcuk is that hotels in Selcuk are excellent value.  In addition, Selcuk is full of good value restaurants and cafes.  As you walk around town you’ll find a Byzantine Aqueduct as well as several mosques.  However, the main things to do in Selcuk are, Temple of Artemis, Ephesus Museum, Ayasoluk Castle and the Basilica of St John.

Temple of Artemis – Ancient Wonder of the World 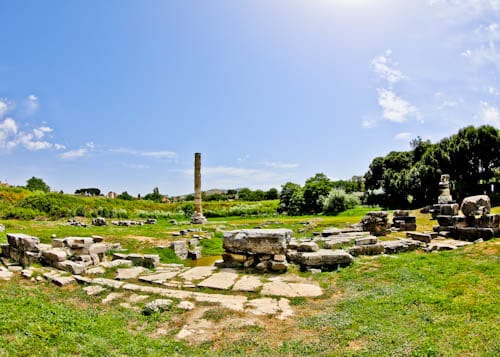 The Temple of Artemis is one of the seven ancient wonders of the world.  It was a temple dedicated to the Greek Goddess Artemis.  Not much remains today but it was once something great!  I recommend the Ancient History Encyclopedia for images of how it originally looked. 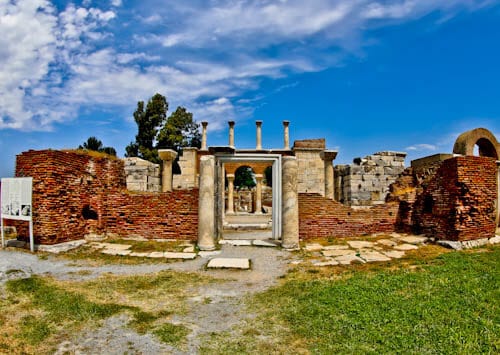 The Basilica of St John was built in the 6th century on the burial site of John the Apostle.  John the Apostle was one of Jesus’s 12 apostles.  As well as viewing the remains of the once great basilica, you can visit his believed burial site. 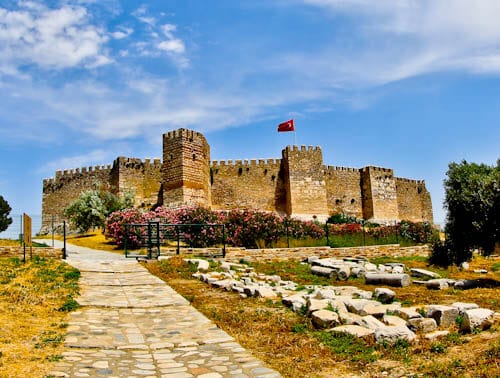 Entry to the Basilica of St John also includes entry to the Ayasoluk Castle.  For this reason, it’s worth walking up the hill to enter the castle.  However, it’s from the path where you get the best view of the castle.  As a matter of fact, I would describe this as the top Instagram spot in Selcuk.  Once at the castle you can admire panoramic views over Selcuk.  Finally, the castle was built in the 6th century under Byzantine rule and has since been under control of the Selcuks as well as the Ottomans. 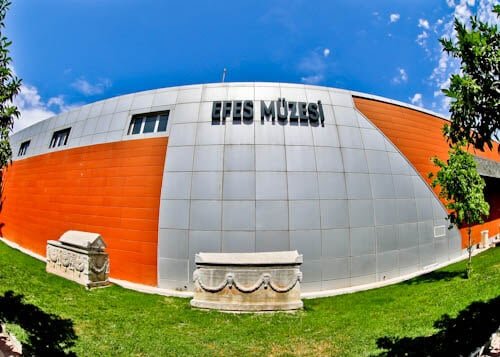 The Ephesus museum in Selcuk complements your visit to Ephesus proper.  Additionally, there are several artefacts not only from Ephesus but also from the Temple of Artemis on display inside.  Most importantly, there are images of how these wonders looked in their original state.  As a matter of fact, it’s probably better to go here first so when you visit Ephesus and the Temple of Artemis you can visualise how they were then in comparison to now. 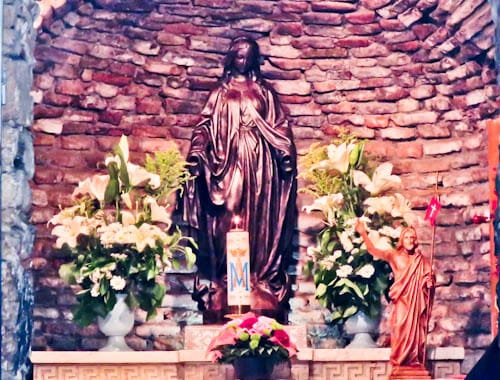 To visit the House of Virgin Mary on the outskirts of Ephesus you must take a tour or a private taxi.  I used the private taxi option which is definitely the best.  As a result, you’ll be visiting the house alone, as opposed to with a bus load of tourists.  Photography inside the house is forbidden and you’ll be strictly monitored by security.  Even from outside I had to discreetly photography the interior.  It’s believed this was the house of the Virgin Mary and today it’s a chapel.  Lastly, due to the religious significance of this building, several Popes have visited.

How to travel from Selcuk to Ephesus 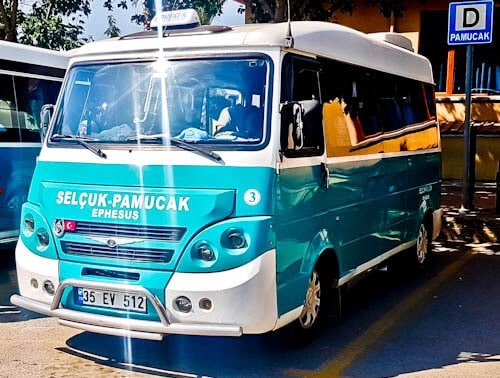 Independent travel between Ephesus and Selcuk is incredibly easy.  Minibuses leave regularly from Selcuk bus station to Ephesus car park.  When you arrive at Ephesus be sure to ask the driver what time the last bus is.  However, it’s not a problem if you miss the last bus as the alternative taxi option is inexpensive.  Most importantly, the longer you stay, the quieter Ephesus becomes.