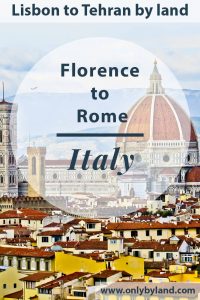 What to see and photograph in Florence

Florence is one of the most popular cities to visit in Italy.  The whole historic city is a UNESCO site.  Points of interest in Florence include;

Florence is a tourist hot spot.  This means there are plenty of hotels deals.  Choose a hotel in the UNESCO historic center of Florence and you’ll be staying in a UNESCO hotel! 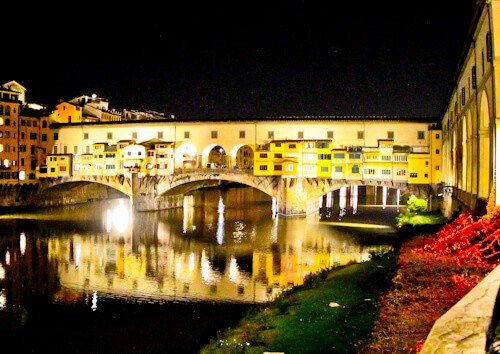 Ponte Vecchio is arguably the second most iconic landmark of Florence.  It’s a medieval bridge that crosses the river Arno.  Located on the bridge are several high end stores.  If you wish, you can buy an original Rolex watch on Ponte Vecchio.  It’s believed the bridge was built where a former Roman bridge once stood.  This is the narrowest point of the Arno river.  Sometimes the river Arno is calm.  On calm days you can take the perfect reflection photograph of Ponte Vecchio. 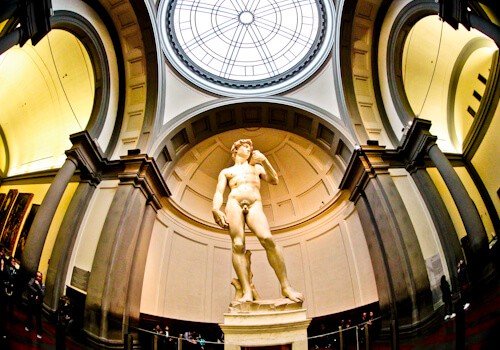 No trip to Florence is complete without seeing the masterpiece of Michelangelo, David.  The David statue is located in the Galleria dell’Accademia.  The statue of David was originally intended for the Florence Cathedral.  It was going to be positioned on the roof with other prophets.  Instead it was placed in the plaza outside Palazzo Vecchio.  The statue was located in the plaza from 1504 until 1873.  It has stood in its current position in the museum since 1873.  In addition to the David statue, you’ll also see partially finished works by Michelangelo.

Some people won’t want to pay the entrance fee to the museum.  If you’re one of those, you can visit the imitation David.  This is standing where the original once stood, outside Palazzo Vecchio. 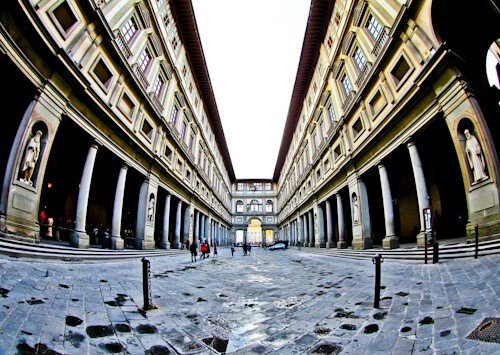 The Uffizi Gallery is the most visited art gallery in Italy.  If you plan to visit you should buy your tickets online, therefore avoiding long queues.  It holds some of the most valuable Italian Renaissance paintings in the world.  In the museum there is artwork by several famous Italian painters.  You’ll see pieces of art by Raphael, Michelangelo, Caravaggio, Titian, Artemisia Gentileschi, Giotto, Domenico Veneziano, Lippo Memmi and Simone Martini.  Furthermore, from the outside Uffizi Gallery is an Instagrammable building. 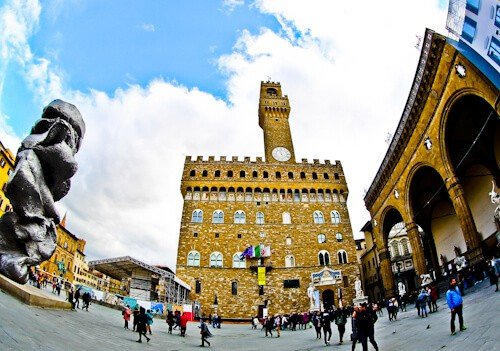 Palazzo Vecchio is known in English as ‘Old Palace’.  The architectural style of the building is Romanesque.  It’s the town hall of Florence.  In addition, it houses a museum.  The masterpiece to see in the museum is ‘Judith and Holofernes’ by Donatello.  Directly in front of the palace is an imitation of David by Michelangelo.  Next door to the palace is the Loggia dei Lanzi.  This arched building contains several historic statues.  The square, known as Piazza della Signoria is a popular meeting point for tours.  It was also the main town square of the Roman town of Florentia (modern day Florence). 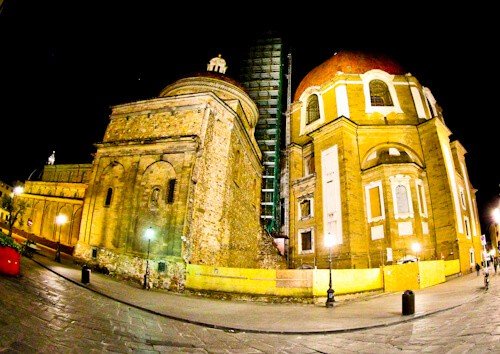 The Medici chapels both date back to the 16th century.  The Medici family controlled Florence throughout the Renaissance period.  Several of the Dukes of Medici are buried here.  Especially relevant of these chapels is that Michelangelo has works located inside.  He has 2 famous sculptures located in the New Sacristy section.  The sculpture of Dawn and Dusk, in addition to, Night and Day.  Another sculpture located in the chapel is the Medici Madonna, also by Michelangelo. 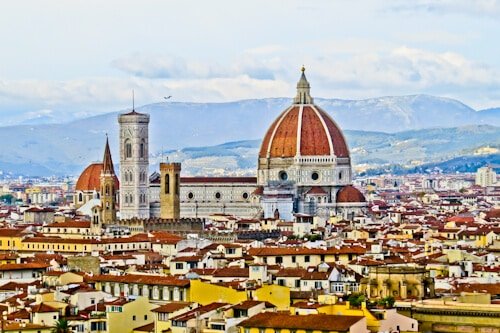 Across the Arno river from the historic center is Piazzale Michelangelo.  To reach it you must climb several stairs.  As a result you’ll get a good workout on your way up.  From the viewpoint you can admire the view of Florence.  You’ll be able to see many of the famous sites.  River Arno and its bridges are clearly visible.  You also get to see how big the cathedral is in comparison to the neighboring buildings.  While you’re on this side of the River Arno you should consider visiting the Pitti Palace. 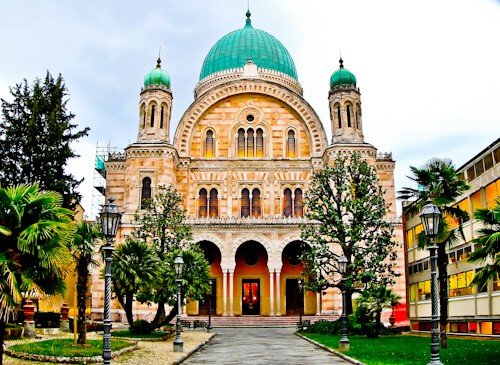 The synagogue was completed in 1882 after 8 years of construction.  It’s considered by many as one of the most beautiful synagogues in the world.  Most noteworthy is that it’s one of the largest in the region.  During World War II, the Germans used it as a warehouse.  Maybe the huge size of it helped it survive this war?  A smaller synagogue would have been no use and destroyed.  Today it houses a Jewish museum. 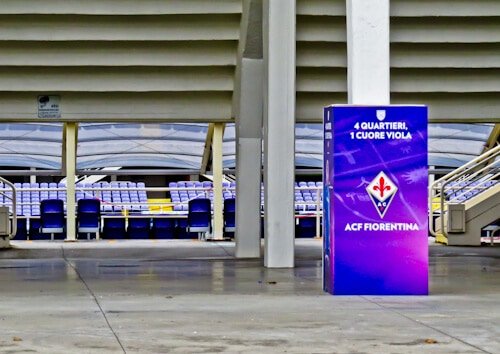 The football team of Florence is Fiorentina.  Fiorentina play in the Stadio Artemio Franchi.  The stadium is located a short walking distance from the UNESCO historic center.  The stadium was built in the 1930’s and renovated for the Italia 90 World Cup.  It has featured in 2 World Cups.  During Italia 90 it hosted the quarter final between Argentina and Yugoslavia.  Famous players to have played here are Diego Maradona, Gabriel Batistuta, Roberto Baggio, Stefan Effenberg and Adrian Mutu.  The only way to visit the stadium is when Fiorentina are playing at home.  No Fiorentina stadium tours are available. 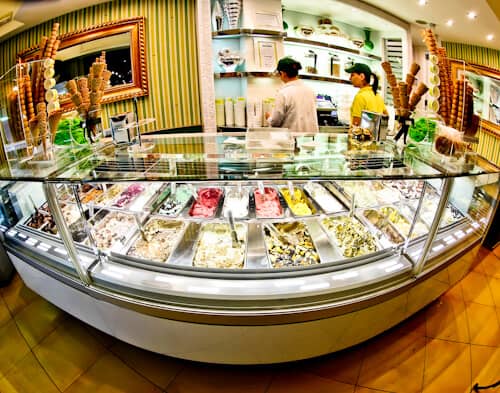 With so many ice cream shops in Florence, a recommendation is useful.  If you visit Gelateria Santa Trinita you’ll be satisfied with your Italian gelato.  It’s located a couple of blocks from Ponte Vecchio.  In conclusion, while you’re visiting Ponte Vecchio make sure you buy yourself an ice cream! 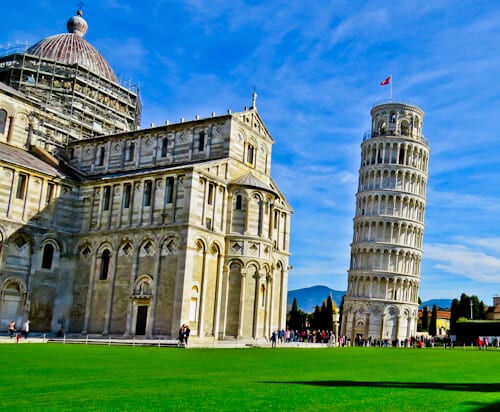 While you are in Florence you must consider a day trip to Pisa.  I took a day trip to Pisa and Cinque Terre.  The Leaning Tower of Pisa is a UNESCO world heritage site.  Furthermore, the villages of Cinque Terre are also UNESCO sites.  For those who want to make amazing Instagram photos, this day trip is a must.  It’s also possible to take Tuscany wine tours from Florence.

How to get from Florence to Rome by bus 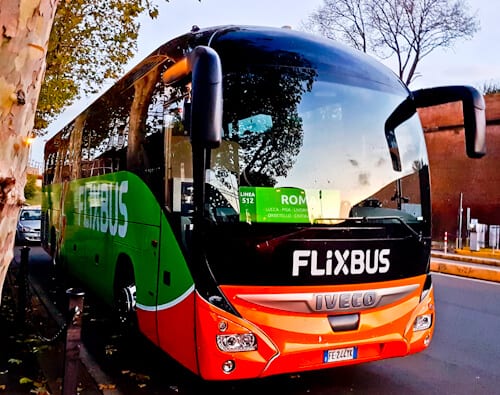 There are several buses each day from Florence to Rome.  The Flixbus stop is conveniently located outside the train station.  As always with Flixbus you’ll be traveling on a clean, spacious and modern bus.  In addition to your own charging outlet, free WiFi is available throughout the journey.  The direct trip to Rome takes less than 4 hours.