Things to do in Freetown, Sierra Leone

Freetown is the capital of Sierra Leone and it’s a hidden gem for every type of traveler.  Here are the top things to do in Freetown Sierra Leone. 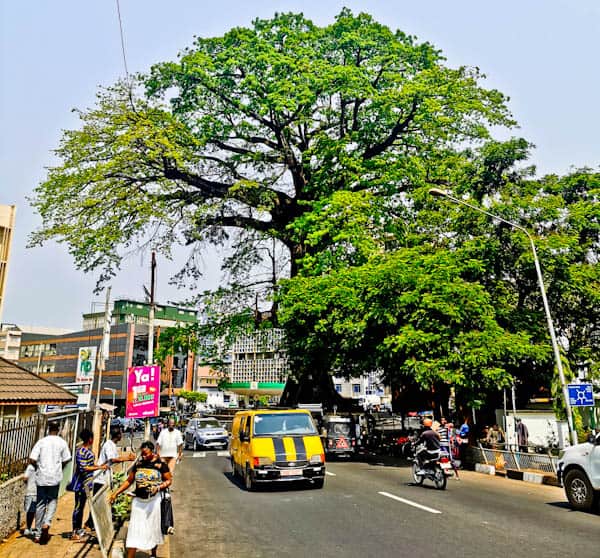 You visit the Cotton Tree for its historical significance.  When freed slaves returned to Africa they held a Thanksgiving ceremony at the base of this very tree and Freetown was born.  What’s more, it’s believed to be the oldest Cotton Tree in Sierra Leone and dates back to the 18th century.  Some who can trace their roots back to Freetown may hold a pilgrimage to the Cotton Tree.

Adjacent to the Cotton Tree is Sierra Leone National Museum.  It’s a small museum which will take you an hour at most to explore.  I highly recommend you visit as what you will learn in this hour will greatly enhance your understanding of Sierra Leone and your immediate surroundings.  What’s more, there is a very interesting African mask section. 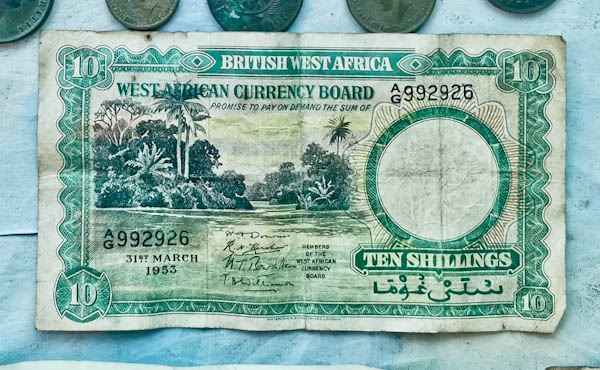 If you’re interested in old money then you’ll enjoy the cabinet which features British West African Shillings.  It’s hard to believe that as recently as the fifties, these bills were still being minted. 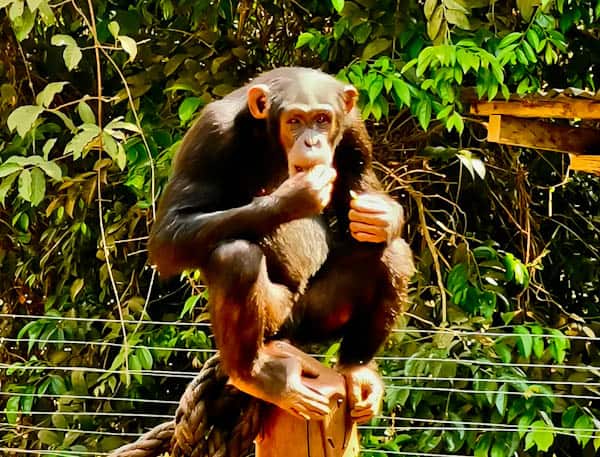 Many visitors to Freetown have one reason for coming, that is to visit the Chimpanzee Sanctuary.  Here, chimpanzees are rehabilitated before being returned to the wild.  It’s open every day for tours at both 10:30am as well as 4:00pm.  On the tour you’ll learn about the different rehabilitation stages.  Most importantly, you can support them with your entrance fee and any donation you give.  If you plan on photographing the chimpanzees you’ll need a camera with good zoom as you must keep your distance.  Read about my Chimpanzee Sanctuary visit. 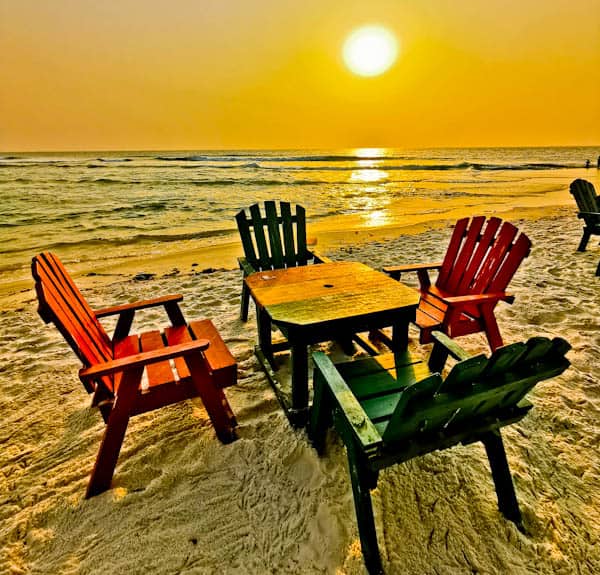 Did you know that Sierra Leone has some of the most beautiful beaches in the world?  Not only beautiful beaches but it’s also very common to find quiet and even empty beaches.  The beach at Number Two Village is pictured above.  This private beach has a one dollar entry fee. 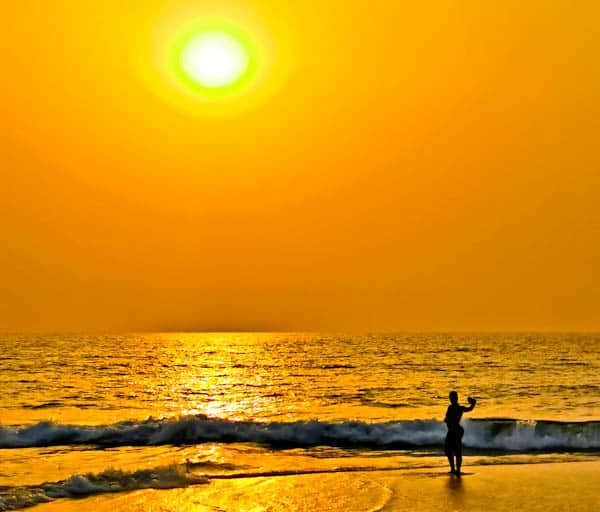 Sierra Leone features some of the best sunsets in the world.  Perfect for snapping a selfie. 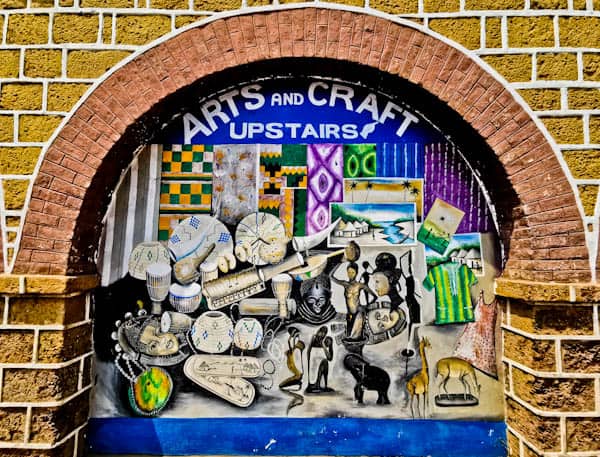 Upstairs in what is known as the Big Market features arts and crafts.  Remember to bargain, but also respect the artists here are making a living. 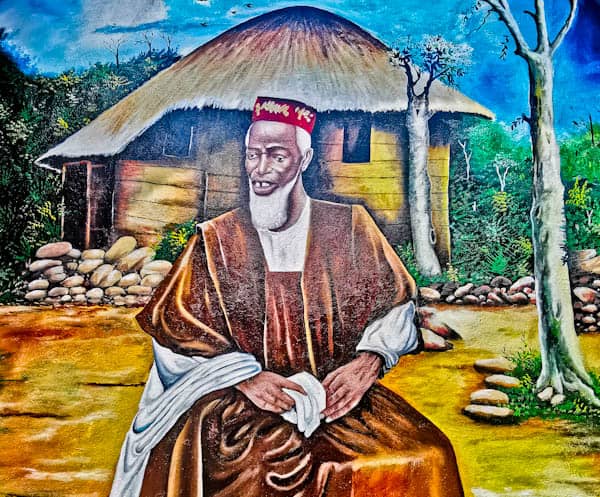 For me, the best street art in Freetown is the Bai Bureh mural outside the Big Market.  As a matter of fact, if you look at an original photo of Bai Bureh this is an incredibly accurate mural.  But who was Bai Bureh?  He stood up against the British during colonial rule and he’s most famous for the Hut Tax War.  He refused to pay tax to foreigners occupying a foreign land which makes perfect sense.  Throughout his time he and his army successfully fought against the British.  So much so that he gained their respect and when they eventually caught him, he was never killed.  In fact, after some time in prison, he eventually returned home a free man.  You can see a Bai Bureh statue in the National Museum, he’s on the 1000 Leone bank note and you can buy Bai Bureh inspired art in the market.

On the subject of street art, you can find it all over Freetown therefore keep your eyes open! 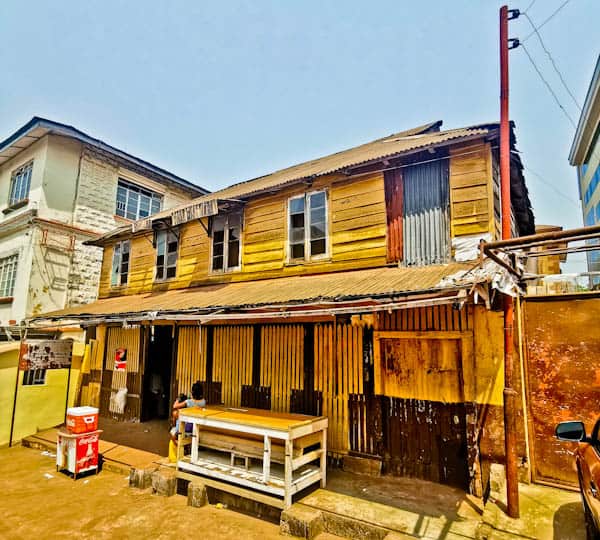 Being a former British colony, I expected to see British colonial architecture in Freetown Sierra Leone which I did.  However, this is not what attracted my attention.  When slavery was abolished the former slaves returned to Freetown and constructed their own buildings.  As you explore Freetown you’ll see hundreds of buildings made by former slaves and slave descendants.  Freed slaves came primarily from England, Jamaica and Nova Scotia, Canada.

When slaves were freed, they returned to Africa and founded Freetown.  I mentioned earlier about the Cotton Tree where they held a Thanksgiving Ceremony.  Two other significant places in Freetown are the King’s Gate as well as the Portuguese Stairs.  It’s believed the majority of returning former slaves climbed these stairs and walked through this gate.  For this reason, if you can trace your roots back to Freetown this will be a pilgrimage site. 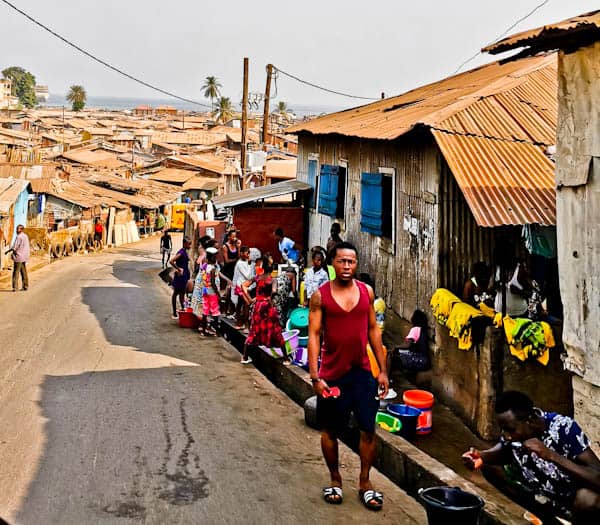 Unlike the favelas of Rio, Brazil, you can walk through the Freetown slums by yourself.  As a matter of fact you can safely explore the slums, whilst talking to the friendly locals and enjoying an ice cold Coca Cola.  However, I wouldn’t recommend visiting after dark.  It’s worth noting that during the wet season this area of Freetown floods.

It seems every major city in West Africa has a huge bat population.  These bats circle the city at dawn and dusk.  In neighboring Conakry, Guinea, the bats were the source of the Ebola outbreak which affected both Guinea and Sierra Leone.

Best Way to Get Around Freetown 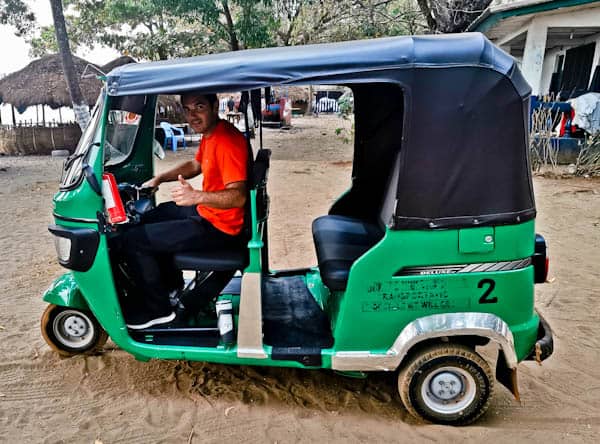 You can hire a keke and driver in Freetown for as little as $2 per hour.  Simply chat with a few drivers and choose who you like best.  I even had my keke driver take me out to the Chimpanzee Sanctuary and wait for me.  As a matter of fact, send me a message if you want his details.

How to Get a Liberia Visa in Freetown 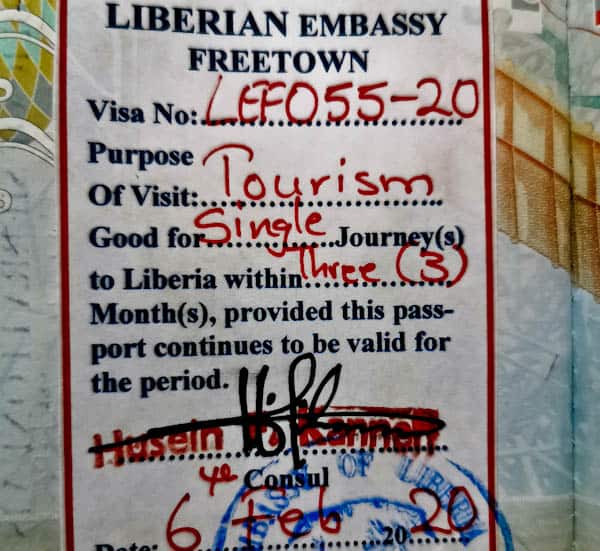 When I read about how to get a Liberia visa in Freetown I expected it to be a difficult and long process.  However, it turned out to be quite a simple process which took a total of 24 hours from application to receipt.  Firstly, visit the Liberian Embassy in the morning to make your application.  You need cash and a couple of passport photos.  The visa costs are in US Dollars and vary depending on your nationality.  I have a UK passport and the cost was $120, I remember for Europeans it was $100.  You can pay in Dollars or Leones and there’s an ATM nearby which accepts foreign cards.  I asked the friendly guy in the embassy who looked like Laurence Fishburne if I could have the visa for the next day and he said yes.  Finally, be friendly and respectful as it’s completely up to him how long it takes.

Getting Money from the ATM in Freetown 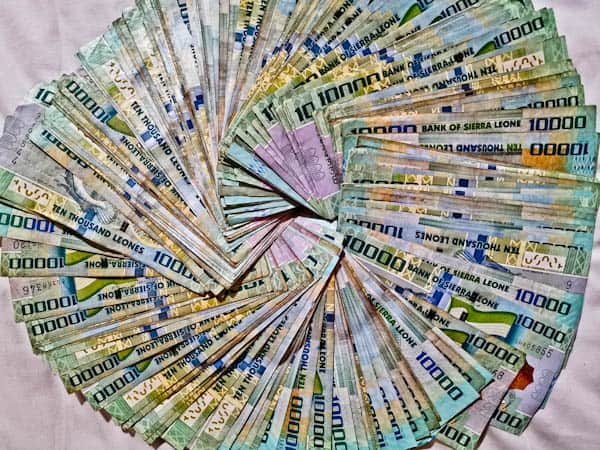 So the Liberian visa will cost you around $100, plus you have your food, hotel and activity costs.  Freetown is relatively inexpensive but there is a slight difficulty in acquiring cash.  The biggest bill is 10,000 Leones which is around $1.  What’s more, the maximum you can take from the ATM is 400,000 which is around $40 each time.  Each visit to the ATM has a charge of a few dollars so getting your cash can be more expensive than usual.  For this reason, consider bringing cash in Euros or Dollars.  Who wants to be a millionaire?

How to get from Freetown to Monrovia via Bo 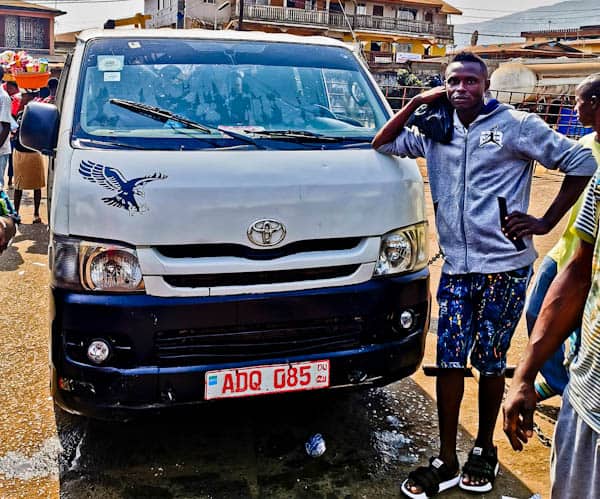 Shared minivans leave for Bo when full from Freetown Central Lorry Park.  Journey time is around 4 hours and the roads are in excellent condition.  I stayed overnight in Bo before continuing my journey to Monrovia.

Read about my full journey from Freetown to Monrovia by land. 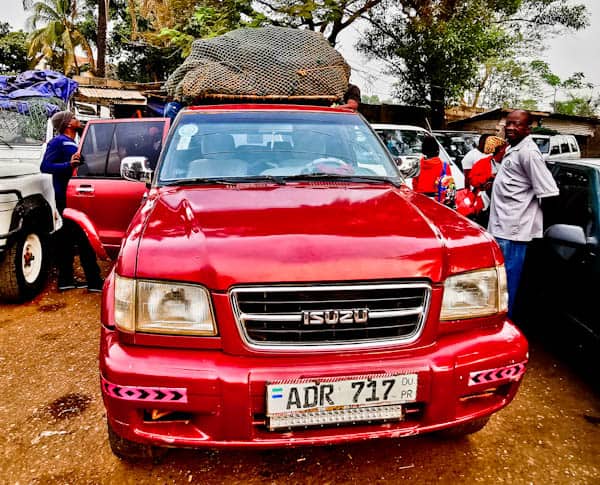 Shared minivans leave Bo from the Shared Taxi Park directly to the Liberia border.  I was the first to arrive and it took around 30 minutes to fill up.  What’s more, I recommend you buy the front 2 seats as the road to the border is a little bumpy.  I recommend you chat with other people heading towards Monrovia so you can simply follow them through the border and onto the next share taxi.  Additionally, you should take a motorbike over the Sierra Leone / Liberia border.  They wait for you as you exit Sierra Leone, enter Liberia and also take you to the next share taxi to Monrovia.  This is how the locals cross the border and bikers will race to meet you out of your taxi.

Enjoy your Travel from Freetown to Monrovia

Most importantly, as always in West Africa, be patient throughout this journey as anything can happen.  People have no concept of time in this part of the world so you journey could take longer than you’d think possible.  Consider breaking the Freetown to Monrovia by land journey up in Bo.

Things to do in Monrovia Liberia.