Kourou is one of the largest cities in French Guiana.  It’s the closest city to the famous Iles du Salut (Salvation Islands).  Things to do in Kourou include;

As French Guiana is part of France, hotels are on the expensive side, it’s worth checking Airbnb.  Additionally, it’s possible to visit Kourou and the Iles du Salut on a day trip from Cayenne. 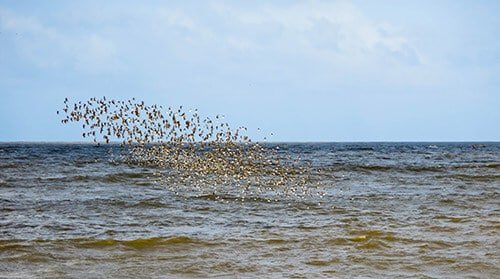 One of the main reasons that Kourou exists is because it was built around the Kourou river.  If you were to follow the river inland it would lead you to a tropical rainforest, for this reason you’ll see lots of birds, wildlife as well as bugs around the river.  Additionally, the Kourou river leads to the Atlantic Ocean.

The home page of the space center gives detailed information about organizing a day trip there and if you’re lucky, to watch a live launch.  France is one of the most advanced nations when it comes to space exploration and the location of French Guiana on the equator is perfect.  If you visit mainland France it’s worth visiting the historic Nice Observatory with its Gustave Eiffel designed cupola. 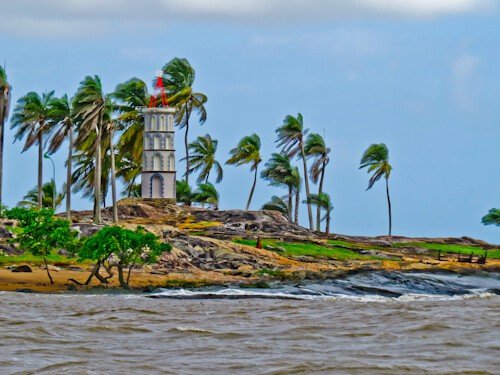 The Dreyfus Tower is a picturesque and not to mention, windy location in Kourou.  This is not a lighthouse, as you may presume.  In fact Dreyfus Tower was originally built as a means of communication with the prison located on the Iles du Salut.  There used to be a large complex of buildings surrounding the tower but these were destroyed in favor of a hotel.  This complex of buildings were there to support the prison on the islands which closed at the start of the 20th century.

How to get from Kourou to the Iles du Salut

The Salvation Islands (Les Iles Du Salut) are one of the most beautiful places I have ever visited.  The Islands that make up these islands as well as wildlife include;

The best way to see the wildlife is by sitting quietly alone somewhere and the jungle will come alive around you!

Catamarans between Kourou and the Iles Du Salut (Salvation Islands) 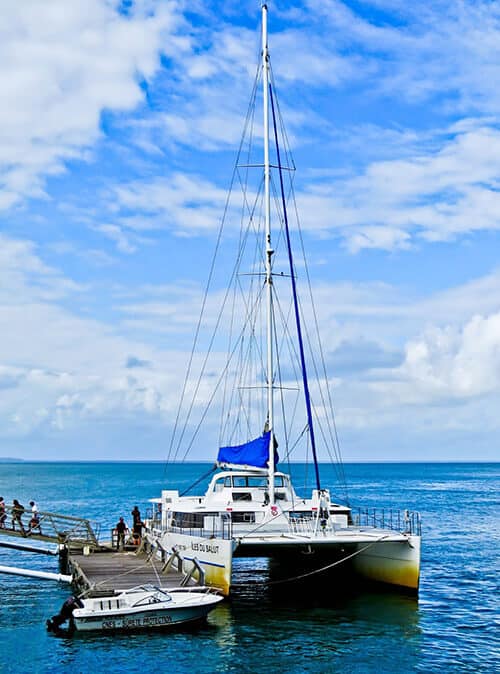 There are limited catamarans between Kourou and the Iles Du Salut (Salvation Islands).  The cost is about €30 return and the islands are 10 km north of the mainland.  It’s a good idea to have your hotel check the current timetable, so you don’t have a long waiting time.  More importantly it’s worth noting the last departure time back to Kourou so you don’t get stranded overnight! 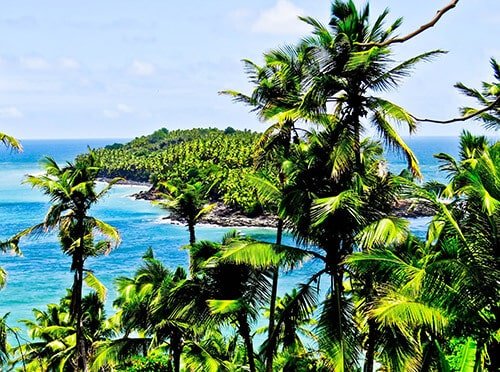 When you visit the islands, you’re actually visiting Royal Island.  From Royal Island you have views of St Joseph Island as well as Devil’s Island.  Royal Island is the island which was home to the infamous prison.  I organised my Catamaran journeys so I had 4-5 hours to explore Royal Island.  If you require more time on the Island, it’s possible to stay overnight, either camping or in the hotel.  In addition there’s the only restaurant on the island in this hotel, so it’s likely you’ll visit there. 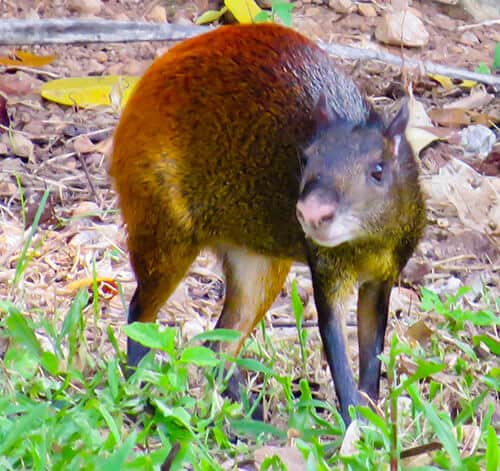 Agouti are a large rodent and you’ll definitely see these.  They are more scared of you than you are of them, but I’m sure some will be alarmed when you see a huge rat walking nearby! 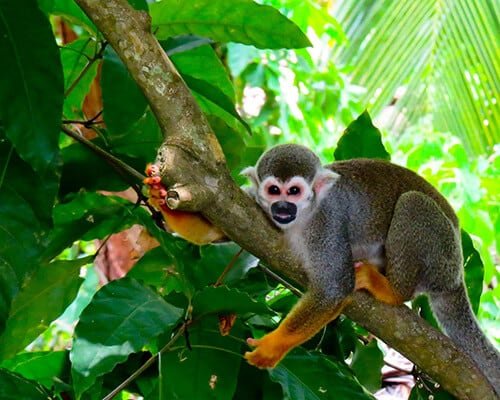 A Squirrel Monkey is one of the more exotic animals you’ll see on the islands.  These are not so easy to see and you’ll need to quietly wait to see them, also a little luck is required.  In addition, monkeys are quite naughty so don’t go too close as they may steal your loose personal belongings. 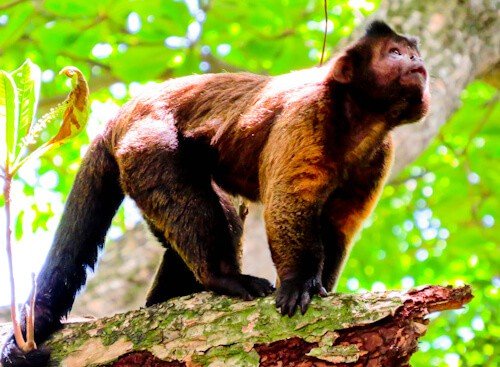 The Tufted Capuchin monkeys are much more common than the squirrel monkeys.  It’s likely you’ll see these before any squirrel monkey.  Along with the squirrel monkeys, they are mischievous, which means you must watch your personal belongings when they are closeby.  Snacks, as well as sunglasses and phones are the most likely things they will try to take from you. 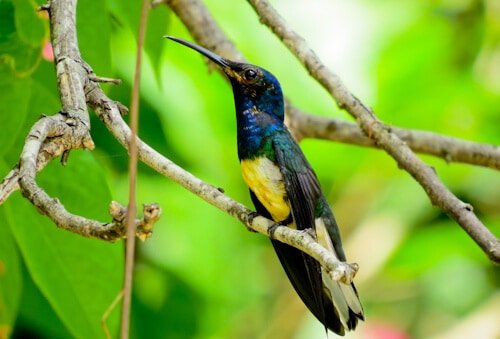 There are several different species of birds on the islands.  One bird you’re highly likely to see is the hummingbird.  More importantly these birds are in the wild and are not encouraged with food.  You will see them in their natural environment, humming around the natural food which attracts them. 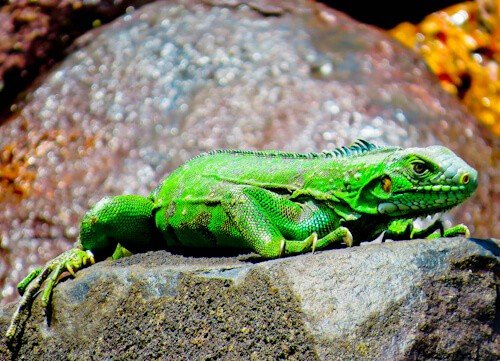 There are lots Iguanas on the islands.  The best place to spot them is on the rocks close to the sea.  Iguanas are one the easiest things to see on the Islands, also they come in several different colors. 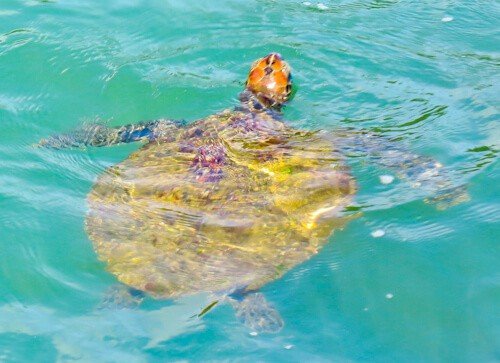 It’s worth peering into the surrounding ocean as you may see a sea turtle.  In fact, there are hundreds of sea turtles so it’s highly likely you’ll see one.  At the pier where you arrive is a good place to spot them, especially when the catamaran engine has been turned off. 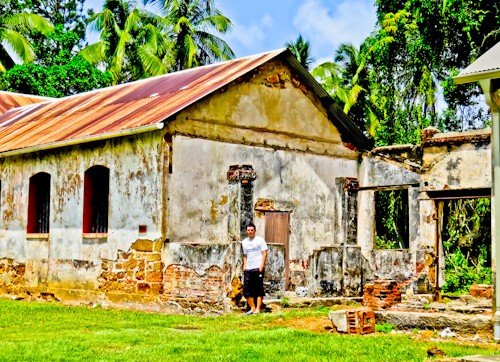 The main reason people visit the islands is to see the historic prisons.  This is South America’s answer to Alcatraz, San Francisco.  In addition to the prisons on the island, you can visit the lighthouse, chapel as well as the hospital.  This is the reason I visited but I was distracted by the abundance of wildlife in addition to the beautiful views of other islands.

French Guiana – How to get from Kourou to Paramaribo – St Laurent

My Kourou Hotel organised a share taxi to pick me up early morning and take me to the border with Suriname.  The most memorable part of this share taxi ride was that some sort of Celine Dion greatest hits album was played the whole time on full blast.  I guess because she is French Canadian that it is the French connection.  The taxi was scheduled to arrive at the border with Suriname in time to get the boat over the Maroni river to Suriname.  From the Suriname side of the Maroni river it should be easy to find another taxi to the capital, Paramaribo.  It’s worth noting that the share taxi from Kourou to St Laurent costs €25 one way.

Kourou to St Laurent to Albina to Paramaribo

Entering Suriname was easy, there wasn’t a queue for immigration and I’d already bought my visa in Cayenne so my passport was stamped without a problem.  They only gave me 5 days which is exactly what I asked for so be careful how many days you request on the immigration form.  Taxis to Paramaribo were waiting close to immigration and left when full which was virtually straight away as the boat had just arrived from French Guiana.  Importantly, the share taxi from Albina to Paramaribo costs €20.