Gaziantep is a lesser visited part of Turkey close to the border with Syria.  Due to the lack of tourists it’s incredibly cheap to visit.  That doesn’t mean it’s short on attractions though.  Here are a few things to do in Gaziantep Turkey:

Firstly, hotels in Gaziantep are excellent value meaning you can enjoy a better class of hotel then you normally do.  That’s before you explore the countless food options and attractions.  Read on. 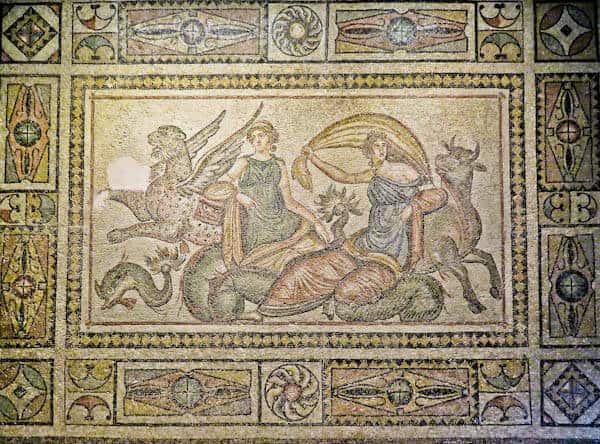 The Zeugma Mosaic Museum warrants a visit to Gaziantep by itself but what is it?  It’s the largest mosaic museum in the world and features mosaics from the ancient Roman city of Zeugma.  I’ve visited the famous Roman city of Pompeii and believe me, the mosaics here are in much better condition and there are plenty of them to observe.  Plan on a few hours here. 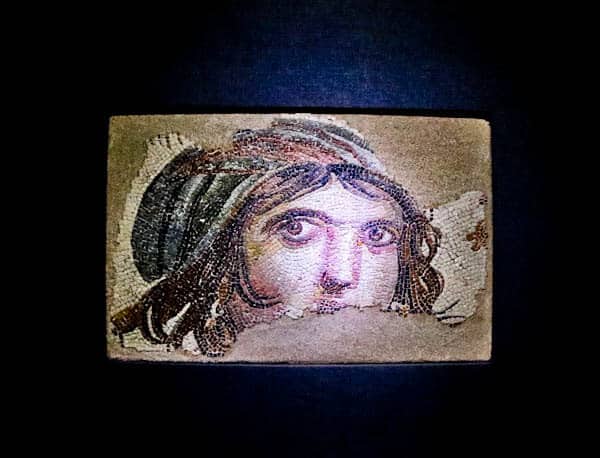 The iconic mosaic at the Zeugma Mosaic Museum is the Gypsy Girl.  It’s one of those images which features a powerful gaze.  Other popular works at Zeugma include a Mars Statue as well as several mosaics portraying Greek Gods.  Take you time to appreciate this well preserved artwork. 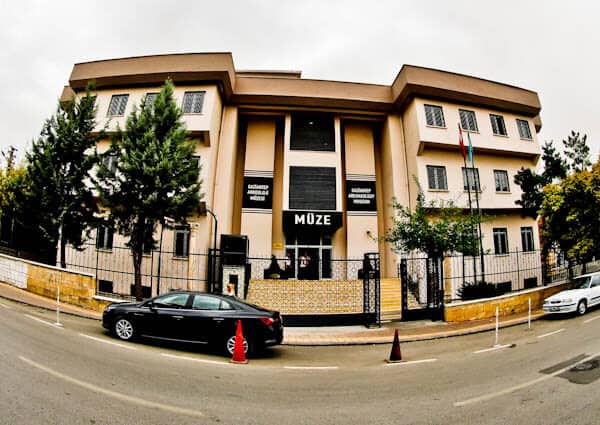 If you’ve not received your historic Roman artwork fix from the Zeugma Mosaic Museum, then you should consider the Museum of Archaeology.  Grave stones with huge inscribed heads can be found inside.  In addition, there are also artifacts from Pre-Roman times. 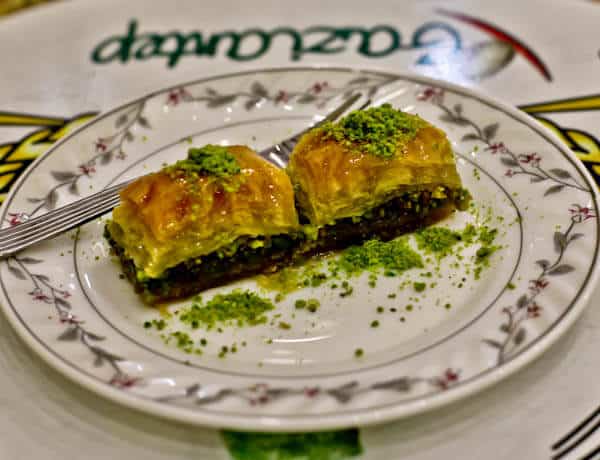 If you mention Gaziantep to any Turk they won’t mention the mosaics which many foreigners visit the town for.  What they will get excited about is the baklava.  Gaziantep has a reputation for the best baklava in Turkey.  For this reason you must try the local baklava in Gaziantep if not anywhere else.  What is baklava?  Baklava is a Turkish dessert made from phyllo dough, chopped nuts and sweet syrup. 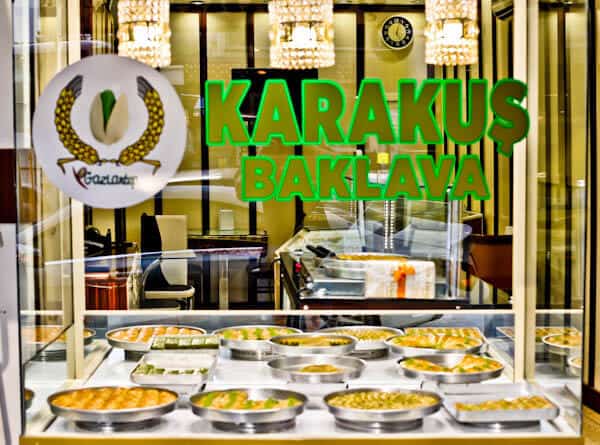 Where to eat Baklava in Gaziantep?  I recommend Karakus Baklava takeaway and restaurant to try baklava, here is the exact location.  Karakus Baklava specializes in baklava and is a restaurant for locals.  As a matter of fact, they took my picture when I visited!  Eat your baklava in, order it to take away – or both.  Bon appetit. 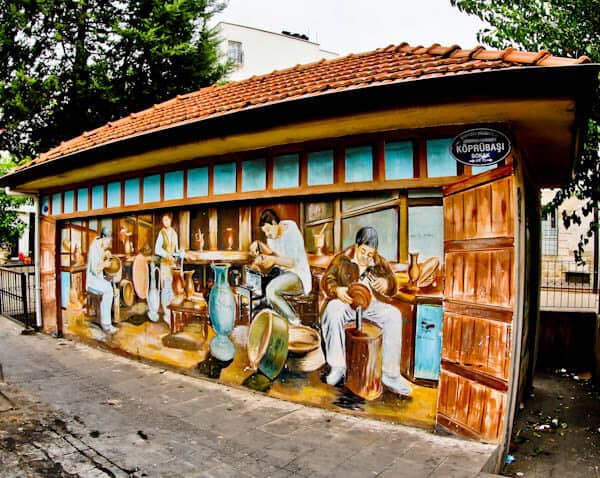 A lot of Gaziantep’s street art is inspired by the mosaics.  This is no surprise as which artist would not be inspired by such iconic artwork.  However, roam the streets and you’ll find some incredible artwork which shows the more recent culture of the area. 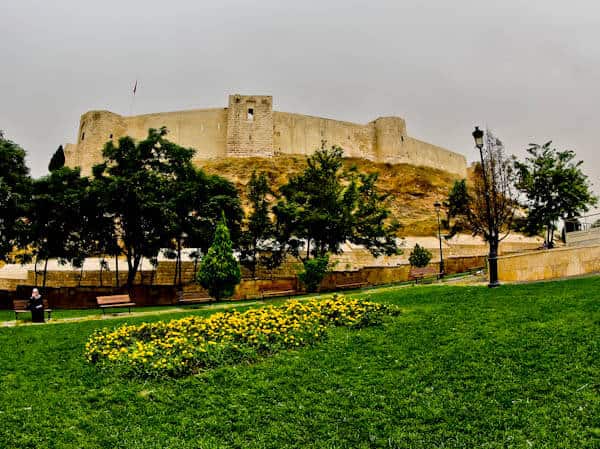 The history of Gaziantep Castle dates back to the Hittite Empire over 1500 years before Christ and the Roman Empire.  During the Roman period it became the huge castle you see today.  As a matter of fact, it’s circumference is over 1 km.  Due to it’s position on top of a small hill, you can see it from all around Gaziantep.  Finally, due to recent renovation, the castle appears to be brand new.

Panoramic View from the Castle 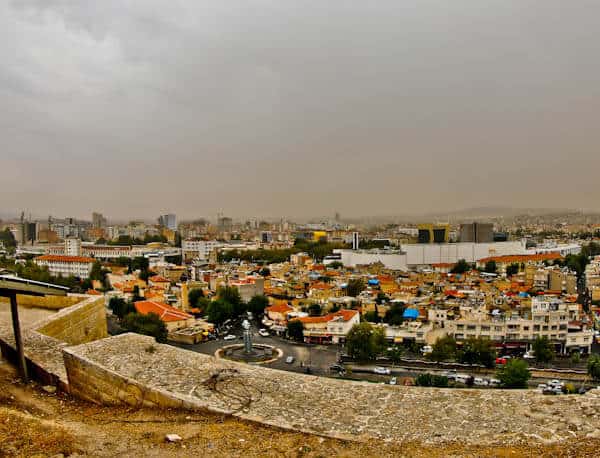 If you need another reason to visit the castle, how about the panoramic Gaziantep views?  Gaziantep Castle offers 360 degree views of the city and gives you an idea of the enormity of it. 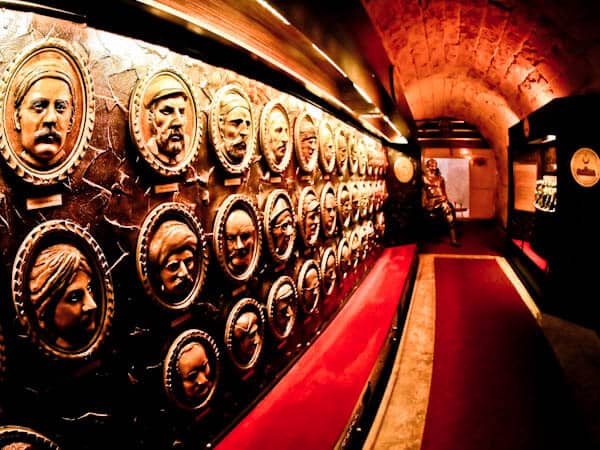 Did you know that a museum is located within the castles walls?  Even more reason to visit this iconic building!  The museum follows Gaziantep’s struggle during the Turkish war of independence.  Furthermore, you can learn about the Siege of Antep which occurred from 1920-21.  It’s an infamous battle against the French and it’s interesting to read facts from a non-European point of view. 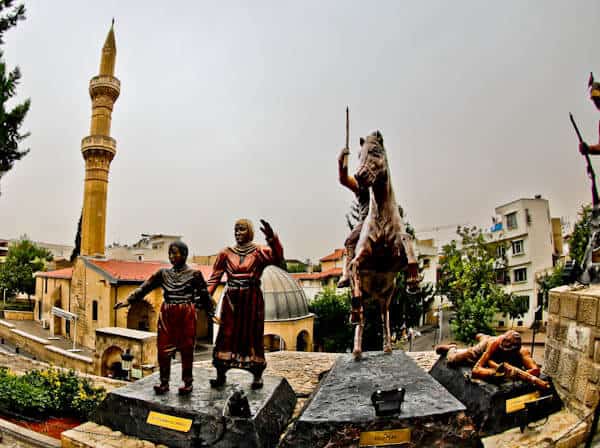 I was walking past the Sirvani Mosque as a made my way up to Gaziantep Castle.  There was a man outside who encouraged me, as a tourist, into the mosque.  Everyone is welcome in any mosque throughout Turkey and the world.  The Sirvani Mosque is in fact one of the oldest in Gaziantep and dates back to the 14th century.  Go inside and admire the unique architecture. 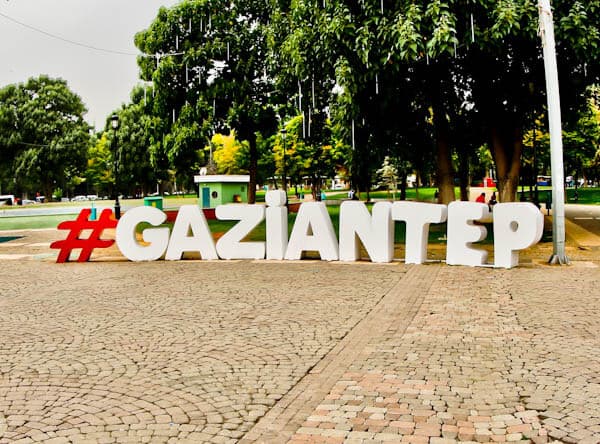 No trip to Gaziantep is complete without your photo adjacent to the Gaziantep sign.  It also gives you a clue which hashtag to use when you share it on your social media feed.  Where is the Gaziantep sign?  Here is the exact location, take time to walk through the park too. 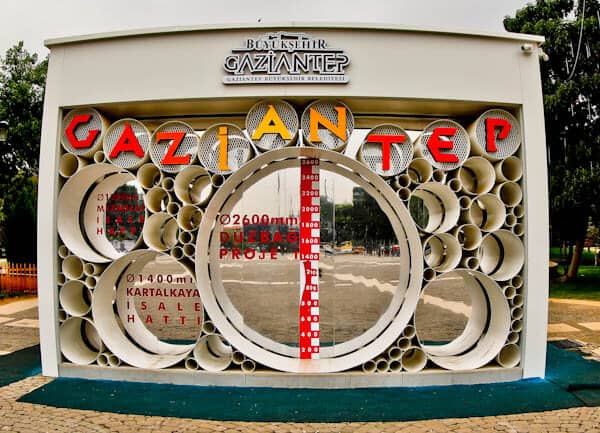 Adjacent to the Gaziantep hashtag sign is a more creative version.  Again, perfect to take a photo with and show your friends back home where you are.

Drink Turkish Tea in a Courtyard 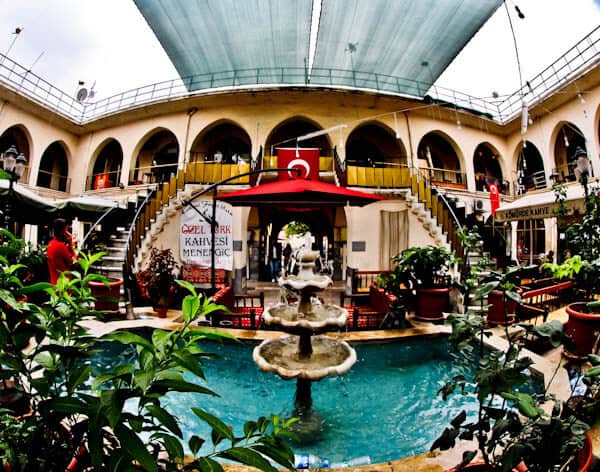 As you explore Gaziantep Turkey, take the time to enter the open courtyards.  I can’t think of a more ideal location to enjoy a typical Turkish tea or coffee. 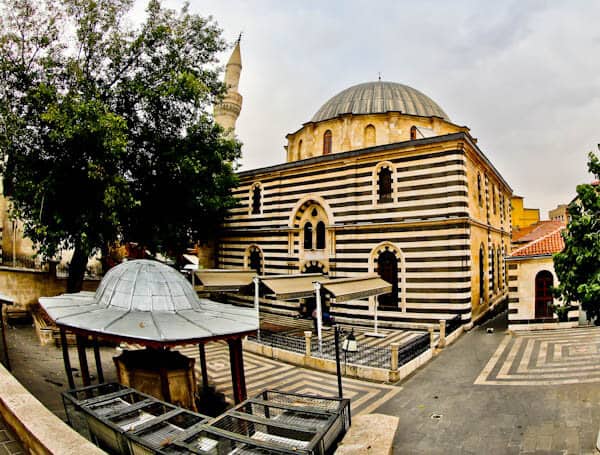 The Alauddevle Mosque was built at the end of the 15th century.  However, only the minaret remains of the original structure.  The one you see today was rebuilt during the 20th century.  None the less, it’s a beautiful structure to visit and take a look around.  Have you seen a mosque with artistic black and white lines on its facade before? 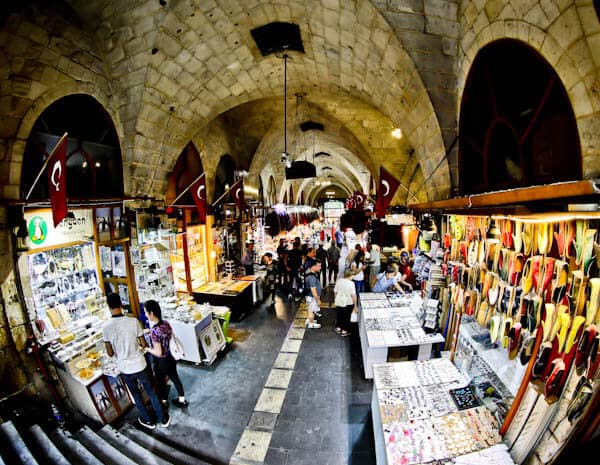 This indoor market sell hookahs, shoes and jewelry.  It’s like visiting the Grand Bazaar in Istanbul but without the tourists or hard sellers. 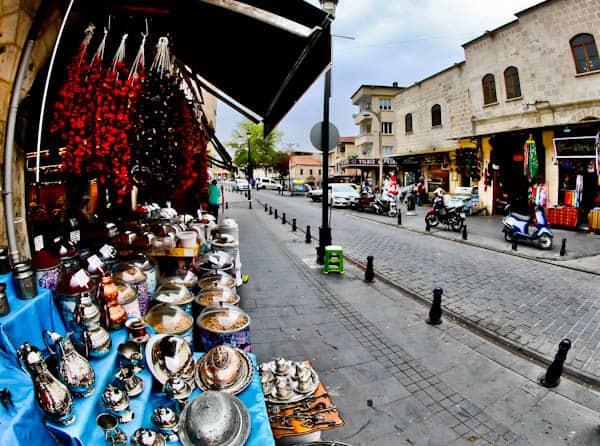 It’s highly unlikely that you want to buy copper products as souvenirs from Gaziantep Turkey.  A reason to visit the Coppersmith bazaar is because it’s incredibly photogenic. 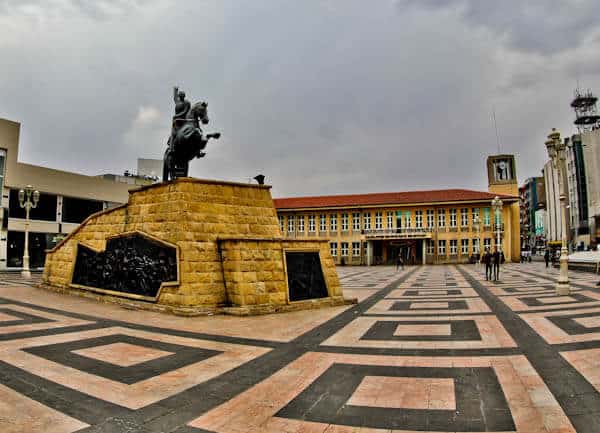 The large central square of Gaziantep features a statue of Kemal Ataturk on a horse.  Who is Kemal Ataturk?  He’s the founder and first president of the Republic of Turkey. 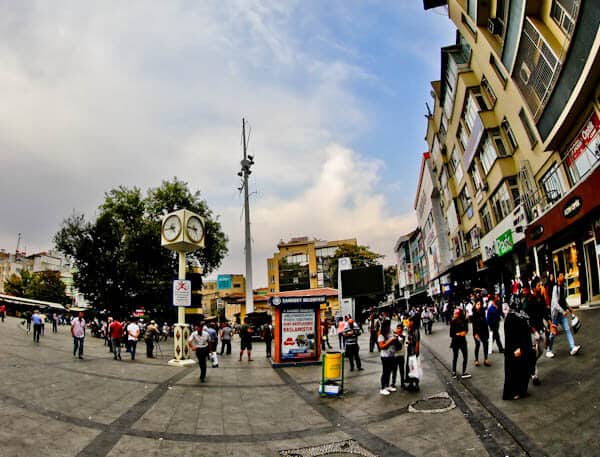 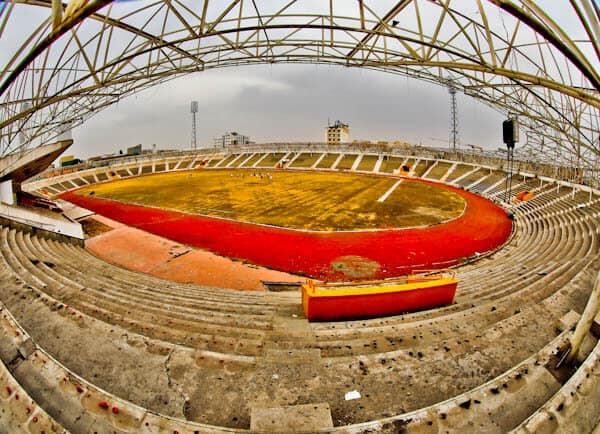 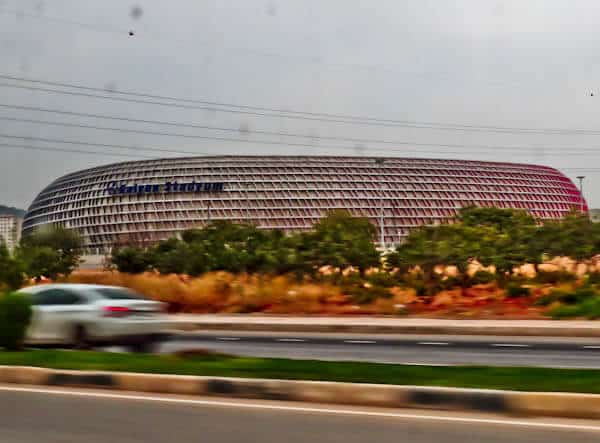 The new Gaziantep football stadium is located on the outskirts of the city.  For this reason, you must take a bus or a taxi to it.  They should have left it in the middle of the city!

How to Travel from Gaziantep to Sanliurfa by Bus 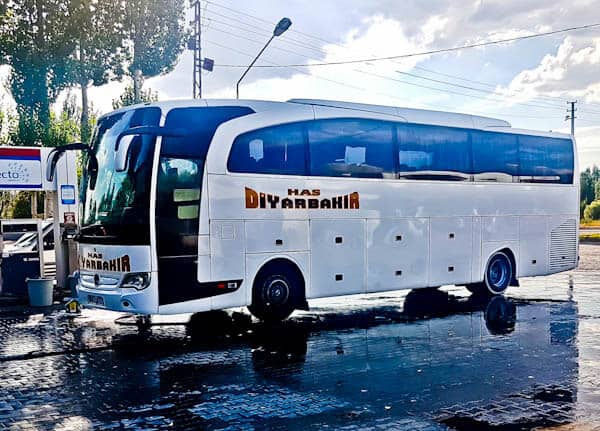