Goodison Park is one of the oldest stadiums in Britain.  It’s also home to Everton FC in Liverpool.  Reasons to take a Goodison Park stadium tour include;

Goodison Park is in the northern suburbs and easy to reach from any Liverpool city center hotel.  A hotel I particularly recommend is Staybridge Suites Liverpool which is adjacent to Albert Dock.  As for the stadium tour, I highly recommend you book online in advance. 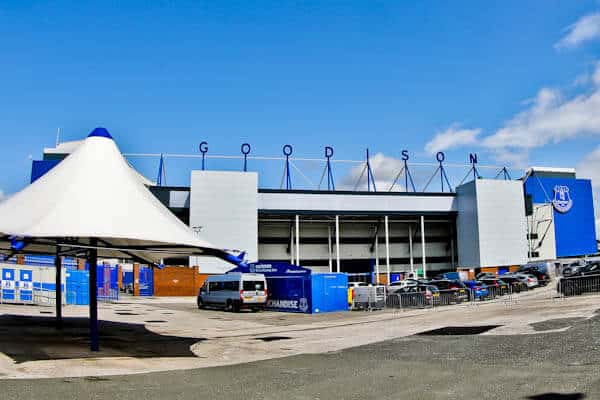 Goodison Park is either a short bus ride or a 45 minute walk away from Liverpool city center.  Take bus 19 from Queens Square opposite Lime Street station.  This will stop outside Goodison Park and is £4.20 for a day ticket. 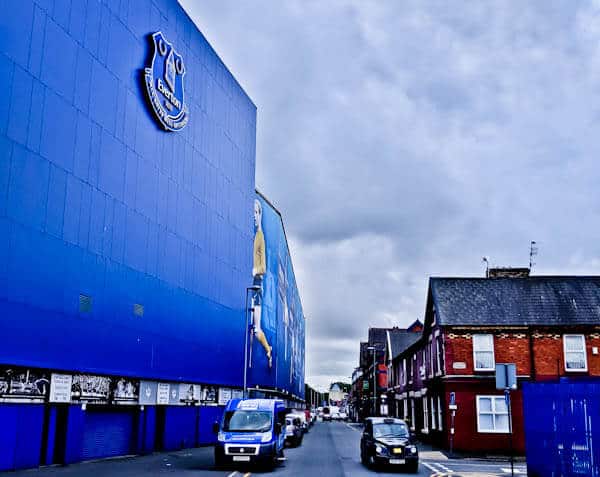 Goodison Park is a huge stadium with many entrances and exits.  For this reason, it helps to know where the stadium tour begins.  Enter Goodison Park from Goodison Road near the church.  Here is the exact location.  Once inside, the receptionist will take your name and show you to the waiting lounge.  Lastly, those interested in Everton history can follow the club timeline along the outside of the stadium. 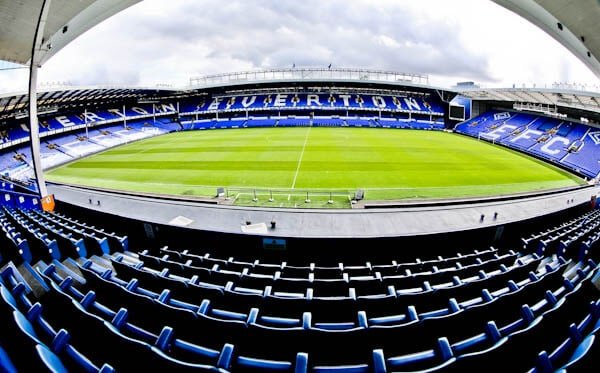 Goodison Park capacity is 39,572.  As a result it’s the 19th largest stadium in the UK.  Out of interest, Hillsborough is the 18th largest and Elland Road the 20th.  It recently featured in the Creed movie which follows on from the famous Rocky movies.  Additionally, it was also a World Cup 66 venue.  It was built in 1892.  For this reason, it’s not only one of the oldest stadiums in England but in the world.  Lastly, King George V, Queen Mary, King George VI and Queen Elizabeth have all visited the stadium at some point during the 20th century. 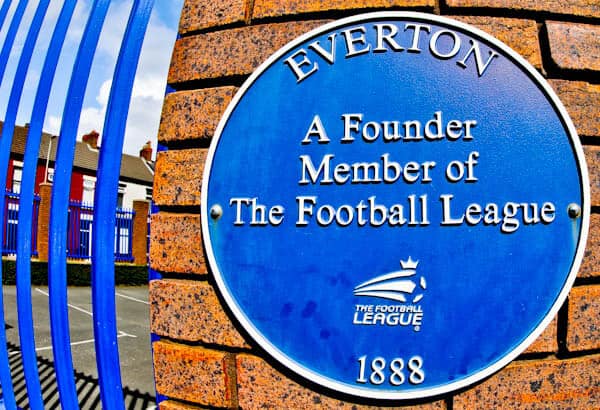 Goodison Park stadium itself is effectively a piece of history from the late 19th century.  Here are a few stadium facts; 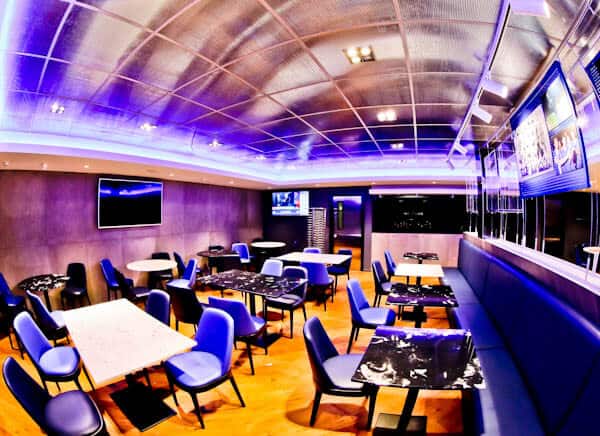 The first stop on the stadium tour is the 85 Lounge.  You may wonder why is there a lounge called 85?  Because 1985 is the most successful year in Everton’s history.  Everton won the equivalent of the modern day Premier League and Europa League this year.  Unfortunately, English clubs were then banned from playing in Europe the following season which hampered their progress.  If not, arguably they could have been as successful as their neighbors over at Anfield.  As you explore the 85 Lounge, club historians will explain the Everton history. 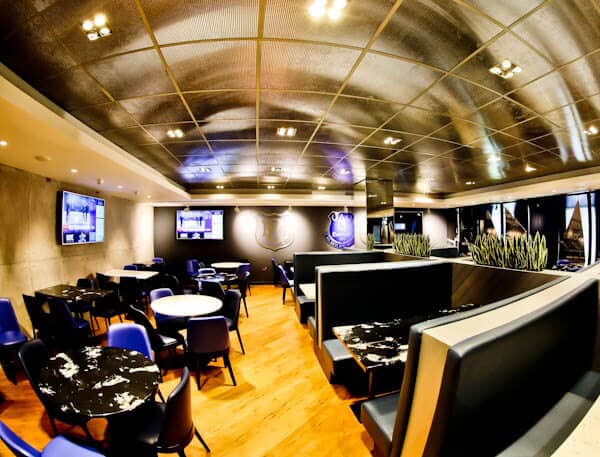 The second lounge you will visit on the stadium tour is the 1878 Brasserie.  1878 is of course the year Everton FC was founded.  In 1888, Everton went on to become one of the founding members of the football league.  Moreover, they won the third ever league in English football.  Preston North End won the first two. 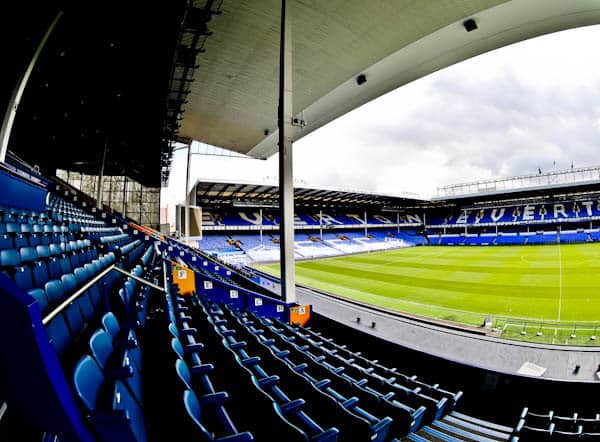 With almost 150 years of history, the VIP section has seen some very famous faces.  Firstly, Sylvester Stallone and Michael B Jordan visited during the filming of Creed.  Of course, the most famous visitors were King George V and King George VI.  As part of the tour you can enjoy the view of Goodison Park from the best seats in the house! 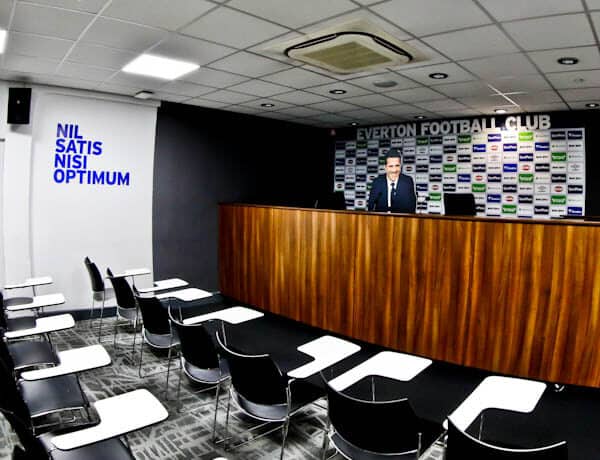 As part of the Goodison Park tour you’re invited to the press room.  Here you can sit where the manager sits and take your picture. 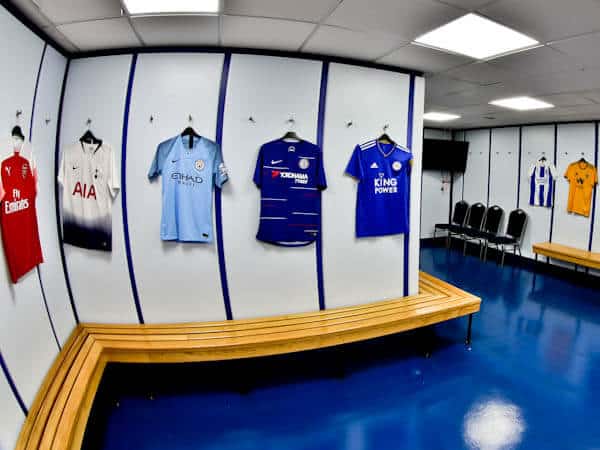 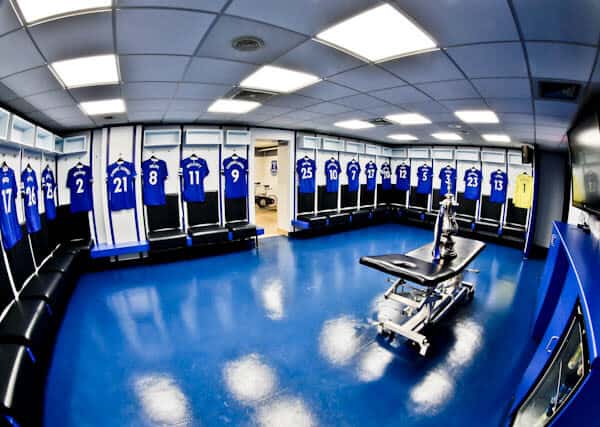 The Everton dressing rooms are luxurious in comparison to the away team dressing rooms.  Furthermore, they have access to more warm up and massage facilities.  A nice touch to the stadium tour is they have added a replica FA Cup to the changing rooms.  As a result you can take memorable photos here posing with the FA Cup.  Even more so if you bought yourself an Everton shirt from the Everton One Club Shop beforehand.  Finally, Everton last won the FA Cup in 1995. 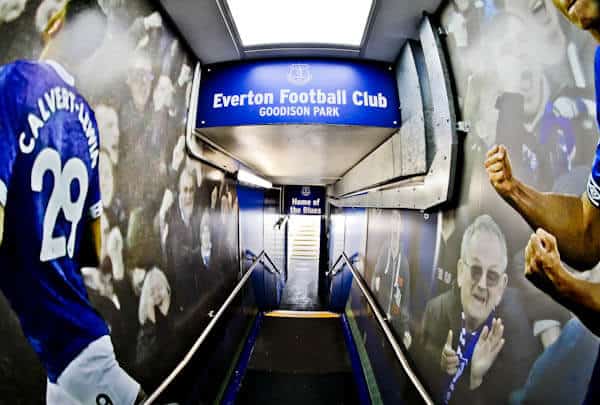 Perhaps the best part of the Goodison Park tour for Everton fans is the walk through the players tunnel.  A wonderful touch added is they play the Everton Z Cars theme song as you walk through.  Enjoy! 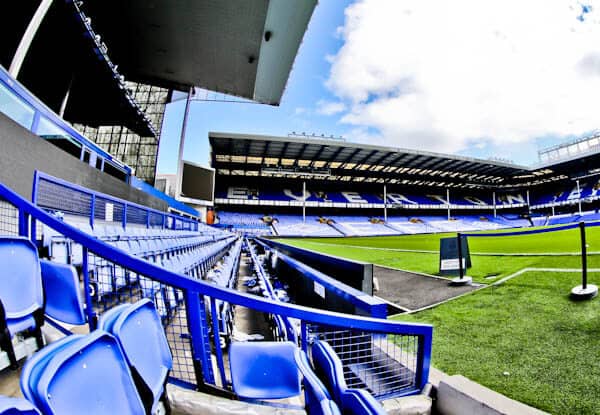 With almost 150 years of history, the Everton FC dugouts have seen a lot of famous faces.  Visitors to Goodison Park include, Pele, Eusebio, Cristiano Ronaldo, David Beckham and Lothar Matthaus.  Of course, there are also several famous managers who have used the dugouts including Howard Kendall, Sir Bobby Robson, Sir Alex Ferguson, Jose Mourinho, Arsene Wenger and Pep Guardiola.  Finally, you’re welcome to sit in both the home and away dugouts. 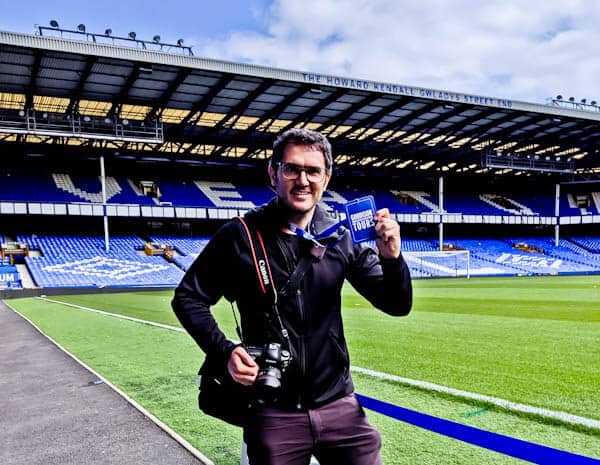 A photo pitch side with the iconic blue colors of Goodison Park is a must!  Additionally, from here you get a true feeling of the historic stadium.  It’s amazing to think so much has happened here over the years and it’s still in use today.  This is where the tour ends but be sure to visit the legend statues outside the stadium as well as Everton One Club Shop. 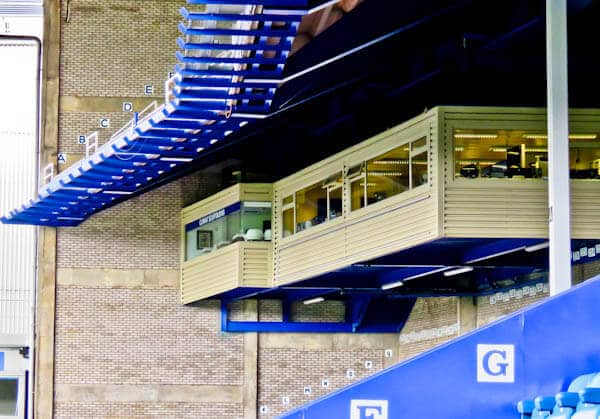 Goodison Park is one of the safest stadiums in England.  On match days police not only monitor the stadium but also fans arriving at Lime Street station.  When the Hajduk Split hooligans visited recently, the local police were on full alert. 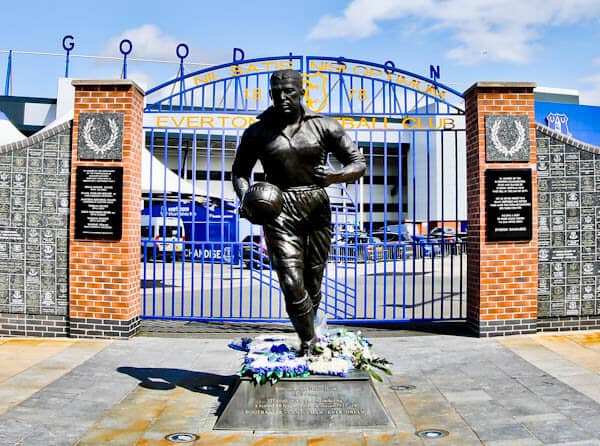 Dixie Dean is an Everton legend who scored 60 league goals in a single season.  Imagine if an English player could score 60 goals in a single Premier League season today?  They would be in the same league as Messi and Ronaldo!  View his statue in front of the iconic blue Everton FC gates. 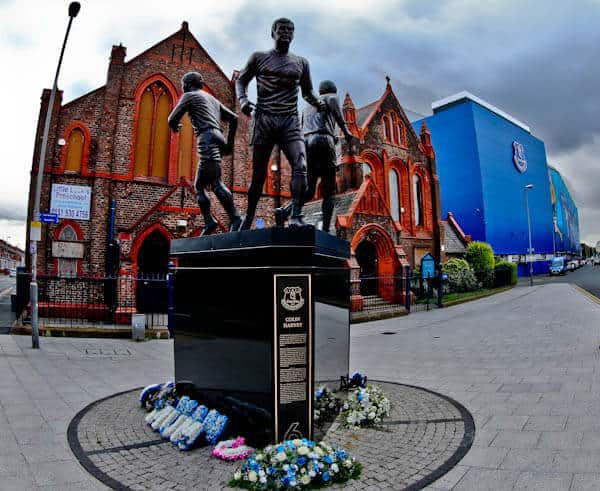 The Holy Trinity statue features Howard Kendall, Alan Ball and Colin Harvey.  It was sculpted by Tom Murphy, who also worked on the Dixie Dean statue.  Read the plaques under each statue to learn about their history with Everton.  Adjacent to the statues is St Luke’s church.  Goodison Park is the only stadium to have a church as part of it. 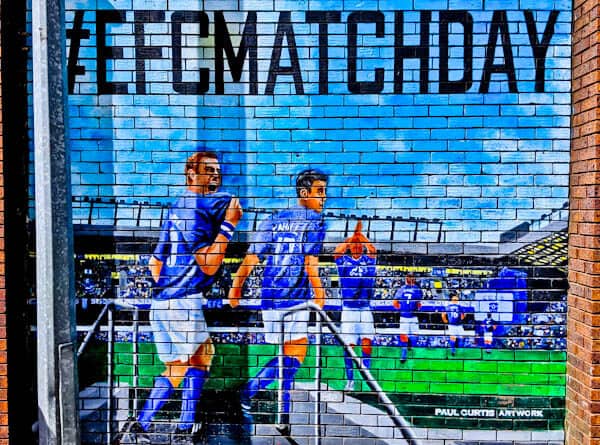 Liverpool is a city full of excellent street art and Goodison Park is no exception.  For Everton FC inspired street art I recommend a walk around the stadium. 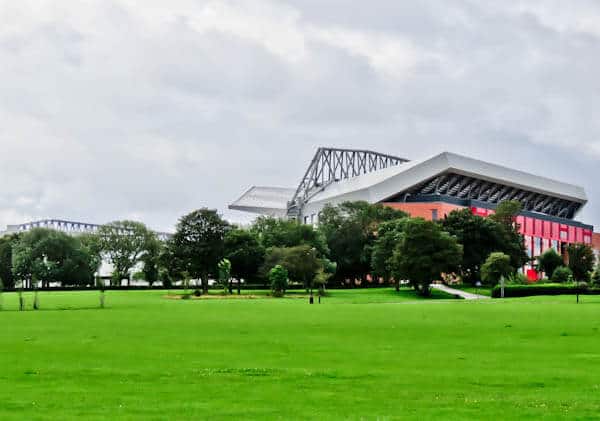 It’s difficult to talk about Liverpool without mentioning the famous Liverpool FC.  Did you know that Anfield is a short walk across Stanley Park from Goodison Park.  Read about an Anfield stadium tour on my travel blog. 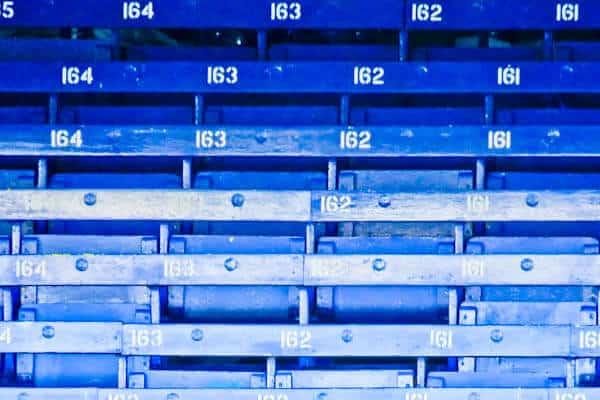 Did you know that Goodison Park was once an important World Cup venue?  It not only held three Group 3 matches but also a quarter final and semi final.  Could you imagine the excitement in Liverpool today if it hosted World Cup games?  As a matter of fact, Pele famously met Eusebio (of Portugal and Benfica) during a Group 3 match.  The semi final was between West Germany and Soviet Union, imagine the tension during the Cold War era. 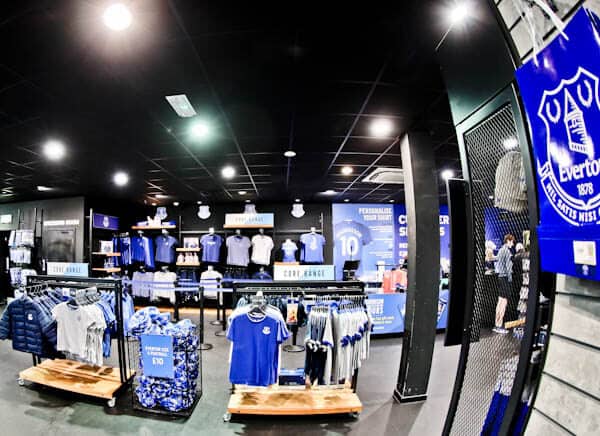 If you take the Goodison Park stadium tour you’re entitled to a healthy discount in the Everton One Club Shop which is opposite the Dixie Dean statue.  As well as the current Everton football shirt, they also sell the historic ones.  Why not treat yourself to a historic Everton shirt to wear during your tour? 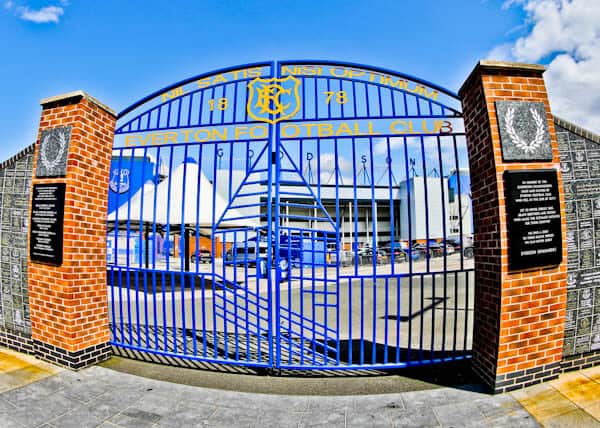 Enjoy the Goodison Park tour.  If it’s a historic British stadium you wish to see then you’ll be rewarded.  If you’re an Everton FC fan, you’ll also be rewarded for taking the tour.  However, if you’re in Liverpool to see Anfield, why not hop across the park to see the blue side of Liverpool?