Hillsborough is one of the most historic stadiums in the UK.  Reasons to take a Hillsborough Stadium Tour;

Hillsborough is north of Sheffield in the Owlerton district.  For this reason, you may want to view hotels near Hillsborough Stadium Sheffield.

Where is Hillsborough Stadium? 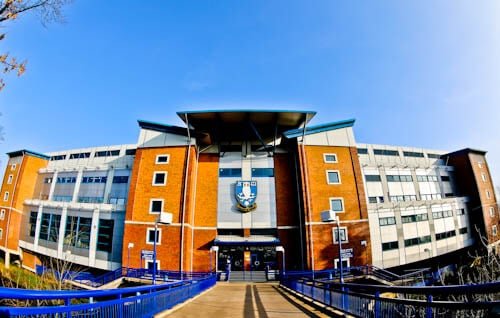 Hillsborough Stadium is in Owlerton, North Sheffield.  It’s certainly too far to walk from the city center therefore you must take a bus.

How to get from Sheffield Station to Hillsborough Stadium

You have the option of 2 buses to Hillsborough from central Sheffield.  Take either bus 7 or 8 towards Eccleston.  Alight when you reach Hillsborough Park which is a 1 minute walk from the stadium.  Finally, the buses leave from Bay A4 in Sheffield Interchange which is adjacent to Sheffield train station. 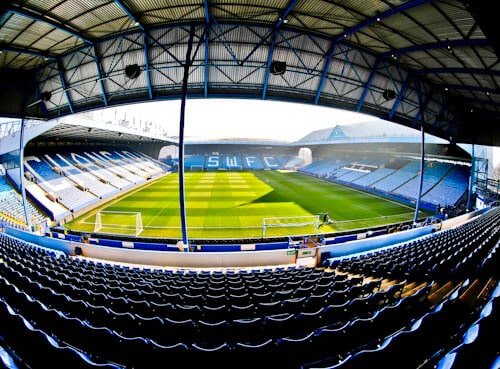 The official Hillsborough capacity is 39,732.  As a result it’s the 19th largest stadium in the UK.  A common question is, ‘who plays at Hillsborough Stadium?’.  Hillsborough is home of Sheffield Wednesday, a historically successful English team.  When was Hillsborough stadium built?  It was built in 1899.  However, Sheffield Wednesday were founded in 1867 making them one of the oldest football clubs in the world.  Did you know Hillsborough was also a World Cup stadium?  In 1966 it hosted West Germany twice and German legend Franz Beckenbauer scored on both occasions.  Of course, West Germany went on to be runners up at Wembley Stadium.

Why are Sheffield Wednesday called the Owls? 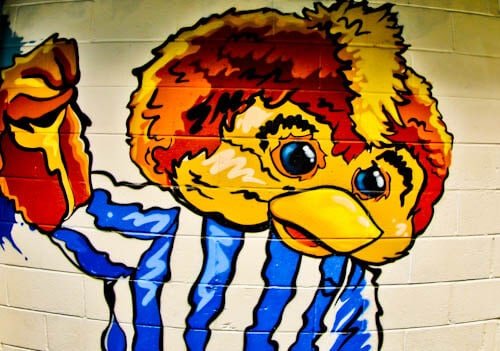 Firstly, the origin of the nickname ‘The Owls’ has nothing to do with the bird.  As I mentioned, Hillsborough is in the Sheffield suburb of Owlerton.  Owler refers to the Alder trees in this area.  As a result, their nickname originated from the Alder Tree.  Another question you may ask is ‘why is it Sheffield Wednesday?’  I personally can’t think of another team named after a day of the week.  Back in the 19th century, the players were Sheffield traders therefore only available on Wednesdays.  Hence the name, Sheffield Wednesday. 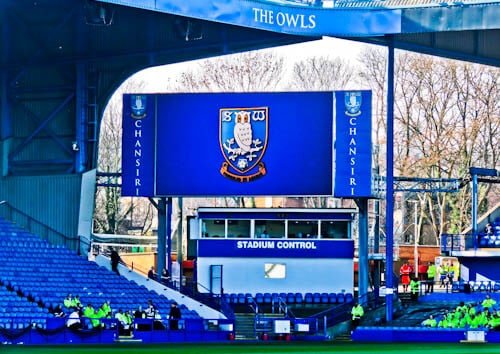 I must mention the Hillsborough disaster as it was the worst disaster in not only British football history but in all sports.  As a result of a human crush in a standing area, hundreds of fans were injured and 96 were crushed to death.  The Hillsborough disaster happened in 1989 and forced changes to stadium safety.  It’s because of this disaster that football stadiums in England are now all seater.  Additionally, there’s no high steel fencing between the pitch and stadium.  As part of the stadium tour you’ll visit both tiers of the Leppings Lane stand where this infamous event took place.

Who Played at Hillsborough Stadium

During the Hillsborough disaster it was not Sheffield Wednesday who were playing.  It was in fact an FA Cup semi final between Liverpool FC and Nottingham Forest.  Liverpool fans were in the Leppings Lane stand therefore it was their fans who suffered.  Why were they playing at Hillsborough?  The semi finals of the FA Cup are played at a neutral venue.  As both Liverpool and Nottingham are northern teams, Hillsborough was the chosen venue.  Nowadays of course, both the semi finals and final of the FA Cup are held at Wembley Stadium regardless. 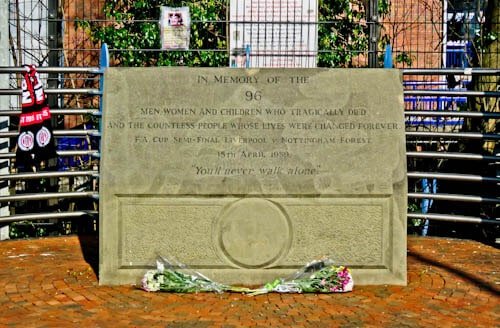 The Hillsborough Stadium Disaster Memorial is in front of the South Stand.  Furthermore, there’s also a Hillsborough memorial outside Anfield stadium in Liverpool. 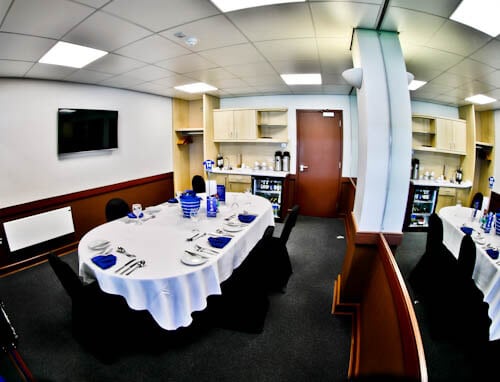 The South Stand of Hillsborough features 30 executive boxes.  You will visit a couple of the boxes as well as enjoy the excellent view they offer.  As a matter of fact, you can even check out the menu and wine list!

When Pele came to Hillsborough 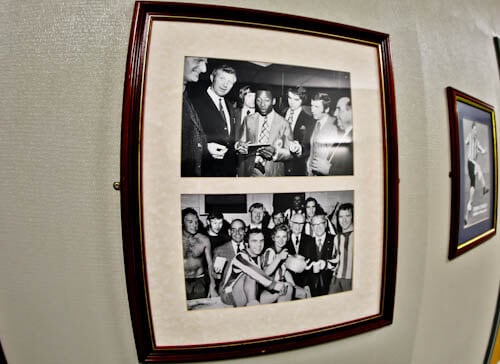 As you pass through the South Stand take note of the memorabilia on display.  Did you know the world’s greatest footballer, Pele, has been to Hillsborough twice?  Sheffield Wednesday hosted Santos of Brazil in both 1962 and 1972.  Pele played on both occasions and as you would imagine, Hillsborough was full to see this legend. 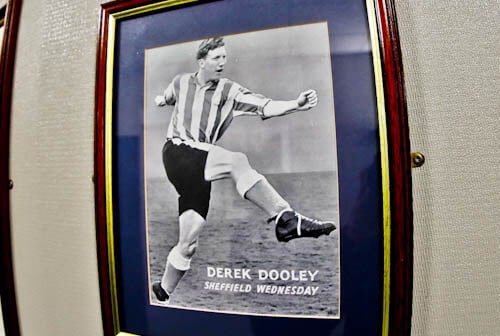 Derek Dooley is arguably the greatest ever Sheffield Wednesday player.  He scored 62 goals in 61 appearances for the Owls.  Unfortunately his career was cut short after a serious injury led to his leg being amputated.  However, afterwards he continued at Sheffield Wednesday and became manager from 1971 to 1973.  After being sacked, a series of events led him to city rivals Sheffield United.  He became club chairman and Sheffield United gained much success during this period.  For this reason, there’s a Derek Dooley statue outside Bramall Lane.  Should there be one outside Hillsborough too?  I think so. 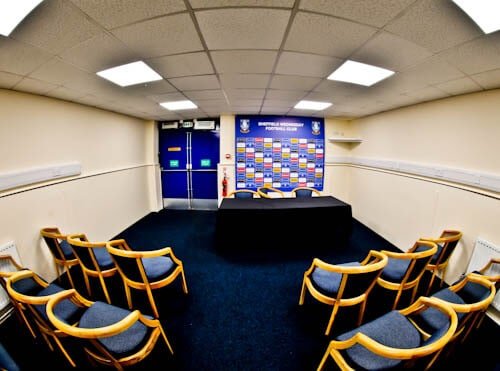 The Press Room is where Sheffield Wednesday hold press conferences.  Maybe it’s a post match press conference or when they announce a new player or manager.  You’re welcome to pose for pictures where the Wednesday stars sit. 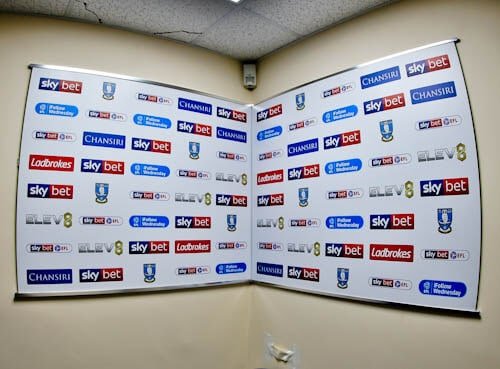 After a match you may see the players and managers giving a flash interview on TV.  You’re welcome to pose for photos or even make a video in front of the Championship sponsors. 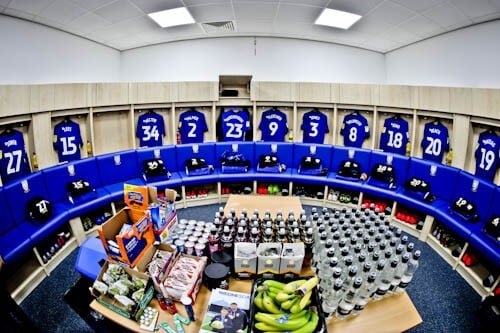 I took a Hillsborough stadium tour on a match day.  Consequently, staff were preparing the home dressing room for the Sheffield Wednesday players.  The shirts you see are the actual ones the players will wear during the match.  Additionally, the snacks on display are for the players.  I must say, this is the most genuine experience I have had on any stadium tour. 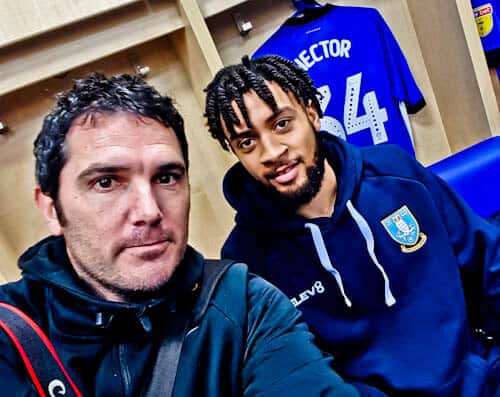 When I was in the home team dressing rooms I was lucky a few of the players had arrived early for the game.  Several members of the tour got their pictures taken with several players.  However, I must confess I wasn’t familiar with the Sheffield Wednesday team.  Luckily, Jamaican international Michael Hector who was on loan from Chelsea agreed to take a selfie with me.  Lastly, if you’re there on match day, players arrive outside the South Stand and the Kop therefore you can meet and greet them there. 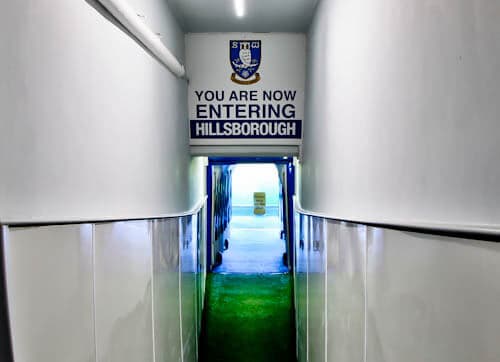 An iconic place to take your picture is under the ‘You are now entering Hillsborough’ sign in the players tunnel.  Something the guide does here which is very professional is he makes sure the tunnel is empty for each person who wishes to take a photo here.  As a result every member of the tour is guaranteed an excellent photo.  Lastly, this is one of the narrowest players tunnels in the world! 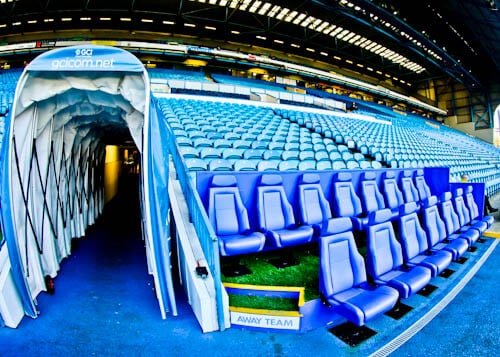 Once you’ve walked down the players tunnel, you’re invited to sit in both the away team as well as the home team dugout.  Additionally, it’s from pitch side where you have a wonderful vantage point of the stadium.  At this point the guide will tell you the Hillsborough Kop was the first kop in world football.  However, the first kop in football was at Manor Ground, the first Arsenal stadium. 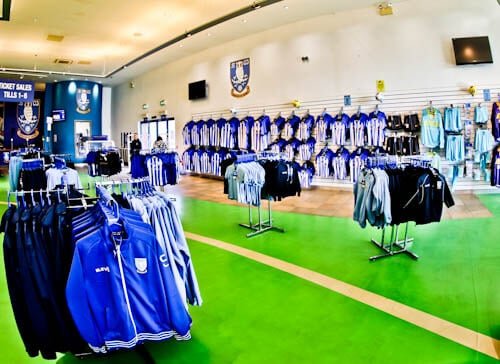 Firstly, Hillsborough stadium tours are not so frequent therefore you must book in advance.  However, they don’t frequently advertise stadium tours on their page.  Check the ticket office page for upcoming tours, if it’s blank that means there are no tours.  If you’re visiting as part of a large group, I’m sure they can organise a private tour for you.  The tour lasts for over 2 hours so make sure you have enough time!  Finally, tours start and finish from the Owls Megastore.