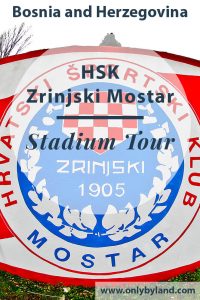 HSK Zrinjski Mostar are a football team with Croatian roots but based in Bosnia and Herzegovina.  Reasons to take a tour of the Bijeli Brijeg Stadium whilst in Mostar include;

I was staying in the Hotel Kapetanovina with views of the UNESCO Old Bridge during my stay in Mostar.  From this hotel I was able to walk to the stadium, additionally I passed several points of interest of the city on this route. 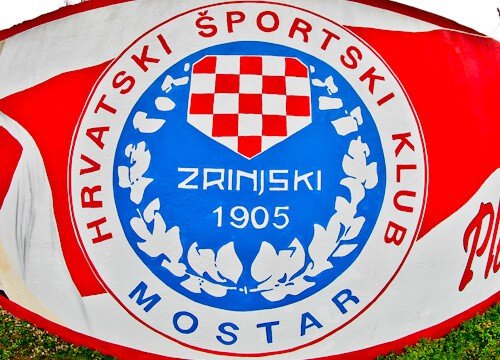 The Bijeli Brijeg Stadium is located in western Mostar.  This part of Mostar is Croatian, for this reason the club colors are the traditional red and white squares.  The season I visited, HSK Zrinjski became champions of the Premier League of Bosnia and Herzegovina.  During Yugoslav times the stadium was home to rival team FK Velez who famously won 2 Yugoslav Cups.

HSK Zrinjski is the oldest club in Bosnia and Herzegovina dating back to 1905.  Furthermore, during Yugoslav times from 1945 to 1992 the club was banned from playing due to its Croatian roots.  However it reformed in 1992 after the creation of Bosnia and Herzegovina.  A famous player for the team is Luka Modric who played on loan in Mostar for a season.  Another Croatian football team, Hajduk Split were allowed to play during Yugoslav times because leader Tito was a fan!

Most cities have a local rival, for example Liverpool and Everton as well as Galatasaray and Fenerbahce.  FK Velez is the rival of HSK Zrinjski.  When these 2 teams play it’s known as the Mostar derby.  In fact during Yugoslav times, FK Velez were a successful team who played at the Bijeli Brijeg Stadium.  Nowadays, FK Velez play on the Bosniak side of Mostar but are no longer the best team of Mostar.  As you can imagine with such a brutal history in Mostar, a local derby can be a very lively affair! 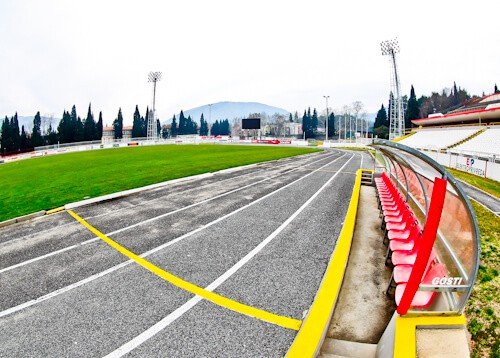 You’re welcome to enter the stadium and visit anywhere you wish.  A popular part of the stadium is the players bench.  Many famous Bosnia and Herzegovina (and Yugoslavian) national team players have used this bench.  In addition it makes a good location to fill up your Instagram feed!  Croatian and Real Madrid legend, Luka Modric has also used this bench. 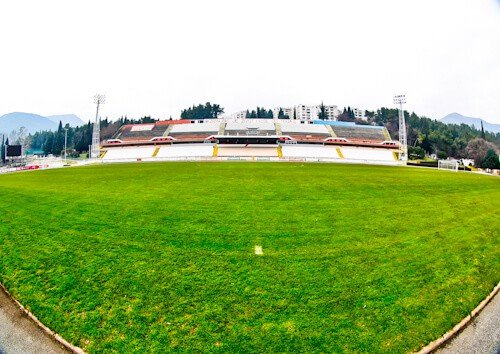 The Bijeli Brijeg Stadium is relatively small in comparison to other European stadiums.  The capacity is 9,000 seats in the all seater stadium.  Furthermore it’s fascinating that this same stadium used to hold 25,000 spectators as an all standing area.  In the light that this club had 50 years of history taken from it, you must appreciate that they even have a stadium!  In fact some would argue this is a stolen stadium.  The stadium was built in the Yugoslav era and was in fact the stadium of Mostar rivals, FK Velez.  Due to the fact that part of the Mostar war was between Croats and Bosniaks, FK Velez had to move to the Bosniak side.  FK Velez do wish to reclaim their stadium but even today it is not considered safe for them as this is the Croatian part of Mostar.

Behind the Goal Mouth 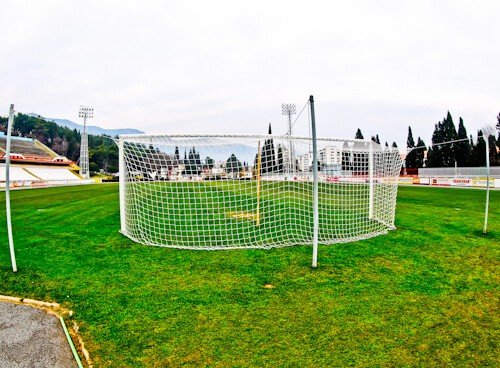 The pitch is surrounded by a running track and you may walk around this for different vantage points.  In fact you can keep fit whilst traveling by running a few laps!  As a general rule, you shouldn’t stand on the pitch, but if you think it makes a good Instagram photo then go for it. 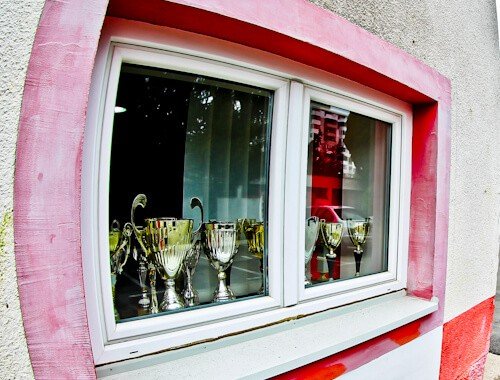 There is not an official museum but you can view several trophies through the club shop window.  Of course, HSK Zrinjski are regular champions of the Premier League of Bosnia and Herzegovina therefore you may see this trophy. 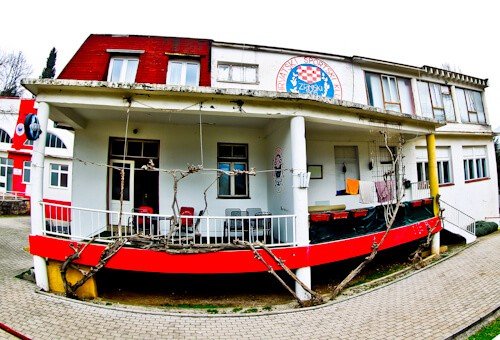 You will not find the most spectacular club shop at the stadium but the people are friendly and welcoming.  They will be excited that someone has visited the football stadium and be keen to teach you facts about the club.  In addition you can buy drinks and snacks here.

Enjoy your visit to the Bijeli Brijeg Stadium

For the latest events and pictures, check out the official Facebook page.  Furthermore, you can check out the HSK Zrinjski website (Croatian) for fixtures and team news etc..