Things to do in Kuwait City Kuwait + Images

Kuwait City is famous for the recent Iraq invasion.  However, a lot of rebuilding has been done since then.  Here are a few things to do in Kuwait City Kuwait;

As the capital of prosperous Kuwait, hotels in Kuwait City are on the expensive side.  Good luck finding a deal. 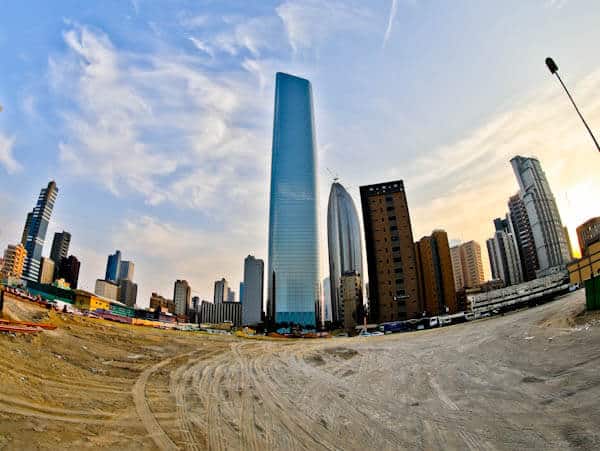 Kuwait City is a huge modern city in the desert.  Which desert is Kuwait in?  It’s located in the Kuwaiti Desert in between Saudi Arabia and Iraq.  As a result, Kuwait City is one of the hottest cities on earth and temperatures regular exceed 50°C.  Try combat the temperatures by staying indoors during the day and only venture out at night or sunrise / sunset. 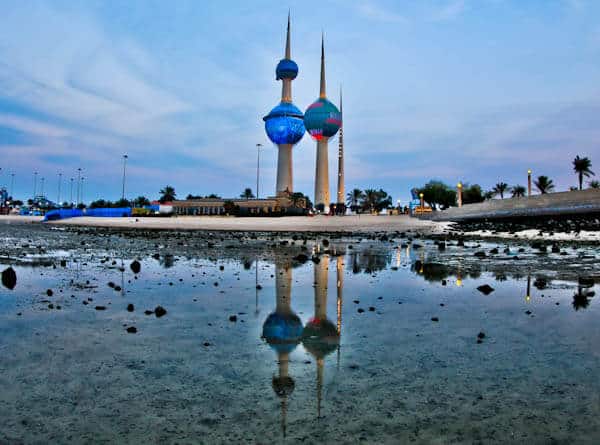 The iconic Kuwait landmark are the Kuwait Towers.  They’re built on a small cape overlooking the Persian Gulf to one side and the city on the other.  Originally, these were part of a series of water towers but are the last ones remaining.  The tallest is 187 meters and features 2 spheres.  As a matter of fact, the bottom sphere still serves the purpose of storing water.  However, the upper part of the lower sphere is a restaurant offering wonderful Kuwait City skyline views.  In addition, the upper sphere also serves as a viewpoint with cafe.  The second tower is 147 meters tall and its sole purpose is to store water.  Lastly, the third towers purpose is to store lighting equipment to illuminate the other towers  at night. 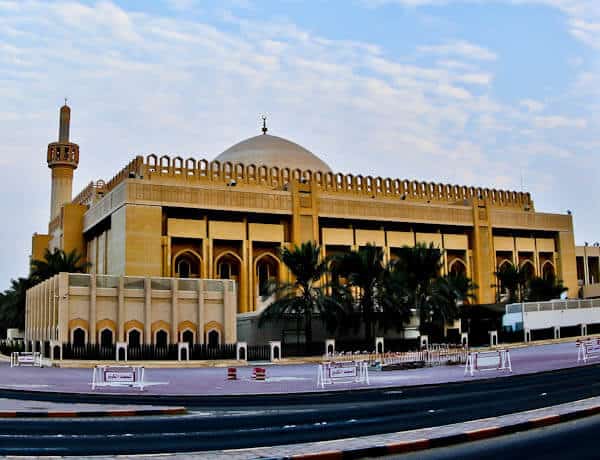 The Grand Mosque is both the largest as well as the most important mosque in Kuwait.  The interior has 20,000 square meters of space and can accommodate around 10,000 people at once.  This may seem like a lot of people but during Ramadan it will fill up.  The architecture style is Persian with the interior by far the most stunning.  Most importantly, to visit the beautiful interior you must be there at 9am, any day of the week.  Friendly, free tours are given in English. 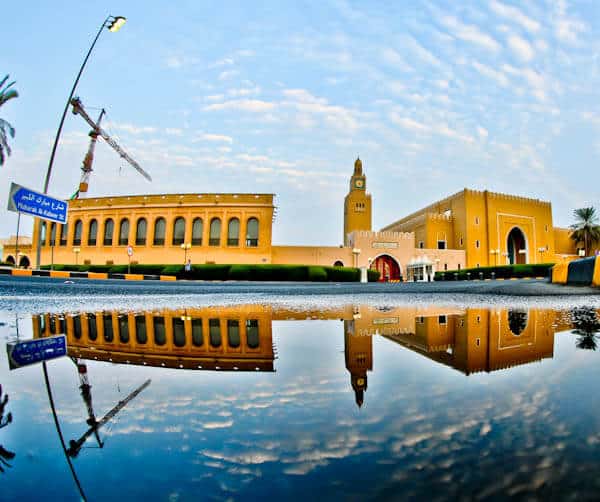 Seif Palace is opposite the Grand Mosque therefore it’s easy to visit these places together.  It serves as a home to the Kuwaiti royal family, however they rarely use it.  The iconic Clock Tower has been replaced as it was hit by a missile during the Iraqi invasion.  An interesting fact is the tower dome is decorated with pure gold.  Finally, adjacent to Seif Palace is the Kuwait National Museum. 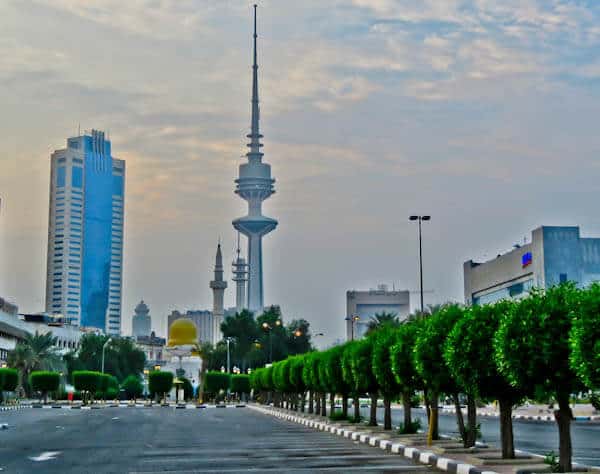 At 372 meters high, the Liberation Tower is the second tallest building in Kuwait.  For this reason, you can see it from virtually all over Kuwait City.  Construction started in 1990 before the Iraqi invasion.  Back then, it was going to be named the Kuwait Telecommunications Tower.  It received no damage during the war and was completed in 1993.  They then renamed this project, the Liberation Tower.  For stunning Kuwait City skyline views, visit the observation deck. 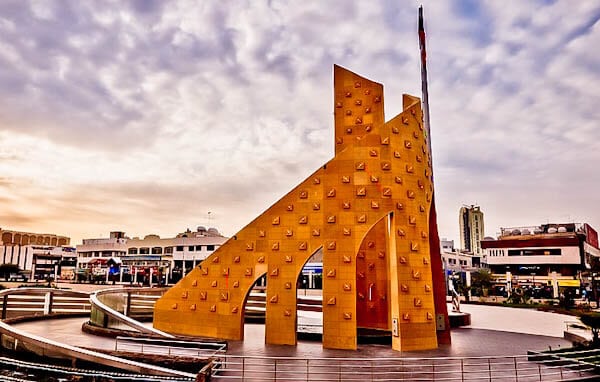 Safat Square is the main central square of Kuwait City.  As you’d imagine, it’s surrounded by restaurants, markets, souks as well as modern shopping malls.  It’s not too far from the huge Liberation Tower either.  Lastly, there’s a similar gold structure in Al Shaheed Park set in much more peaceful surroundings. 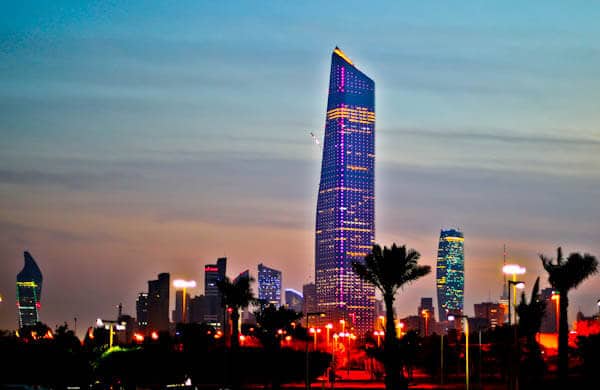 Al Hamra Tower is the tallest building in Kuwait City.  Not only is it identifiable for its unique shape but also because at over 412 meters tall, it towers over the rest of the skyscrapers.  As a matter of fact, it’s the tallest carved concrete building in the world.  It photographs beautifully from all over the city at both day and night. 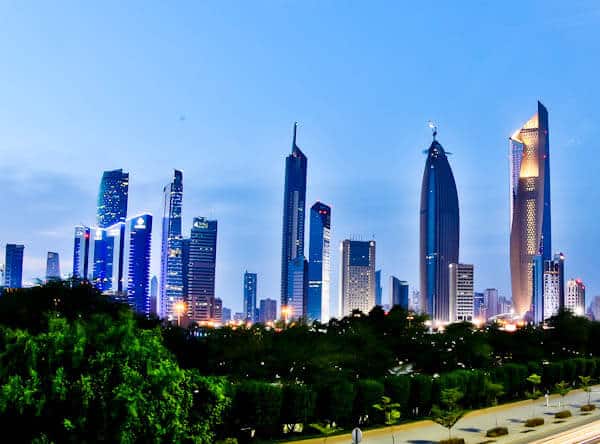 Al Hamra is the tallest building in Kuwait City at over 412 meters tall.  In addition, there are several other noteworthy skyscrapers (excluding the Liberation Tower).  The second tallest are the Al Rayah Tower as well as the National Bank of Kuwait Headquarters, both at 300 meters tall.  These are followed by the Kipco and Crystal Towers both at 240 meters tall.  The Al Rayah Tower is incredibly photogenic.  Finally, a plan to build the tallest building in the world is underway.  This building would be 1001 meters tall and called the Mubarak al-Kabir Tower. 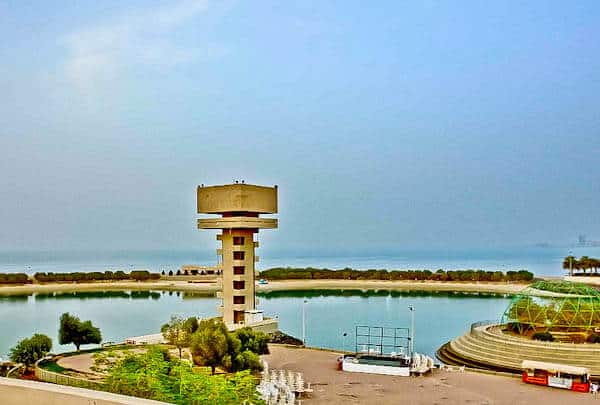 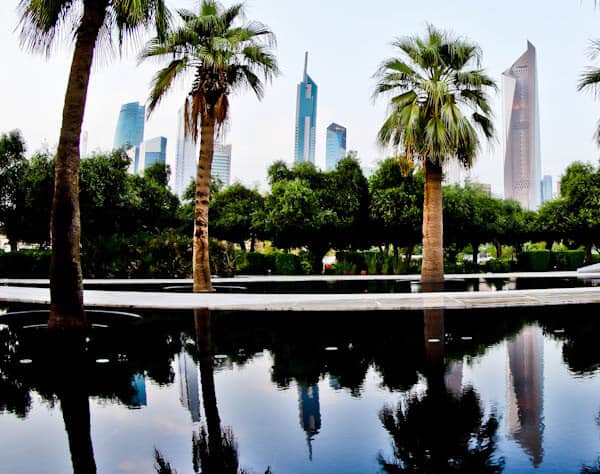 Al Shaheed Park is a peaceful park you must see when you visit Kuwait City.  However, due to the heat, I recommend you visit at sunset.  Not only is there a well kept park to explore but there are also wonderful views of the Kuwait City skyline.  The sun sets behind the Liberation Tower but if you’re lucky the whole sky will turn pink.  As for Kuwait City attractions, Al Shaheed Park is full of them.  You’ll find 2 museums, water features, gardens, live performances as well as numerous restaurants spread throughout the largest park in the city.  Did I mention, entry to the park is free? 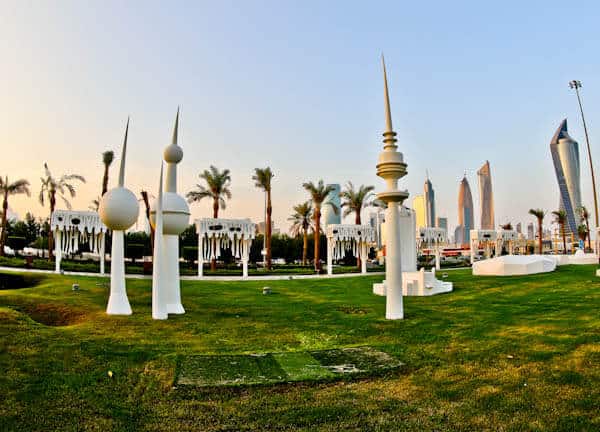 In Al Shaheed Park, there is a mini Kuwait City display.  What fascinated me is that you could almost line up the mini structures with the real ones in the distance.  If you’re exploring these Kuwait City landmarks, this part of the park will definitely give you some inspiration. 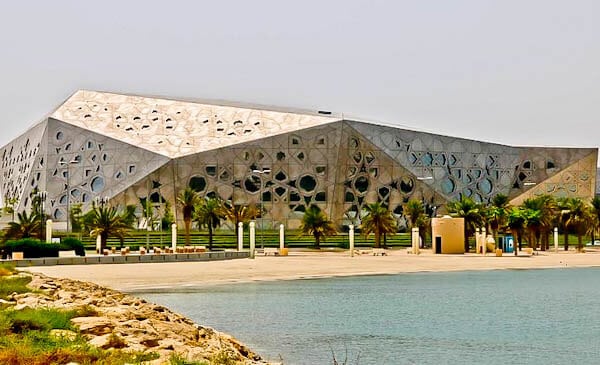 Opera is not something you’d expect in Kuwait City.  Nonetheless, there is a hugely popular Opera House there.  From the exterior, they are a stunning set of buildings which feature geometric Islamic patterns.  Check the schedule to see what’s on when you’re in town.  Alternatively, simply visit to admire the stunning Islamic architecture.  Have you seen the beautiful Harpa concert hall in Reykjavik, Iceland? 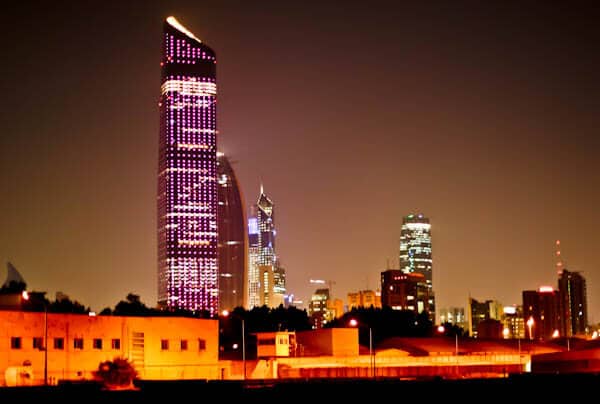 In between the Al Hamra Tower and Kuwait Towers is the sprawling Dasman Palace.  This is where the Iraq invasion began in August 1990.  Why at the Dasman Palace?  Because this was the location of the Emir of Kuwait, the highest member of royalty.  Although the Iraqis were unsuccessful in his capture, they certainly did a lot of damage.  Please note that photography is prohibited here and soldiers will delete your photos therefore take them discreetly and perhaps with the skyline as a background. 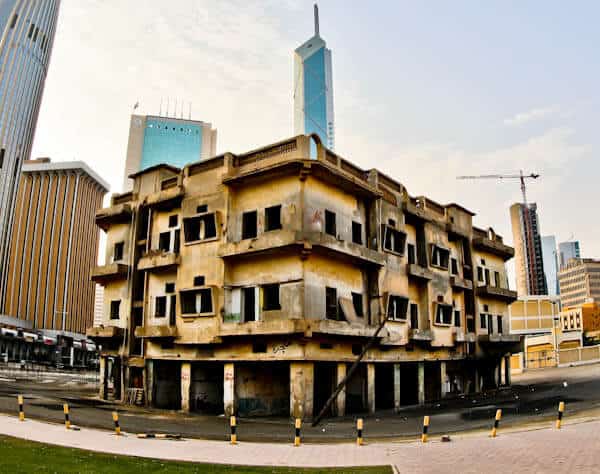 The first Gulf War happened in 1990 when Iraq annexed Kuwait over oil disputes.  Afterwards, 35 nations fought to liberate Kuwait from Iraqi occupation.  The war lasted around 7 months but a lot of damage was done.  As you explore Kuwait City, you may see some bullet hole filled reminders of this time.  However, due to the rapid building work in the city, these ruins are quickly being replaced.

Enjoy your Visit to the Kuwait City Landmarks and Attractions 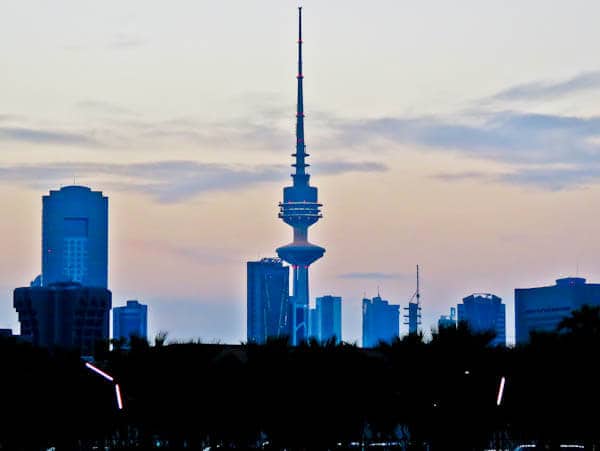 Enjoy your visit to this rapidly growing megacity.  But, don’t forget, it gets incredibly hot so prepare for that.  Enjoy.

Read about the things to do in Bahrain.