Las Vegas is the gambling capital of the United States.  For this reason, you’ll find several larger than life Las Vegas Landmarks;

You can find some incredible hotel deals in Las Vegas but be aware of the resort fees! 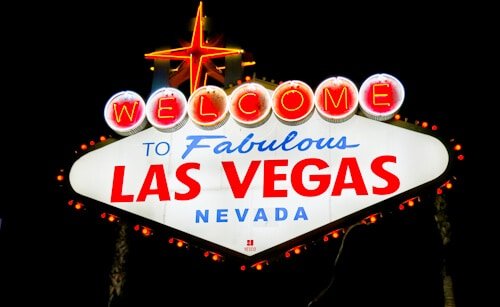 When you first arrive in Vegas you’ll already be able to see the huge casinos.  At the start of the strip, next to Mandalay Bay you’ll find the famous ‘Welcome to Fabulous Las Vegas, Nevada’ sign.  The good news is that there is parking and an organised queue so getting your picture here is a must! 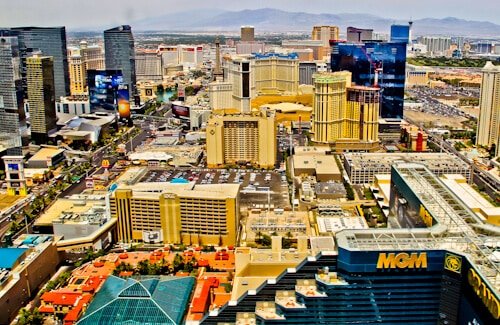 There is a Seinfeld joke about Las Vegas ‘ the biggest mistake you can make in Vegas is looking out the window at another casino and thinking, I can walk that!’.  You can see Aria in the left hand side of the photo, maybe it looks walkable from the MGM but with the Vegas heat, you’ll be extremely tired and covered in sweat by the time you get there!  You can get a 24 hour Deuce bus pass so you can be driven up and down the strip as much as you like (it stops at all casinos).  In fact you can take the Deuce all the way to downtown Las Vegas and the Fremont Street experience.  In the other direction it will take you to Las Vegas south premium outlets which answers the famous question ‘Where do I buy the Nike shoes?’.  The bus runs 24 hours a day, so you can visit everywhere all day. Las Vegas never sleeps!  Do you want a photo with Michael Jackson or Chewbacca?  You’ll find them and many other stars posing on the strip! 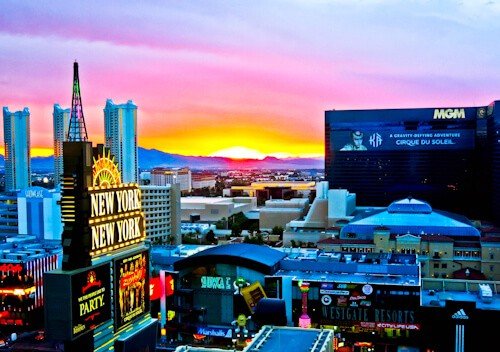 This is actually the sunrise from New York New York (above).  With all the bars and discos in Las Vegas it’s not unusual to come home when it’s already dawn!  Do your research before buying tickets to a nightclub from a street vendor.  Beware of scams involving nightclubs.  As a matter of fact you could watch the British documentary Scam City to learn about the scams in Vegas before going. 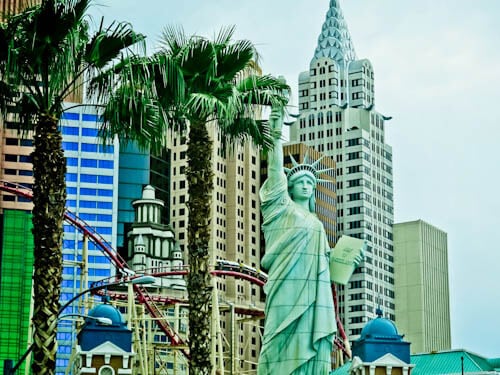 Did you know you can see the Statue of Liberty without visiting New York?  The Las Vegas replica is around half the size of the original.  Furthermore, instead of being surrounded by water, it’s surrounded by a roller coaster as well as the New York City skyline. 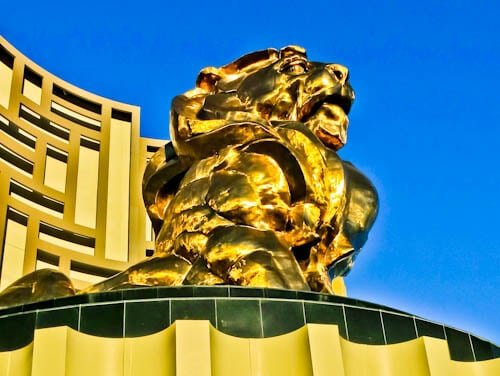 Opposite the New York New York casino is the MGM Grand Casino.  This casino is famous for its boxing nights and Floyd Mayweather successfully fought here on several occasions.  More importantly, you must take your photo with the huge MGM Lion. 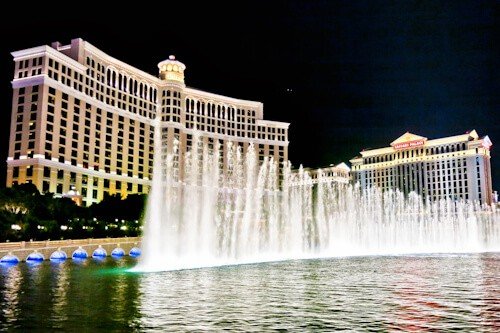 The fountains of Bellagio are one of the most famous and perhaps romantic points of interest in Vegas.  Every 30 minutes the fountains are choreographed to dance to famous music.  I was lucky enough to see the fountains attempt a moonwalk to Billie Jean!  You may recognise the fountains from the movie, Ocean’s Eleven.

Hire a Car in Las Vegas 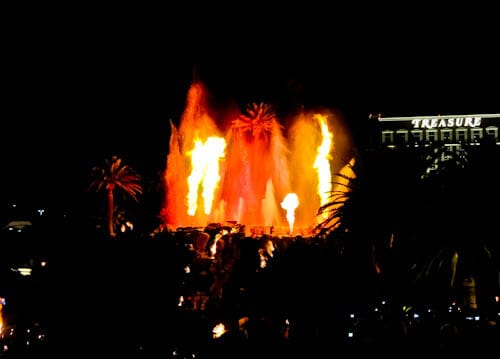 Another famous landmark on the strip is the Mirage volcano which erupts every half hour in front of the Mirage Casino.  As a result, you don’t need to go to Costa Rica or El Salvador to see a live volcano! 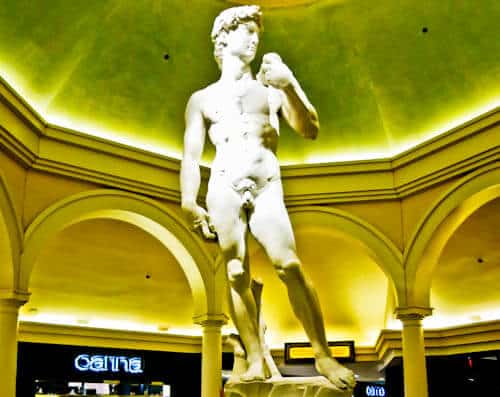 Caesars Palace is famous for its ancient Roman theme as well as the Hangover movies.  Additionally, there’s also a lifesize replica of David in the lobby.  The original David is of course a sculpture by Michelangelo located in Florence, Italy.

Venetian – Gondolas and Canals of Venice 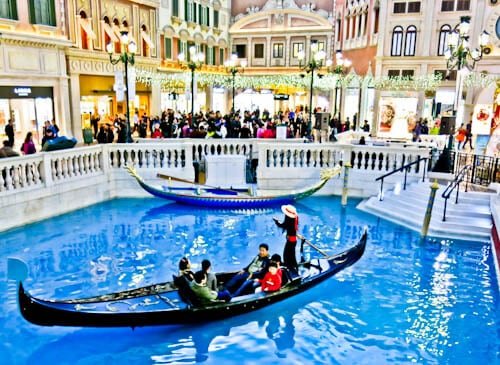 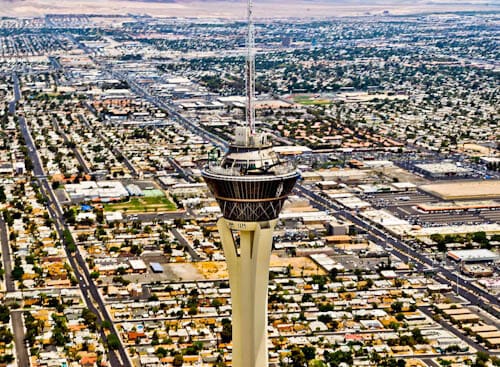 For a great photo of the strip you can take a ride up the Stratosphere where you’ll also find a theme park.  It’s not only the tallest building in Las Vegas but also in the whole Nevada state. 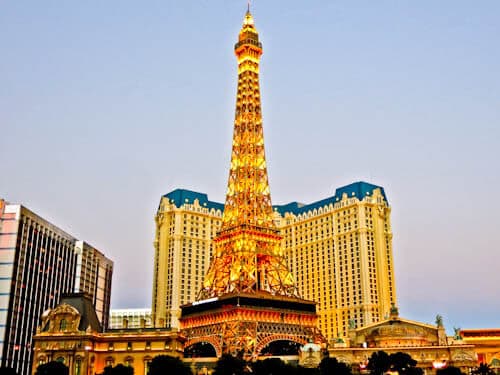 Do you want to see the Eiffel Tower without going to Paris? Visit the Paris Casino!  The Eiffel Tower of Las Vegas is half the size of the original.  Did you know there’s also a large replica of the Arc de Triomphe at Paris Casino? 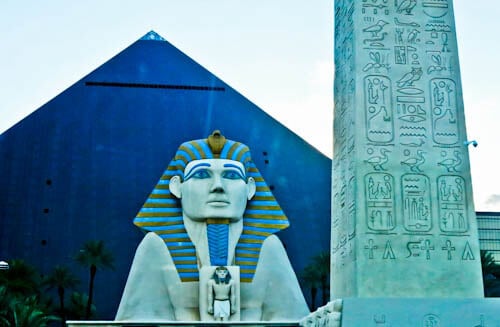 Do you want to see a pyramid without going to Egypt? How about see the famous Sphinx?  Visit the Luxor!  An interesting fact about the Sphinx of Las Vegas is that it’s larger than the original.  At night a beam of light shines from it and this beam of light is one of the strongest in the world.  For this reason, the Luxor Casino can be seen from space.  Moreover, the pyramid is bigger than the Pyramid of the Sun in Teotihuacan, Mexico. 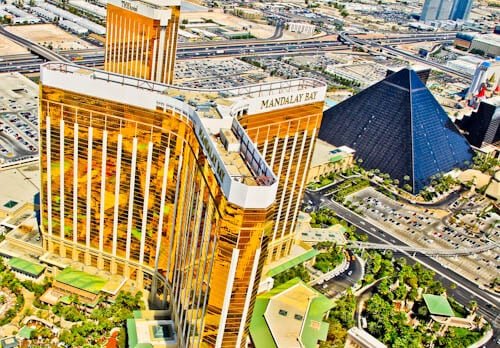 The majority of the Las Vegas landmarks I’ve mentioned have a theme but what about Mandalay Bay?  The theme of Mandalay Bay is luxury.  For this reason, the price is in the higher end range of Las Vegas casinos.  Finally, Mandalay Bay has featured in several movies including Rocky Balboa and The Hangover. 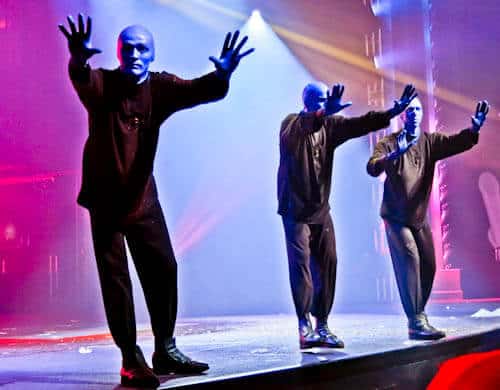 Las Vegas is famous for live shows and concerts.  I chose the famous Blue Man show but there are hundreds to choose from every night.  Additionally, A list stars such as Britney Spears, Celine Dion and Lady Gaga often hold Vegas residences where they perform a few shows each week. 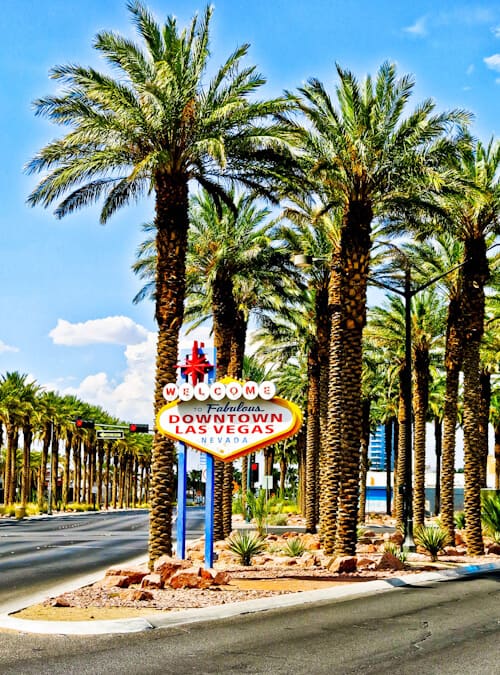 The light show in the evening is a must!  You’ll also recognize this place from countless movies including Last Vegas. 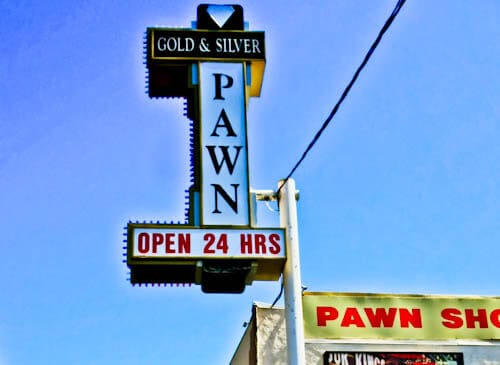 You’ve probably seen the History Channel series, Pawn Stars.  This is filmed in downtown Las Vegas and you’re welcome to visit the store.  Firstly, take your photo in front of the iconic signs which you see on the show.  When you go in you’ll see items which have been on the show for sale.  In addition, there is a lot of Pawn Stars themed merchandise on sale.

Day Trip to the Grand Canyon 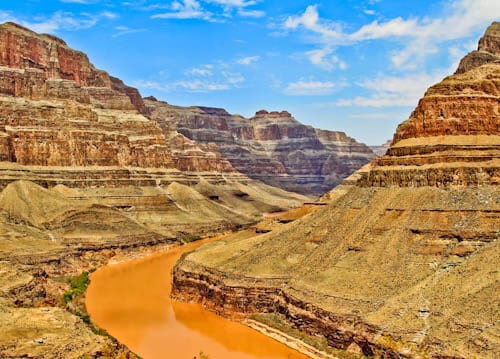 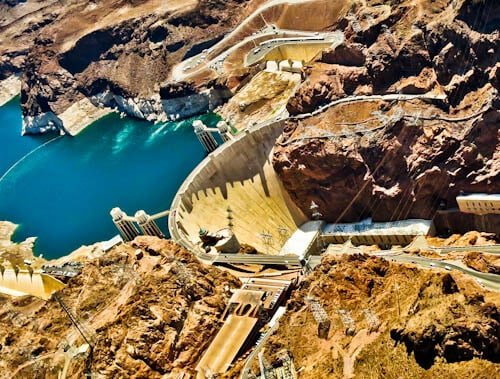 The advantage of the drive to the west rim is that you can stop at Hoover Dam on the way.  Once at the site, you’ll get better photos of the canyon and you can also stand dangerously close to the edge.  I’m sure some people taking selfies on the edge must fall off but it’s an Indian Ranch so rules are quite relaxed.  If you did have the urge to take a helicopter over the canyon when you’re there you can also take them from the western rim.  In addition, you can also pay extra and take a walk on the Grand Canyon Skywalk which is a U shaped glass walkway over the canyon.

The advantage of the helicopter tour directly from Las Vegas is that you’ll be picked up from your hotel by limousine and taken to the heliport.  From the heliport you’ll fly over;

You’ll then land at a remote spot in the middle of the canyon and enjoy lunch and champagne.  Additionally, you’ll get some great aerial shots of the above points of interest on the way and time to take plenty of shots in the canyon.  Finally, you’ll be back in Vegas in no time!

How to get from Las Vegas to San Diego 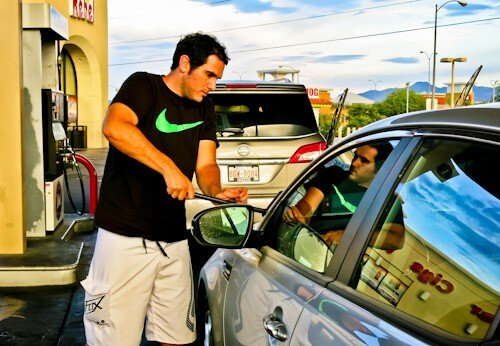 I hired a car to drive from Las Vegas to San Diego.  Driving in the US is easy as well as more cost effective and convenient than taking the bus.  The US is set up for driving as opposed to taking buses like in South America.  For this reason, I will drive all the way up the west coast to Seattle.  The route to San Diego is simple, I-15 south.