Things to do in Lisbon Portugal + Belem

Lisbon is the capital of Portugal and therefore full of interesting attractions.  Here are a few things to do in Lisbon;

It is possible to walk to most of the points of interest of Lisbon.  There is a convenient metro system which helps you get to locations such as the airport or train station.  I stayed at the 1908 Lisboa Hotel which is perfectly located in Intendente. 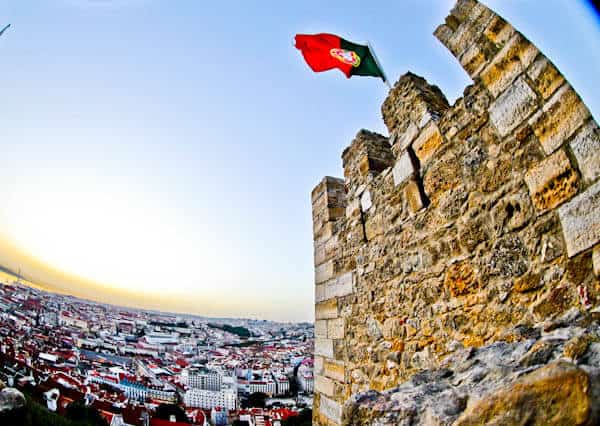 Sao Jorge is a Moorish castle on a hilltop in Lisbon.  The citadel dates back to the 2nd century when Romans built the first fortifications.  During the 10th century the fortifications were rebuilt by the Moorish tribes and today it remains a Medieval style castle.  Entrance fee is about €8 and I highly recommend visiting late afternoon for sunset over Lisbon. 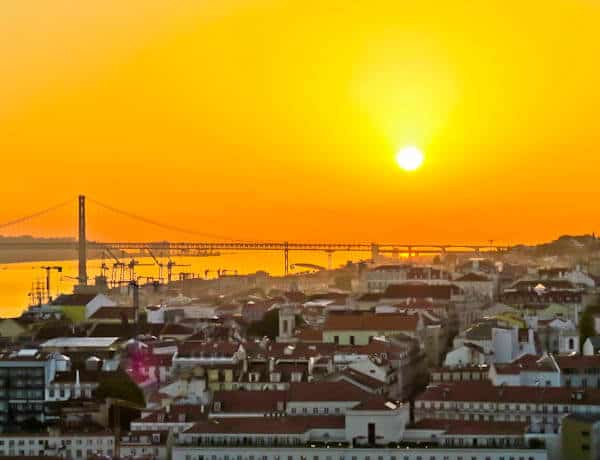 I recommend visiting Sao Jorge early evening just before sunset.  As a result, you’ll witness a stunning sunset over Lisbon.  More importantly, it shouldn’t be too hot at this time of day either.  There are many easily identifiable points of interest from the viewpoint.  For example, you can see the Commerce Square and all the colorful buildings surrounding it.  When the sun has set the first point of interest to be lit up is the Santa Justa lift.   As a matter of fact, if you stand directly facing the lift, you can photograph it with the road leading up to it. 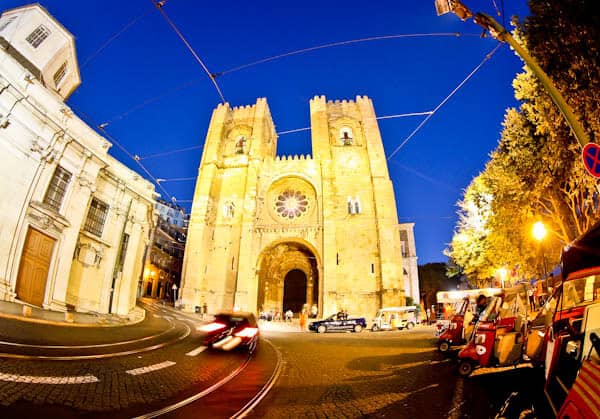 Lisbon Cathedral is known in Portuguese as Sé de Lisboa.  It was built in the 12th century and has been modified throughout the years. It’s architectural style is a mix of Roman, Gothic and Baroque.  You’ll pass this as you walk up and down to Sao Jorge Castle.  The yellow trams pass by here too so it’s possible to photograph it as a tram passes.  Finally, if you’re starting the Camino Portugues from Lisbon, this will be your starting point. 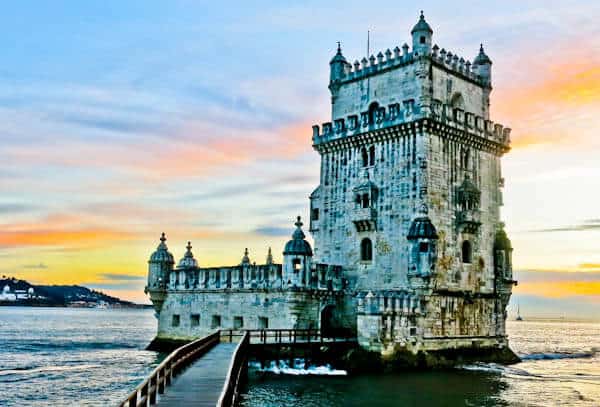 Belem Tower is known in Portuguese as Torre de Belem.  It’s a UNESCO world heritage site and also it’s incredibly photogenic.  The tower is located in a strategic position at the mouth of the Tagus River.  It was built at the start of the 16th century to defend Lisbon.  To reach Belem Tower you can take bus number E15 from the historic center of Lisbon.  These leave regularly and should take around 25 minutes.  However, during rush hour, this bus can sit in traffic.  For this reason, consider taking a tram going west from this point. 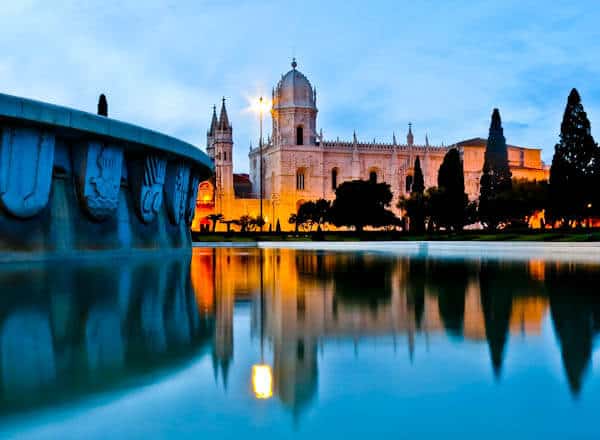 The Jeronimos Monastery was devoted to the Order of Saint Jerome.  However, it was secularized at the start of the 19th century.  For me, it’s some of the most impressive architecture in Lisbon.  As well as the nearby Belem Tower, this is also a UNESCO site.  Lastly, to get to the monastery, take the same route as you do to Belem Tower and it’s more or less opposite. 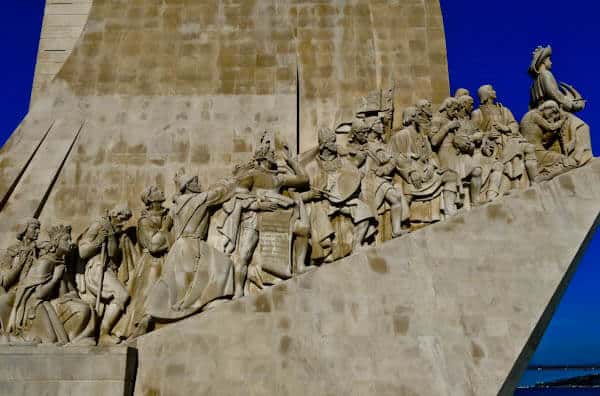 As you visit Belem Tower and Jeronimos Monastery it’s likely you’ll pass by the Discoveries Monument.  This monument is an honor to the Portuguese Age of Discovery in the 15th and 16th centuries.  Strangely enough, this is the time period when the Portuguese started the European slave trade as well as colonization. 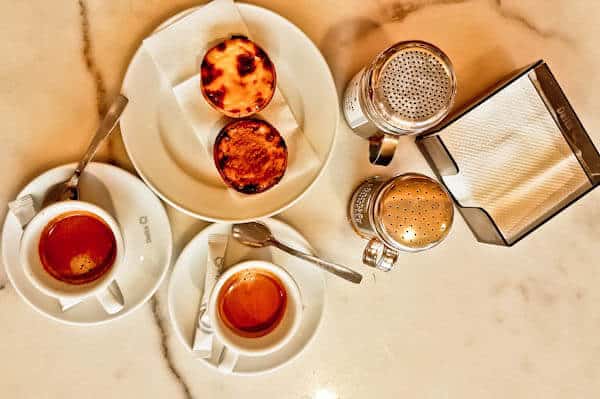 There is no better place to buy a Portuguese tart than straight from the factory.  Belem is home to arguably the most famous custard tart factory in Portugal.  As a matter of fact, they produce thousands per day and supply much of Lisbon.  When the bell rings this means that fresh tarts are ready.  Check out the Belem Tarts website for more pictures. 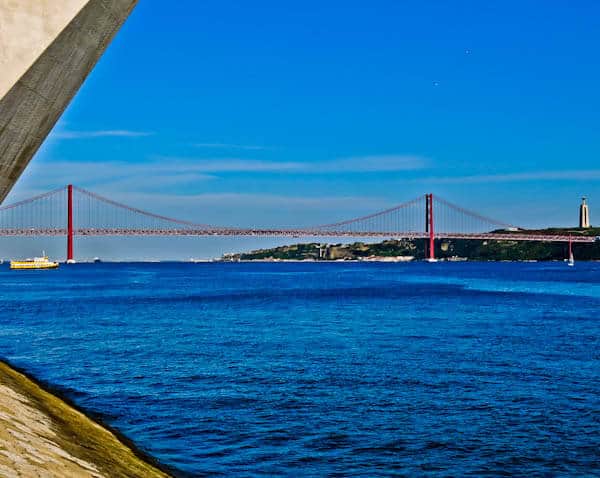 Firstly, the 25th April Bridge is often compared to the Golden Gate Bridge, one of the famous San Francisco landmarks.  Rightly so, because it’s also a huge red suspension bridge.  An interesting fact is that it was also designed by an American bridge company. 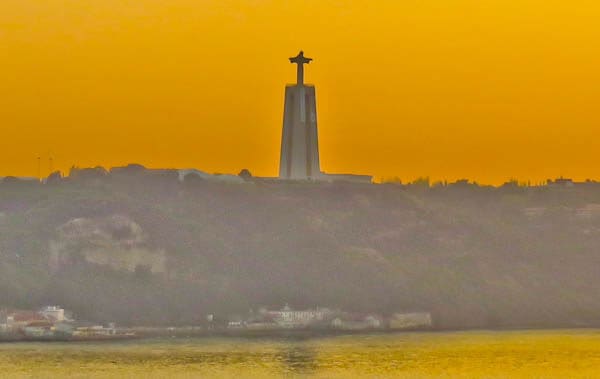 The most famous Christ statue in the world is of course, Christ the Redeemer in Rio, Brazil.  As Brazil is a former Portuguese colony, it’s no surprise that Lisbon has its own Christ Statue.  Although, it’s not as famous as the one in Rio, many tourists take a trip over the river to see it up close.  Lastly, did you know there’s a similar Christ statue in Tegucigalpa, Honduras? 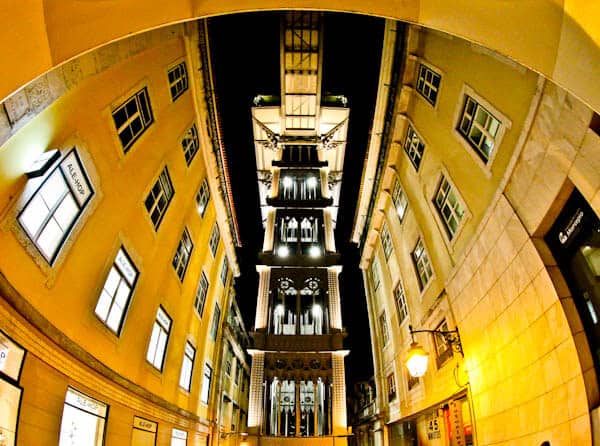 The Santa Justa lift is located in the historic center of Lisbon.  Its purpose is to connect the lower city with Carmo Square.  For this reason it’s sometimes referred to as Carmo lift.  There is a viewing platform at the top offering wonderful views over the city.  The designer of the lift was a Lisbon born student of Gustave Eiffel.  He wanted to create a masterpiece in his own city.  Moreover, he managed to create this masterpiece whilst solving a problem at the same time.  The problem was of course, the steep walk to Carmo Square. 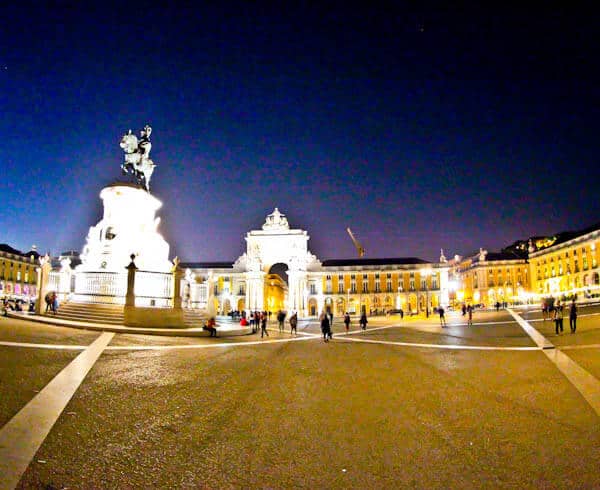 Commerce Square is known in Portuguese as Praça do Comércio.  It’s located next to the Tagus river.  Portugal used to have a royal family and the second last king of Portugal, Carlos I was killed in this square.  He was shot and killed whilst passing through in a royal carriage by members of the Republican party.  Two years later the Republican party would overthrow the Portuguese monarchy.  Finally, the square is huge and incredibly difficult to photograph.  I found the best place to photograph it was from Sao Jorge Castle. 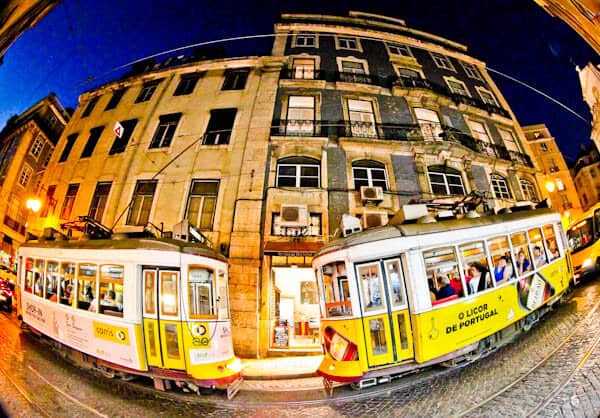 The 1908 Lisboa hotel @1908_lisboahotel is conveniently located in Intendente, Lisbon. You can walk to the major points of interest of Lisbon from here. In 1908 the building won a prestigious Portuguese architectural award, hence the name, 1908 Lisboa Hotel. Check out @1908_lisboahotel for more pictures of the hotel and interior.

The trams pass in front of the 1908 Lisboa hotel which is a unique structure in Lisbon.  It won a prestigious architectural award in 1908 which is where the hotel took its name.   A picture of a traditional yellow tram passing in front of this hotel is proven to do well on Instagram.  Take this shot early morning when there isn’t much traffic. 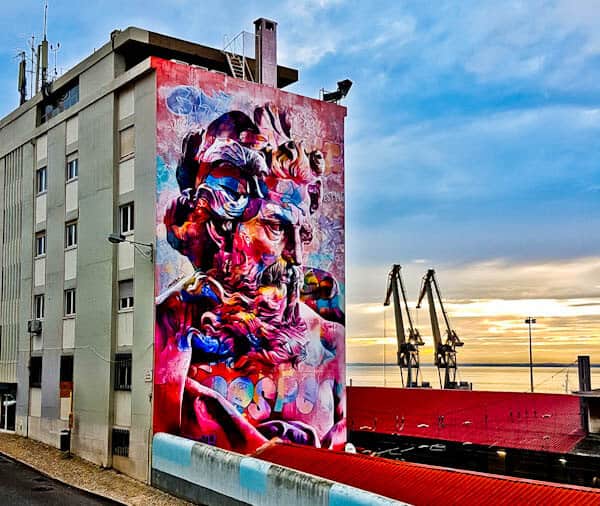 Keep your eyes open for street art as you explore Lisbon Portugal.  Portugal is becoming a top street art destination and Lisbon is no exception.  If you want to see the street art photographed above follow the Camino Portugues for around 1 km east of the cathedral. 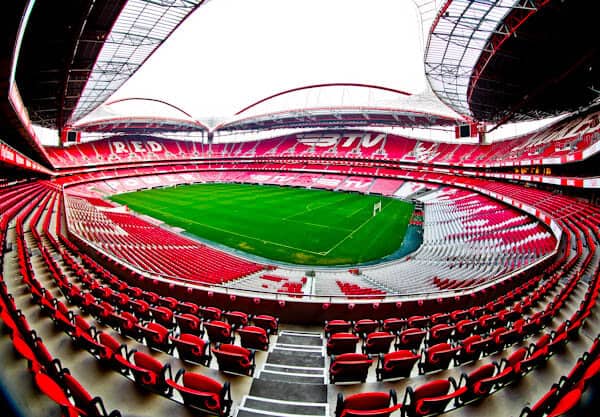 Lisbon is home to one of the best football stadiums in the world, Estadio da Luz.  On a stadium tour you’ll see the modern stadium from various different angles.  Additionally, you’ll also meet the famous Benfica eagles which fly around the stadium before games.  Furthermore, Benfica have the best football museum you’ll ever visit.  The museum ties the history of the club with that of Lisbon.  You are guaranteed a good experience, alone or with your family and can easily reach the stadium by the Lisbon metro.  Read my in depth stadium tour experience at the Estadio da Luz. 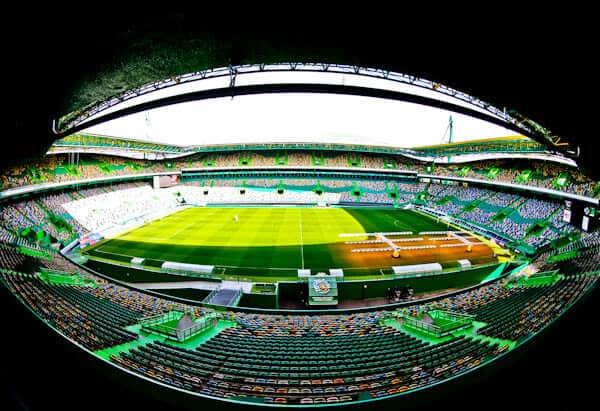 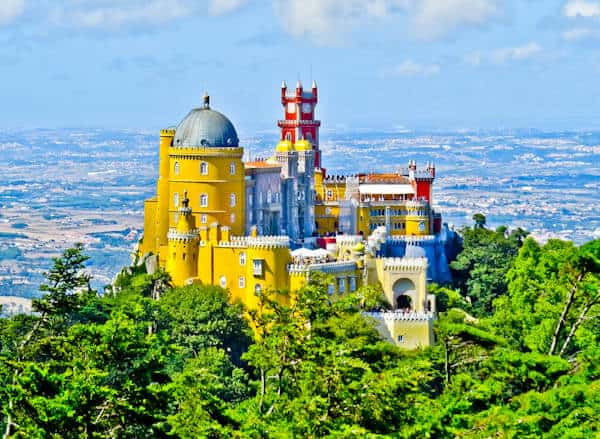 Sintra and its surroundings are a UNESCO world heritage site.  The main draw is the picture perfect Pena Palace (above).  One side of this palace is yellow and the other red.  In addition, there’s also a wall covered in the traditional Portuguese azulejos.  You are guaranteed Instagram worthy images when you visit Pena Palace.  Other notable points of interest in Sintra are the Castle of the Moors, Sintra Palace as well as Quinta da Regaleira.  Moreover, the town of Sintra has lots of traditional Portuguese tiled streets and colorful buildings.  A short bus ride west of Sintra is Cabo da Roca which is the westernmost point of continental Europe.  Sintra is a short train ride from Lisbon and they leave from Lisbon Rossio station every 30 minutes.  Read about my experience in Sintra.

How to get from Lisbon to Porto by Train 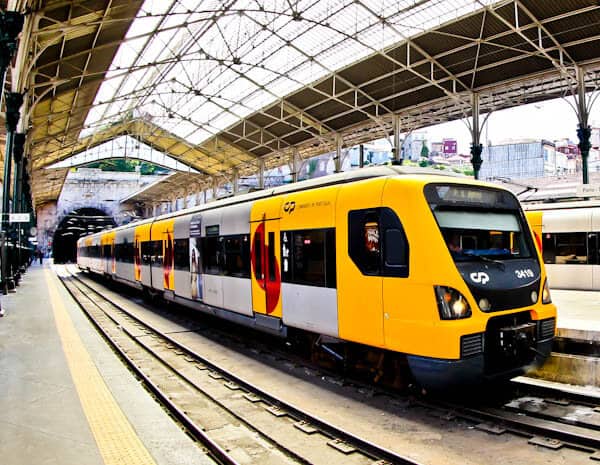 There are several trains from Lisbon to Porto everyday.  The journey time is less than 3 hours and the train is very modern.  As always with trains if you book in advance you’ll get a lower fare.  The fare between Lisbon and Porto is around €25-€40 one way.

Porto to A Coruña