Madrid is the capital of Spain and therefore full of iconic landmarks.  Here are a few of the Madrid landmarks;

There are hundreds of hotels in Madrid therefore you’re likely to find some very good deals.  Madrid is a spread out city so a Hop on Hop off bus tour works well to see the Madrid landmarks 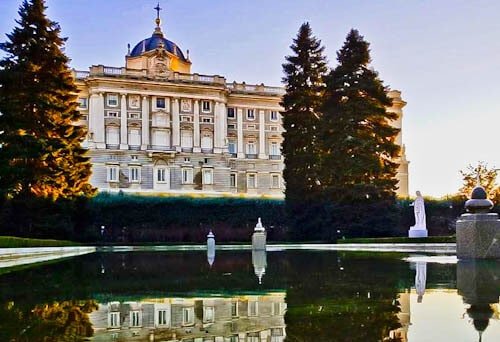 Of course Spain have a royal family but where do they live?  They live in the Palace of Zarzuela on the outskirts of Madrid, not in the Royal Palace.  The Royal Palace is in fact a museum to itself as well as the countries royal history.  However, it’s still used for royal ceremonies etc.  It was built in the 18th century over the ruins of a Moorish Castle.  Finally, if you wish to visit the interior, I recommend a skip the line advance ticket. 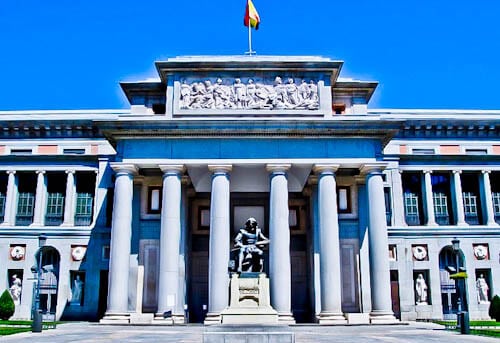 The Prado Museum is the main art museum of Spain.  The building deserves a visit in its own right.  However, inside are various pieces of art from some of the world’s most famous artists.  As a matter of fact, there are several pieces of artwork by Francisco Goya, Peter Paul Rubens, Hieronymus Bosch, Titian, Diego Velázquez and El Greco.  As you would imagine with all this iconic artwork, it’s an incredibly popular Madrid landmark, as a result, I recommend a skip the line advance ticket. 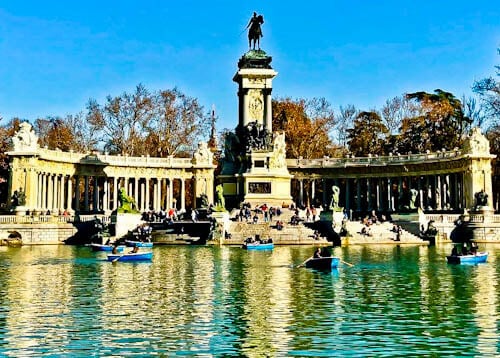 Retiro Park is the biggest park in the capital city.  There are several impressive landmarks within the park but the most impressive is the Palacio de Cristal.  I would recommend a boat ride in front of the palace as a top Instagram spot in Madrid. 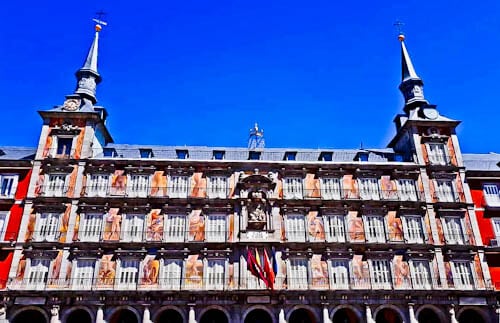 Plaza Mayor is the most popular place to visit in Madrid.  It was built in the 15th century and has been used for markets, bullfights, football games and even public executions.  It’s a huge plaza surrounded by residential buildings with a total of 237 balconies facing it.  No visit to Madrid is complete without at least a walk through the Plaza Mayor.  An interesting fact is there’s a much smaller and less crowded Plaza Mayor in Bilbao. 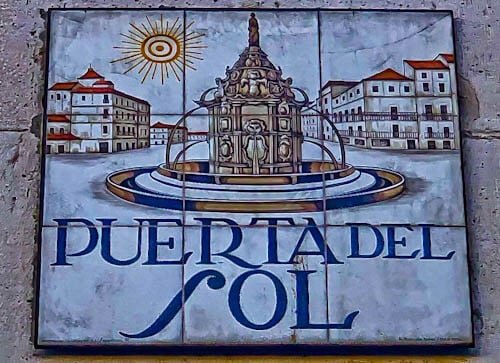 Similarly to Plaza Mayor, Puerta del Sol is a principal square of Madrid.  A notable building on the square is the former Post Office which features a clock tower.  An interesting fact about the clock tower is that it’s the centerpiece of the Madrid new years celebrations. 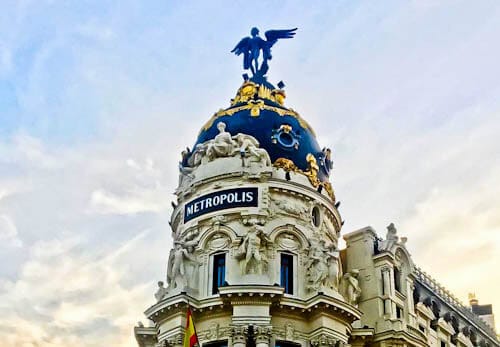 Gran Via is to the Madrid landmarks what La Rambla is to the Barcelona landmarks.  It’s the main street of the city and full of iconic buildings.  On a walk down Gran Via you’ll pass, Plaza de Espana, picturesque theaters, Plaza de Callao as well as several majestic buildings.  Two buildings which deserve a special mention are the Metropolis Building and the Capitol Building.  These are spectacular buildings which photographers will love capturing, especially at sunrise and sunset. 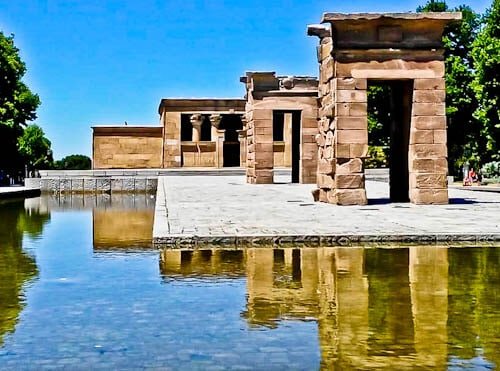 It’s possible to visit an Egyptian Temple in Madrid.  The Temple of Debod was dismantled in Aswen, Egypt and brought all the way to Madrid.  It’s was first built over 2200 years ago making it the oldest building in Madrid.  Surrounded by water, the temple is a dream to photograph.  Did you know there’s also a huge Egyptian Museum in Turin, Italy? There’s also an Egyptian Obelisk which was taken to Istanbul, Turkey. 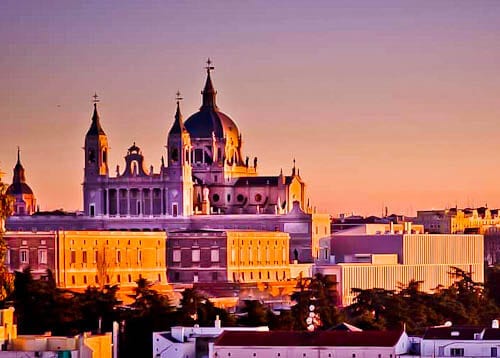 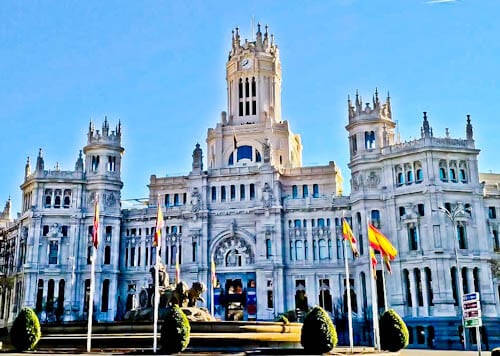 Cybele Palace actually includes 3 Madrid landmarks in 1.  Firstly, is the 20th century palace which used to be the main Post Office building.  Secondly is Cybele Plaza which the palace is named after.  Lastly is the Cybele Fountain which features the Roman Goddess Cybele. 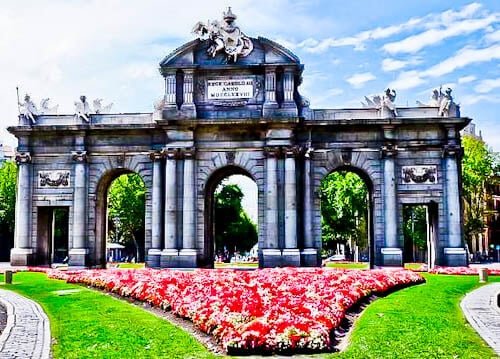 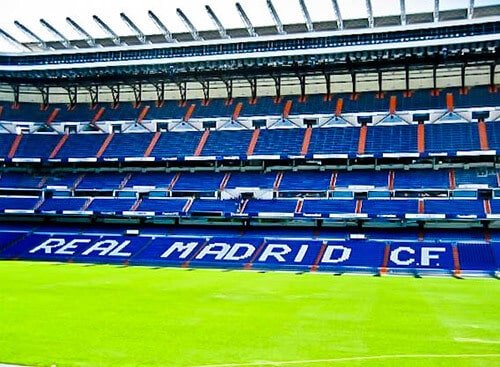 I mentioned they used to play football games in Plaza Mayor but today of course, they now play them at the Santiago Bernabeu football stadium.  This is the home to Real Madrid football club, the most successful club in the world.  You can take a stadium tour and visit inside the stadium as well as see all the trophies and stats on former players.  Are you an Atletico Madrid fan? you can tour the brand new Atletico Madrid stadium as well. 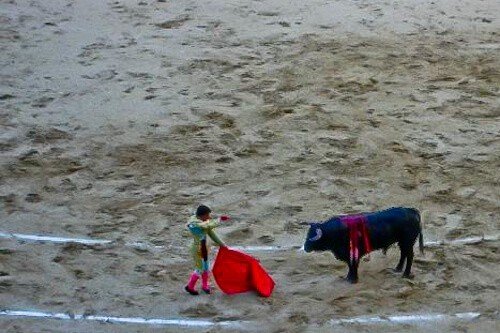 Spain is famous for bullfights, so there’s no better place to watch one than in the Madrid bullring.  Check the schedule, if you’re interested in a bullfight, there could be one on when you’re there.  Be warned, they do kill the bulls and it is pretty gory!  Additionally, if you don’t wish to see a bullfight, you can still take a stadium tour.

Segovia is a small town north of Madrid which is a UNESCO site.  The town features a picturesque Roman Aqueduct which warrants a visit in itself.  You can easily visit alone, alternatively, you can join an organised day trip from Madrid.  This day trip is often combined with Avila which is a UNESCO town famous for its Medieval walls.

How to get from Madrid to Seville 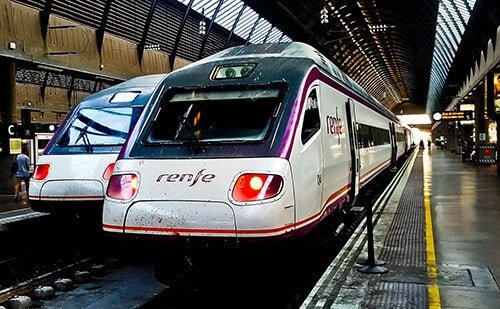 The Madrid train station, Atocha, is a tourist attraction in itself, it has a garden inside and also a memorial to the Madrid train bombings of 2004.  The 2 hour bullet train to Seville Santa Justa costs around €46 one way and is very impressive.  These trains leave quite frequently and go to most major cities in Spain and France.