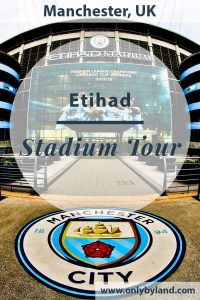 Manchester City are one of the most successful football clubs of recent history.  Thankfully, they open their stadium daily so you can see how a successful team works.  Reasons to take the Manchester City stadium tour include;

I was staying at the Staybridge Suites, Crowne Plaza double decker hotel and took the tram to the Etihad stadium.  To guarantee your place on a tour and to see tour times, I recommend you book online in advance. 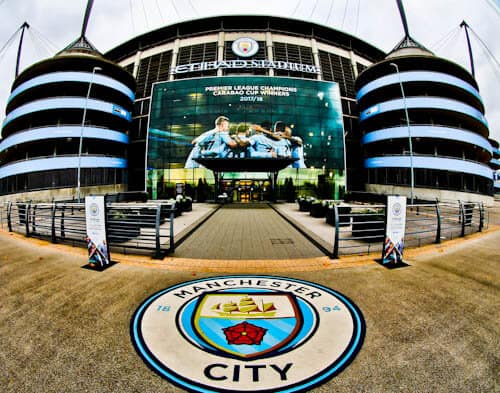 The Etihad stadium is located in Eastern Manchester.  As a matter of fact, it’s not too far from the center and you can walk.  Alternatively, you can take the tram from central Manchester to Etihad Campus stop which is opposite the stadium and club shop.  If you’re arriving from another city (or the airport) I recommend you take the train to Manchester Piccadilly station.  From there you can either walk or take the tram.  Once you arrive at the stadium you will see the iconic spiral staircase which resemble the San Siro in Milan.  An interesting detail is that the names of all the season ticket holders are written on these spirals.  It’s immediately clear that Manchester City really respect their fanbase. 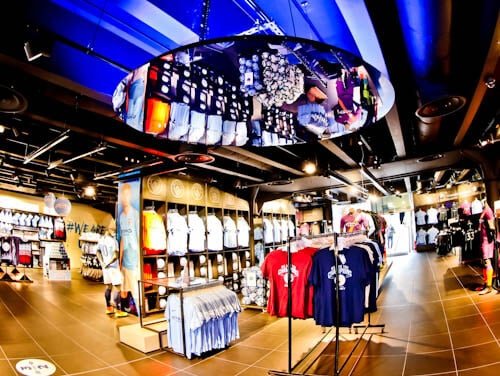 The meeting point for the Manchester City stadium tour is at the club store.  I recommend arriving early so you can browse the merchandise.  There are two floors full of everything Manchester City.  I’m not a Man City fan but I was so impressed with the merchandise that I bought a couple of things.  If you’re a fan, you could buy a Man City shirt to pose in when you visit pitch side later on, or better still, sit in Pep Guardiola’s seat.  As an added bonus, if you’re taking a Manchester City stadium tour, you will receive a 10% discount. 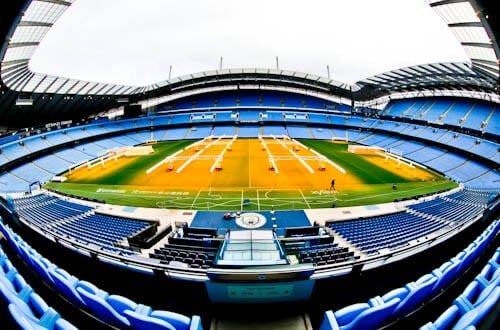 This view is the reason you take the Manchester City stadium tour.  The capacity is just over 55,o00 spectators which makes it bigger than Anfield in neighboring Liverpool.  Additionally, it’s the 5th biggest stadium in the Premier League and the 10th biggest in the UK.  Every seat has an excellent view, this is due to the unique stadium design which has won several architectural awards.  For this reason, fans of incredible architecture will enjoy this tour. 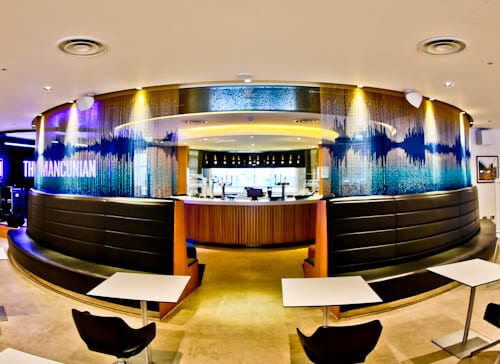 There are several VIP suites at the Etihad stadium.  The one you visit could be the Mancunian, as I did, alternatively, it could be another suite.  Whichever suite you visit, it will be full of local touches, unique to Manchester.  More particularly, unique to Manchester City.  The bar is interesting in the Mancunian suite as it features the sound waves of the Man City anthem, Blue Moon.  The Etihad stadium is also a concert venue and you’ll see pictures and autographed discs from the artists who have performed here. 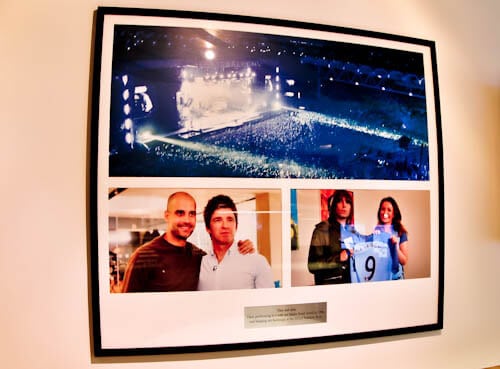 Manchester is a popular destination for Oasis fans.  If you’re visiting Manchester because of the Noel and Liam Gallagher connection then you must take the Manchester City stadium tour.  Depending on which VIP suite you visit, you’ll see a selection of Oasis memorabilia.  Oasis have performed at the Etihad stadium and there are several images of the brothers at the stadium.  Finally, if you ask your guide where the Gallagher brothers sit when they watch a match, he’ll point out the exact location for you. 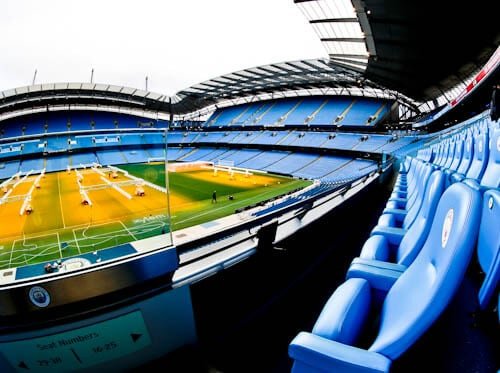 The stadium was originally built for the Commonwealth Games.  For this reason there’s a huge royal box, which was made for the Queen who attended the games.  An interesting fact is the royal box used to be the front row of the stadium.  When it was converted to a football stadium, the lower levels were added and playing field lowered.  An interesting fact is that the Manchester City owner is part of the royal family of the UAE, hence it is still a royal box.  To this day, the Etihad stadium has the largest VIP box of any Premier League stadium.  In case you’re wondering, you can sit exactly where the Queen sat and pose for royal pictures. 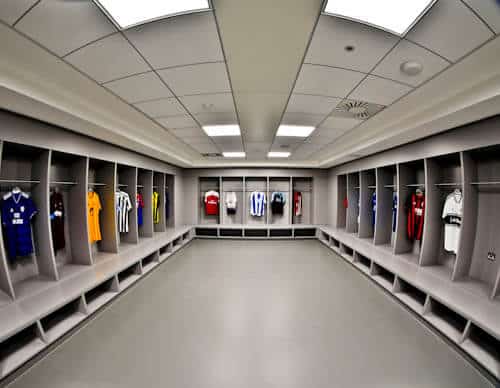 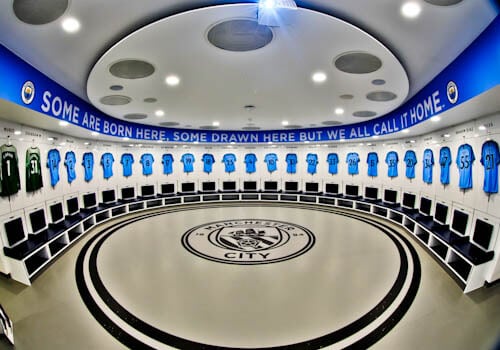 Do Manchester City have the best dressing in world football?  I believe they could have, and it could be the key to their recent success.  In addition to the homely dressing rooms are a series of warm up facilities, excellent bathroom facilities as well as an analysis section for the manager.  A nice little touch to the dressing room visit is that you’re invited to sit down and watch a short movie in here.  Furthermore, the screen you watch a movie on is the same one Pep Guardiola uses when giving a team talk. 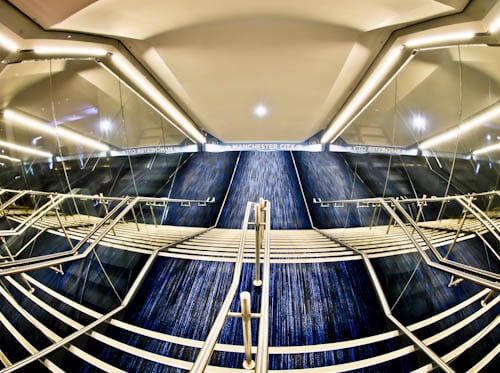 For any Man City fan, or football fan for that matter, a highlight of the Manchester City stadium tour is a walk through the players tunnel.  Where does the players tunnel lead to? the pitch of course!  Many footballing greats have walked through here including, Sergio Aguero, Kevin De Bruyne, Raheem Sterling, Lionel Messi as well as Cristiano Ronaldo.  Here, you have the chance to follow in their footsteps.  To add to the atmosphere, the tour guide will play the Man City theme music. 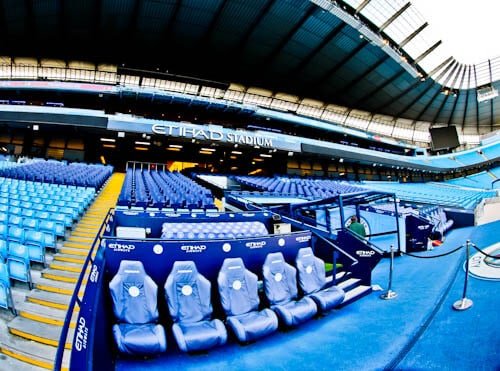 Do you want to sit where Pep Guardiola sits?  Of course you do, and you can!  Additionally, you can take your picture pitch side with the pitch and stadium as a backdrop.  If you’re visiting alone, the guide will be more than happy to take your photo, and the guide knows the best angle to photograph you from.  Several famous managers have used the Man City dugout.  As well as Pep Guardiola, managers including Claudio Ranieri, Sir Alex Ferguson, Arsene Wenger, Jose Mourinho and Manuel Pellegrini have all used this dugout. 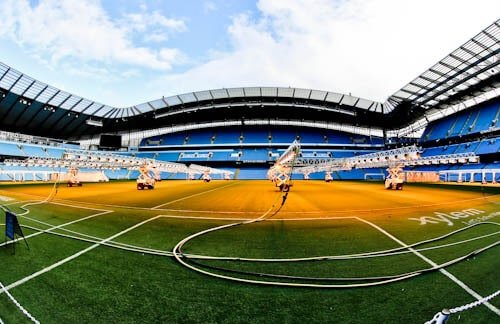 I recommend all people taking the Manchester City stadium tour to take a picture pitch side.  Additionally, if you’d bought some Man City merchandise from the club shop, here is the best place to pose in it! 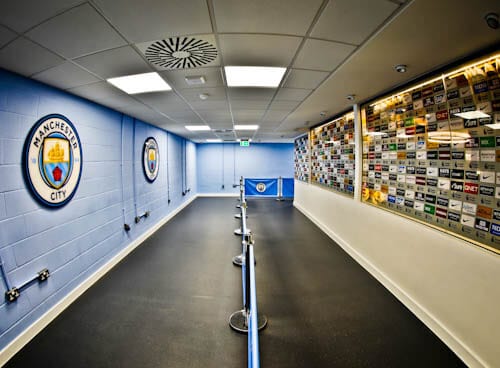 After the match, media will interview the managers as well as a few players.  You may take videos here (or photos) with the advertisements behind you, just like you see on TV.  It’s interesting to see the that there are different boards for the different media outlets, as they need different advertisements.  There is a man of the match trophy here, which you’re welcome to take a photograph with.  That is of course if you feel like you were the man of the match! 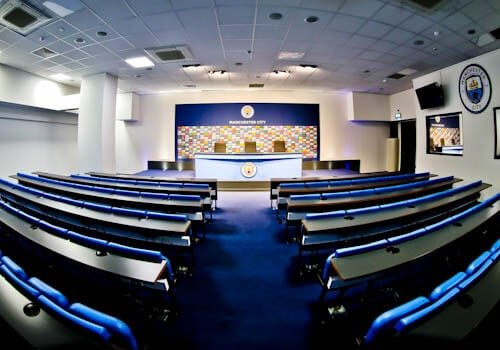 The post match press conferences are held at the Emirates stadium.  Of course, when they sign a player he’ll be unveiled at the City football academy press room.  Nevertheless, here is an excellent place to take photos in a Manchester City setting.  Pep Guardiola and the man of the match will sit here after the match.  As Man City are a top club, the press room is often packed with journalists.

After the tour you may be inspired to pass through the club shop again, after all, it’s on the way to the tram station.  To guarantee your place on a tour and to see tour times, I recommend you book online in advance.

How to get to the Manchester City stadium from central Manchester 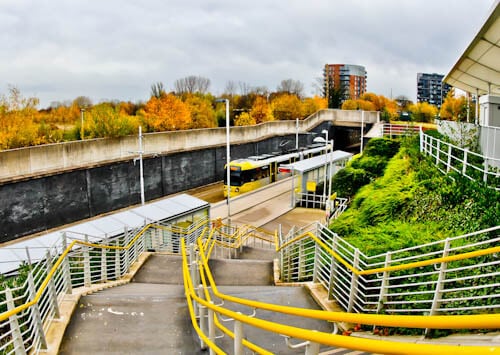 The easiest way to get to the Etihad stadium is on the light rail Metrolink system (the tram).  The closest station is Etihad Campus.  As a result you can easily reach the stadium from anywhere in central Manchester.  Alternatively, you can walk here from the center which takes around 30 minutes.  The nearest train station is Manchester Piccadilly.

Check out the fantastic Staybridge Suites, Crowne Plaza Double Decker hotel which offers panoramic views over Manchester.  In fact you can see the both the Etihad Stadium and Old Trafford from the top floor!