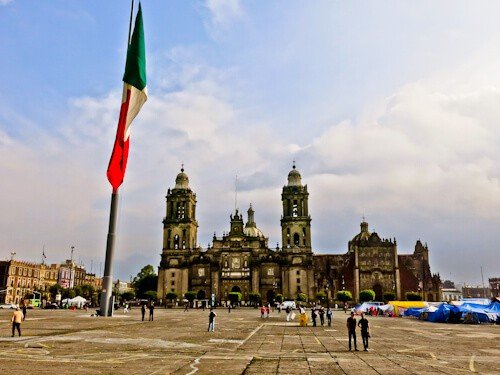 The Zocalo is a must see site in Mexico City.  As a matter of fact, it’s one of the largest city squares in the world.  The centerpiece of the Zocalo is a huge Mexican flag which is raised and lowered everyday as part of a ceremony.  Additionally, the Zocalo is surrounded by several Mexico City landmarks as well as Spanish colonial buildings.  Finally, the James Bond movie Spectre was filmed around the Zocalo during the Day of the Dead celebrations.

Rent a Car to Visit the Mexico City Landmarks

The Metropolitan Cathedral is a Baroque style cathedral built by the Spanish.  They drew inspiration from the Gothic cathedrals of Spain.  Over the years, the cathedral has survived several earthquakes.  However, like many buildings surrounding the Zocalo, it’s no longer level.  It’s possible to ascend the cathedral for panoramic views over the Zocalo. 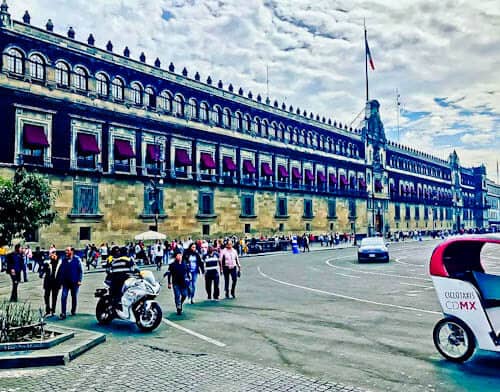 The National Palace is a huge 200 meter long building alongside the Zocalo.  An interesting event which occurs here is the annual Grito de Dolores.  This is where the current president rings a bell from the main balcony on Independence Day.  It signifies the first battle cry in the war of Independence from Spain.  Lastly, it’s free to enter the palace and explore the interior, albeit under heavy security. 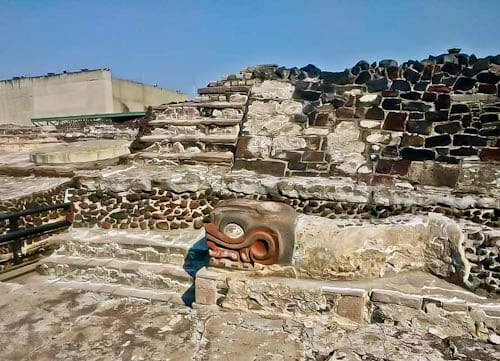 Adjacent to the Zocalo are the Tenochtitlan ruins.  This archaeological site dates back to 1325.  An interesting fact is that the Aztecs believed this was the center of the world. 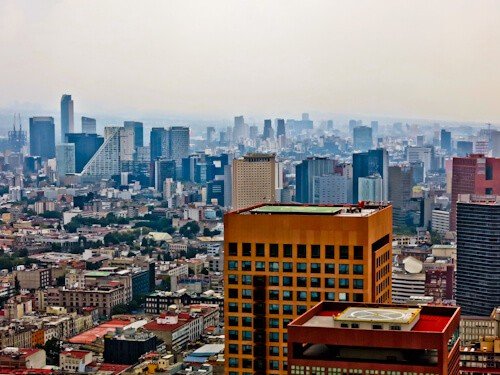 Torre Latinoamericana is one of the tallest buildings in Mexico City.  Additionally, you can take the lift to the top floor.  From the top floor viewing deck are wonderful city views as well as an aerial view over Bellas Artes Palace.  It’s amazing how big Mexico City is.  As a matter of fact, you cannot see an end to the urban jungle! 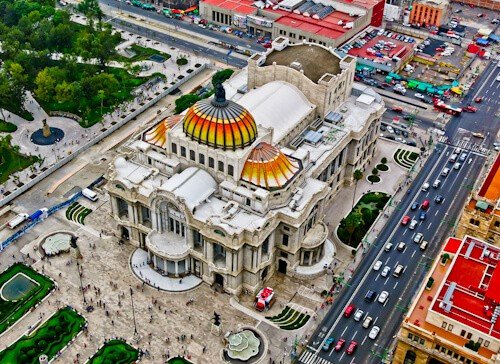 The Bellas Artes Palace photographs almost as well as the Taj Mahal in India.  It’s a shame that it’s in the middle of such a big city surrounded by traffic and people.  If it was in the country with a garden and lake I’m sure it’d be more famous than it currently is. 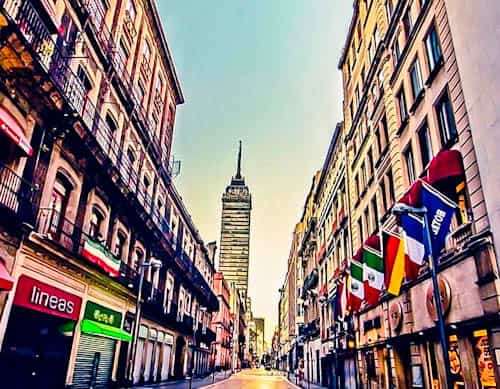 Calle Madero is a pedestrianised street full of shops, cafes, restaurants, bars and hotels.  If you’re visiting Mexico City as a tourist for the first time, I recommend you choose a hotel in this area.  As well as being within walking distance to several Mexico City landmarks, it’s also secured with tourist police.  Furthermore, if you need to travel further afield, the Mexico City metro is close by.  Lastly, one restaurant I recommend in this area is Sanborns Azulejos which is fairly priced Mexican food in a beautiful colonial building. 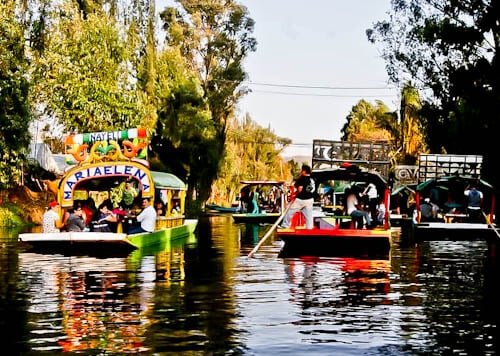 Xochimilco is a a series of canals built by the Aztecs.  Because of its history, it was awarded UNESCO world heritage status.  Today, the main purpose is tourism and you can take a boat ride through them.  As a matter of fact, because of the colorful boats it has become a top Instagram spot in Mexico City.  Finally, don’t be surprised if a boat full of mariachis approaches singing famous songs! 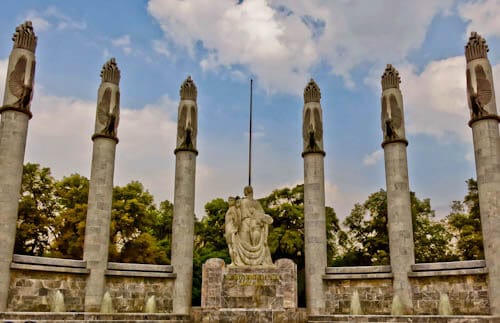 The castle was built on top of Chapultepec Hill.  As a result it offers photographers wonderful panoramic views of the Mexico City skyscrapers.  Lastly, to get to Chapultepec simply take the metro to Chapultepec Station. 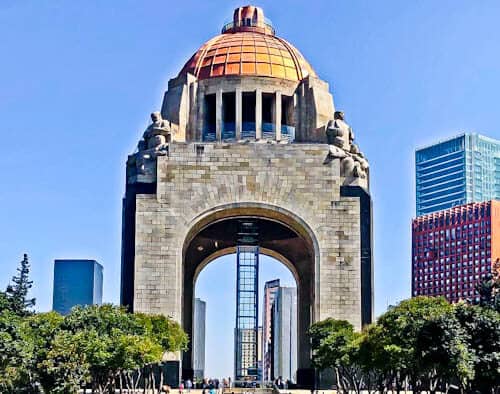 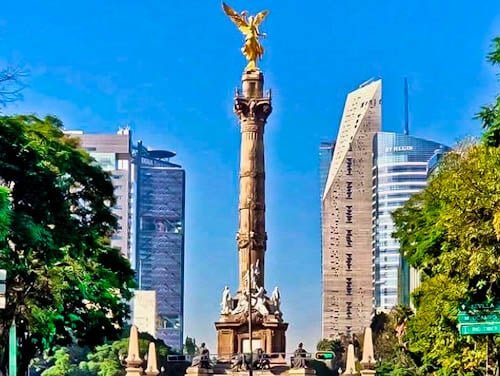 The Angel of Independence was built in 1910 to celebrate the first 100 years of Mexican Independence.  It has since become not just one of the Mexico City landmarks but also the iconic symbol of both the city and country.  An eternal flame shines in front of the monument to honor the heroes of Mexican independence.  Finally, you can climb the staircase to the top of the monument.  However, this is only possible on weekends and you need to organise it with authorities. 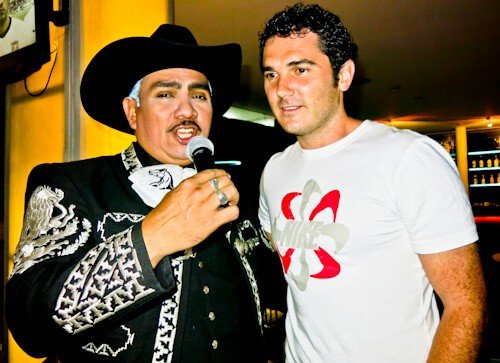 Mexico’s most famous export is probably the Mariachi.  In Mexico City there is a plaza called Garibaldi which is full of Mariachis.  You can sit in the plaza and enjoy a beer whilst watching the Mariachis singing.  The going rate for a song is about 100 pesos, but if you act disinterested, they’ll offer a cheaper price.   In addition, you’ll find the Mariachi Museum on the plaza which features a top floor bar with a panoramic plaza view.  This is a good place to enjoy a few beers (or margaritas) whilst watching live mariachis.  Finally, the top floor bar often features live performances by lookalikes of Mexico’s most famous mariachis. 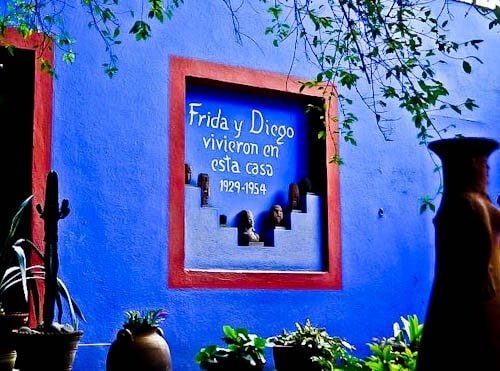 An extremely popular place to visit is the Frida Kahlo Museum.  As well as a museum it was actually the house where she lived from 1929 to 1954.  She was a famous Mexican artist as well as one of the most famous Mexicans.  To visit here you’ll require a metro journey and the General Anaya station is likely to be the most convenient. 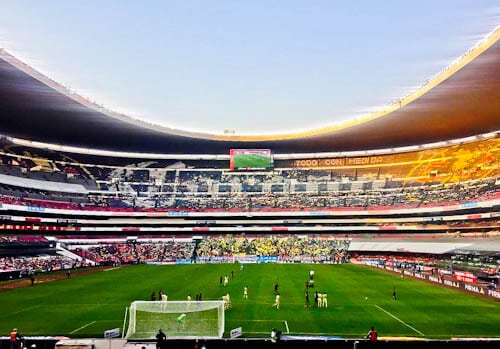 The iconic Azteca stadium is the largest stadium in Mexico.  It has a capacity of around 87,000 and is home to both the Mexico national team as well as Club America.  Additionally, it hosted the 1970 and 1986 World Cup finals.  Who remembers the Diego Maradona ‘Hand of God’ goal against England?  This happened in the Azteca Stadium.  Furthermore, over the years it has hosted many concerts.  In 1993 Michael Jackson performed 5 times here to over half a million fans.

Basilica of our Lady of Guadalupe 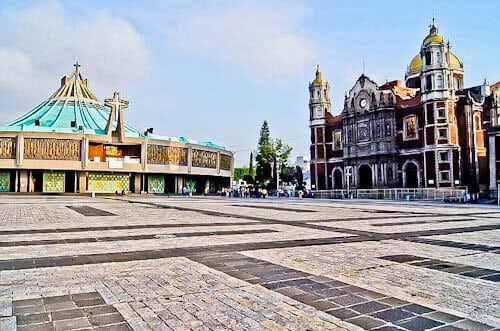 The Basilica of our Lady of Guadeloupe is the most important religious sight in Mexico.  Inside is a cloak containing the image of the virgin Mary.  Nearby is the location where the virgin Mary appeared in front of San Juan Diego.  For this reason, the cloak is often referred to as Diego’s Cloak.   At the site there is both an old and a new basilica.  The cloak is inside the new one.  Lastly, to get to the Basilica simply take the metro to La Villa – Basilica station. 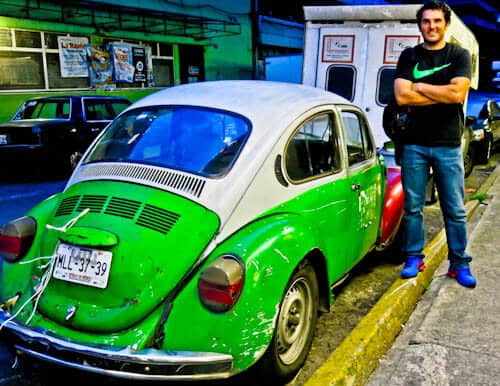 When I first saw Mexico City on the TV, there were lots of green and white beetle taxis on the streets.  Sadly, this iconic Mexican taxi color changed to red and gold.  Today, you’ll see pink and white taxis on the streets.  However, if like me, you remember the green and white taxis, there are a few of them abandoned around the city.  As you travel around the city keep your eyes peeled for this iconic piece of history. 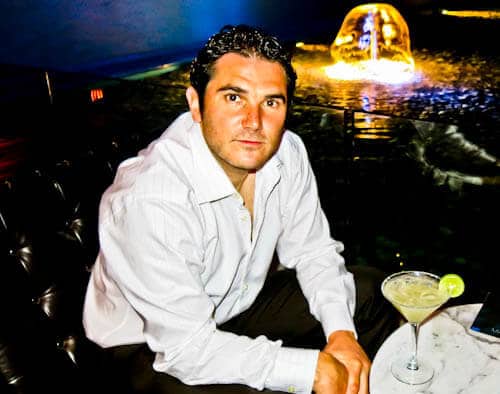 Have you seen the movie, The Matador with Pierce Brosnan?  If you have, I’m sure you remember him drinking margaritas in a bar.  Additionally, you’ll certainly remember the swimming pool scene.  These both occurred the Camino Real hotel in Polanco.  If you’re a fan of the movie, you’ll certainly enjoy this part of Mexico City. 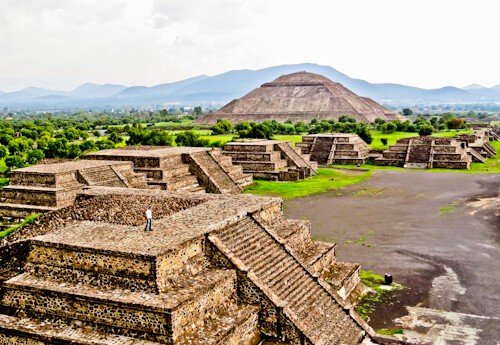 How to get to Teotihuacan from Mexico City

It’s possible to take a direct bus to Teotihuacan from Mexico City’s north bus station.  An easier and safer option would be to go on a prepaid tour which you can book online.  Finally, if you’re interested going, I have a more detailed blog about a day trip to Teotihuacan.

How to get from Mexico City to Ciudad Juarez / El Paso 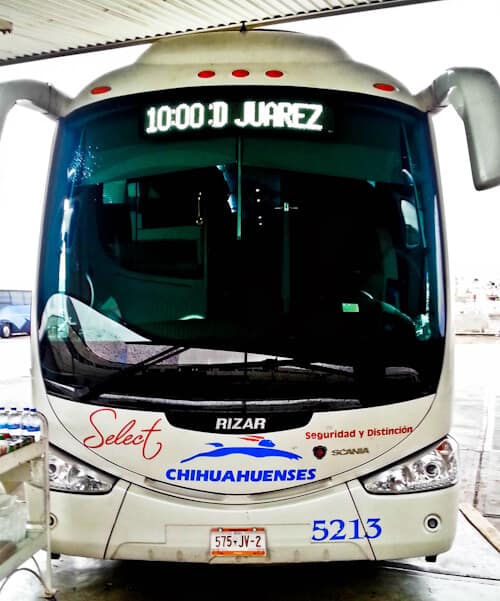 The overnight bus from Mexico City to Ciudad Juarez is surprisingly luxurious.  In addition, each seat has a private entertainment system as well as lots of legroom.  I only recommend taking the bus to the USA if you have a rule of only traveling by land like I do.  At 1821 pesos, a flight would be the same price, if not cheaper!