Mostar Sniper Tower – How to Enter and Explore the Interior 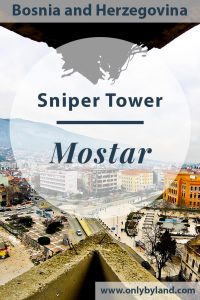 Mostar Sniper Tower – How to enter and what to see

A major player in the Siege of Mostar was the Mostar Sniper Tower.  Reasons to enter the sniper tower include.

I was staying in Hotel Kapetanovina which offers 24 hour balcony views of the UNESCO Stari Most bridge.  From this location I was able to walk to the Sniper Tower.  It’s a safe walk today but would have been madness in the early 90’s. 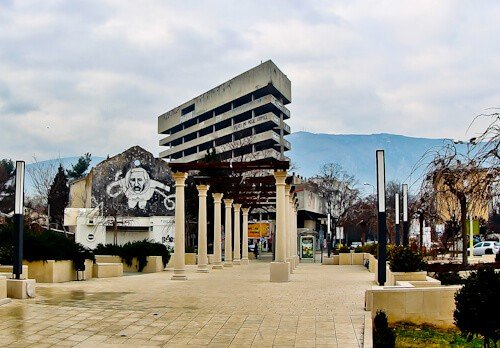 What is today known as Sniper Tower was a once a prosperous Yugoslav bank.  For this reason it has an excellent location in the center of Mostar.  In fact it’s just west of the center, meaning it falls into the Croatian side of Mostar.  This location, as well as the height of the building made the tower perfect to defend the Croatian side of Mostar during the Siege of Mostar.  In addition, it was also used as a sniper tower during the initial Siege of Mostar, when Bosnia and Herzegovina declared independence from the former Yugoslavia.

As a foreigner it’s very difficult to understand who was fighting who in Mostar.  To demonstrate, there were several armies fighting during the siege of Mostar.  At the beginning of the war, Mostar was part of Yugoslavia and as a result the Yugoslav army were there.  The Yugoslav army battled with the unofficial armies of Croats and Bosniaks.  Once Bosnia and Herzegovina became a country it was the Bosniaks and Croats who then fought each other.  To clarify Croats are Bosnian Croats and Bosniaks are Bosnians who follow Islam.  The reason Bosniaks follow Islam dates back to the Ottoman Empire and is the influence of Turkey during this period.

The initial siege of Mostar took place in 1992 when Bosnia and Herzegovina declared independence from Yugoslavia.  Both the newly formed Croat and Bosnian armies fought together to oust the Yugoslav army.  It’s worth noting that the Yugoslav army was the only official army during this initial war.  However, they were ousted and as a result the creation of Bosnia and Herzegovina was confirmed.  The initial siege took about 1 month.  Mostar suffered a lot of damage, loss of life and thousands of refugees left.

A year after the Yugoslav army had left Mostar, fighting broke out again, this time between the Bosnian and Croatian armies.  Essentially this was a civil war between Croats and Bosniaks.  It’s believed the intention was for Croatia to annex this part of Bosnia.  After a year of fighting, with the help of Bill Clinton, peace was agreed and the Washington Agreement signed.  Many situations and disagreements remain unresolved, for this reason several besieged buildings still stand in Mostar. 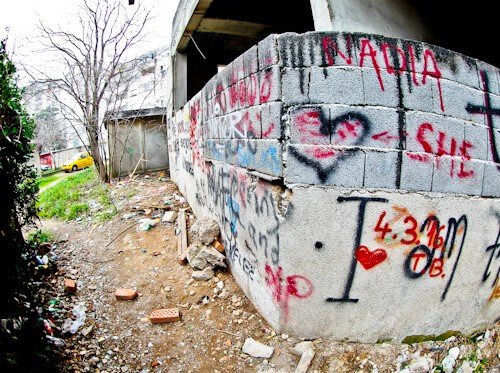 It’s not officially permitted to enter the sniper tower, however a makeshift entrance has been put into place.  I found out about this entrance because 3 locals were exiting as I was photographing the exterior.  First of all I saw them descending the staircase and I followed them to see how they left the structure.  To enter you must climb the stones and there is a step midway up the wall.  In addition, on the other side of the wall there is a higher pile of rocks to climb, which means leaving is much easier.

Walk to the Staircase 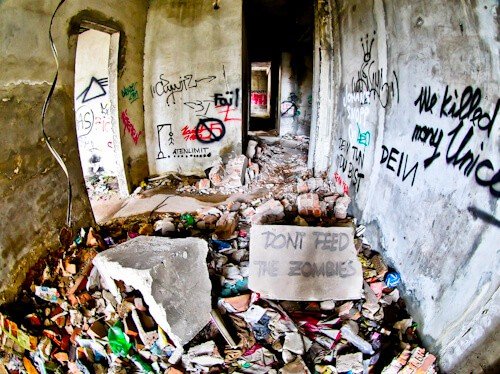 Once inside you’ll notice lots of garbage as well as graffiti and street art.  However there is a clear path through the ground floor which leads to the staircase.  When you enter it’s likely you’ll experience a strange feeling, death and this building go hand in hand.  I would therefore not recommend entering at night unless of course you wanted to make some eerie night photography! 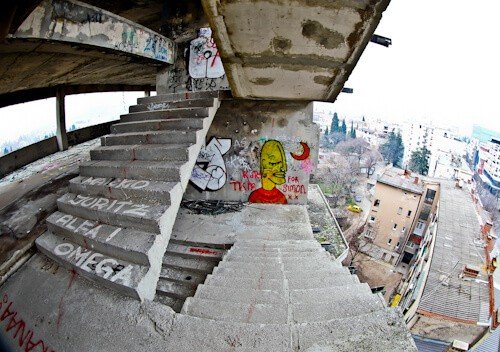 It’s impossible to imagine how many shots have been fired in and out of this building.  As a result of this, the staircase is open which means you must be careful when ascending and descending.  One wrong step and you could literally fall 7 floors! 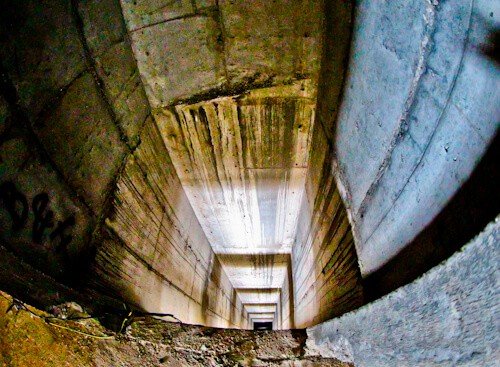 Another health and safety risk in the Mostar Sniper Tower is the elevator shaft.  It’s an open elevator shaft, the working elevators which served the bank are long gone.  I don’t recommend getting too close to the edge.  Furthermore I expect it was strategic that these elevator shafts were blown out.  The snipers on the top floor would not have welcomed any company from the enemy.

If you’re a street art fan then it’s worth exploring every floor of the tower.  Each floor has a different example of street art.  As this building is linked with war and death, a lot of the street art has this theme.  In addition there’s quite a lot of graffiti text with philosophical points of view about war. 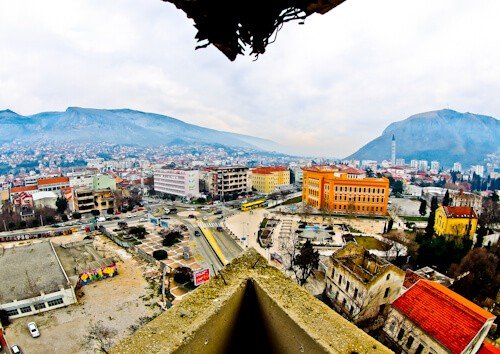 The Mostar Sniper Tower played a huge part in the siege of Mostar and could in fact have been where the whole war escalated from.  Still today, some of the surrounding buildings are covered in bullet holes.  As the situation has not been fully resolved these destroyed buildings still stand today.  In fact the sniper tower stands at the entrance to the Croatian side of Mostar.  The viewpoint from the tower is East Mostar, home of the Bosniak population of the city.  Although the war has ended, the city is still divided.  One example of this, is the football team HSK Zrinjski Mostar, a Croatian football team playing at the stadium which was built for to FK Velez.  FK Velez had to move out as they were no longer welcome in the Croatian side of Mostar.

One things for certain, all over the sniper tower as well as several surrounding buildings will be splattered with bullet holes.  In fact, it would be impossible to walk through Mostar without seeing a building covered in bullet holes.  Imagine being hungry and having to dodge sniper bullets to find some food.  Mostar has experienced an awful recent past and you will see it.

Be safe on your visit to the Mostar Sniper Tower!

Be sure to take cake whilst entering the tower, as well as exploring it.  It’s an eerie experience and it’s hard to believe the gravity of events which unfolded here.  Could one pop shot from the Mostar Sniper Tower have started the Siege of Mostar?  It’s very likely.

Take a stadium tour of HSK Zrinjski in Mostar.