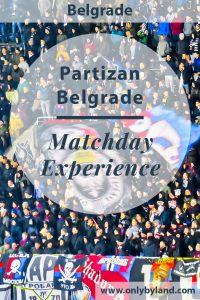 Partizan Belgrade are multiple Serbia SuperLiga champions.  Additionally, they’re one of the big four teams of the former Yugoslavia.  Reasons to watch a football match in the Partizan Stadium, Belgrade include;

I was staying at the Belgrade Inn in the center of old town Belgrade.  I could either walk to the stadium or take the trolley bus. 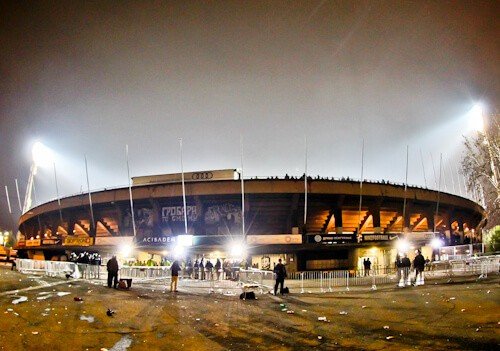 Partizan stadium is located in the south of Belgrade.  In fact it’s a 40 minute walk from the center of old town Belgrade.  Alternatively, you can take a trolley bus or taxi.  Trolley bus #41 leaves from Republic Square and passes by Partizan Stadium.

How to buy a ticket for a Partizan Belgrade Game 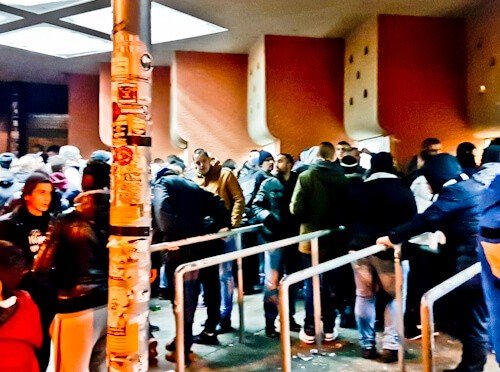 If you’re buying a ticket for a Serbian SuperLiga match you can turn up whenever you want and buy a ticket.  However, if you’re buying a ticket for a Europa League fixture or a Red Star Belgrade derby, I recommend arriving 3 hours early.  The reason to arrive early is that the lines are not as long.  If you arrive 1-2 hours early to buy your ticket, you may have a frustrating wait ahead.  Furthermore, I recommend queuing in a central line.  Drunk hooligans tend to push in on the outer lines.  Not only do they push in but they buy several tickets for their hooligan friends.  In fact, if you have time, investigate how to buy a match ticket in advance.  The ticket office is located a short walk east of the stadium. 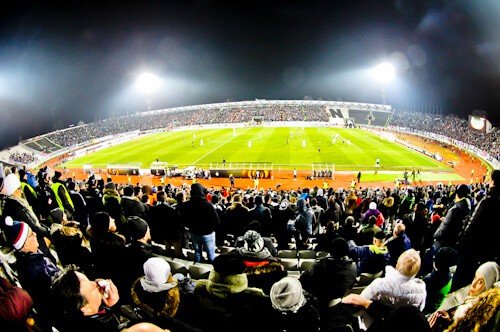 Partizan Stadium has a capacity of almost 34,000 spectators.  Furthermore, it’s likely to be full during Europa League matches.  In contrast, during Serbia SuperLiga matches it’s likely to be much quieter with the exception of the Belgrade derby.  The stadium was built after World War II by the Yugoslav army.  In 1962, the European Athletics Championships were held here and legendary Yugoslavian leader, Josip Broz Tito was in attendance.  Today, the stadium is of exclusive use for the Partizan Belgrade team, although the Serbia national team often play here.  Additionally, the historic Yugoslavian national team have also played here.  Metallica and AC/DC have also performed concerts in the stadium. 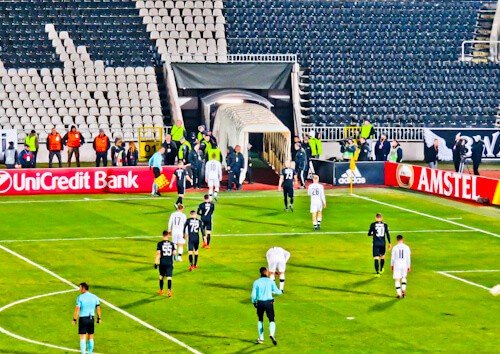 Part of the excitement of watching a live game is when the teams walk out to Serbian music.  The home fans will be cheering as their team line up is announced.  Of course, they will boo at the away team.  If it’s a local derby with Red Star Belgrade, or a Europa League game with Croatian opposition, the home fans may get a little aggressive towards them.  For this reason, I don’t recommend buying the cheapest tickets, you’ll be stood with the hooligans!  However, part of the fun of a matchday experience is watching the ultra home fans. 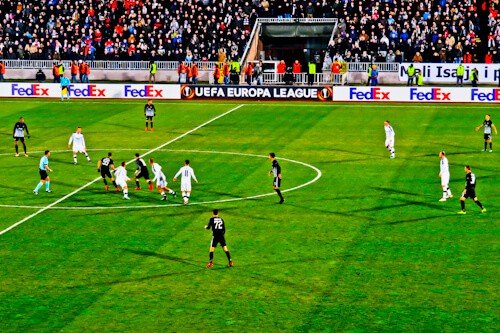 When I visited, Partizan Belgrade were playing in the Europa League 2nd round against Viktoria Plzen from the Czech Republic.  They drew 1-1 but went on to lose 2-0 in Plzen.  As a result, they were eliminated from the competition.  They have hosted several of Europe’s most famous teams recently.  Newcastle United under Bobby Robson have played here.  Furthermore, Jose Mourinho visited the Partizan Stadium with Porto when they went on to win the Champions League.  The biggest match to be played here was in the 2003 Champions League.  Real Madrid drew 0-0 with Partizan Belgrade, they could not score even with their team of superstars including, Zinedine Zidane, David Beckham, Cristiano Ronaldo, Roberto Carlos and Luis Figo!

How to get to the Partizan Stadium 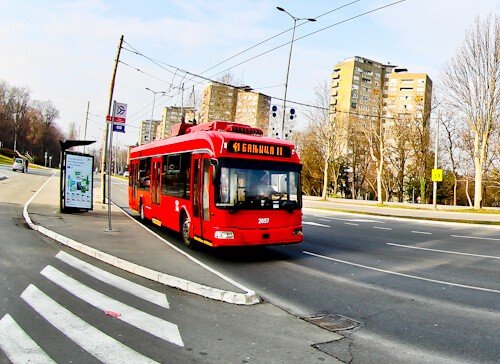 To get to Partizan Stadium from old town Belgrade is very easy.  Of course, you could walk which takes around 40 minutes.  An advantage of walking is that you’ll see several points of interest of Belgrade.  Not to mention, you’ll do some exercise.  Alternatively, you can take trolleybus 41 which leaves from Republic Square and passes by Partizan stadium.  The easiest way would be to take a taxi which are very cheap in Serbia.

I recommend you take the trolleybus to the stadium but don’t be afraid to walk.  Most importantly, during popular matches avoid the hooligans.  Choose a seat that’s not behind the goalmouth, consequently you’ll be in the calmer area of the stadium.  Furthermore, don’t take any coins into the stadium as they will be confiscated.  Enjoy your Partizan Belgrade matchday experience!

Take a stadium tour of the historic Yugoslav rivals of Partizan Belgrade, Red Star Belgrade as well as Hajduk Split.