If you’re walking the Pennine Way from South to North, you’ll have just experienced the most beautiful day on the whole journey.  Maybe you found a good spot to wild camp on High Cup Nick?  Alternatively, you may have camped or stayed at a B&B in Dufton.  The next stage is the 20 mile walk from Dufton to Alston which crosses the highest point on the Pennine Way, Cross Fell.  What’s more, you’ll also reach the summits of the second and third highest peaks in the Pennines, Great Dun Fell and Little Dun Fell. 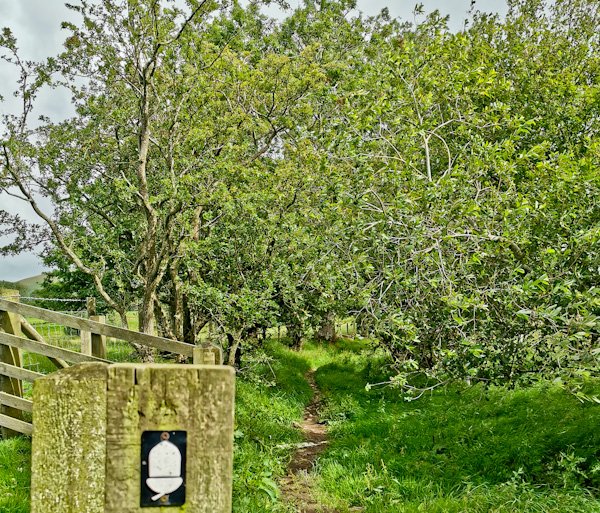 I checked the weather before I set off which was dry and sunny for both Dufton and Alston.  Additionally, I checked the Cross Fell weather forecast which stated 45 mile winds and rain.  Surely this couldn’t be right?  Read on for my Dufton to Alston Pennine Way experience in 2020. 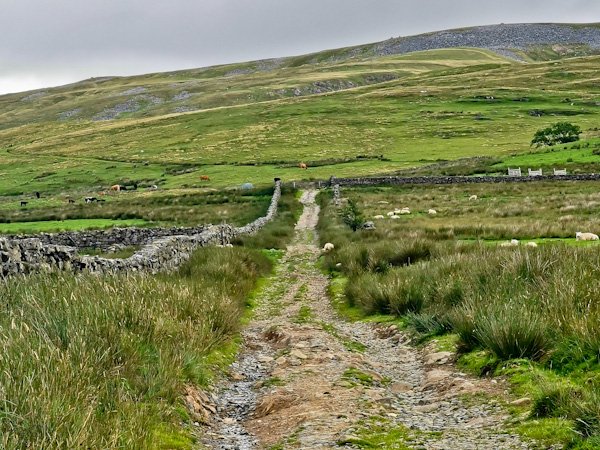 When you leave Dufton, you’ll go through farmland as well as woodland areas.  However, it won’t take long until you reach the initial ascent to Great Dun Fell.  Great Dun Fell?  That’s right, first you will ascend to the top of the second highest point in the Pennines.  On the summit of Great Dun Fell is a Radar Station.  You’ll see it long before you reach it. 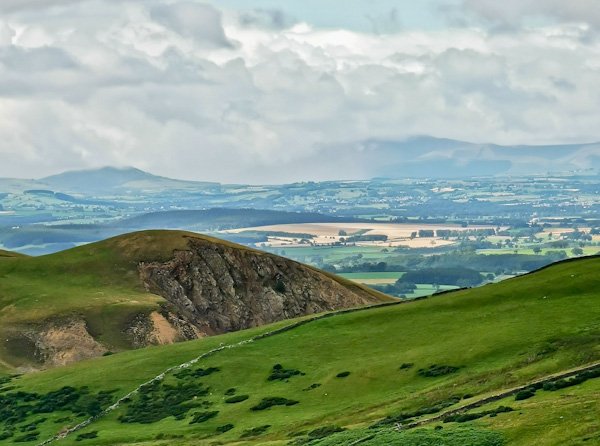 As you ascend to the Great Dun Fell summit there are stunning views of the Lake District over to the west.  Weather permitting of course!  As a matter of fact, I was able to see rain clouds heading into the Pennines which cause a different weather system up here. 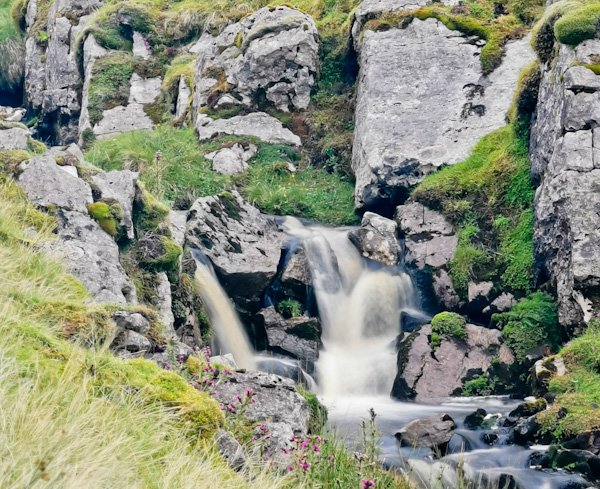 As you get higher towards the Great Dun Fell summit you’ll pass a few small waterfalls.  More importantly, there’s a nice sheltered area next to a bridge which is a good place to sit down and eat before you head higher where you’re exposed to wind. 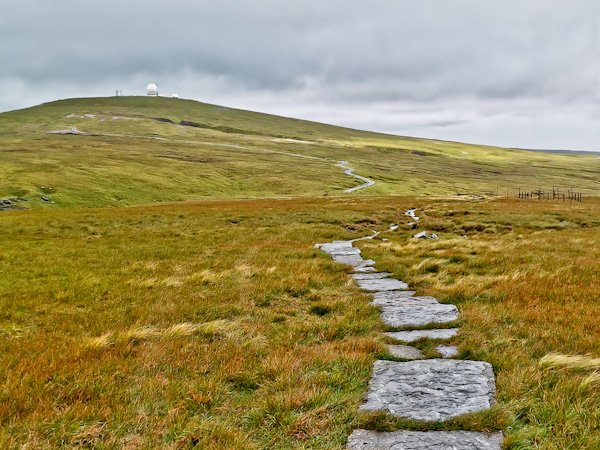 There is a paved path to the Great Dun Fell summit.  This takes away the problem of bogs.  However, there are parts of the path which the bogs are starting to swallow up.  For this reason, you may need to skip around bogs at some point.  What’s more, it’s at this point where you will be hit by high winds and rain.  Well, I was hit by high winds and rain but you may have wonderful Lake District and moorland views. 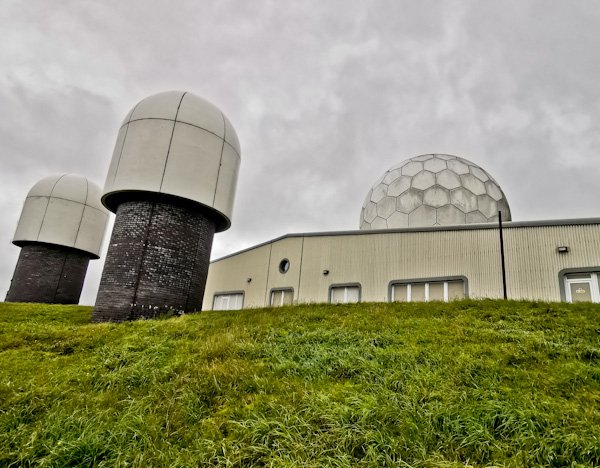 At a height of 848 meters, the Radar Station is located on the summit of Great Dun Fell.  For Pennine Way walkers, the building offers a good shelter from the wind.  Of course, you cannot go inside. 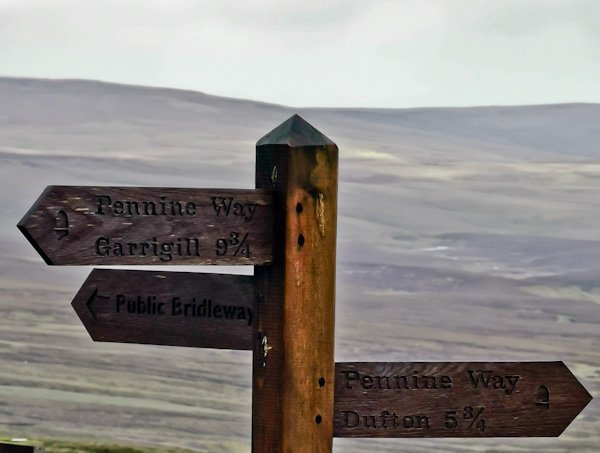 When you reach the Great Dun Fell summit, you’ll have walked around 6 uphill miles from Dufton.  Next up are Little Dun Fell followed by Cross Fell before a long moorland walk to Garrigill and Alston. 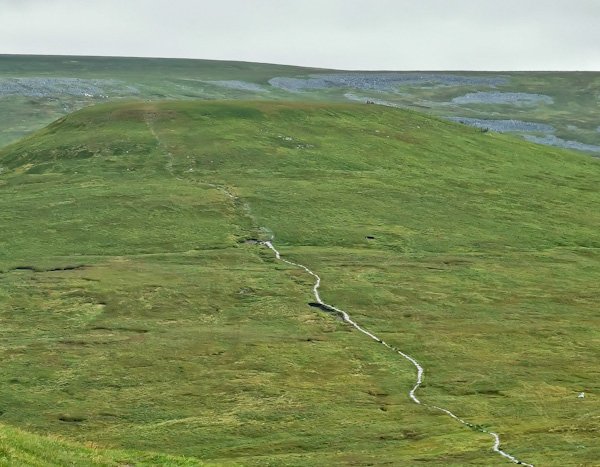 Little Dun Fell is the third highest peak on the Pennine Way.  It’s a long downhill from Great Dun Fell, followed by another steep incline.  Fortunately, there is a paved path although some parts are being swallowed by bogs.  However, you’re incredibly exposed to the winds as you cross these three peaks.  A problem I had was the velcro on my poncho was blown apart.  As a result, my poncho was only being held on by my neck and not doing it’s job of keeping my bag dry.  Fortunately the rain was not too strong so my bag was ok.  If you’re caught in strong rain and winds up here a poncho with more than velcro sides is required to keep your bag dry. 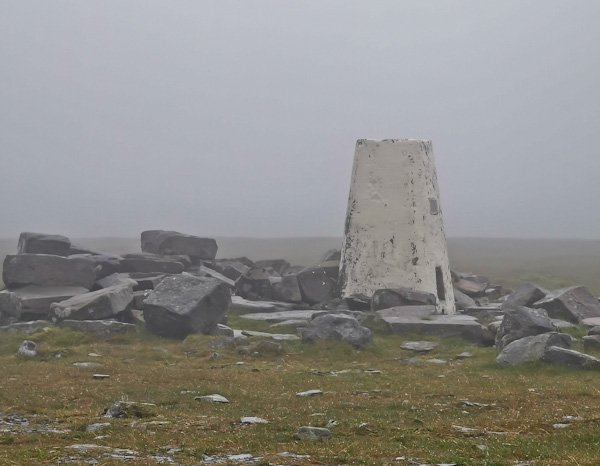 Cross Fell is the highest point on the Pennine Way.  It’s also the 11th highest mountain in England at 893 meters.  When I reached the summit there was a 45 mph wind and intermittent rain.  In fact, I was in the clouds the whole time so didn’t see much at all.  For the latest weather, check here which was accurate for the day I visited.  There’s a trig point at the top as well as a sheltered area which help keep you on track at the summit.  Finally, although I was there in Summer, it was very cold at the summit made worse by wet weather – don’t be caught out.

On a clear day you can see the Lake District, West Coast, East Coast and also the Cheviots.  Cross Fell is the source of the Tees River which the Pennine Way follows from Middleton in Teesdale.  Cross Fell used to be know as Fiends Fell and is associated with demons.  It’s believed the howling winds brought about the demon connection.  Finally, it’s not uncommon for the winds to reach 100mph.  One of the four Pennine Way bothy’s is located near the Cross Fell Summit (Greg’s Hut Mountain Bothy). 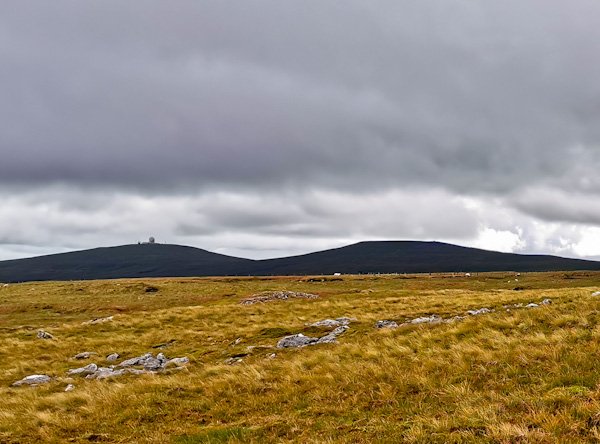 As soon as I descended from Cross Fell, the wind and howling stopped, as did the rain.  It was as if I had escaped!  I passed Greg’s Hut Mountain Bothy and had one last look at at the 3 highest peaks in the Pennines.  They stood there dark, clearly experiencing a different climate to the rest of the world. 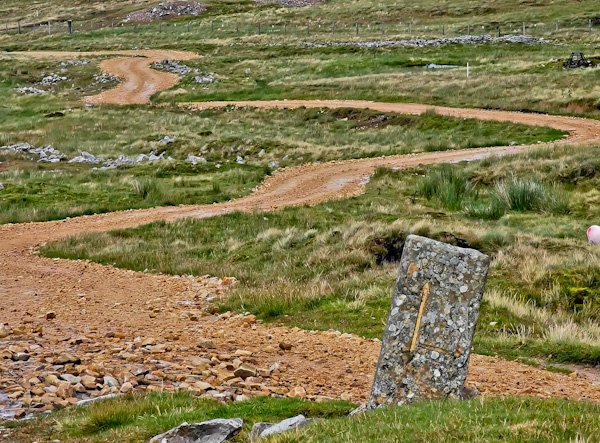 The Pennine Way route from Cross Fell to Garrigill is around 8 miles.  There is a clear track which is both good and bad.  It’s good because it’s easy to find your way.  However, it’s bad on your feet with 8 miles of your feet pounding hard ground.  You’ll certainly want to jump onto the grass where possible.

Wildlife on the Moors 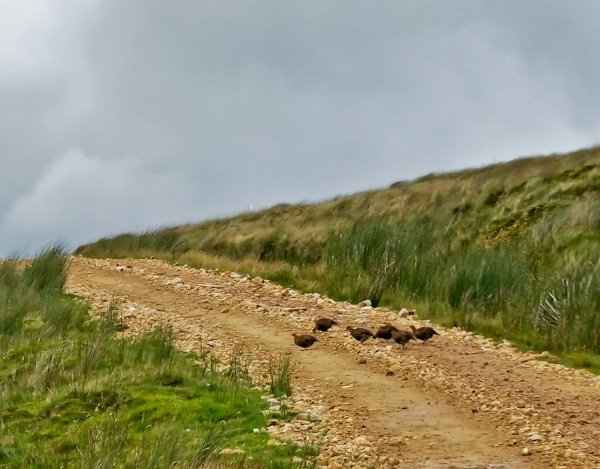 I was passing through the moorland in Summer therefore it was relatively quiet for wildlife.  However, there were several red grouse which were surprized to see a Pennine Way walker. 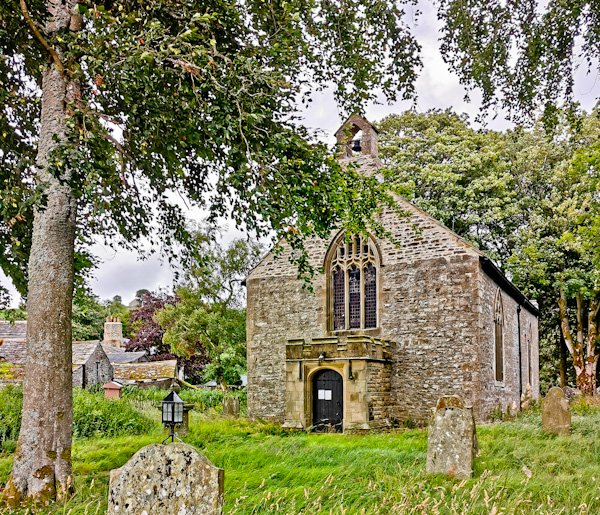 Garrigill will be your first sign of life since Dufton over 15 miles away.  However, there are no real food shops here.  You will find accommodation and campsites but I recommend you continue onto Alston.  In Alston there are supermarkets, pubs, restaurants as well as good value accommodations which should motivate you to continue another 4 miles. 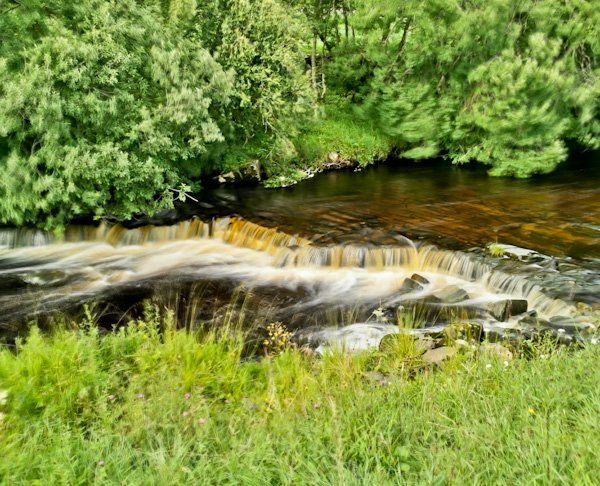 The beautiful Pennine Way route from Garrigill to Alston follows the River South Tyne.  As a result, it’s much more tranquil than the 3 highest peaks of the Pennines which you crossed earlier in the day. 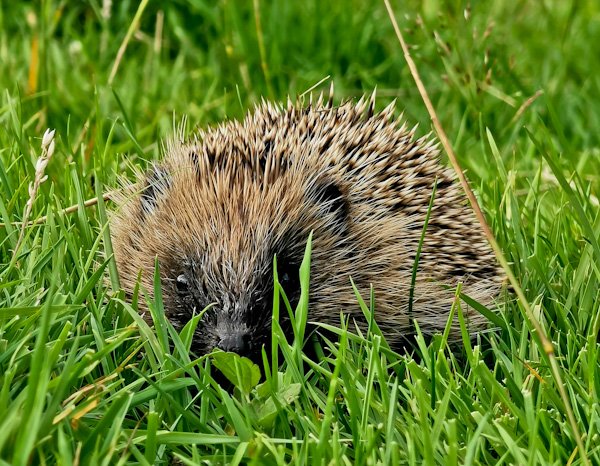 During my last mile of the Dufton to Alston Pennine Way route I saw a hedgehog on the path.  He posed for a few pictures before I continued to Alston.  A hedgehog sighting was a good reward for completing the hardest stage of the Pennine Way. 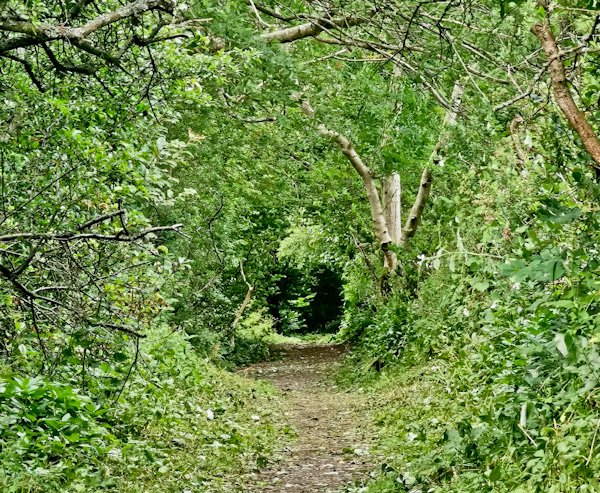 The Pennine Way going into Alston is like something from a fairy-tale. 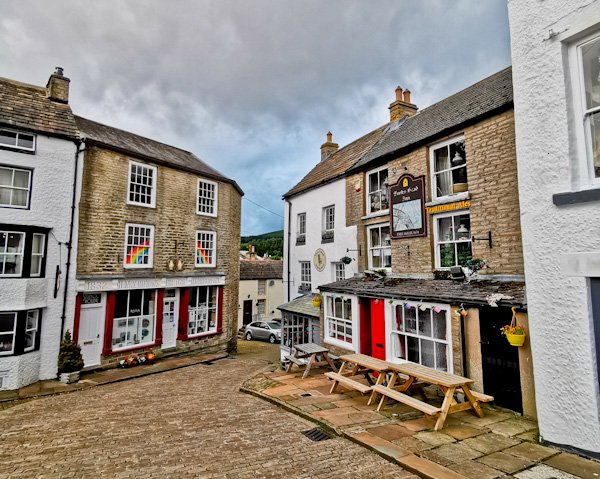 Alston is one of the best stops on the Pennine Way.  Not only is it a picturesque village but it also has plenty of amenities.  There are good value hotels, B&Bs, youth hostels and campsites.  In addition, there are restaurants, pubs, takeaways, supermarkets and chemists.  If you’re in need of a rest day I recommend Alston as your stop.

Pray for clear weather and no winds as you pass over Cross Fell.  The views must be incredible on a clear day.  More importantly, prepare for high winds, cold and rain (even in the Summer) as it’s incredibly unpredictable over the three summits.  What’s more, if you’re doing the whole Pennine Way route you can’t wait for a good day at the summit!  Enjoy.