What to See in Ponte de Lima Portugal + Photography

Ponte de Lima is one of the most picturesque Portuguese towns.  Here are a few things to do in Ponte de Lima Portugal;

Often referred to as the oldest town in Portugal, Ponte de Lima is a must see.  Moreover, hotels are excellent value therefore an overnight stay is easy to organise. 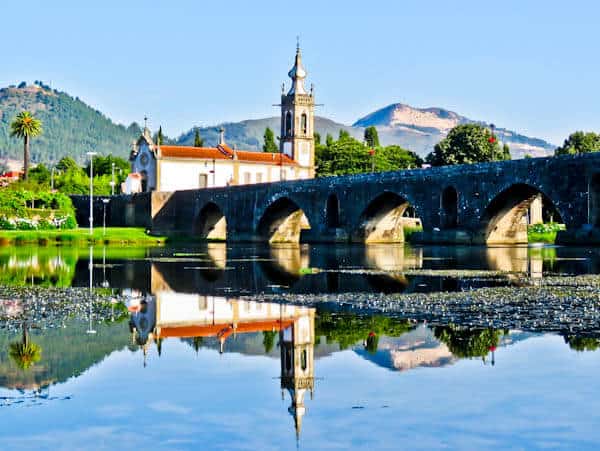 Firstly, Ponte de Lima is the oldest village in Portugal.  This may gain your interest, but the beautiful bridge which it’s named after should definitely gain your interest.  As its beauty changes at different times throughout the day, I recommend you stay at least one night in Ponte de Lima Portugal.  Which church can you see at the end of the bridge?  This is the Santo Antonio Church and you’re welcome to go inside and explore the interior. 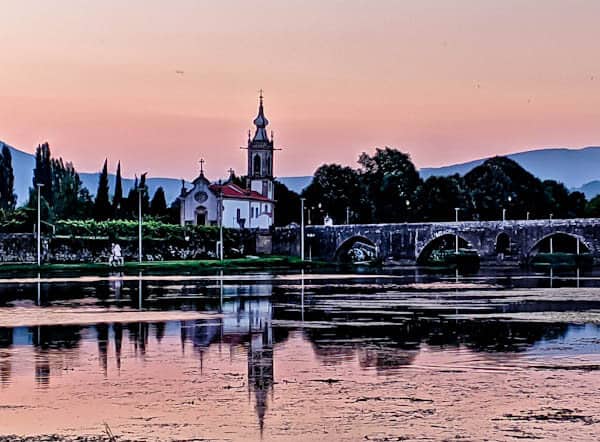 The sun sets at the opposite side of the bridge.  For this reason, the background often turns pink which also reflects in the river. 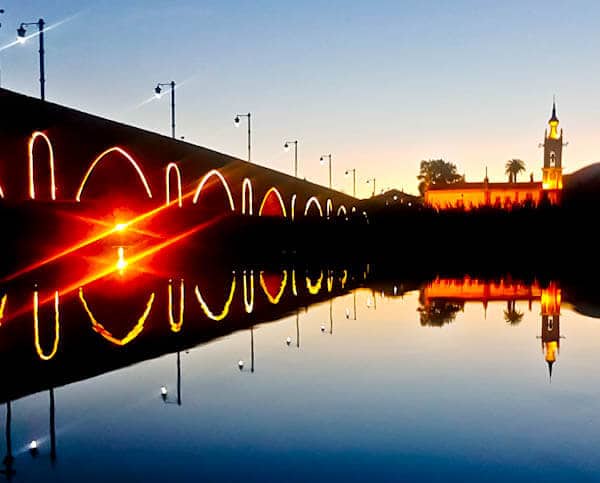 The bridge is lit up beautifully at night.  In addition, the Lima River is often calmer.  As a result, you can make some wonderful night photography here. 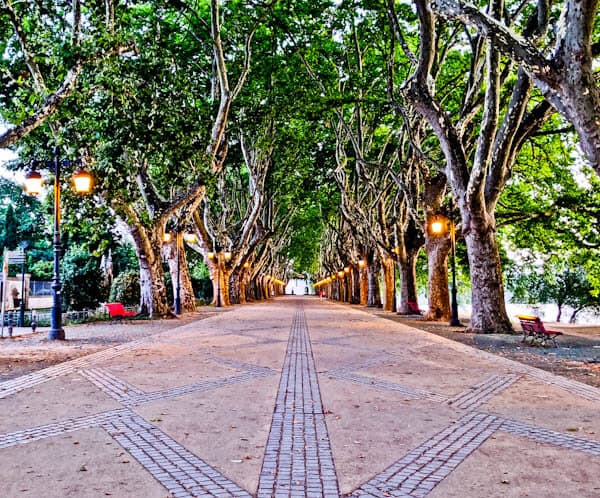 Avenida dos Platanos is a picture perfect walk sheltered by almost symmetrical trees.  As a matter of fact, those on the Camino Portuguese will enter Ponte de Lima on this route.  Personally, this part of the walk persuaded me to stay in Ponte de Lima overnight instead of just passing through.

Bird Watching in the River Lima 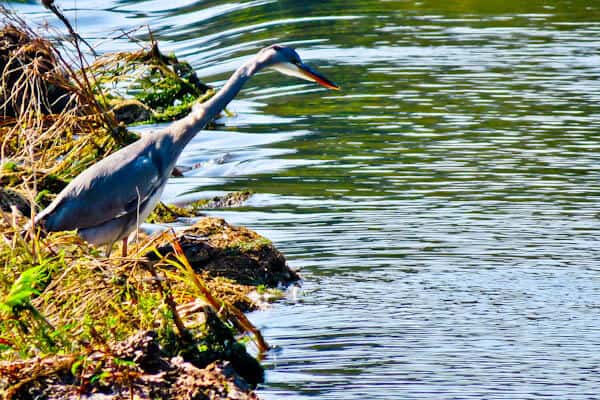 Keep your eyes open for birds as you stroll alongside the River Lima.  There’s actually a small waterfall adjacent to Avenida dos Platanos which is a good spot to watch from. 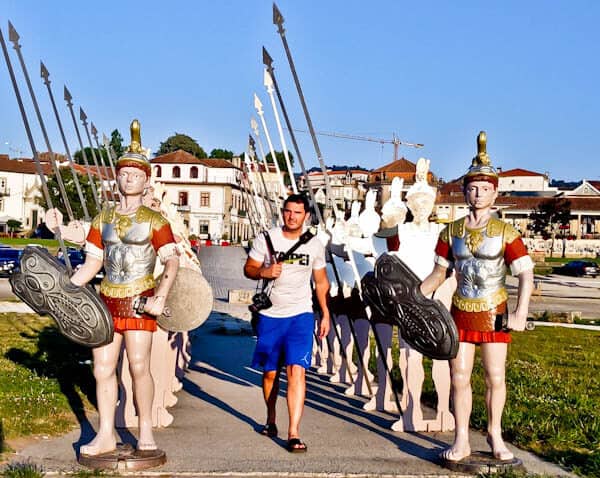 Ponte de Lima was an important Roman settlement due to its position between Braga and Santiago de Compostela.  As a memory of this era, Roman soldiers are displayed either side of the River Lima.  As well as the bridge, this is a top Instagram spot in Ponte de Lima 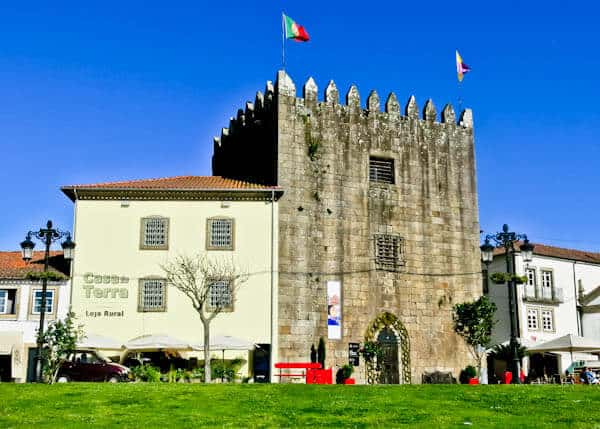 The area in between the Old Prison Tower and Sao Paulo Tower are what remains of the city walls.  Sao Paulo Tower is the one which features azulejo decorations.  As the name suggests, the Old Prison Tower served as a prison in the 16th century.  Today however, it’s a tourist office therefore don’t be afraid to enter.  In addition to these walls, you’ll also see other wall remnants scattered around as you explore Ponte de Lima. 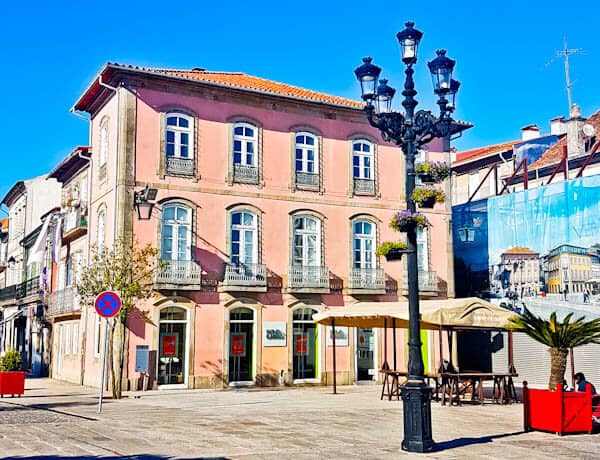 Largo de Camoes is the central square of Ponte de Lima.  It’s surrounded by colorful Portuguese buildings with the majority of them cafes.  The center of the square features a fountain. 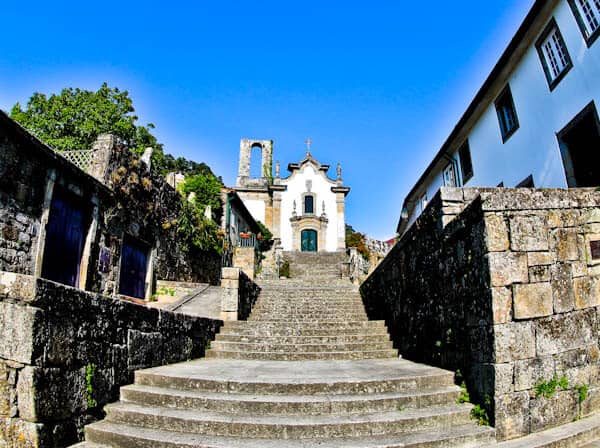 The Chapel of Pereiras is a classic example of a Portuguese chapel with a long staircase leading up to it.  It dates back to the 16th century.  Lastly, there are some impressive azulejos at the bottom of the stairs. 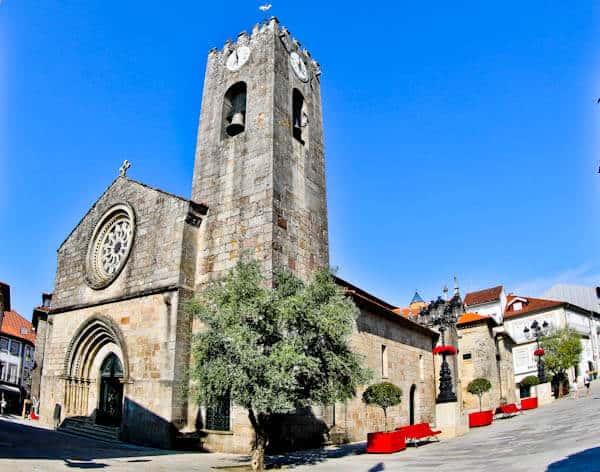 The main church of Ponte de Lima is of Romanesque, Baroque as well as Neoclassical architectural style.  Furthermore, it features a clock tower which towers over the city.  Finally, opposite the church is a statue of a running bull. 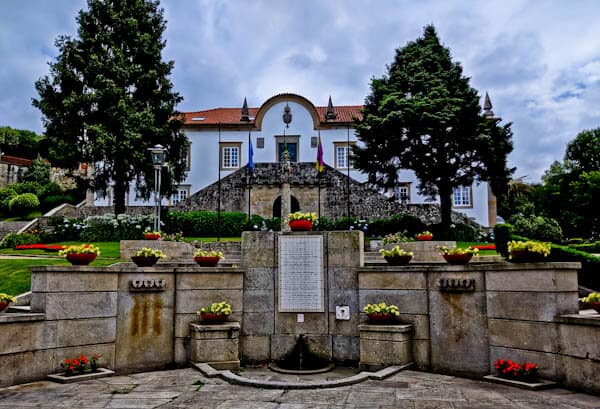 You’ll see lots of Baroque manor houses as you discover Ponte de Lima and the surrounding region.  If you wish to stay in a Baroque Manor you should check out the Hotel Paco de Vitorino on the outskirts of the city. 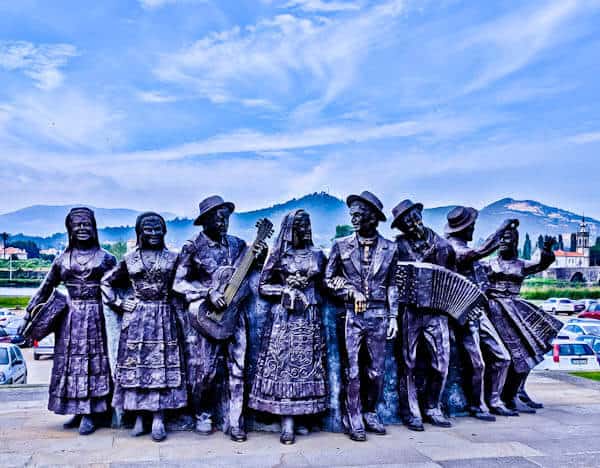 There are several statues displayed throughout the town.  Some are monuments to folklore and fiestas (above).  Other statues represent people from the farm, religious and political figures as well as famous poets.  In my opinion, Ponte de Lima is on a par with Bratislava, Slovakia for its cultural statues. 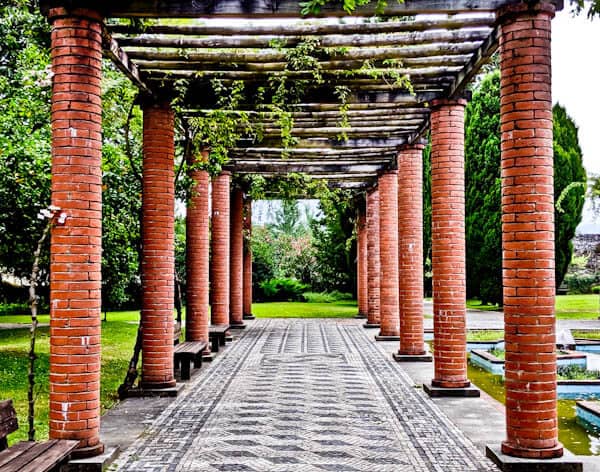 Ponte de Lima is a town famous for gardens.  The most popular is Arnado Park which is open daily from 10am to 6pm.  Additionally, it also hosts an international garden festival from June to October. 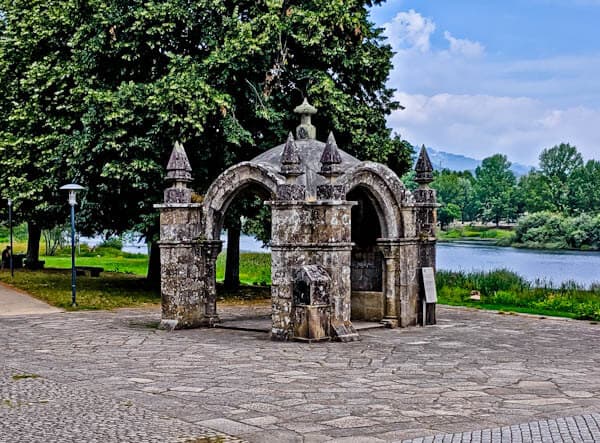 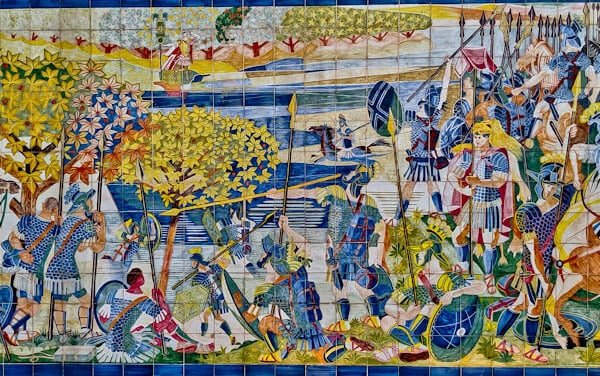 As I mentioned, Ponte de Lima is the oldest town in Portugal.  For this reason, it’s full of excellent examples of azulejos.  As a matter of fact, there’s also a huge color azulejo mural on display. 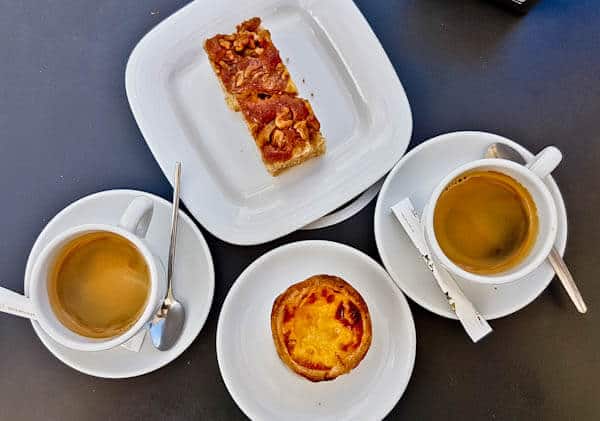 Do visit a bakery and do enjoy a Portuguese custard tart.  In addition, you must check out the other cakes on offer as I’m sure there are others which you’ll enjoy.  Another interesting food available in Ponte de Lima is the Francesinha.  The Francesinha could be described as cholesterol on a plate and is the famous dish of Porto. 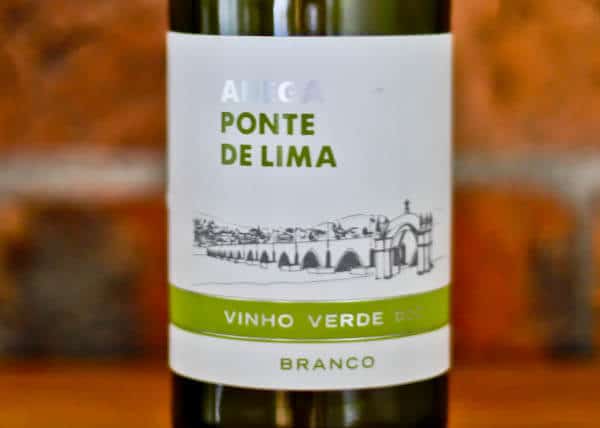 Be sure to order a bottle of local Ponte de Lima wine to accompany your evening meal.  If you like it, it’s available for sale throughout the town and excellent value. 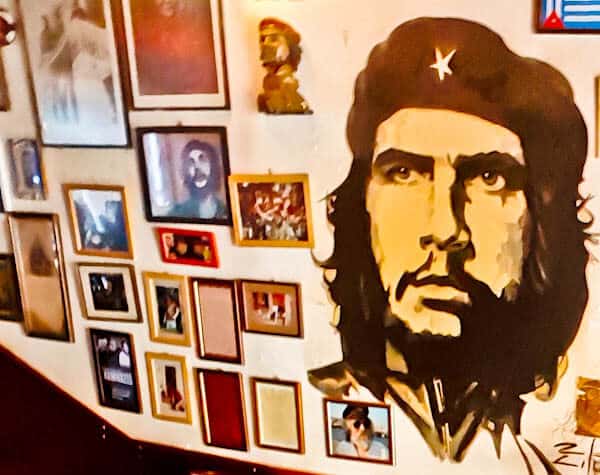 A bar worth mentioning is the Che Guevara bar.  It’s founder even has his mural painted behind the bar in typical Cuban style.  As well as this, there are hundreds of Cuban souvenirs on display.  Finally, with the Cuban music, you’d be forgiven if you thought you were in Havana! 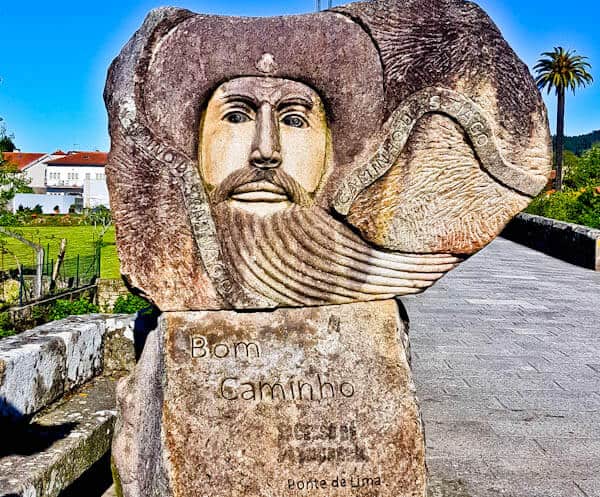 Ponte de Lima is home to arguably the most beautiful part of the Camino de Santiago, Portuguese Way.  Not only does it pass through the Avenida dos Platanos but it also crosses the Medieval Bridge over the River Lima.  A popular photograph spot for pilgrims is adjacent to the Santiago stone at the end of the bridge.

Not only is Ponte de Lima a beautiful town, it also receives very few tourists.  As a result, it’s one of the best places to visit in portugal.  Enjoy!

Read about other small Portuguese towns, Tavira, Tomar and Sintra.