Principality Stadium Cardiff – What do you see on a Tour?

The stadium is in central Cardiff therefore I recommend any city center hotel.  Alternatively, if you’re arriving by train, it’s a 5 minute walk from Cardiff Central station.  Stadium tours run most days, however, I recommend you check the schedule and book online in advance. 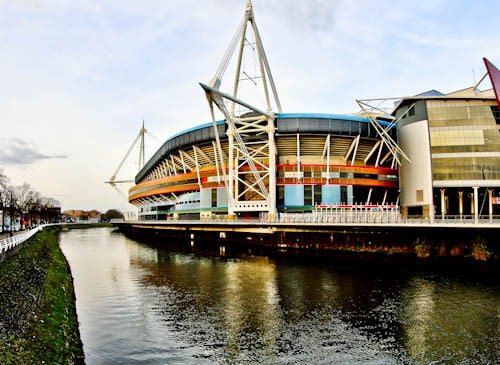 The Principality stadium is adjacent to the River Taff in central Cardiff.  It’s one of the few UK stadiums which offer a city center location.  As a matter of fact it’s a short walk from both Cardiff Central train station as well as Cardiff bus station.  For this reason, it’s incredibly easy to get to the stadium. 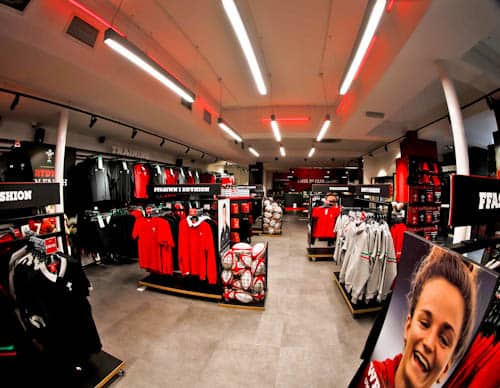 The meeting point for the stadium tour is upstairs in the Welsh Rugby Union Store.  You should arrive at least 10 minutes in advance of your tour time.  However, don’t be worried about arriving too early as you’ll have time to explore the Welsh Rugby merchandise.  Even if you’re not a rugby fan, some of the merchandise will make a good souvenir of your trip to Cardiff, Wales.  How about buying something to wear on your stadium tour?  As a result, you could enhance the pictures you take inside the stadium. 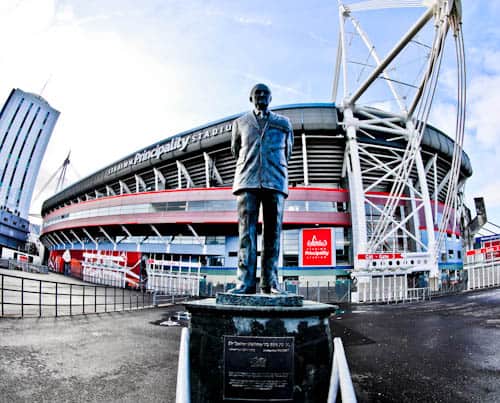 The first stop on the stadium tour is the Sir Tasker Watkins statue.  Sir Tasker Watkins was a war hero and later in life he became the second longest serving president of Welsh Rugby.  He oversaw the project to build what was originally known as the Millennium Stadium. 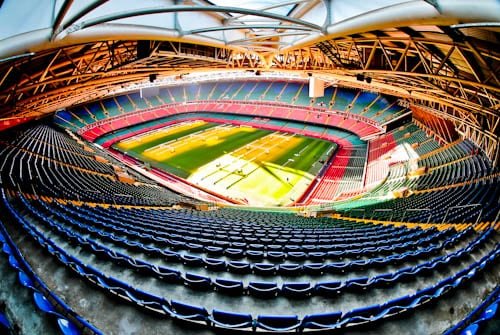 The Principality Stadium is the largest stadium in Wales and the fourth largest in the UK.  Only Wembley, Twickenham and Old Trafford are larger.  The capacity is 74,500 spectators.  An interesting fact is when the roof is closed it’s the largest covered stadium in Europe.  In addition, it’s the second largest covered stadium in the world after the AT&T Stadium in Texas.  Not only does the stadium host rugby but also concerts, boxing, motorsport, cricket as well as football.  Finally, 2 significant events held in the stadium include the 1999 Rugby World Cup final and the 2017 Champions League Final. 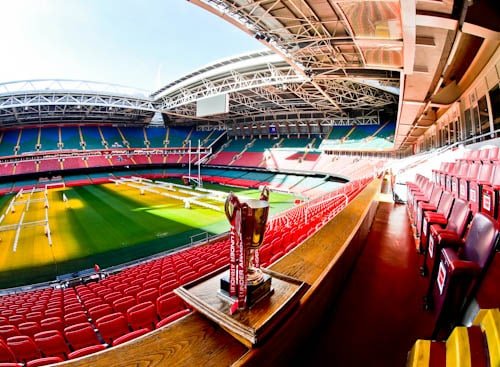 Royalty and VIPs sit in the President’s Box during important events.  Queen Elizabeth II has sat in the presidential suite and you can sit where she sat.  Additionally, the Prince of Wales (Charles) has visited many times.  Lastly, if sitting in the royal seats is not your thing, you can pose for pictures with the trophy. 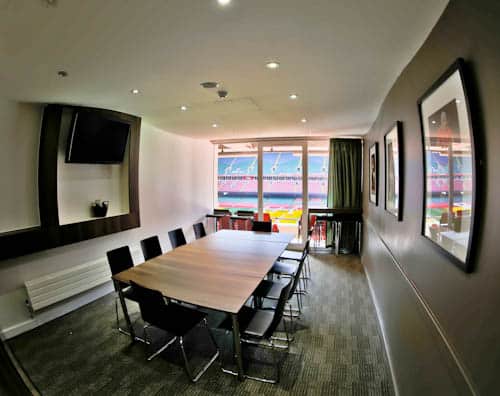 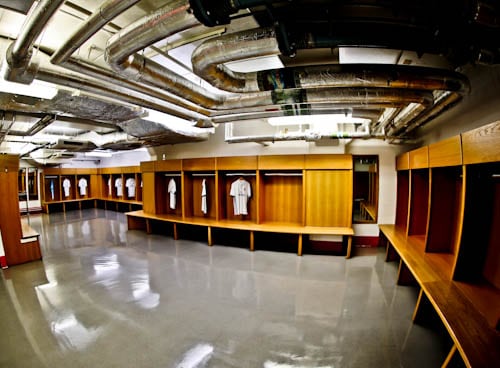 I would describe the away team dressing room as uninspiring.  Uninspired is exactly how the Welsh rugby team wish there opponents to be when they visit the Principality Stadium.  Nonetheless, the dressing rooms are spacious and space is very important to a team of rugby players! 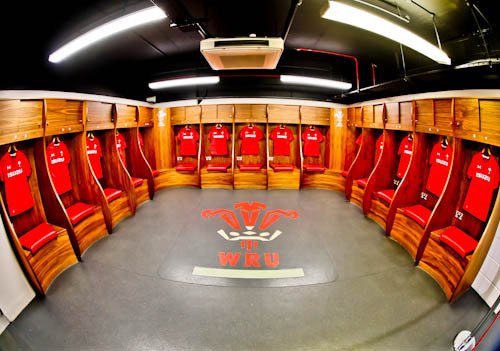 The Welsh rugby team dressing rooms are very inspiring.  They feature Welsh logos and colors throughout.  When you’re in the Wales dressing room, the tour guide will play a recording of a former manager giving a team talk.  As a result, you have a true sense of the pre match feeling of the Welsh dressing room.  Additionally, the Welsh rugby team have access to some excellent warm up facilities which you’ll also see. 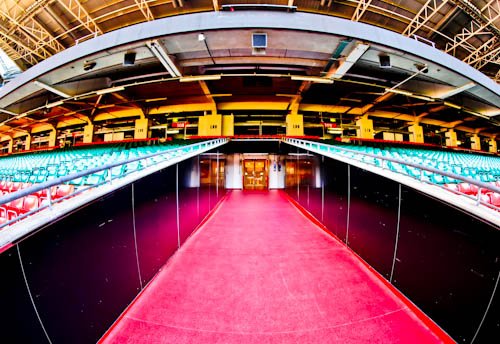 Now you’ve seen the dressing rooms it’s time to take the walk down the players tunnel.  The guide will nominate team captains to lead each team to the pitch.  If you’re visiting with kids I’m sure they’d love to be a team captain. 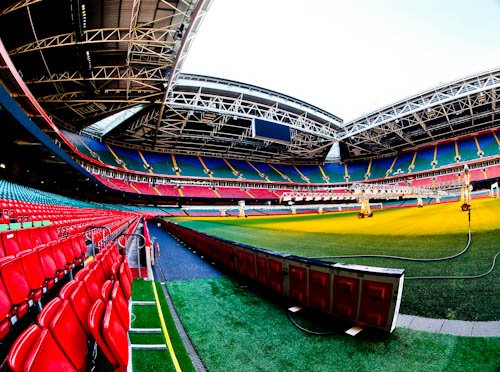 Pitchside is one of the most popular places to take a photo on the stadium tour.  Did you buy a Wales jersey from the Wales Rugby Union Store?  If so, here would be the perfect place to pose in it. 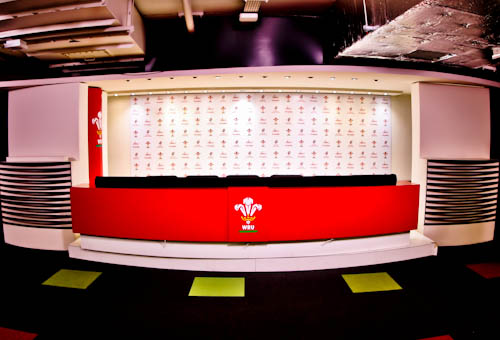 You will probably recognise the press room from the TV.  This is where the managers and players give press conferences about the match.  Imagine all the rugby greats who have sat here.  This room will have been especially full during the 2017 Champions League final press conference.  As part of the tour you’re welcome to sit and pose for photos in the press room. 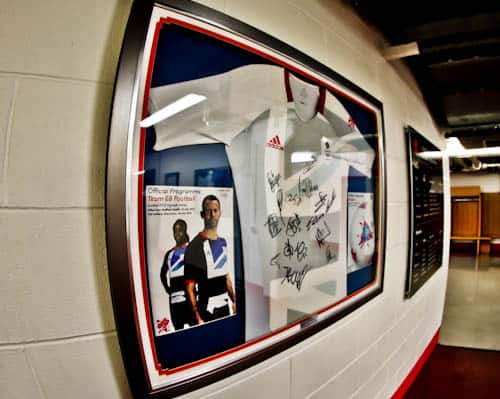 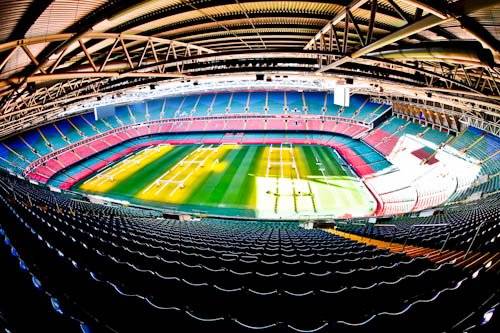 Enjoy the Principality Stadium tour.  Even if you’re not a rugby fan it’s a fun tour to take and who doesn’t want to take pictures in one of the largest stadiums in the UK!  Moreover, due to its location in central Cardiff it’s an extremely convenient stadium to visit.  Finally, I recommend you check the schedule and book a stadium tour online in advance.

Check out Twickenham, the home of the England Rugby Team.