RB Leipzig are a top German football team who play in the Red Bull Arena.  Here are a few reasons to visit the RB Leipzig Stadium;

RB Leipzig play in the Bundesliga and regularly compete in the Champions League.  For this reason, you’re guaranteed to watch the highest level of football here.  Buy tickets or book a stadium tour direct on the official RB Leipzig site.  Additionally, view the latest team news and fixtures on their Instagram feed. 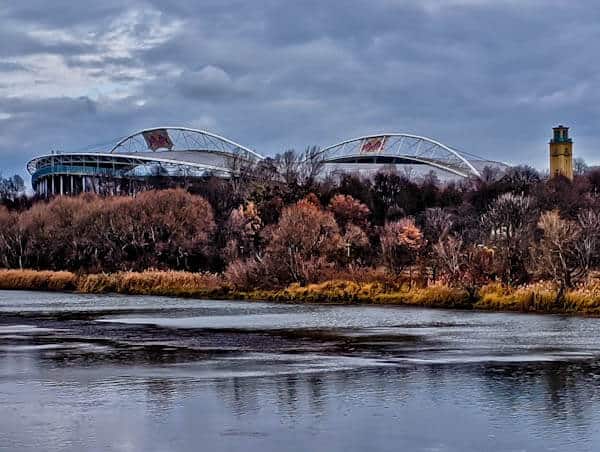 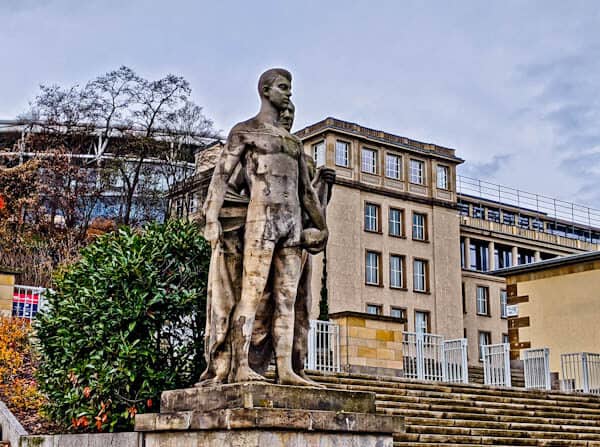 The modern stadium you see today is officially known as the Red Bull Arena.  It has been constructed within the historic Zentralstadion.  Zentralstadion was built in 1956 during the East Germany era.  As a result it’s a rare example of East German architecture.  Arrive early at the stadium and take time to admire this unique architecture. 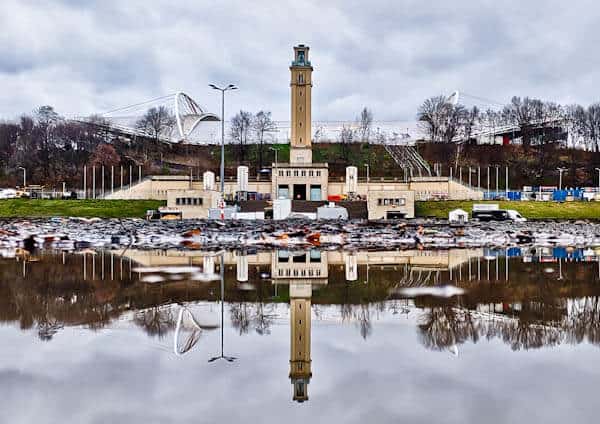 Something which stands out when you arrive at RB Leipzig stadium is the 42 meter tall clock tower.  It’s named after a German communist who was beheaded by the Nazis for his political views. 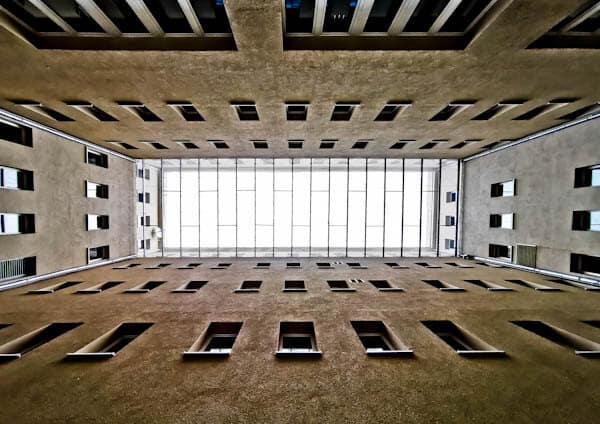 Leipzig is a city famous for its inner courtyards.  If you’re in the city to see these then you must visit the Red Bull Arena.  On a stadium tour you can see this lesser known inner courtyard. 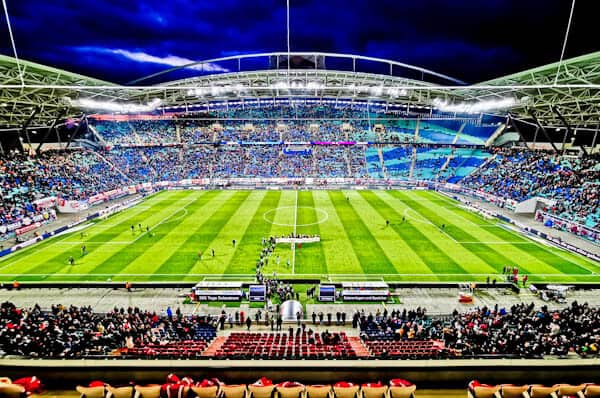 RB Leipzig Stadium is officially known as the Red Bull Arena and has a capacity of almost 43,000.  As a result it’s the largest stadium in East Germany.  It was built inside the former Zentralstadion which had a capacity of 100,000 and was one of the biggest in Europe.  Five World Cup 2006 games were played here including the second round game between Argentina and Mexico.  Several concerts have been played here including Paul McCartney, Tina Turner and Bruce Springsteen.  Lastly, if you’re going to watch a concert in Germany, pick the Red Bull Arena as the stadium design enhances the acoustics.

A quick fact about RB Leipzig; they were founded in 2009.  It’s remarkable that such a new team were second in the Bundesliga as I watched them play. 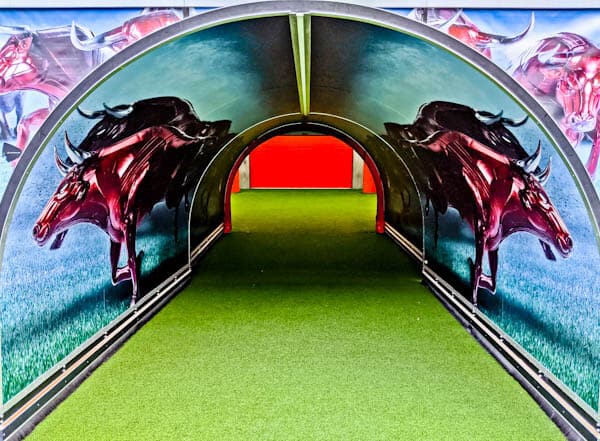 If you take a RB Leipzig stadium tour you can walk through the players tunnel.  What makes this players tunnel stand out are the huge red bulls you walk past to enter the stadium.  This is definitely a top photo location on the tour! 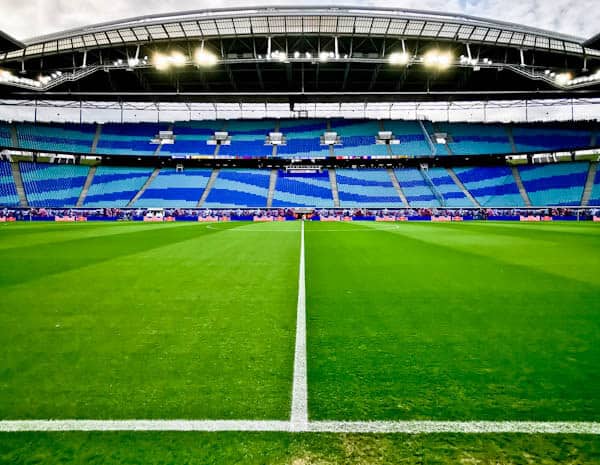 Stand pitch side and take in the enormity of the stadium.  Imagine the atmosphere if you were stood here when it’s full.  Again, pitch side is a top spot to take a photo.  Even more so if you’re wearing an RB Leipzig shirt. 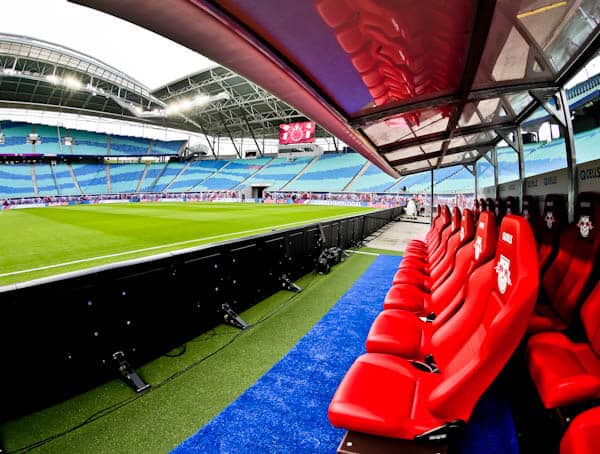 Sit in the dugouts where the famous managers and players sit.  As RB Leipzig play in the Bundesliga as well as the Champions League, some very famous faces have sat here.  As a matter of fact, countless German national players have visited the stadium.  That’s not to mention Leipzig’s very own Timo Werner. 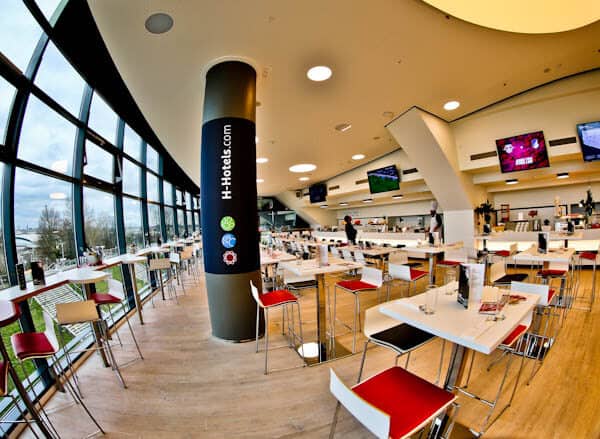 Why not treat yourself to a VIP match day ticket?  This includes access to the lounge before, during and after the game.  Here you can enjoy a large buffet as well as unlimited drinks of your choice.  Finally, the fact that RB Leipzig stadium is close to the city center complements the VIP experience.  Even if you overindulge on the food and drink you can simply walk or take a short tram ride back to the city center afterwards.  Furthermore, as it stays open 2 hours after the final whistle, the majority of fans will have already left. 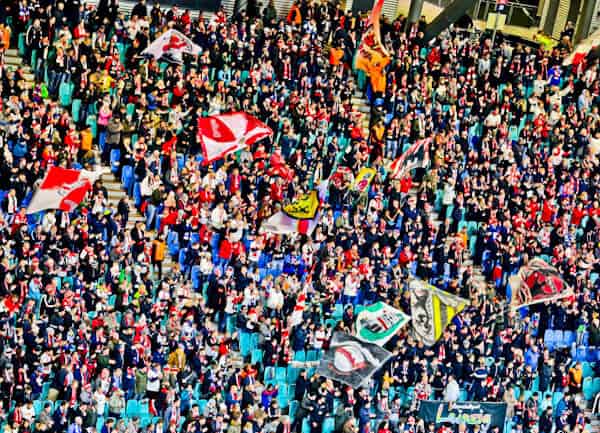 Within the RB Leipzig stadium you’ll experience a good atmosphere as well as a family friendly vibe at the same.  As a result, it’s one of the best places in Germany to watch a Bundesliga match. 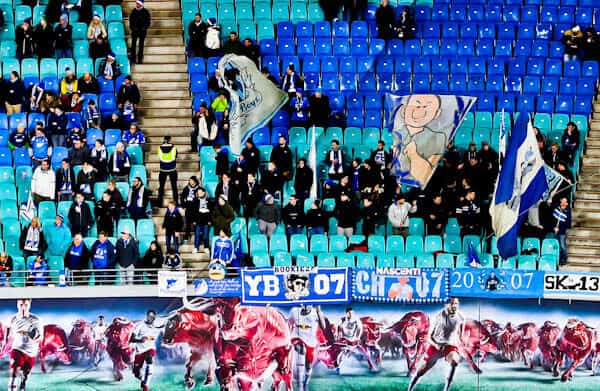 When I visited it was RB Leipzig vs Hoffenheim.  Although the home part of the stadium was full, there were very few Hoffenheim fans.  Did they know beforehand they were going to lose and not make the journey east?  Were they intimidated by the huge red bulls painted around the stadium?  In my opinion Leipzig is a wonderful city to visit whether your team are expected to lose or not. 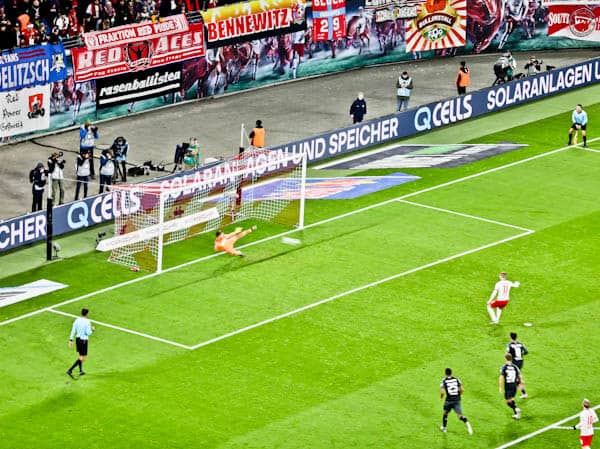 RB Leipzig vs Hoffenheim was the match I watched.  It finished 3-1 to the home team and German national team player, Timo Werner scored twice.  I was lucky enough to capture a photo of his penalty which made it 2-0.  RB Leipzig were second in the Bundesliga after this game which is incredible considering they were founded only 10 years ago! 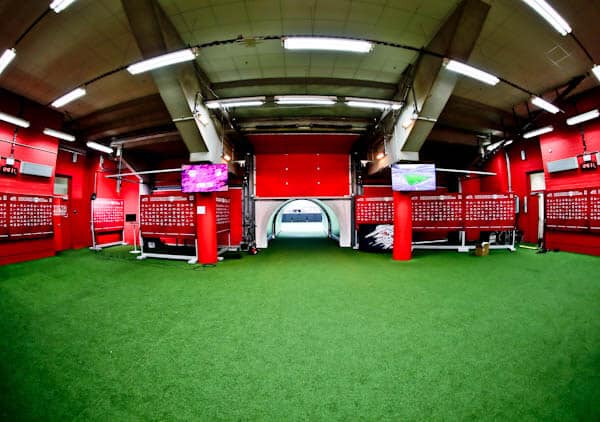 When you watch the match highlights you’ll see the players talking about the match in front of sponsor boards.  These are in fact located at the entrance to the players tunnel.  If you take a stadium tour you’re welcome to take photos in front of these flash interview boards.

RB Leipzig have a large homely press room.  You’ll visit this as part of a stadium tour and you’re welcome to sit where the manager sits and pose for photos.  Imagine the amount of press in the room on a Champions League night.  Lastly, notice the strategically placed Red Bull fridges.

Leaving Via the Historic Stadium 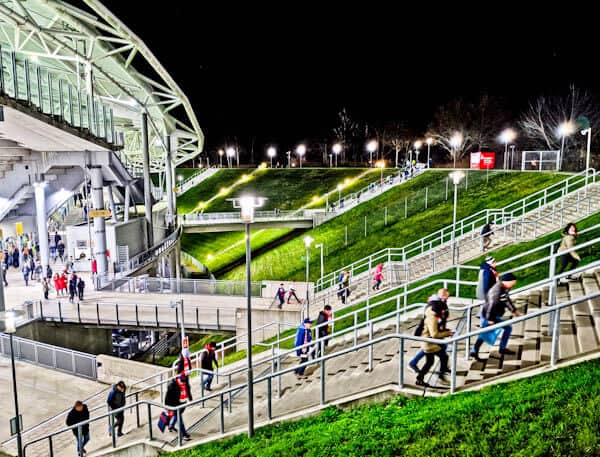 When you exit the Red Bull Arena you must first climb the staircase over the former stands of the Zentralstadion.  For me this was a fitting end to a truly once in a lifetime experience.

Enjoy your Visit to the RB Leipzig Stadium 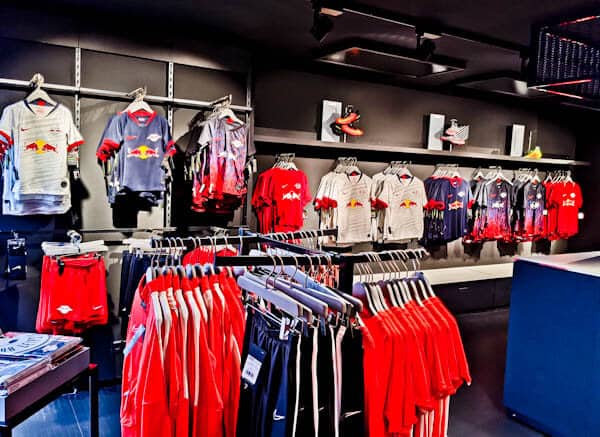 Enjoy the match, stadium tour – or both.  With the city center location and state of the art facilities it’s perhaps the best city to watch a German Bundesliga match.  Before your visit, don’t forget to check out the RB Leipzig merchandise in the club shop.  There’s one in central Leipzig and one in front of the stadium.  Perhaps buy some merchandise to wear during your stadium visit!

For match day ticket and stadium tour information visit the official RB Leipzig site.  Alternatively, check out the Instagram posts and stories for the latest pictures, results and fixtures.

Staying for a few days? I highly recommend Charly’s Leipzig.  Interested in historic German architecture or the Bundesliga?  Visit Olympiastadion in Berlin.