Rome – Things to do in the Italian Capital 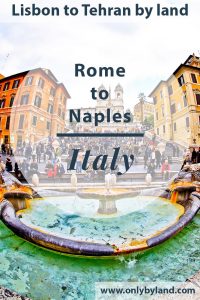 What to see and photograph in Rome

The whole of the historic center of Rome is a UNESCO world heritage site.  You must see the following on a trip to Rome;

Rome has thousands of hotels.  Prices are reasonable for a major European capital. 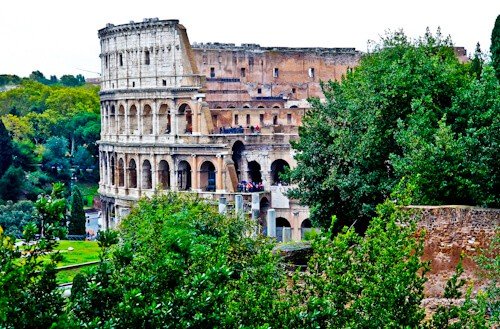 The most popular place to visit in Rome is the Colosseum and deservedly so.  It’s the largest Roman Amphitheater in the world.  Back in the day the Colosseum could hold between 50,000 to 80,000 spectators.  They would visit to watch man versus beast games.  It’s possible to visit the Colosseum underground where the beasts were kept.  Read about my Colosseum visit.

If you wish to visit a quieter yet just as impressive Roman Amphitheater you should visit the Pula Arena in Croatia. 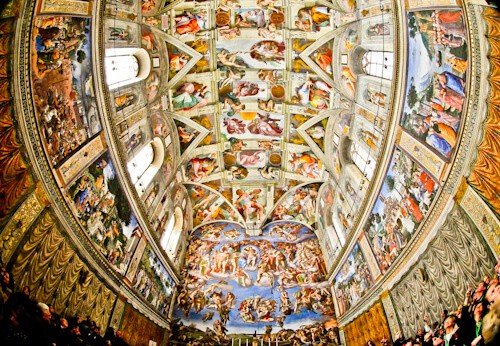 Vatican City is a must visit whilst in Rome.  First of all, it’s the smallest country in the world.  You’ll add another country to your list!  Secondly, the whole of Vatican City is UNESCO site.  You’ll see 3 masterpieces by Michelangelo as well as the famous Raphael rooms.  The famous Sistine Chapel contains 2 of Michelangelo’s masterpieces and is located in the Apostolic Palace.  This Apostolic Palace is the official residence of the Pope.  Additionally you see the largest church in the world, St Peter’s Basilica.  Read my in depth visit to Vatican City. 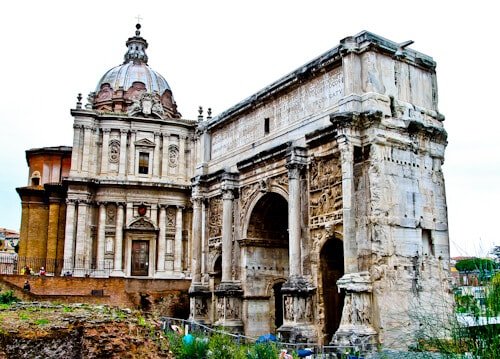 The Roman Forum is located in the center of Rome, consequently it contains several important ancient buildings.  The forum is in fact a valley in between the hills of Palatine and Capitoline.  Due to the Roman practice of building over earlier ruins there are ruins here older than 2000 years.  The ancient buildings are all named after people or gods.  Romans believed if they named a building after themselves they would become gods.  The Arch of Septimius Severus (above) is named after a former Roman emperor.  Another nearby building is the Temple of Saturn, named after the god. 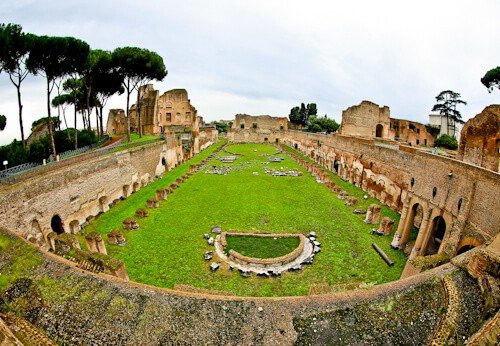 Palatine Hill is the centermost of Rome’s 7 hills.  It stands at 40 meters tall over the Roman Forum.  On top of the hill is the stadium of Domitian.  In its prime it held between 20,000 to 30,000 spectators.  The stadium would mainly host athletics contests, however after damage to the Colosseum in 247 AD it temporarily hosted gladiator duels. 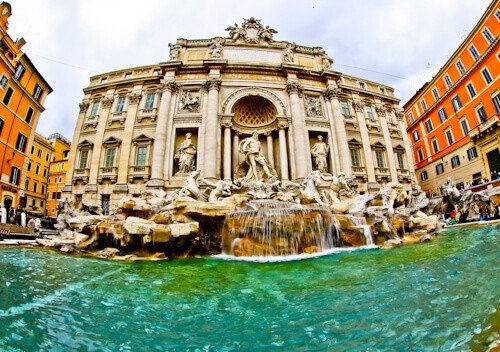 The Trevi Fountain is a Baroque style fountain by Italian artist Nicola Salvi. The sculpture of the Trevi Fountain is of a virgin finding a source of pure water.  This is a true event which happened in 19 BC.  Famous movies filmed at the Trevi Fountain include To Rome with Love and La Dolce Vita.  More recently The Lizzie McGuire Movie was shot here.  It’s one the major attractions of Rome and guaranteed to be surrounded by hundreds of tourists. 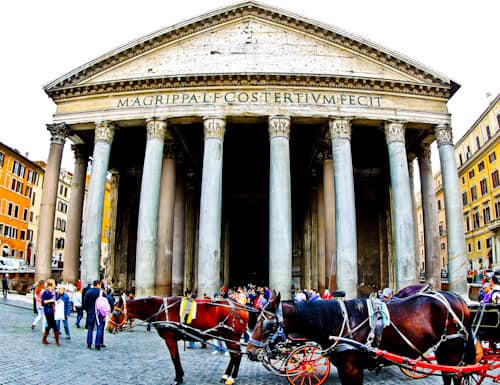 The Pantheon used to be a Roman Temple, in fact Pantheon is Greek for temple.  It’s the largest non-reinforced concrete dome in the world.  This is an impressive statistic considering it’s nearly 2000 years old.  In the 7th century the temple became a church.  As a result of its continuous use, it’s one of the best persevered ancient Roman monuments in the world. 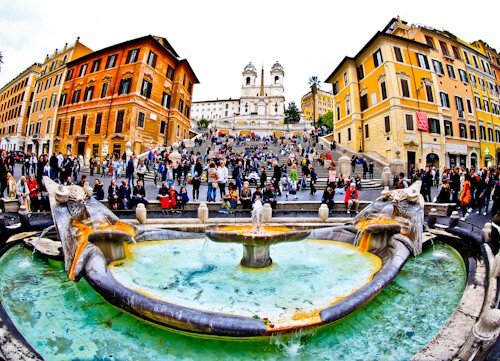 Legend has it, people will find romance at the Spanish Steps, it’s especially romantic during the evening.  Since they were built in the 18th century they’ve been a famous meeting point.  At the top of the stairs is the Trinita dei Monti church.  At the bottom of the stairs is the Piazza di Spagna (Spanish Square), the centerpiece of this square is the fountain.  The fountain is called Fontana della Barcaccia which translates into English as ‘the old boat fountain’.  You can see the old boat in the fountain (above). 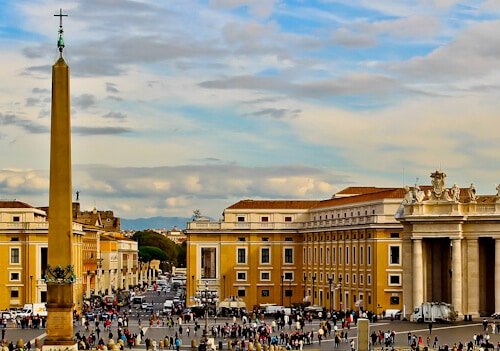 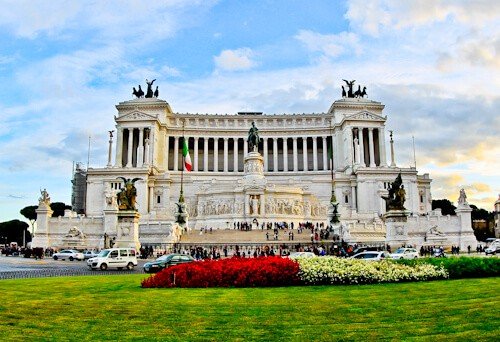 Altare della Patria translates into English as ‘Altar of the Fatherland’.  It was built to honor the first king of unified Italy, Vittorio Emanuele II.  On top of the building are 2 Winged Victory statues, just as the Winged Victory in Brescia.  Vittorio Emanuele II monument is another popular name for the building.  The monument, completed in 1925, is a Giuseppe Sacconi design.  Although it’s not an ancient monument, it’s an impressive place to visit.

Rome is home to 2 top Italian teams, Roma and Lazio.  Both teams share the Stadio Olimpico in the same way Inter and AC Milan share the San Siro.  In addition, the Italy national team play their home games here.  Unfortunately there are no stadium tours available.  The only way to visit the Stadio Olimpic is if there is a football match.  As 2 teams play there, there is a higher chance of seeing a match.  Check out the Roma and Lazio fixtures to see if they are playing when you visit.

How to get from Rome to Naples by bus 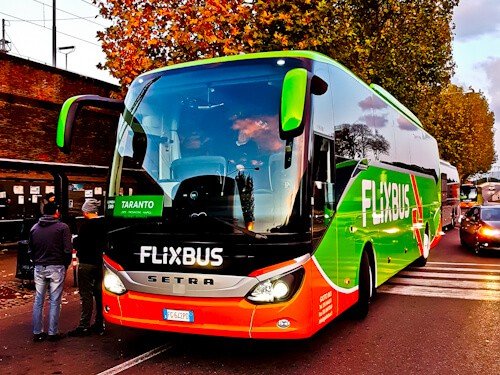 There are regular Flixbus services between Rome and Naples.  In fact you can find tickets for as little as €6.  The travel time between the 2 cities is around 3 hours.  You can take the Flixbus from 2 Rome locations, Tiburtina train station or Rome Fiumicino airport.  During your Flixbus ride you can enjoy complimentary WiFi, plug socket and plenty of legroom.

Of course, if you are craving some luxury and are travelling out of Italy once you finish your tour of Rome, consider a unique way to see Europe.  The Venice Simplon-Orient-Express gives you a travel experience that will be impossible to get on a crowded coach, and it allows you to arrive at your next destination (whether Paris, Prague or Peckham) feeling refreshed and rejuvenated.  It’s a trip that you can only justify taking once, so you may as well try it, especially if this trip is a special occasion.