Things to do in Salvador de Bahia, Brazil

There are many hotels in the Pelourinho, you can normally just arrive without booking and you’ll find one.  If you prefer to book ahead however, most hotels offer online booking. 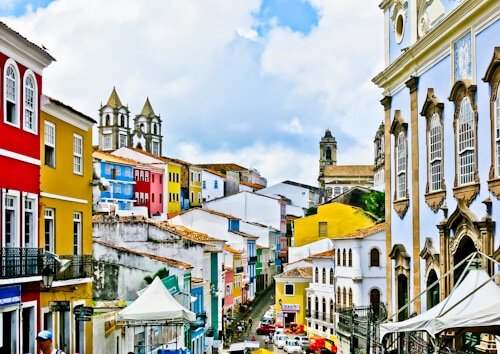 The Pelourinho is the historic center of Salvador.  It’s protected by UNESCO, additionally it’s safe to explore.  In fact it was the first capital of Brazil in 1549 and remained the capital for over 200 years.  You’ll find lots of colorful, colonial Portuguese buildings in the Pelourinho.  For this reason, it’s perfect for Instagram photography!  Furthermore, there are hundreds of restaurants, shops as well as hotels.  The Pelourinho is the best place to stay when you visit Salvador de Bahia.  Moreover, Michael Jackson filmed his short movie, ‘They Don’t Care About Us’ at locations throughout the Pelourinho. 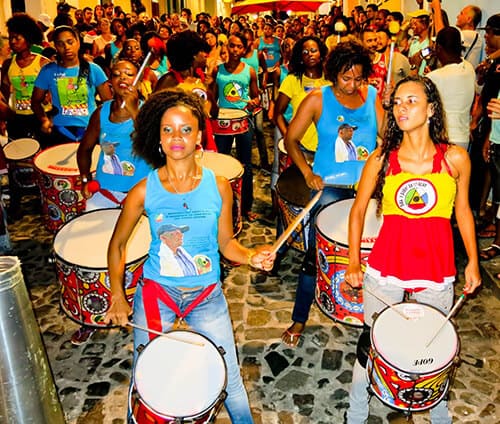 The main reason I visited Salvador is because this is where Michael Jackson filmed his music video ‘They Don’t Care About Us’.  Olodum, the band who feature in his music video play live in the streets of Salvador free of charge, at least once a week.  Ask in your hotel when Olodum are performing.  If they’re performing, the most effective way to find them is by following the music.  The drums are loud, as a result the whole Pelourinho can hear them!

Salvador is famous for learning Capoeira, the Brazilian martial arts dance.  Check in hotels and restaurants around the Pelourinho for any adverts for Capoeira classes.  If you plan on staying in Salvador a while you could also take Portuguese classes. 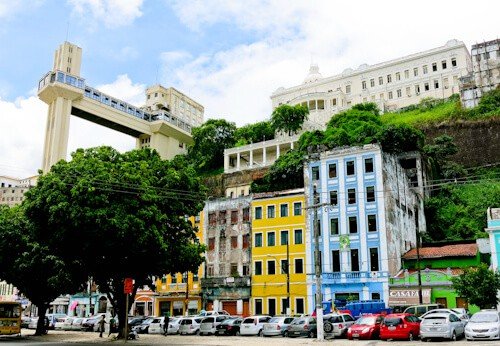 The Lacerda Elevator connects the upper part of Salvador (Pelourinho) with the lower part of the city.  You can walk up and down or take the elevator.  The panoramic view from the top is amazing, you can see out over the ocean and beach.  Additionally, there is a plaza at the top of the elevator where you can watch people performing the Capoeira dance, a tip will be expected.  Rio Branco Palace and is also located on the plaza at the top of the elevator, the model market is located at the bottom of it. 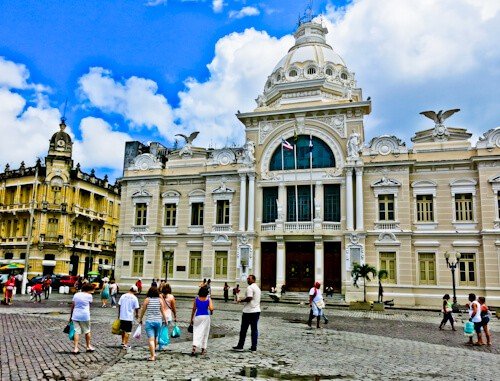 The Rio Branco Palace is one of the oldest palaces in Brazil.  It dates back to the 16th century and was the home of the government when Salvador de Bahia was the capital of Brazil.  The building was bombed at the start of the 20th century.  It has since been restored and named in honor of the Baron of Rio Branco who is considered to be the father of Brazilian diplomacy.  Furthermore, the architectural style is Neoclassical. 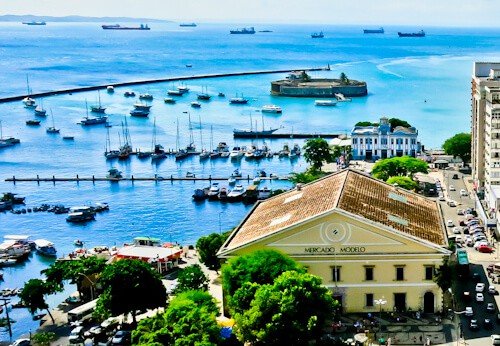 The Mercado Modelo is conveniently located next to the cruise port.  Not only do they sell locally made arts and crafts but they also sell clothes and other typical market items.  It’s definitely worth a walk through to check out what’s going on in there.  Importantly, the market photographs beautifully from the top of Lacerda Elevator. 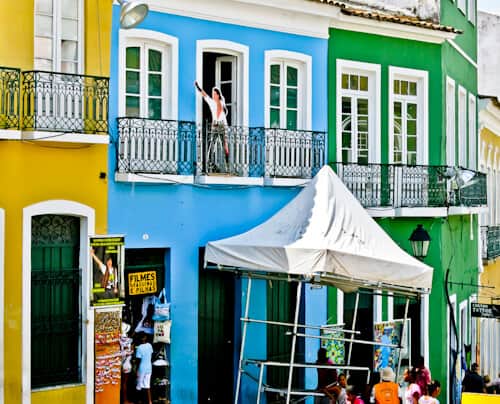 If you watch the Michael Jackson short video, you’ll see him singing on a balcony.  This balcony and Michael Jackson store is located in the center of the Pelourinho opposite the blue catholic church.  It’s possible to pay a few dollars and stand where Michael Jackson did on the balcony.  In addition, you can buy photos and souvenirs of Michael Jackson in the city.  You can even buy replicas of the clothes he wore throughout the short movie!

Church of Nosso Senhor do Bonfim 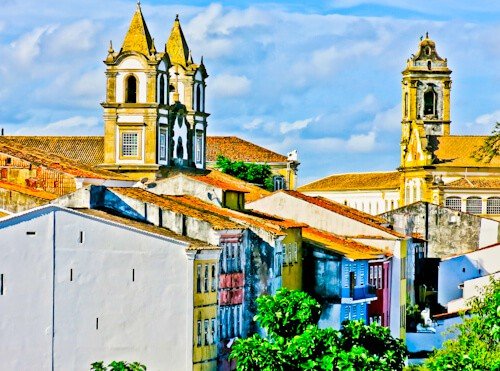 Church of Nosso Senhor do Bonfim is a catholic church but also incorporates Candomble, a religion from Africa.  The Portuguese brought many slaves to Salvador de Bahia, for this reason there is a lot of African influence.  Candomble actually means to dance in honor of the gods.  As we know from Capoeira, OLODUM and Michael Jackson, Salvador definitely dances in honor of the gods! 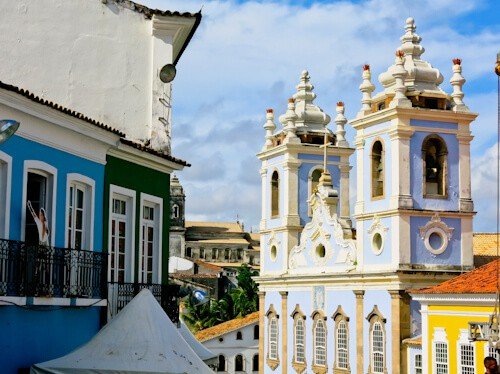 The blue catholic church in the Pelourinho is stunning.  It’s a Brazilian / Portuguese version of the Blue Church in Bratislava, Slovakia.  Directly opposite the blue cathedral is the balcony where Michael Jackson performed during his music video.  The official name for the blue cathedral is Igreja de N. S. do Rosario dos Pretos and it was built in the 18th century. 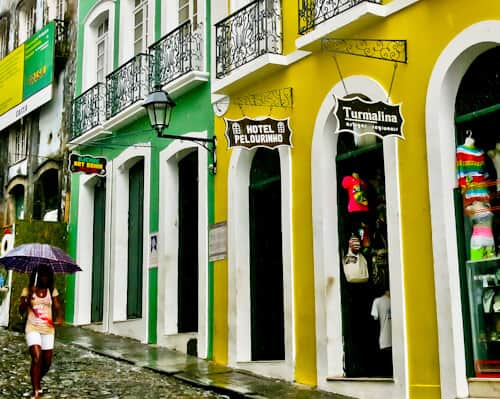 I stayed in the Hotel Pelourinho, which you can see clearly in the Michael Jackson video when he’s dancing on the streets.  It’s not a great hotel, I only stayed there because Michael Jackson was singing and dancing right outside it in the video.  Nonetheless it’s an iconic hotel!

A good way to see the sites of Salvador de Bahia before visiting is to watch the Michael Jackson short video.  Furthermore, you can experience the carnival atmosphere which OLODUM bring to Salvador.

How to get from Salvador de Bahia to Fortaleza 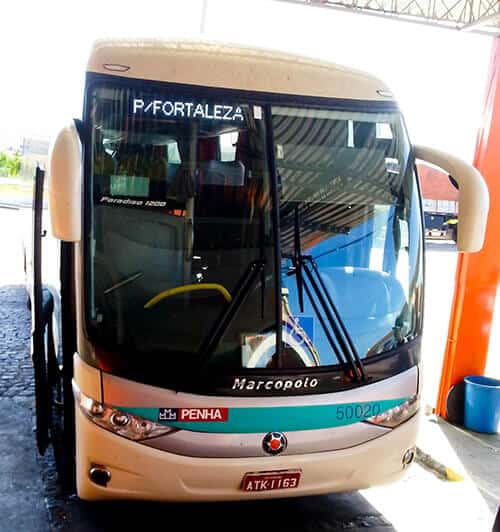 I took the Penha bus service from Salvador to Fortaleza, this was a 21 hour service, and the bus was again luxury with plenty of legroom as well as movies (in Portuguese).