Shiraz Iran is famous for the Pink Mosque and rightly so.  However, there are many more things to do in Shiraz Iran:

Shiraz is one of the top tourist destinations in Iran.  As a result, you’ll easily find a suitable hotel to stay in.  In addition, consider hiring an excellent value guide, contact me directly if you want the details of an honest Iranian guide. 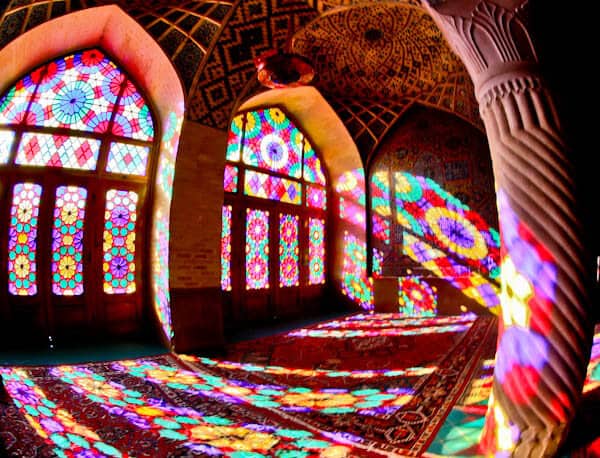 The most famous point of interest in Shiraz is the Pink Mosque.  In addition, it’s also the top Instagram spot in Iran.  Visit early morning or late afternoon when the low light shines through the colorful stained glass windows.  Unfortunately, you may find several tourists in dresses posing for photos throughout the interior.  But remember this is a mosque and a place of prayer for the locals.

If you are visiting the Pink Mosque to make memorable photos I have a recommendation.  The exterior features both colorful and detailed artwork.  The adjoining gift shop sells yellow scarves which match this artwork.  Buy yourself a scarf and make yourself a memorable Pink Mosque photograph. 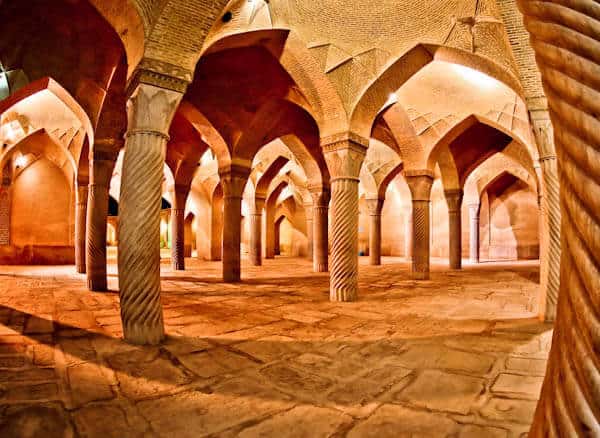 Vakil Mosque is a 19th century structure which features 48 spirally carved pillars.  Some parts of it feature detailed Persian art.  Moreover, there’s a huge plaza with reflecting pool feature in front of it.  Other places I’ve been with similar structures include, Cloisters in Glasgow and Conciergerie in Paris.  Finally, as you would imagine people come from all over the world to photograph this beautiful structure.  In my opinion, the best image of the the Vakil Mosque is embroidered on a Persian rug hanging in the Imam Reza Shrine. 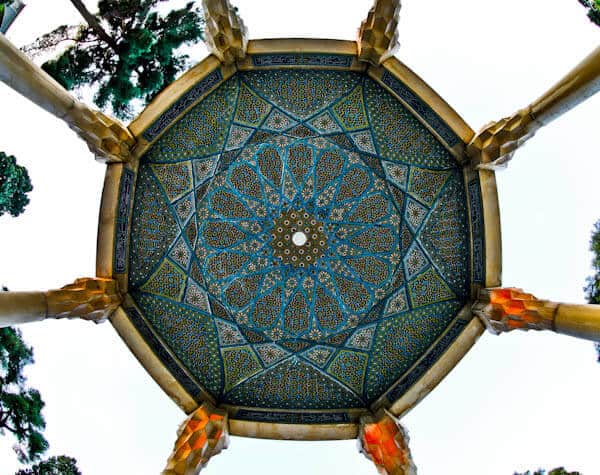 Tomb of Hafez is the final resting place of Persian poet, Hafez.  Within an pavilion is his marble tomb.  If you look up to the ceiling of the pavilion there is some majestic Persian art.  What’s more, feel free to wander around the surrounding gardens which has tombs of other famous people from the Fars region. 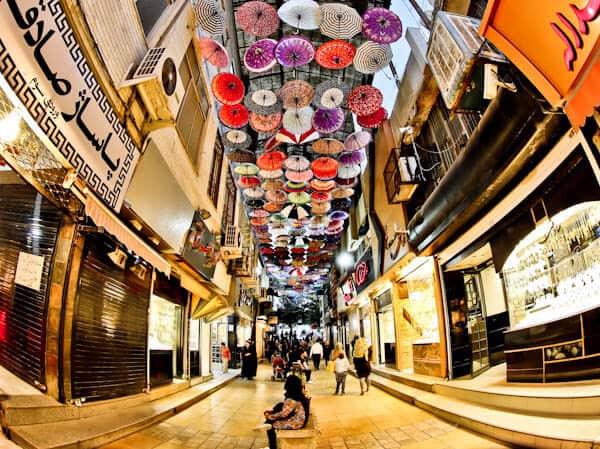 Every Iranian city has a bazaar and Shiraz may have the best bazaar in the country.  It was built during the 11th century under the rule of Karim Khan.  As a matter of fact it features a grand entrance which is worthy of a visit in itself.  Shiraz is of course on the ancient silk route therefore the Vakil Bazaar has thrived over the years. 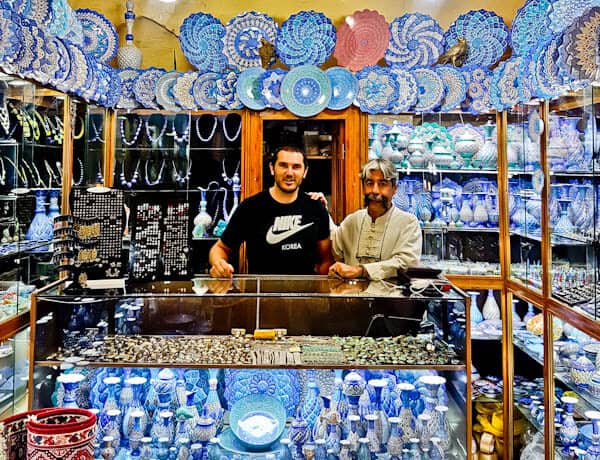 I mentioned that Shiraz holds a major position on the silk route.  For this reason, you’ll find a caravanserai in the center of Vakil Bazaar.  How can you enhance your bazaar experience?  There are now shops which have opened in ancient caravanserai therefore Shiraz gives you the opportunity to shop in a caravanserai.  Lastly, you can stay in a caravanserai hotel in the Iranian desert and eat in a caravanserai restaurant in Zanjan. 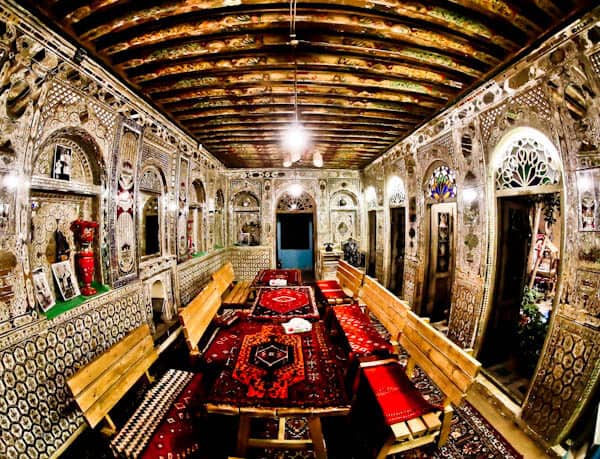 Of course Iran is famous for Iranian tea.  But did you know there were such elegant looking tearooms to enjoy your tea in?  Sit back with good company and enjoy a tea or two.  Are you a photographer?  In a well decorated tea room, I’m sure you’ll be inspired to create 100 unique photos to capture it in its entirety. 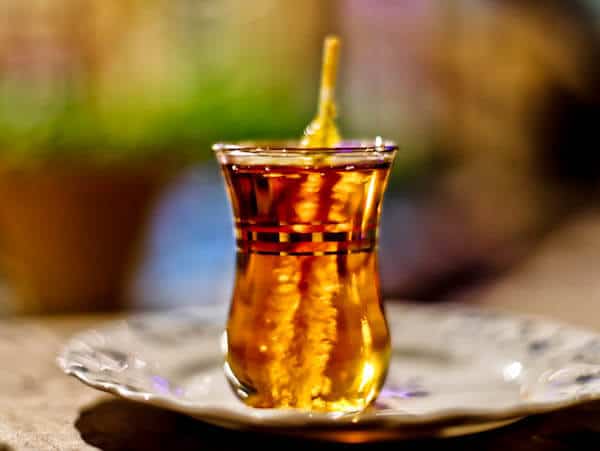 How do you improve an Iranian tea?  Add a stick of crystallized sugar to it.  The perfect start to your Vakil Bazaar of Shiraz shopping experience. 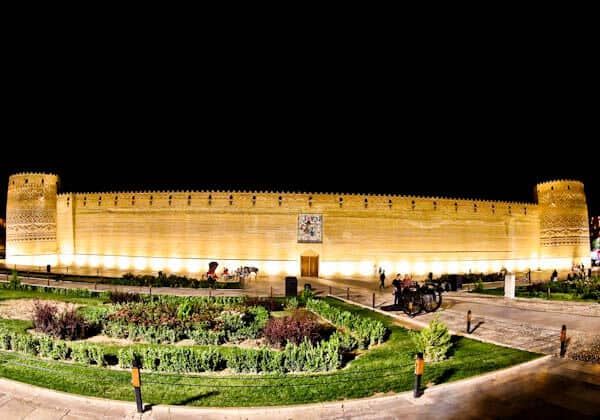 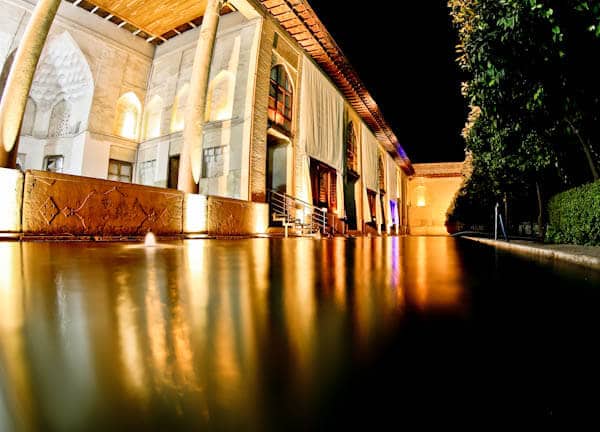 I highly recommend you visit the Karim Khan Citadel interior.  Not only will you find a private garden and internal moat but you’ll also learn how these dynasties lived. 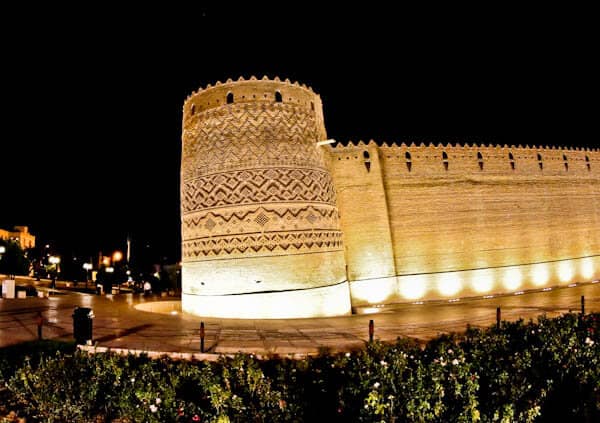 Karim Kham Citadel is square shape connected by four round towers.  Pay attention to these towers as one of them is leaning.  I call this the leaning tower of Shiraz.  Why does it lean?  Because a powerful earthquake damaged the structure.  Read how to visit the Leaning Tower of Pisa on a day trip from Florence in Italy. 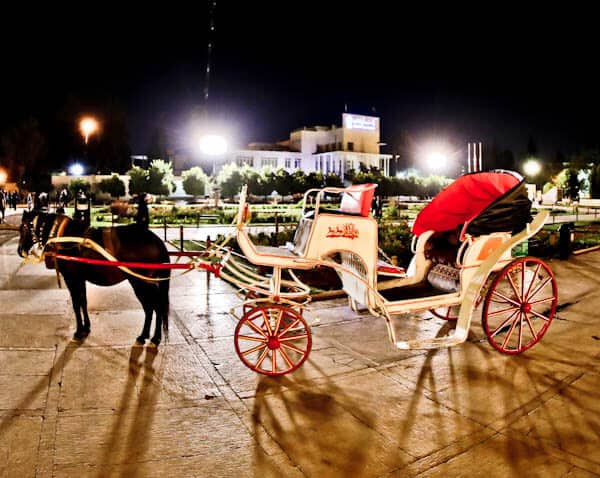 Horse drawn carriages can be found in front of Karim Kham Citadel.  Why not negotiate a good price for a romantic ride around the surrounding gardens? 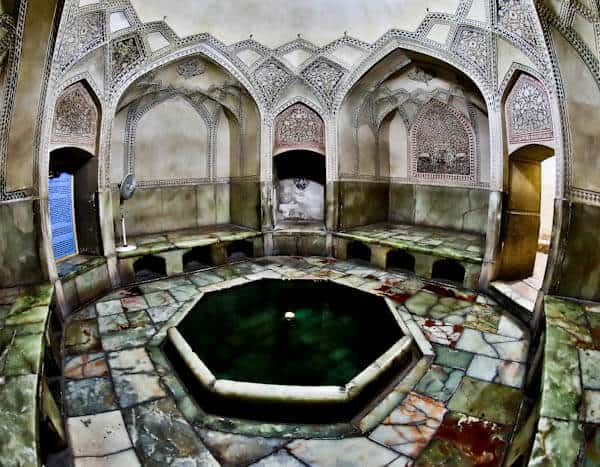 The Vakil Bath House was built for the royals of the Zand Dynasty.  Today however, it has become a museum which features the baths surrounded by wax sculptures.  This really gives you a feel of how things were during the dynasty.  In addition, be sure to admire the intricate Persian artwork throughout the bath house. 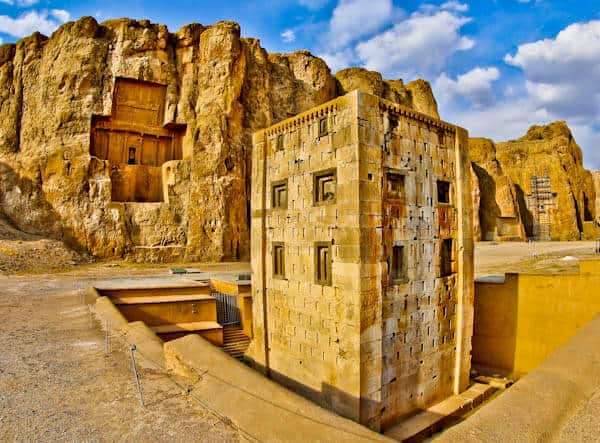 Iran Necropolis is almost on a par with the pyramids of Giza for its enormity.  Some of the tombs date back to well before the birth of Christ.  Other tombs date back to the Achaemenid Empire.  As a matter of fact, if you look closely at the cliffs you can see some rare Achaemenid inscriptions.  I highly recommend you visit Persepolis and Necropolis on a combined day trip from Shiraz. 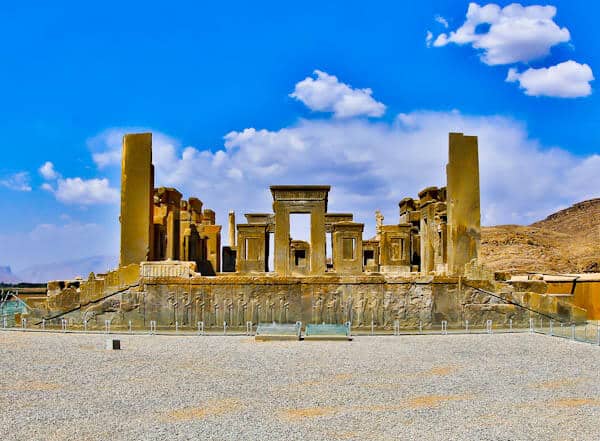 Persepolis is the top archaeological site in Iran.  It is in fact remains of the ceremonial capital of the Achaemenid Empire.  As a result of its historical importance it has been rewarded UNESCO world heritage status.  Simply put, you must visit Persepolis on a day trip from Shiraz.  As a matter of fact, I did a Persepolis Iran Vs Acropolis Greece comparison and a Persepolis visit was the much better option. 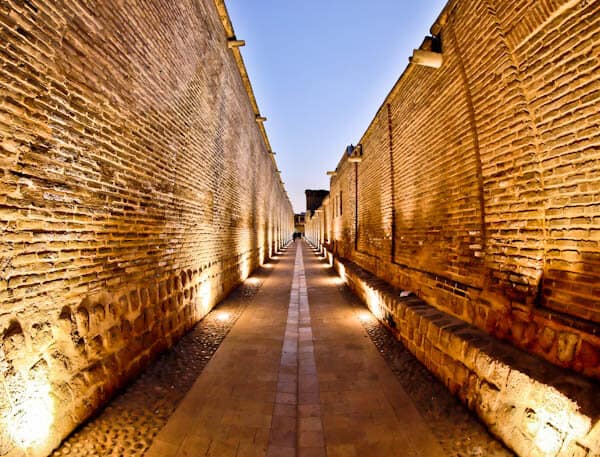 As you wander the streets of Shiraz you’ll be rewarded with some beautiful sights.  Be it a long walkway, a historic doorway or a simple copper shop.  Keep your eyes open and enjoy your time in Shiraz Iran. 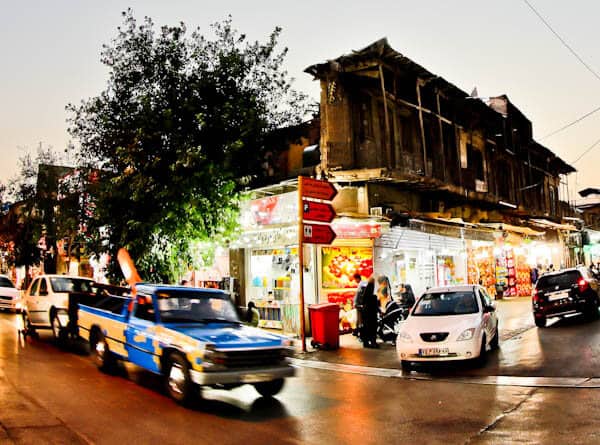 There are lots of classic cars and motorbikes dotted around the city.  If you’re interested in cars you’ll be rewarded as you explore Shiraz. 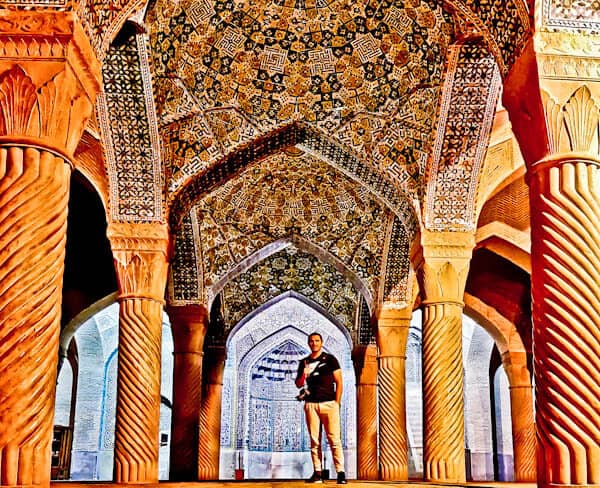 As Shiraz was the capital of Iran for several years there are lots of incredibly beautiful locations.  Not only Pink and Vakil Mosques but throughout the city you’ll find hidden tea rooms as well as other royally decorated buildings.  What’s more, there are very few tourists in some of these areas therefore you have plenty of time to get the perfect shot.

Enjoy Your Visit to Shiraz Iran 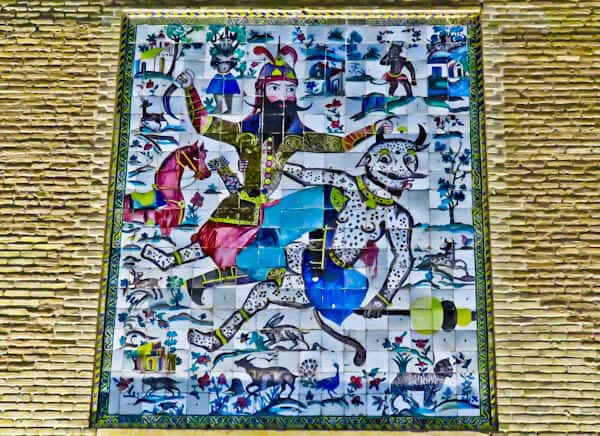 Enjoy your visit to Shiraz Iran.  It’s a city which offers everything for the tourists in a peaceful setting.  From the sights of the city to the good restaurants.  From the day trips to out of this world destinations such as Persopolis to people watching from a tea room, Shiraz is a must visit city at least once in your lifetime.

Read about the current capital of Iran, Tehran