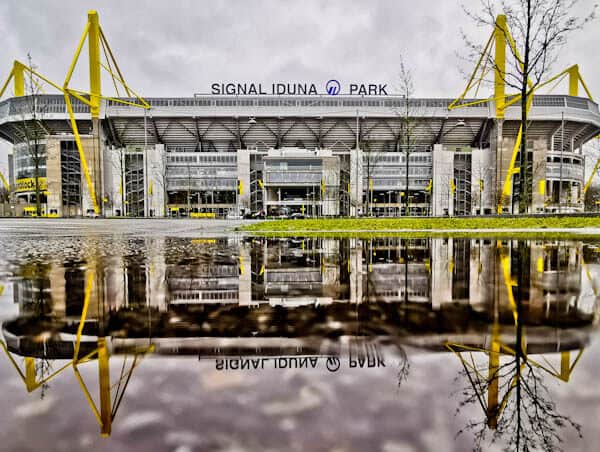 Signal Iduna Park is located in the outskirts of Dortmund, adjacent to the Westfalenhallen Conference Centre.  It’s a 40 minute walk from central Dortmund, however this walk is decorated with legend players stars on route.  Alternatively, take a 5 minute train ride from Dortmund Central to Dortmund Signal Iduna Park.  Finally, you could also take the U-Bahn to Westfalenhallen station.  When you get close it’s easy to see this imposing stadium. 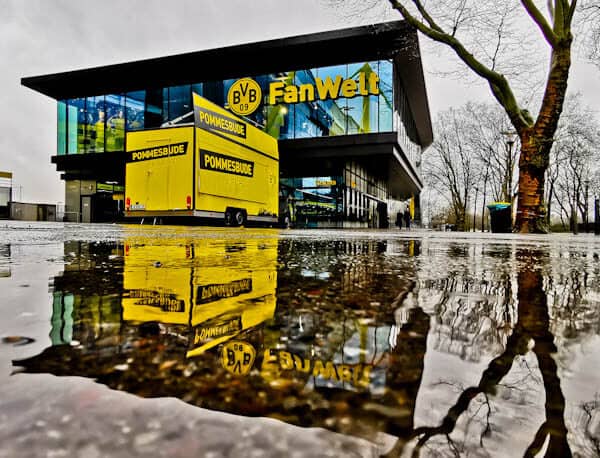 So, you’re visiting on a non match day to take a Borussia Dortmund stadium tour?  The meeting point is at the Fan Shop.  In addition, this is the perfect place to buy some Borussia Dortmund merchandise to wear on your stadium tour.  It’s a huge club shop spread over 2 floors therefore you should find the perfect item.  Arrive 15 minutes before your tour time and book online via the Dortmund website. 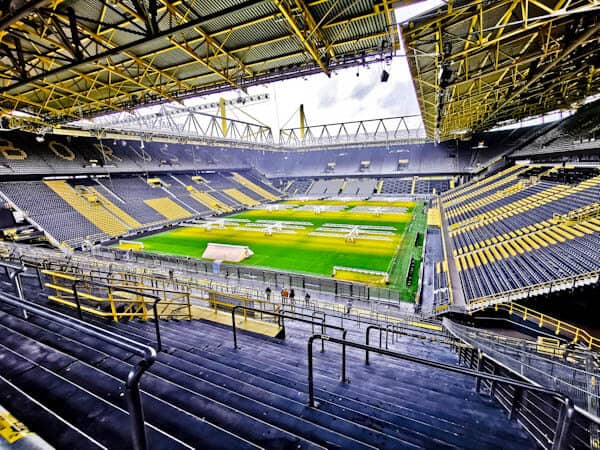 Signal Iduna Park is the biggest stadium in Germany and the fifth biggest in Europe.  Moreover it features the largest single tier stand in Europe as well as the steepest.  As a result, this stadium offers the best atmosphere in football.  However, both Fenerbahce and Liverpool fans have a strong argument against this.  Signal Iduna Park is of course home to Borussia Dortmund and was also a World Cup 1974 and 2006 stadium.  What’s more, the German national team often host teams here.  Finally, the capacity is a massive 81,365. 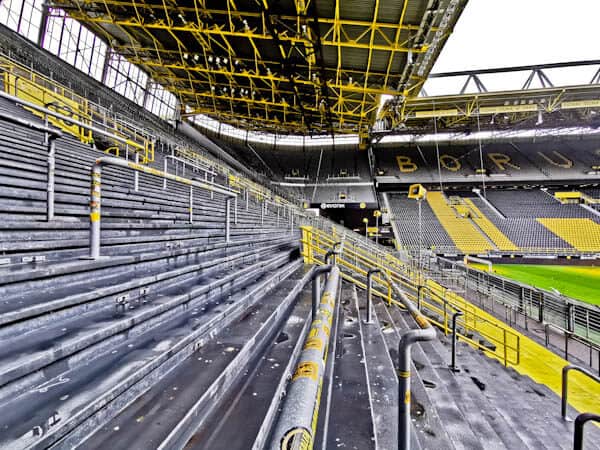 The South Stand at Signal Iduna Park is known as the Yellow Wall.  As a matter of fact, this is one of the most famous stands in world football.  Not only is it the largest single tier stand in Europe but it’s also the steepest.  The Yellow Wall has a capacity of 24,454 in itself.  That makes it bigger than the whole of Union Berlin Stadium or Burnley FC Stadium.  On a stadium tour you get an idea of its enormity but for the atmosphere you must watch a match from here.  Did you know the new south stand at Tottenham Hotspur Stadium, the largest in Britain was inspired by the Yellow Wall? 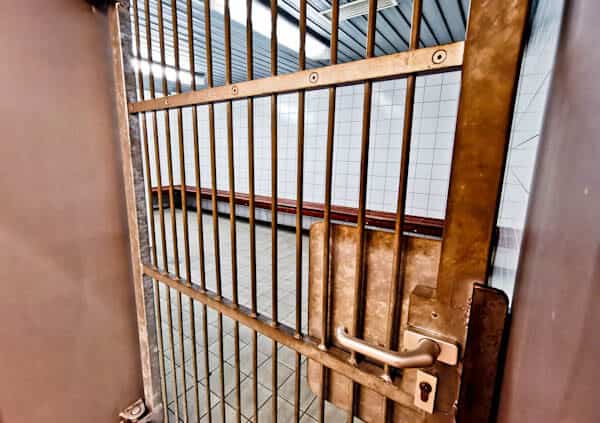 It’s a privilege to visit an on site prison during any stadium tour.  In fact, only here and at the Stade de France in Paris do you get to see the prisons.  Go inside and take your photo behind bars! 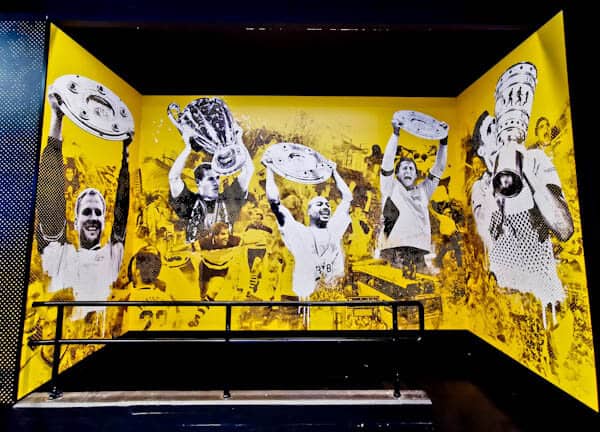 An interesting fact about the players entrance is there’s a slight but subtle difference between the home and away entrance.  Both feature a staircase leading down to the changing rooms.  However, the home staircase has 12 stairs whereas the away staircase has an unlucky 13 stairs.  What’s more, pictures of previous Dortmund successes are displayed over both sets of staircases.  Inspiration for the home team, intimidation for the visitors. 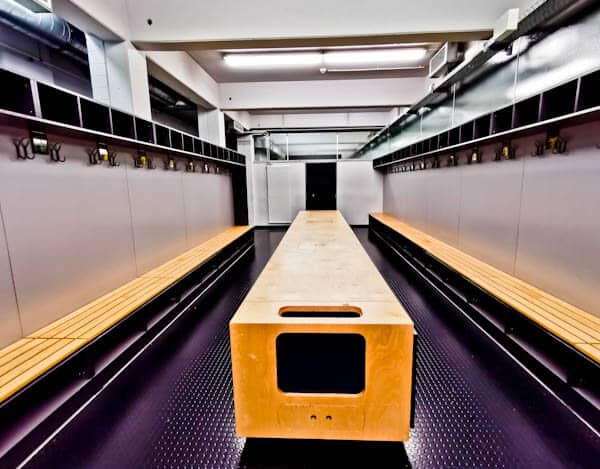 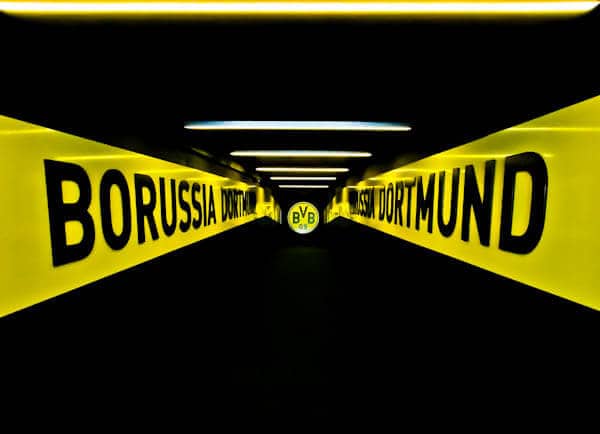 Borussia Dortmund have a unique players tunnel because of how dark it is.  Imagine the visiting team walking through the dark tunnel and arriving in one of the loudest and most intimidating stadiums in the world.  Your tour guide will play the team music to try and recreate the atmosphere.  Finally, the players tunnel makes an excellent spot to take a memorable photo.

Dugout and Pitch Side 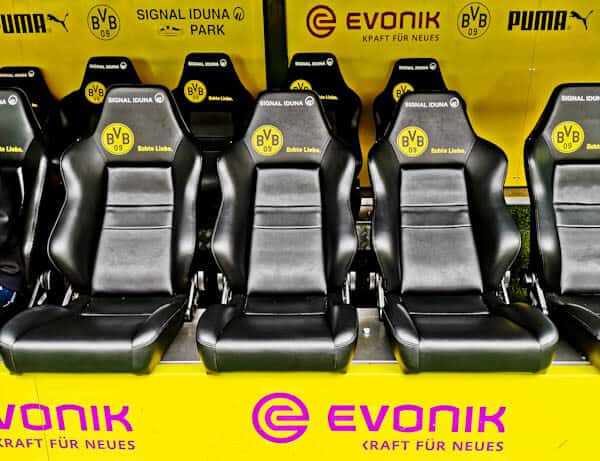 Sit where Jurgen Klopp himself would sit when he was Borussia Dortmund manager.  Again, this is a top photo spot on the stadium tour.  What’s more, you can take a photo pitch side with the intimidating Yellow Wall as a back drop. 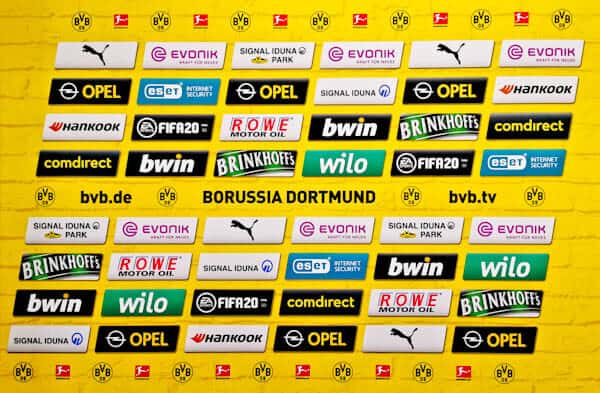 In between the players tunnel and dressing rooms are lots of flash interview boards.  Interview boards are an excellent background for your photos because of their familiarity from TV.  Some visitors even create short videos in front of these boards! 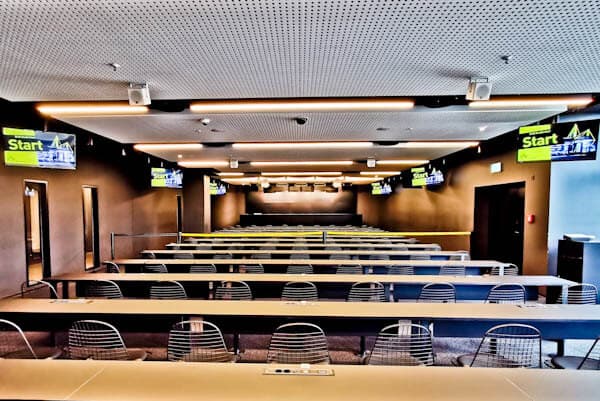 As you would imagine, the Borussia Dortmund press room is huge.  On a Champions League evening this room will be packed with reporters.  Take a look out the window as you’ll be able to see the former stadium.  What was Dortmund’s old stadium called?  Red Earth Stadium. 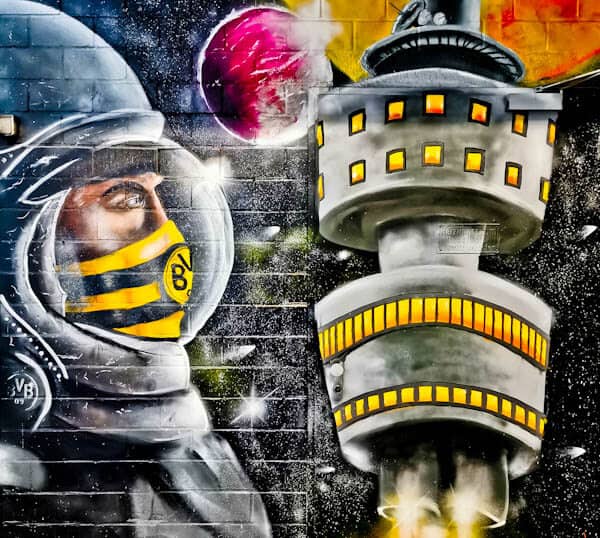 As you walk through Signal Iduna Park on your stadium tour, pay attention to detail.  Street art created by fans decorates large parts of the stadium interior.  The majority is under the Yellow Wall. 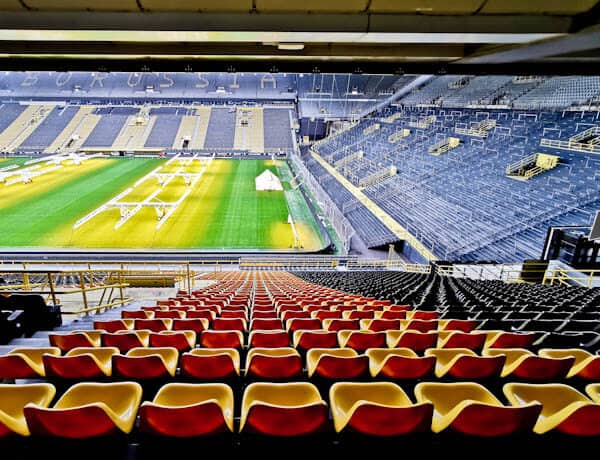 I took the BVB Tour Lunch.  This is a 2 hour stadium tour which visits the places I mentioned above and more.  After the tour is complete, you’re invited to a buffet lunch in the VIP lounge.  I enjoyed a huge plate of delicious food, followed by dessert with a view of the stadium (above).  Even more satisfying than the food is the price.  The stadium tour and buffet lunch costed less than just a stadium tour at Wembley, Old Trafford or Emirates.  If you have two to three hours to spare, I highly recommend you take the tour with lunch option. 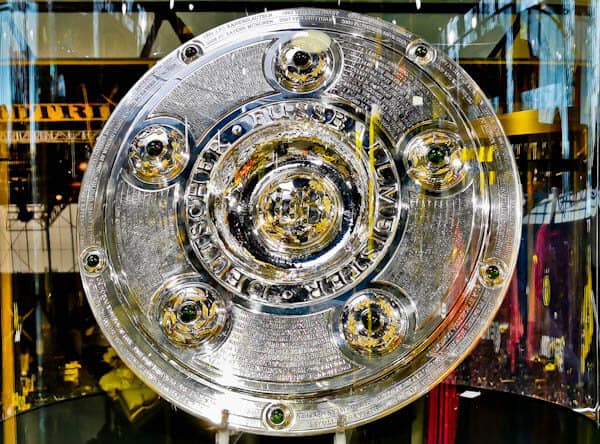 Borussia Dortmund are one of the most successful teams in not only Germany but all of Europe.  Learn all about their deep history and see their huge trophy cabinet in the Borusseum.  Their Meisterschale is locked up on display and you have no chance of holding it.  If you wish to hold a Meisterschale, I recommend you book a private tour of Hannover 96 stadium and request beforehand.  No guarantees but you may be lucky.

How to Get to Signal Iduna Park from Central Dortmund 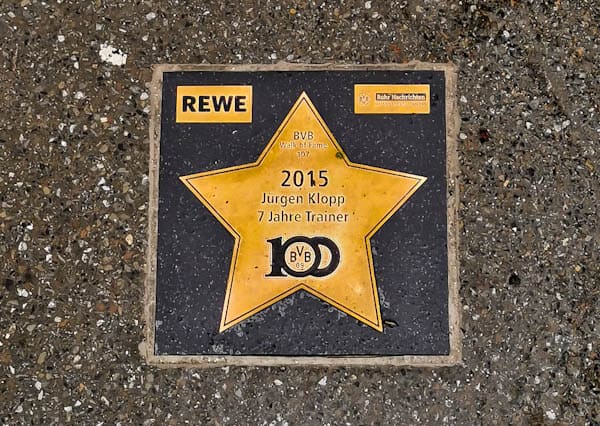 I mentioned you can take the train from Central Station or the U-Bahn.  However, it’s possible to take a 40 minute walk which follows stars of legend Dortmund players.  To pick up the route of stars follow Hohestrasse, Kruezstrasse and Wittekindstrasse to the stadium.  Where is the Jurgen Klopp star?  That’s for you to find out!