Suceava is a city in Northern Romania which is close to the border with Moldova and The Ukraine.  Suceava Romania is the perfect base for a day trip to the Painted Monasteries of Bucovina including;

Suceava is a small town but has a decent amount of good value hotels.  In order to visit the Churches of Moldavia you need to organize a day trip from Suceava (or hire a car).  I did this by asking at the hotel and they set me up with a tour for the next day.

The Churches of Moldavia

The monasteries you’ll see on a tour are both painted on the interior and exterior.  They are unique, in fact, I’ve never seen anything like this anywhere else in the world.  Your tour guide will tell you what every painting on each church means.  The paintings are fresco style as used by Michelangelo and Raphael.  They don’t have the same quality or detail as the Sistine Chapel in Vatican City but they are impressive nonetheless.  Finally, the Sucevita, Humor, Voronet, Moldovita, Patrauti and Probota monasteries are very well preserved. 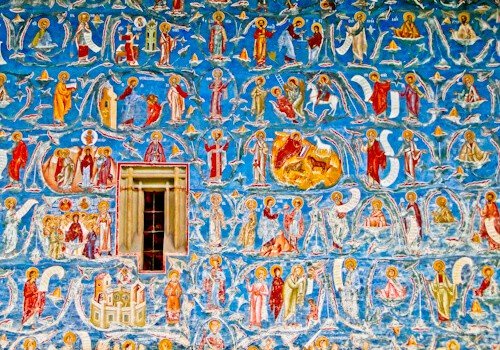 Stephen the Great (Stephan III) would build churches to celebrate victories in battles or to honor lost soldiers.  As a matter of fact, he ordered the construction of Voronet to celebrate victory over the Ottomans.  Founded in 1487, Voronet is the most famous of the monasteries of Bucovina.  The shade of blue used to paint the monastery is know as Voronet blue. 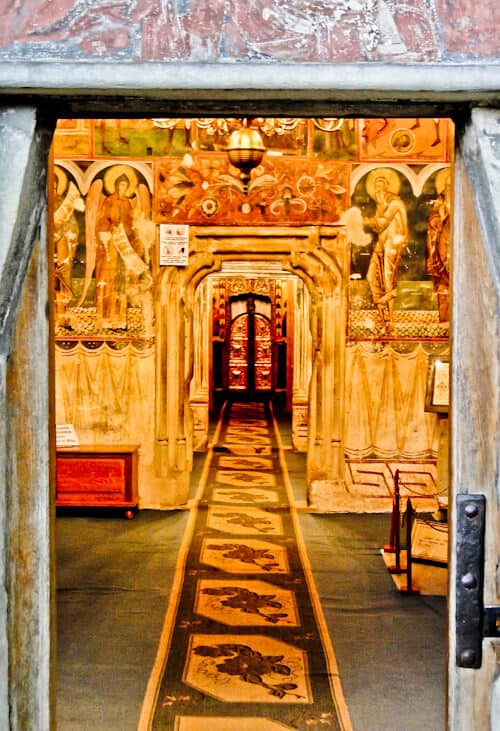 The Voronet monastery is often referred to as the Sistine Chapel of the East.  This is because of the way the walls, roof and dome have been painted in a similar style.  It took 4 months to build the monastery in 1487 but the frescoes weren’t added until 1547.  If you are interested in biblical stories, you’ll love studying the walls.  There is an interesting Tree of Jesus fresco which features Aristotle and Plato.  Does this refer to the Sycamore Tree in Jericho or the Tree of Life in Bahrain?

One of the smallest painted monasteries is the Abore Monastery.  Abore got its name from its founder, Luca Arbore who built it in 1503.  Luca Arbore was an adviser to Stephen the Great.  Genesis is the most interesting frescoe in this monastery. 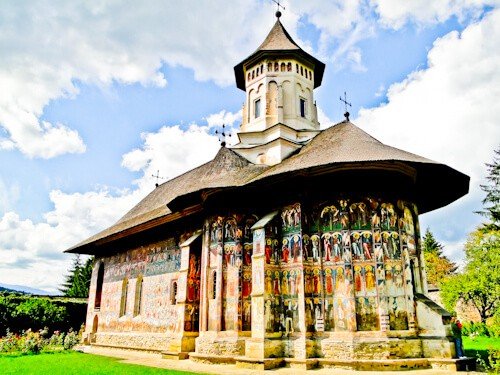 The Moldovita Monastery is very similar in design to the Voronet Monastery.  It was built in 1532 by Petru Rares (Peter IV).  The frescoes were painted in 1537 and are Voronet blue and gold colors.  There is a large fresco of the Fall of Constantinople which of course, is modern day Istanbul in Turkey. 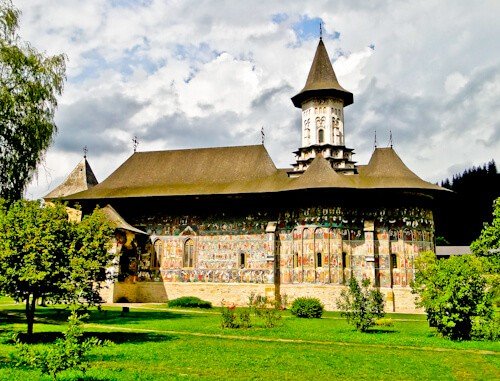 Sucevita Monastery is fortified because not only is it a monastery but also a residence of royalty.  It was built in 1581 by Gheorghe Movila the Bishop.  The monastery is very similar to both the Voronet and Moldovita Monasteries.  Interesting frescoes on this monastery are, ‘The Ladder of Divine Ascent’, ‘Tree of Jesse’ and ‘Hymn to the Virgin’. 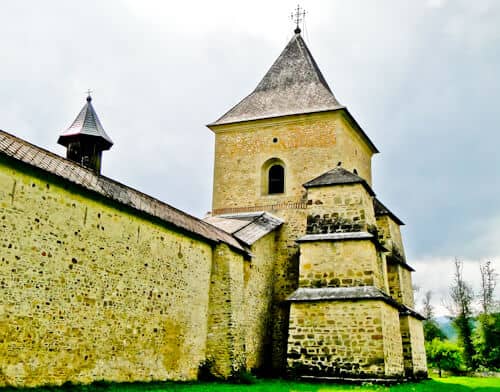 The high defensive walls and towers of the Sucevita Monastery make you feel as if you are walking into an ancient city.  Today however, inside the thick walls of the fortress is a museum showing historical paintings and local artwork.  Furthermore, there are a couple of other notable fortified monasteries in the area.  Southeast of Suceava there is a monastery called Probota Monastery and in the north is Dragomirna.

Built in 1530, Humor Monastery is like a miniature version of the Sucevita monastery.  It does not have a steeple because it wasn’t built by royalty.  The frescoes are slightly faded but you can still identify them.  Notably, there’s an interesting ‘Parable of the Prodigal Son’ fresco. 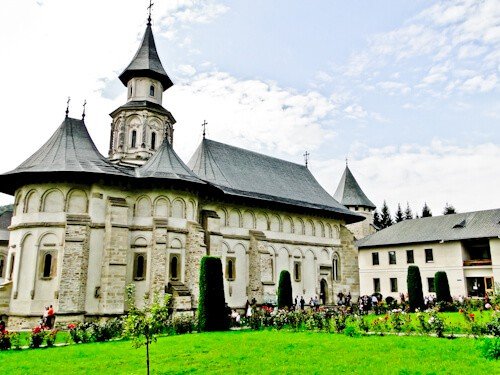 The Putna Monastery is another monastery built by Peter the Great.  It took 3 years to build and was finished in 1669.  It’s believed that the location for the monastery was chosen after shooting an arrow from a nearby hill.  Wherever the arrow landed is where the monastery would be built.  In 1654 it was demolished as it was believed there was gold in the walls.  Today, the only remaining part of the original church is the tower.  It was rebuilt in 1662 and has been refurbished several times.  This is not a painted monastery but still worth a visit as it’s in the area. 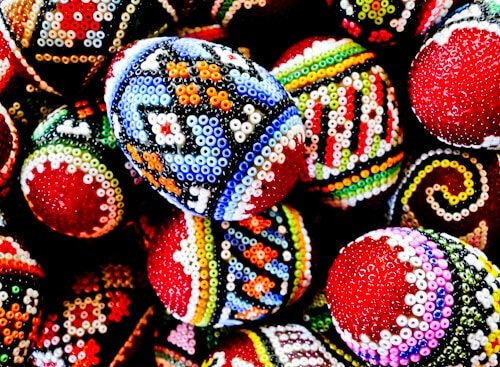 If you haven’t seen enough monasteries or Orthodox churches on the tour then you must visit Saint John the New Monastery in Suceava.  The fortress of Suceava, Bucovina Village museum and St. George Church Mirauti are other notable points of interest of Suceava.  You’ll also find lots of restaurants, souvenir stores as well as supermarkets in Suceava Romania.

Suceava to Brasov by bus 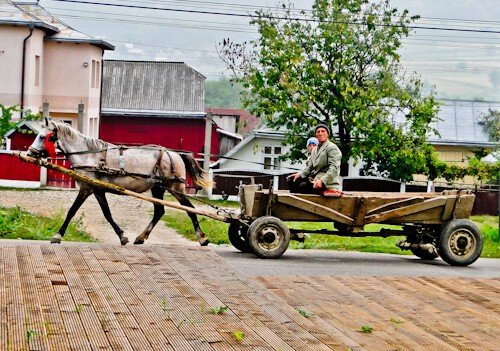 From Suceava I took a direct bus to Brasov which left at 8 am and took 8 hours.  The bus company I used was Transtin, there is another company called Tarsin.  You should go to the bus station the day before you leave to check the timetable and buy your ticket.  As well as the bus there are minivans which go direct to Brasov.  In addition, it’s also possible to take a share taxi over the border to Chernivtsi in the Ukraine.