Hotels in Sunderland are excellent value if you decide to stay overnight. 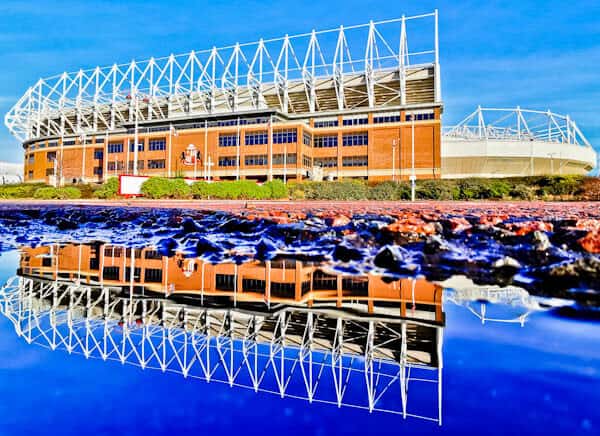 Good news, the Stadium of Light has an excellent location just a 10-15 minute walk from the city center.  If for some reason you don’t wish to walk you can take the Tyne and Wear Metro to either St Peter’s or Stadium of Light stations. 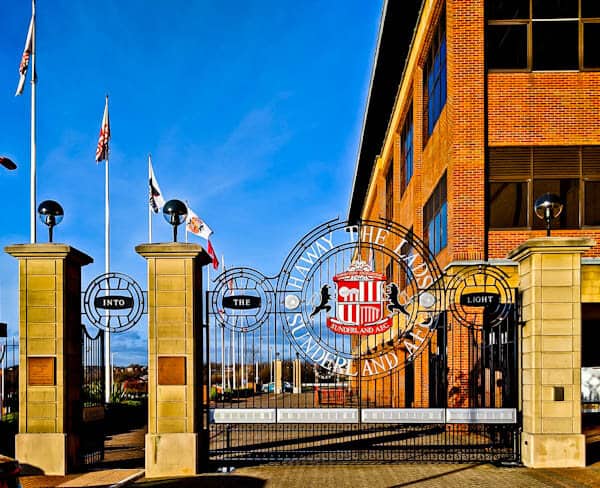 An iconic place to take your photo is in front of the Murray Gates but who is Murray?  Bob Murray was the chairman of Sunderland when they moved to the Stadium of Light in 1997.  Before that, Sunderland played at Roker Park which could not be modernized due to its location within a housing estate.  There are 2 interesting phrases on the Murray Gates.  Firstly, ‘Haway the Lads’ which is local slang for ‘Come on Boys’.  Secondly, it says ‘Into the Light’ which refers to miners returning to the surface after being down the pit.  The new stadium is built on a former mining pit. 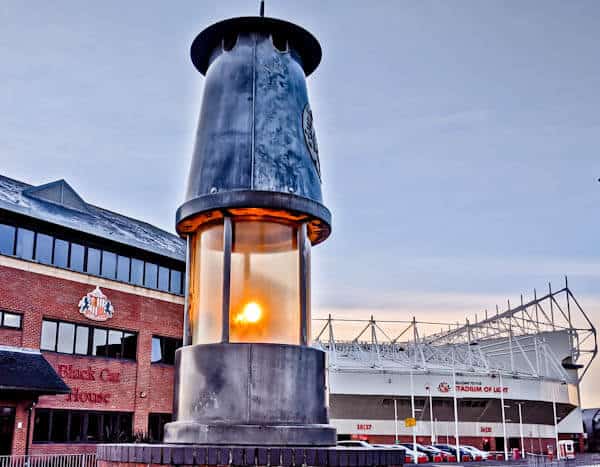 Why is it called the Stadium of Light?  Because the stadium is built on top of a former mining pit known as Wearmouth Colliery.  The mining industry in the UK came to a close just as Sunderland AFC were looking for a new stadium so the Stadium of Light was born.  It’s named to represent the former miners returning to the surface and into the light.  Finally, there’s a huge Davy lamp on display outside the stadium to honor the former miners in the area.  Did you know the Davy lamp was invented in Sunderland? 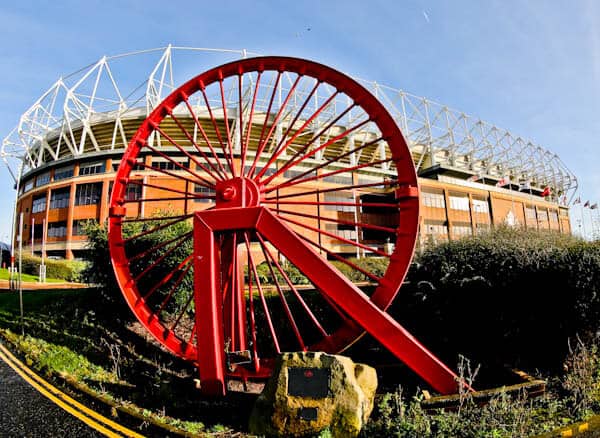 The original pit wheel from Wearmouth Colliery is on display in front of the stadium.  If you read the plaque it explains the history of the colliery and explains this is here to remember the mining industry. 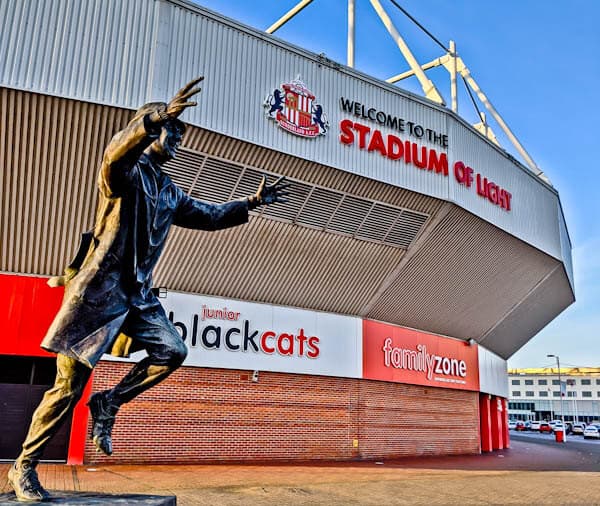 Bob Stokoe was Sunderland manager when they won the FA Cup in 1973.  Before that he won the FA Cup as a player for local rivals, Newcastle United.  The statue in front of the stadium features Bob Stokoe running onto the pitch to celebrate Sunderland winning at Wembley.  Take note of his clothes as you’ll find the originals in the Sunderland AFC museum. 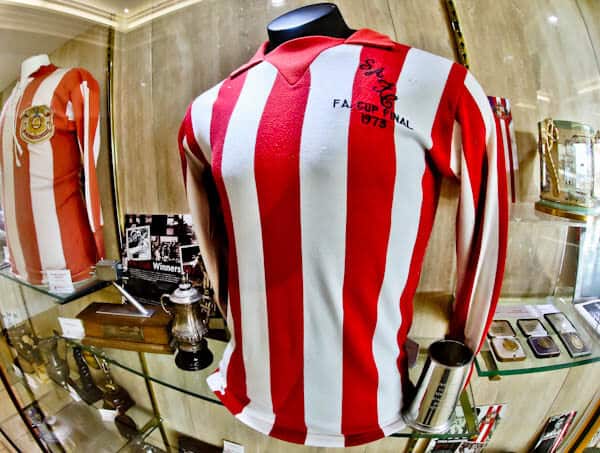 In between the 2 sets of Murray Gates is the Stadium of Light main reception.  This is where the stadium tour begins.  Be sure to arrive a little early so you can view the memorabilia on display.  As a matter of fact, there’s a lot of merchandise from the 1973 FA Cup final on display.  In the final, Sunderland beat Billy Bremner’s Leeds United in the final at Wembley.  Additionally, there’s a huge 19th century football painting on display.  You won’t find anything similar on any other football stadium tour in the UK. 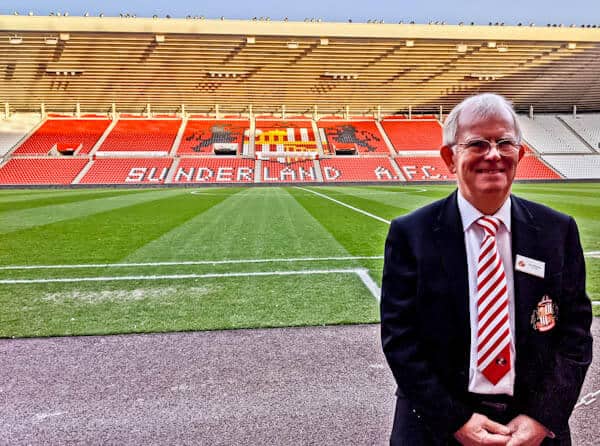 I was lucky enough to have Ken Dinning as my stadium tour guide.  Ken is certainly a tour guide with a lot of knowledge about the club.  I’m sure Ken can answer any question you have about Sunderland AFC, the Stadium of Light or the former mining industry in the area.  By the way, pitch side in front of the Sunderland logo stand is a good place to take a photo. 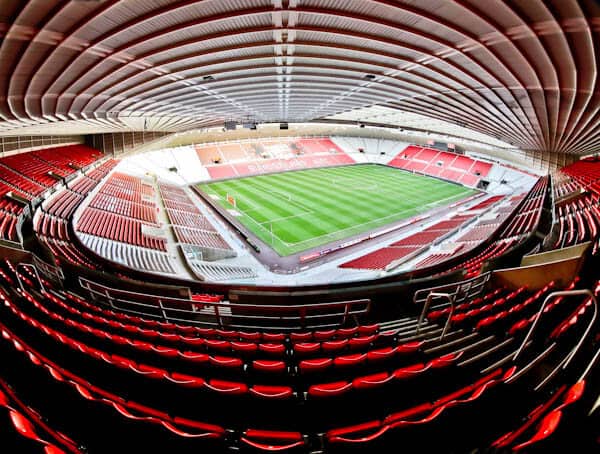 With a capacity of 49,000 seats the Stadium of Light is the 15th largest stadium in the UK.  It doesn’t look so big because it’s built into the ground like the Red Star Belgrade stadium.  Opened in 1997, club legend Niall Quinn scored the first goal here.  Of course, Sunderland AFC play here but the England national team have also played here.  Additionally, music concerts take place at the Stadium of Light with Oasis and Take That having performed here.  Lastly, as I mentioned earlier the stadium is built on a former coal mining pit. 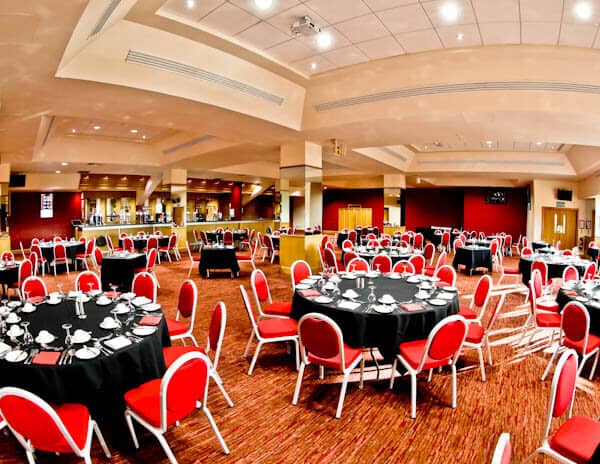 When I visited, Sunderland were in League one.  What this means is that if you watch a match you can enjoy first class facilities at an excellent price!  On the stadium tour you’ll visit the suites and bars available on a hospitality package. 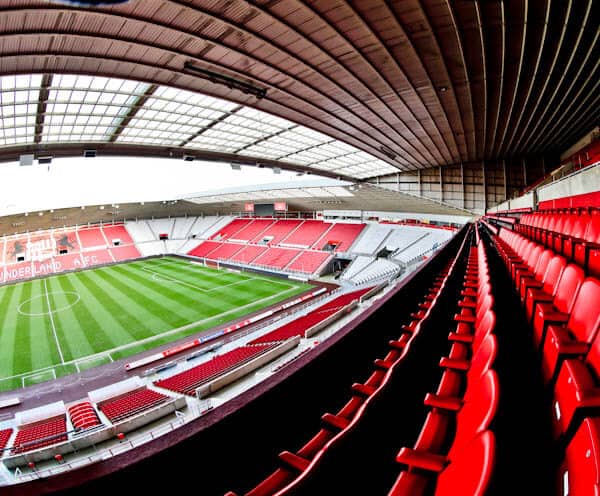 Sit in the comfy padded seats and enjoy the best views of the pitch from the VIP area. 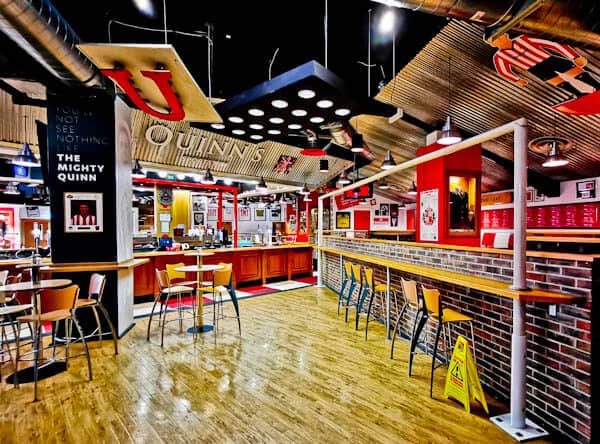 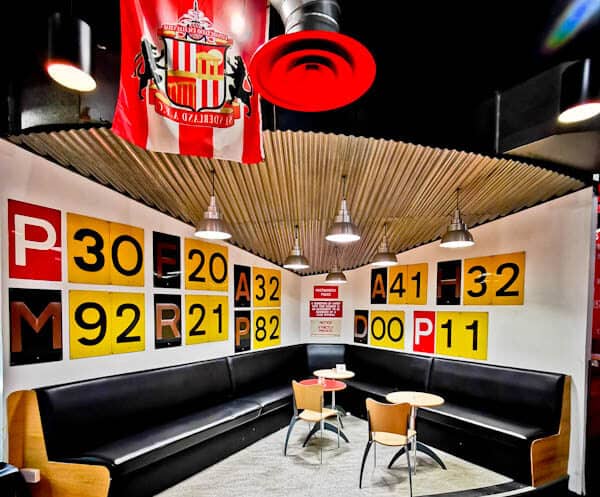 Things looked very different inside a football stadium before the electronic scoreboard was invented.  In Quinn’s Bar original numbers from the old scoreboards are on display. 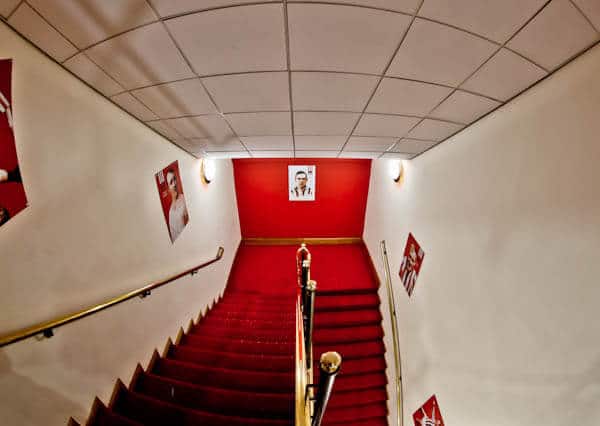 How well do you know the Sunderland players?  Lifelong fans will take a trip down memory lane on the players staircase.  Who is Sunderland’s most capped player?  Find out at the bottom of the staircase. 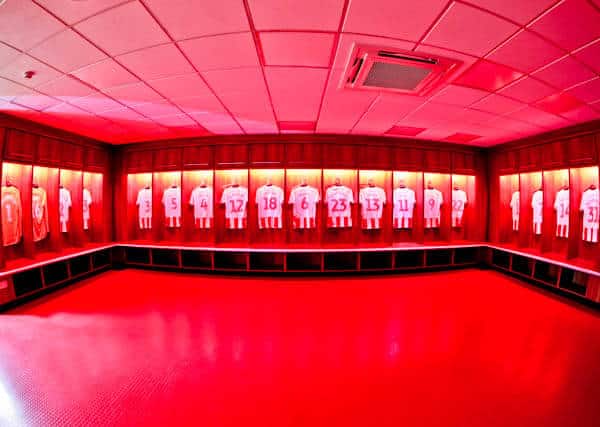 Sunderland have an impressive home team dressing room.  What’s more, the stadium tour guide will light it up red for you.  Perfect for making photos with your favorite players shirt.  The homeliness of this room is a world away from the away team dressing rooms! 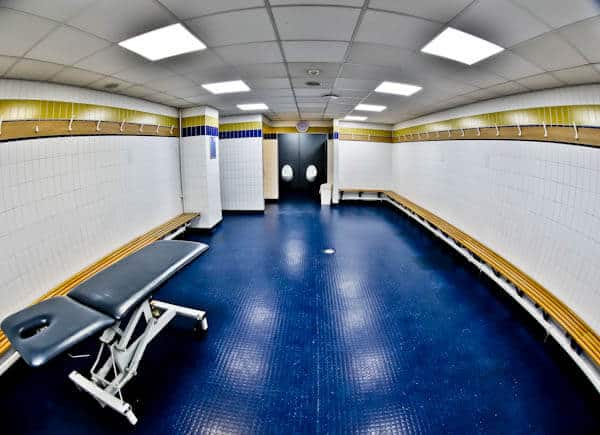 The away team dressing rooms are small, cold, uninspiring and with little facilities.  Welcome to the Stadium of Light. 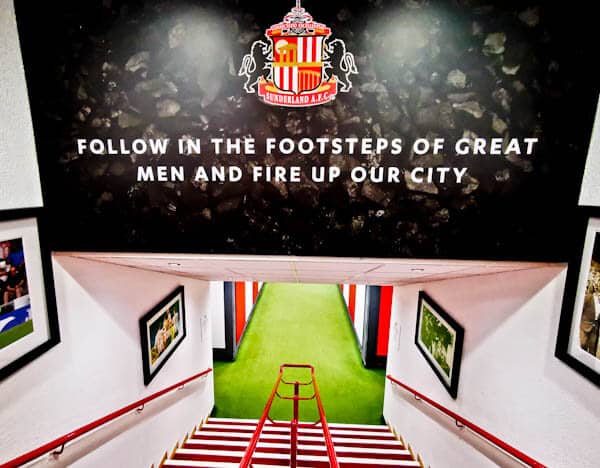 As you walk through the players tunnel there’s a significant message.  ‘Follow in the footsteps of great men and fire up our city’.  This refers to the coal industry which was in Sunderland.  As a matter of fact, look closely as the message is written on a picture of coal. 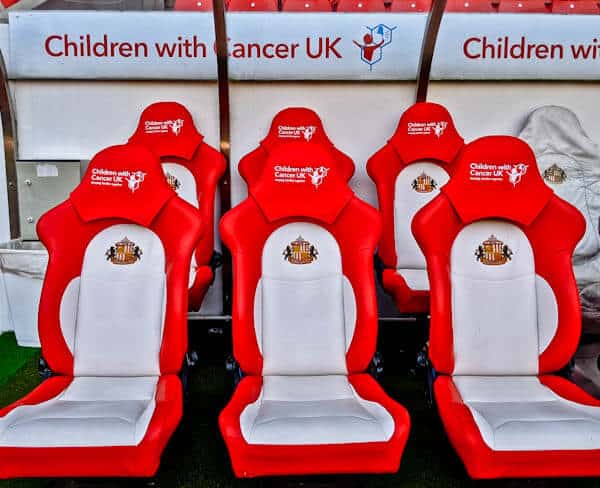 Sit in the car seats of the Sunderland dugout and pose for photos.  In addition, stand pitch side and take photos with the stadium itself as a backdrop. 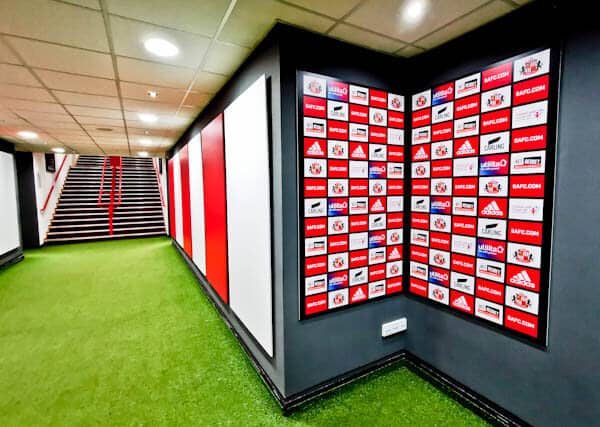 After the match you may see the players making interviews on TV.  You’ll pass the advertisement boards in the players tunnel.  Feel free to make a little video of yourself performing an interview. 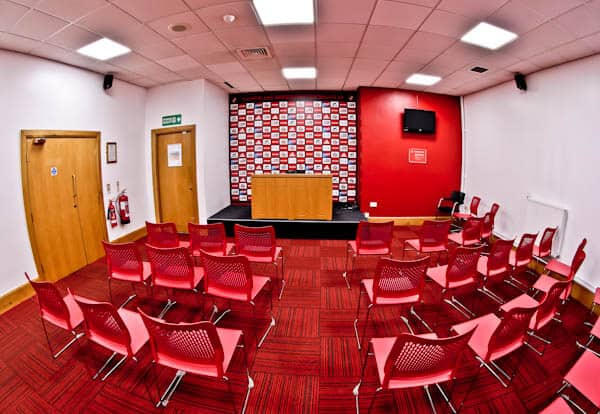 Another top photo spot at the Stadium of Light is the Press Room.  You’re welcome to sit in the managers chair and pose for photos. 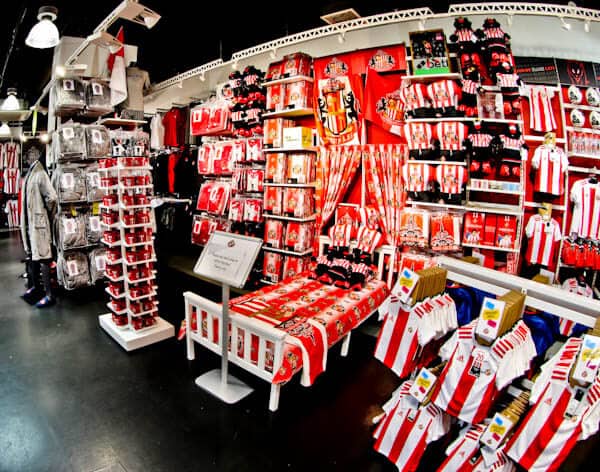 Enjoy the Stadium of Light stadium tour, it is in fact one of the best in the country.  There’s a lot of history in this part of England and this modern stadium presents it well.  Not only this but the tours are excellent value for money.  Check the official site to book your tour online or contact them for a private tour.

Visiting the North of England?  Check out St James’ Park in nearby Newcastle.  Did you know there is also a Stadium of Light in Lisbon?