Tabriz is the capital of the east Azerbaijan province of Iran.  In addition, it was a major stop on the ancient silk road.  Things to do in Tabriz Iran:

Often it’s better to visit Iran with a guide.  In fact, a guide is compulsory for visitors from UK, US and Canada.  If you are looking for an honest and knowledgeable guide please contact me and I’ll share details. 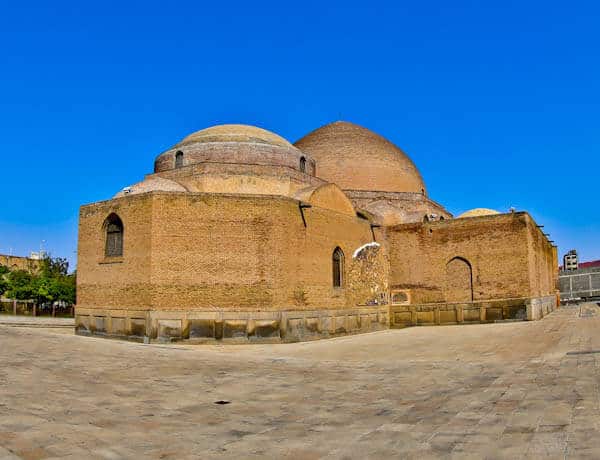 The Blue Mosque is a ruin and a shadow of what it once was.  Several earthquakes damaged the mosque throughout the years, in particular a strong 1780 earthquake.  However, reconstruction work has begun recently.  Personally, I’m happy to see it reconstructed in its original form as opposed to a newly built replica.  Moreover, it still retains a lot of it’s original blue and turquoise artwork which gives you an idea of its former glory.  The majority of mosques in Iran such as the Imam Reza Shrine are in immaculate condition therefore it’s good to see an older looking mosque. 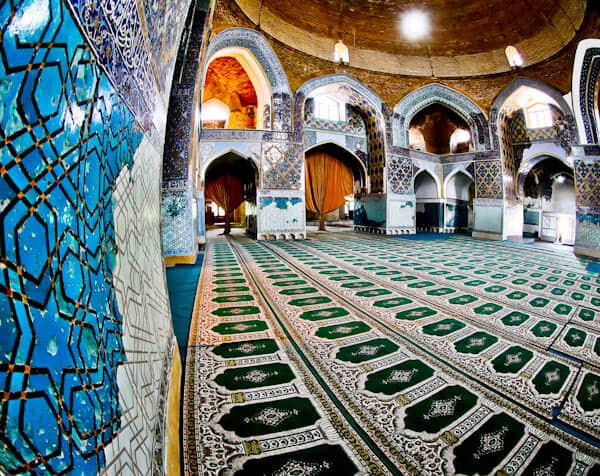 Once you pass through the impressive entrance gates, it’s time to go inside.  When you see the Blue Mosque interior you will now have a better understanding as to why it’s called the Blue Mosque.  Pay attention to the detailed tiles which were created by a famous calligrapher.  Of course, this is a religious building but for non religious visitors it has become a top Instagram spot in Tabriz Iran.  Especially, the vault corridors around the monument. 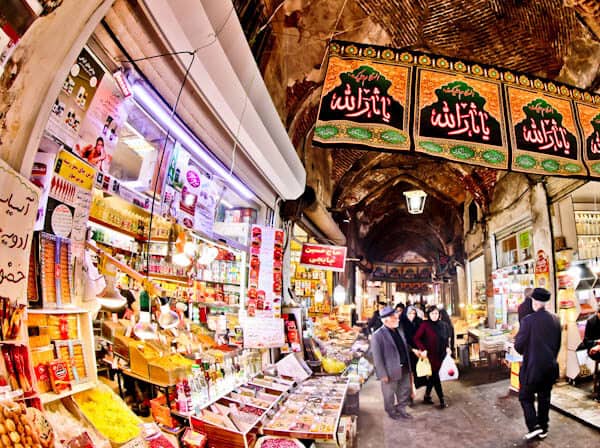 Tabriz is home to a UNESCO heritage site which is in fact the bazaar.  Of course, this was a major trading place on the ancient silk road.  Even the famous traveler, Marco Polo has passed through here.  What’s more, this is the largest covered bazaar in the world and puts the Grand Bazaar of Istanbul to shame – both on atmosphere and price!

Day of Ashura in Tabriz Iran 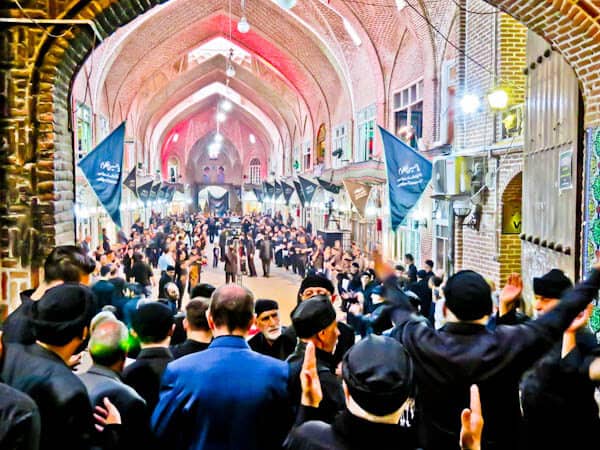 I was lucky enough to visit the Tabriz Bazaar during the Day of Ashura.  It marks the day when the grandson of the prophet Muhammad was martyred.  Throughout the day of Ashura many processions take place and several in the bazaar.  It’s said that taking part in a procession washes away your sins and their are certainly a lot of people taking part.  Additionally, food is given to everyone and you’ll see long lines of people waiting for food.  Interestingly, when they saw me, I was invited to the front of the line for food and welcomed to Iran. 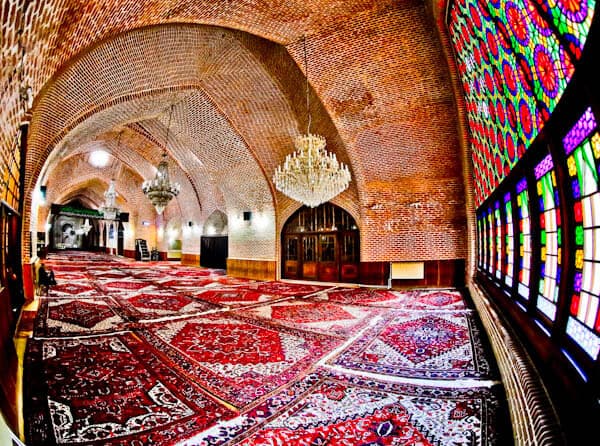 Tabriz is famous for the Blue Mosque but there is another stunning mosque you must visit.  It’s unknown when the Jameh mosque was built but Jameh translates to ‘old’ in English.  The interior is stunning as is the exterior.  Foreigners are welcome. 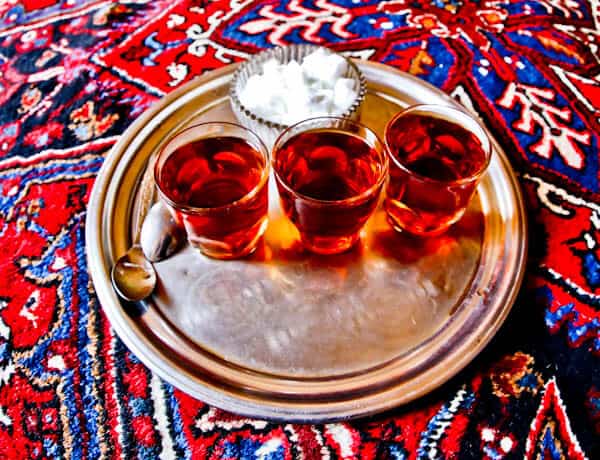 I was invited for an Iranian tea inside the Jameh mosque.  I can’t think of a more authentic place than sat on an Iranian rug to enjoy a hot Iranian tea. 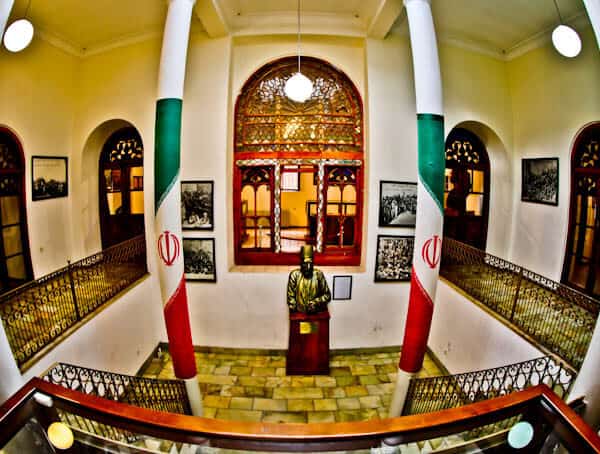 The first reason to visit the Constitutional House is to admire architecture from the Qajar Dynasty.  Secondly, you’ll learn about the Persian Constitutional Revolution which took place at the start of the 20th century.  Lastly, another interesting historic place in Tabriz Iran is the Azerbaijan Museum. 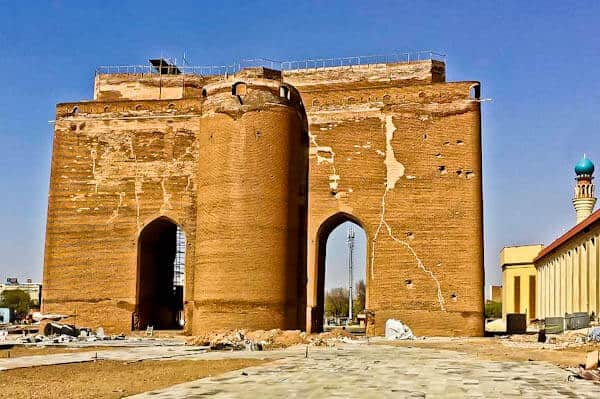 The Arg of Tabriz is what remains of a grand castle and mosque.  Throughout the years, it’s been severely damaged by both attacks and earthquakes.  It was built in the 8th century and in its prime featured a huge reflecting pool.  Today, there’s a new mosque beside it. 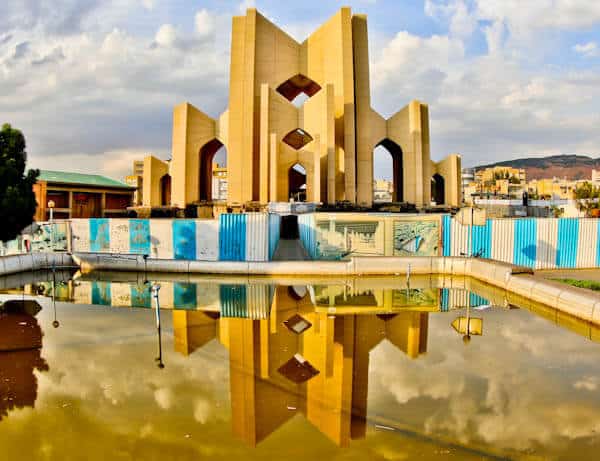 If the Arg of Tabriz used to feature a reflecting pool then the Mausoleum of Poets does today.  And what a stunning piece of architecture it is.  Tabriz Iran and the surrounding area is famous for poets.  Famous poets buried here include, Asadi Tusi, Khaqani, Qatran Tabrizi, Homam Tabrizi, Darvish and Master Shahriar.  If you’re into poetry from this area then the Mausoleum of Poets is a must. 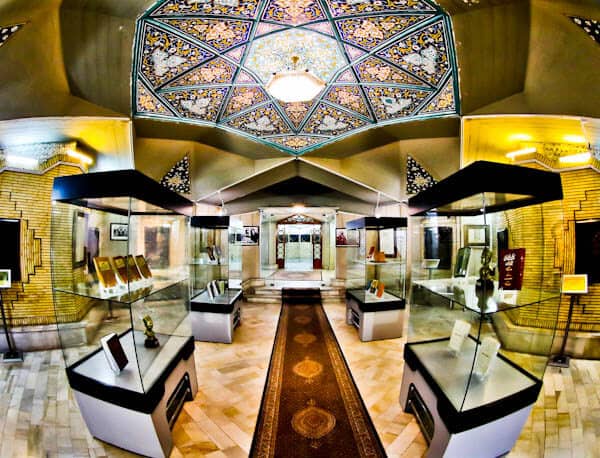 The interior features stunning displays of poetry.  In addition, there is also an army general buried here who has a shrine which contains Iranian flags. 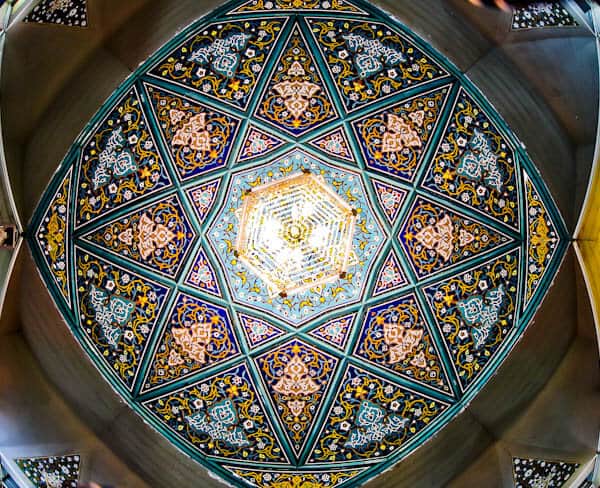 If you do not know or don’t have an interest in poetry it’s still worth visiting to admire the detailed architecture of this mausoleum. 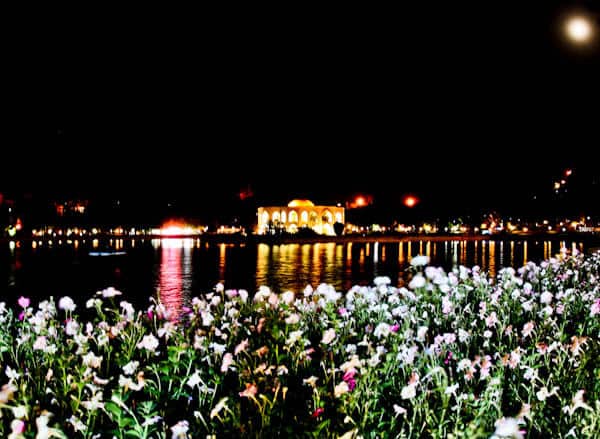 El Goli Building translates into English as the Lake of the People Building.  Essentially, it’s the centerpiece to the Lake of the People.  To view the man made lake and walk around the park warrants a visit to the park in itself.  That’s not to mention the panoramic views over Tabriz.  Inside the building is a restaurant. 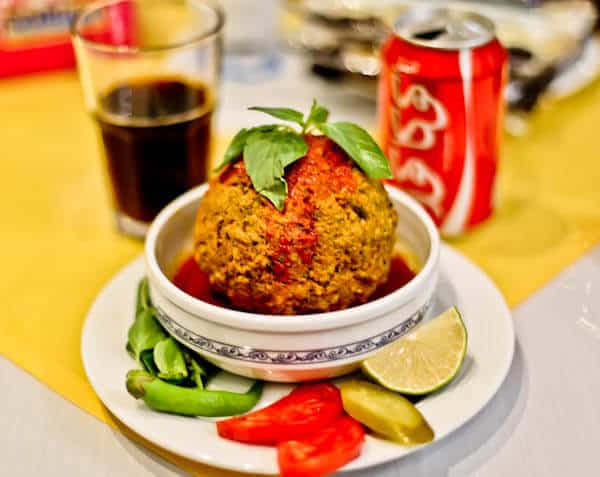 I have to say, the food in the El Goli restaurant is not the best in Iran.  None the less, you can’t beat the location or views over the lake.  The ice cold Coca Cola was good too! 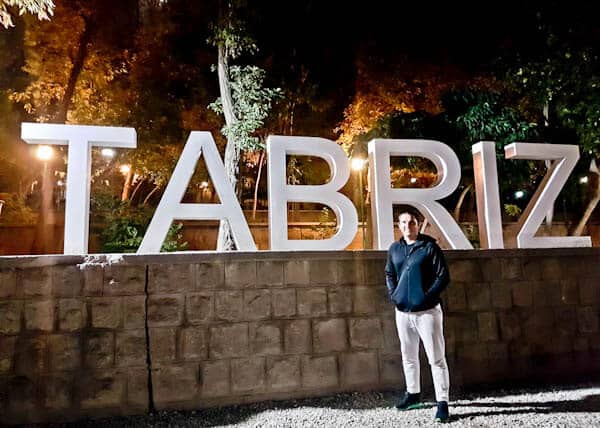 Many cities you visit today have their own sign and Tabriz is no different.  But where is the Tabriz sign?  Take your photo with the sign in the beautiful Lake of the People Park surrounding the El Goli Building. 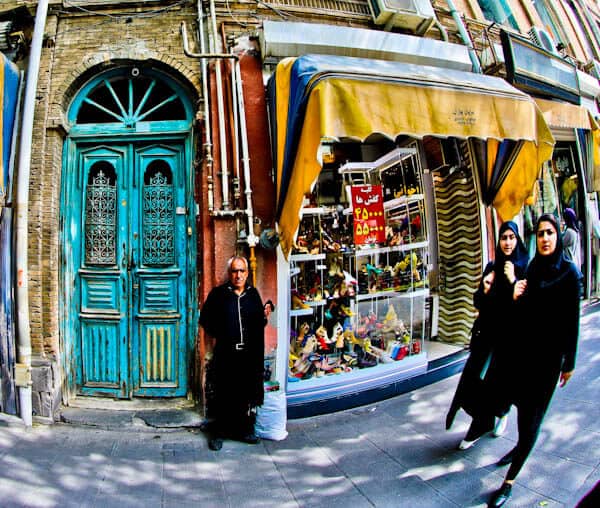 Walking the streets of Tabriz is a photographers dream.  Even more so if you’re into people photography.  What complements your street photography are the friendly people who will welcome you and often be happy to pose for photos.  Additionally, if you simply wish to wander and explore the streets, Tabriz is huge and full of both history and color. 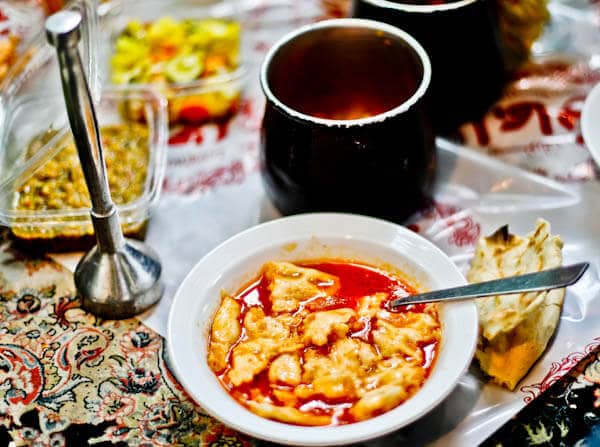 An Abgoosht (Iranian Stew) meal in Iran is a must but what is it?  Firstly, you break up the lavasha (Assyrian bread) and place it in your soup.  Secondly, you mash up the meat in the cup with the equipment provided.  Lastly, you enjoy this meal with friends.  Altogether, the ingredients include; beef (or lamb), kidney beans, chickpeas, lime broth, potatoes and onions.  Interesting drink options include a variation of flavored non alcoholic beers. 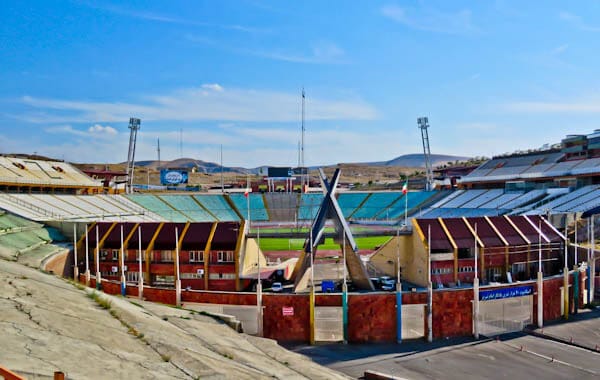 Iranian football is relatively unknown in the western world.  If you read about their stadiums, they do in fact have some of the biggest in the world.  As a matter of fact, Tractor Club stadium has a capacity of 70,000.  If this was a Premier League stadium it would be the second largest only behind Old Trafford.  Check the fixtures when you’re in Tabriz and see if Tractor Club FC are playing. 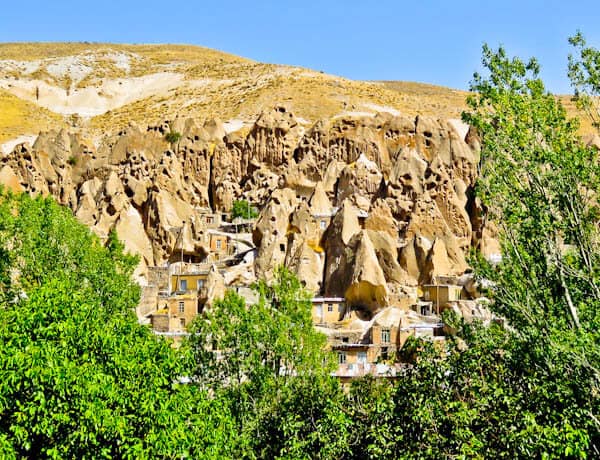 Adjacent to Tabriz Iran is the small town of Kandovan.  Kandovan is made up of caves as well as unique man made cliff dwellings.  As a result, it’s a photographers dream.  It somewhat resembles, Goreme Turkey but of course without the tourists.  Enjoy walking these photogenic streets alone! 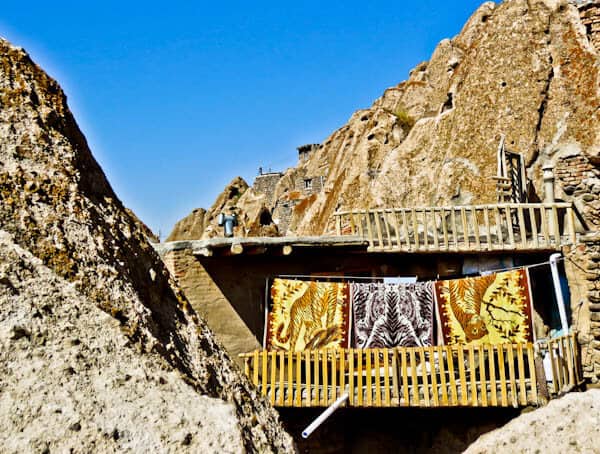 As you explore Kandovan you’ll pass a few souvenir shops.  But, as well as these you’ll see people going about their daily business.  Many are simply inhabiting these unique dwellings.  As a matter of fact, it has a feeling of something from a Star Wars movie! 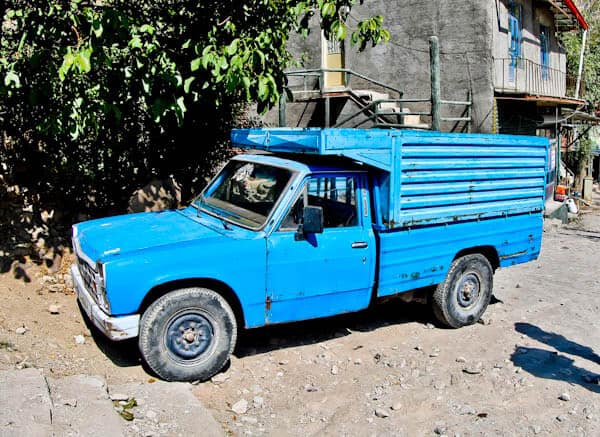 A famous type of vehicle from Iran is the Zamyad Co.  For me, these are better described as a classic Iranian blue truck.  Don’t overlook these when you explore not only Kandovan but the whole of Iran.

Travel from Tabriz to Zanjan 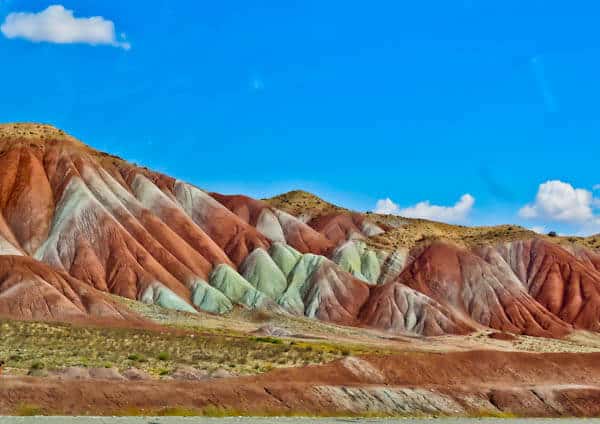