Visit Accra, the capital of Ghana.  Here are a few things to do in Accra with original Accra Ghana photography from 2020. 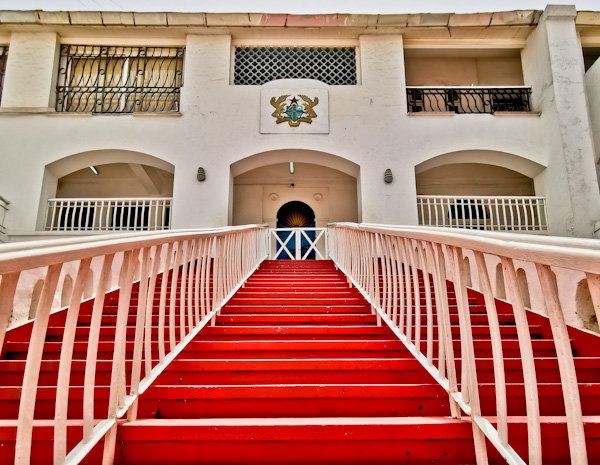 Visit the Office of a Former Dictator 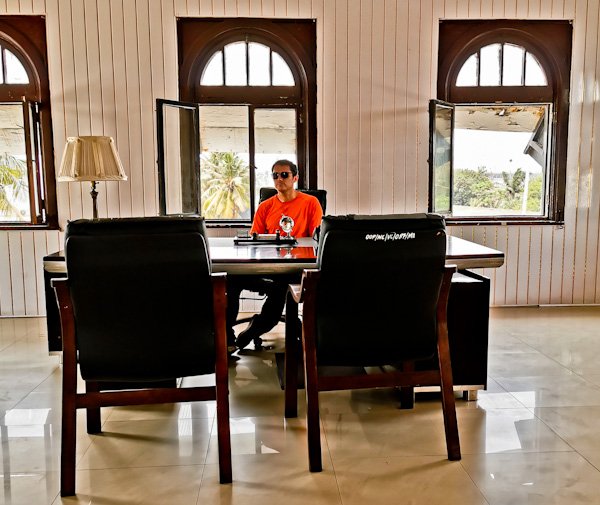 Today, Osu Castle is the home of the Ghanaian government.  Of course, you cannot enter parliament but you’ll be subject to a security check when you enter the compound.  For whatever reason, as you tour Osu Castle you’ll be invited into the former office of Jerry John Rawlings.  As a matter of fact, his office has been preserved in his honor.  Finally, take a look out of the window for views over central Ghana, this is why Jerry John Rawlings chose his office in this specific part of the castle.

Take a Ride in a Dictator’s Personalized Vehicle 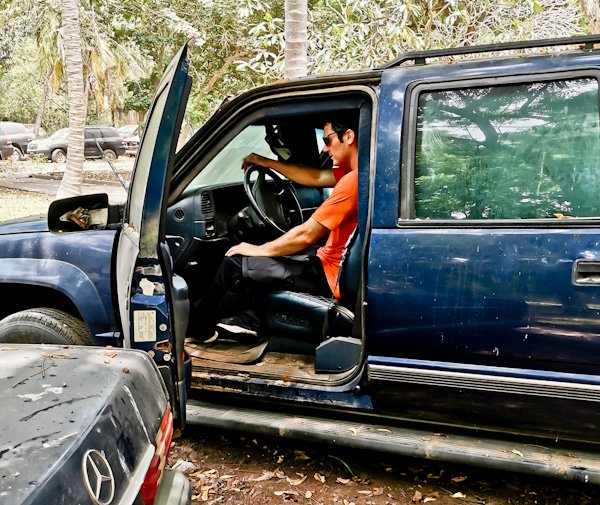 In the Osu Castle gardens are a selection of abandoned government vehicles.  Of course, it was the customized Chevrolet Suburban of former leader Jerry John Rawlings that caught my eye.  Did you know that in Monrovia Liberia you can view the customized SUV of former dictator Charles Taylor? 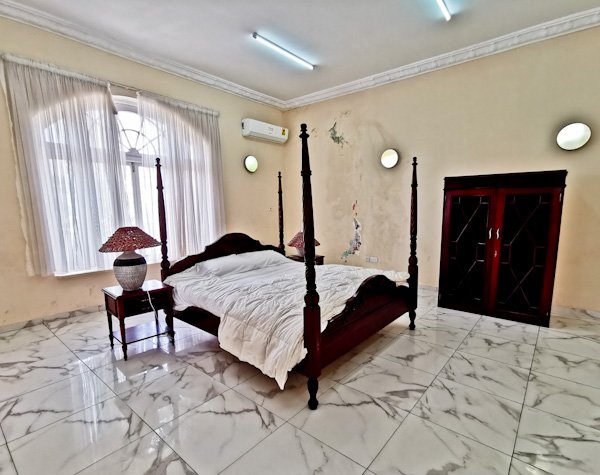 In 1961, Queen Elizabeth II famously visited Ghana.  The room she stayed in has been perfectly preserved to this day (with the addition of an air conditioning unit).  I was informed that the bedding is the same and cleaned regularly.  No doubt, her majesty is welcome back in Ghana anytime.  Ask your guide in Osu Castle to see this room. 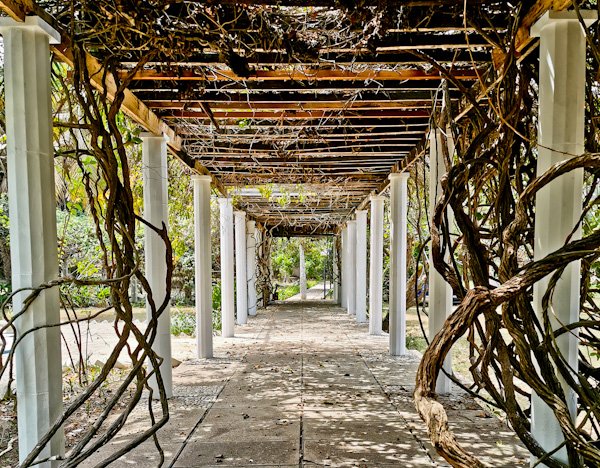 Osu Castle features a well maintained garden area.  As African leaders have visited Ghana over the years, trees have been planted here in their honor.  The guide was keen to show me the tree planted in Nelson Mandela’s honor.  Which shows as you walk around the gardens that you’re walking in Nelson Mandela’s footsteps.  When I asked the guide if there was a tree planted for Robert Mugabe he told me there was but he wouldn’t tell me which one. 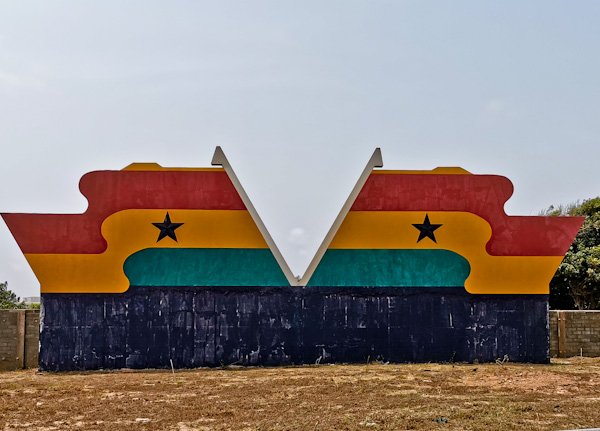 Visit Asomdwe Park to take your picture in front of the iconic Ghana flag.  In fact, this park is the final resting place of former Ghanaian president, John Evans Atta Mills. 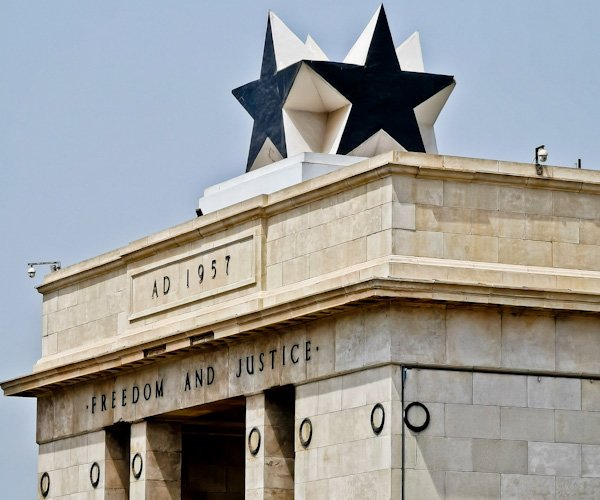 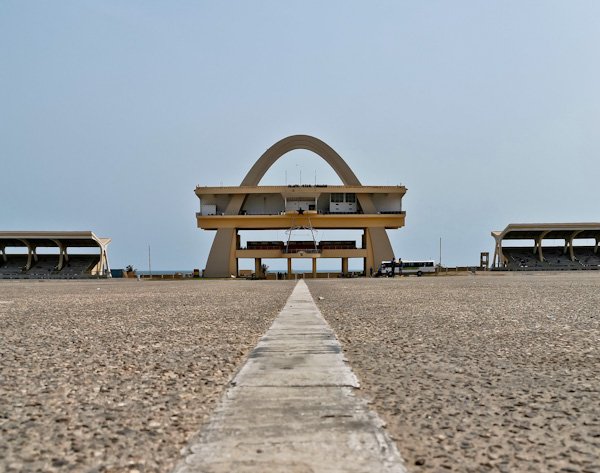 Accra is home to the second largest town square in the world after Beijing, China.  Another notable large town square is the Zocalo in Mexico City. 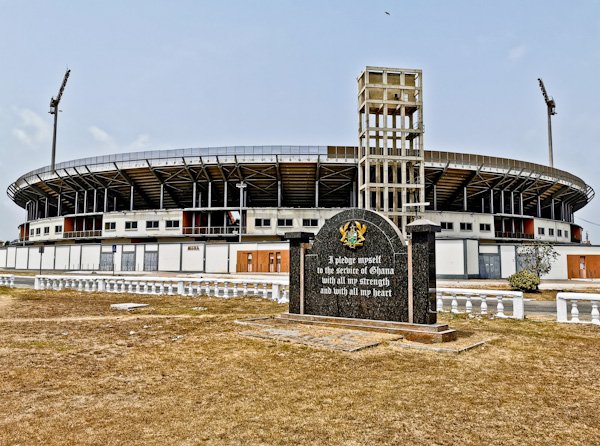 If you wish to watch a football match when in Accra then check the football schedule.  Accra Sports Stadium is home to Hearts of Oak, Great Olympics as well as Legon Cities FC.  What’s more the Ghana national team also play their home games here.  Michael Essian of Chelsea and Tony Yeboah of Leeds United are famous Ghanaian footballers. 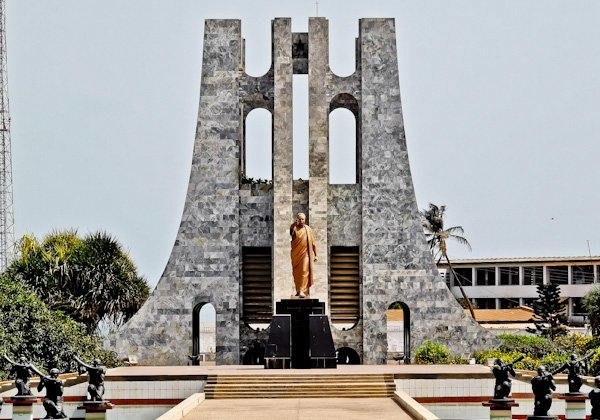 Kwame Nkrumah was the first president of Ghana and a huge park was created in his honor.  In fact, this is where both his body as well as that of his wife now lie.  The park is well kept and perhaps the most beautiful in Ghana.  An interesting fact is the park was created a former polo field used by the British in colonial times. 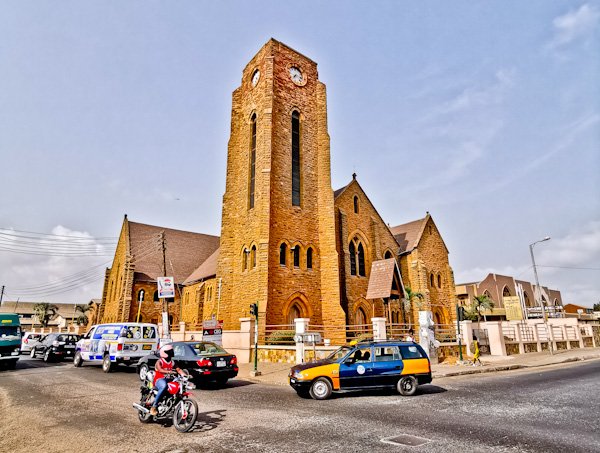 Jamestown is the historic center of Accra.  When Accra replaced Cape Coast as the capital of Ghana at the end of the nineteenth century, Jamestown boomed.  However, today it’s a run down area which needs a little imagination to see how it once was.  As you walk the streets of Jamestown you’ll see lots of British colonial era buildings. 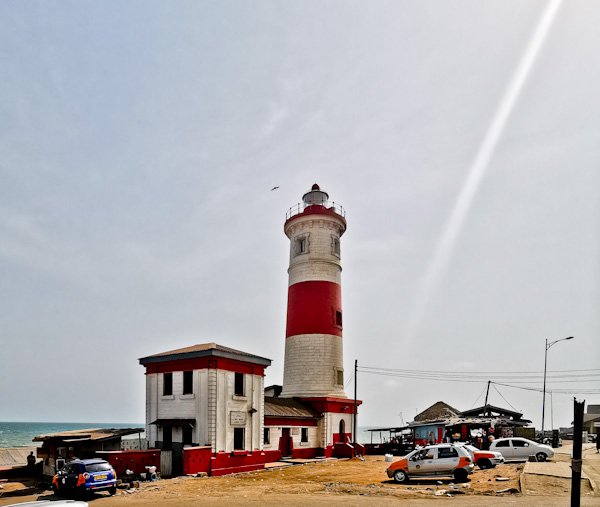 Jamestown lighthouse is the iconic landmark of Accra.  At first glance, it appears to be surrounded by hecklers and garbage.  But take a closer look and you’ll see the harbor surrounded by fishermen going about their daily work.  The lighthouse is 28 meters tall. 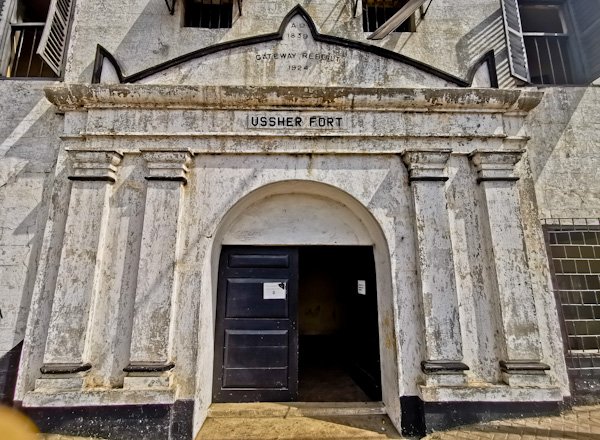 Ussher Fort is an abandoned fort in Jamestown.  It was originally built by the Dutch during the 17th century.  Why did the Dutch build Ussher Fort?  To protect it’s territory from other European invaders such as the British.  Finally, the fort is in a state of disrepair so you cannot officially visit today.  However, with the help of UNESCO, Ussher Fort is being restored as a museum.  Until then, to get an idea of the Dutch brutality during this period, visit Elmina Castle. 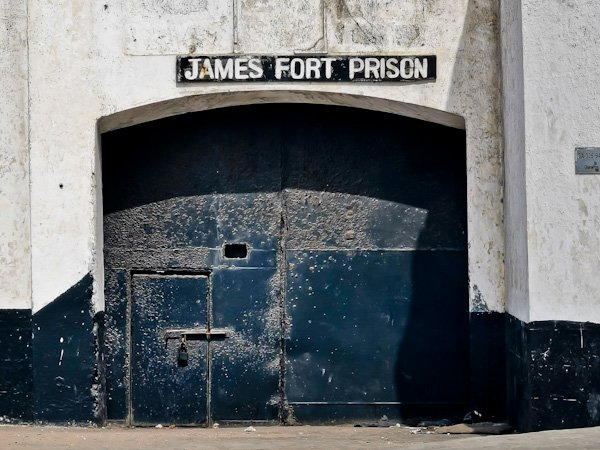 Fort James was built by the British at the end of 17th century but why?  To trade gold and slaves.  The British and Europeans were stealing anything of value from Ghana for centuries.  It is named after King James II of England.  When the British left, the fort became a prison which it was until 2008.  Today, it’s locked up and you cannot sneak in like you can with the nearby Ussher Fort. 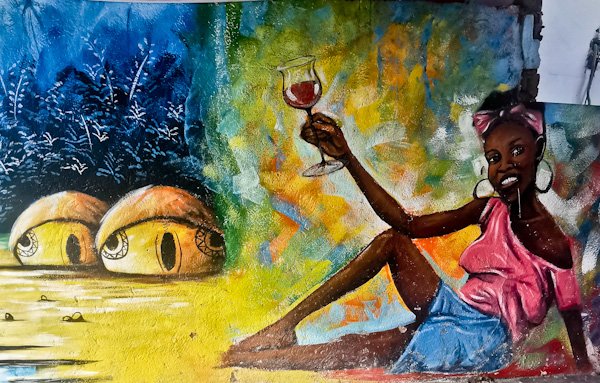 As you explore Accra, keep your eyes open for street art.  African street art seems to be more colorful than the rest of the world. 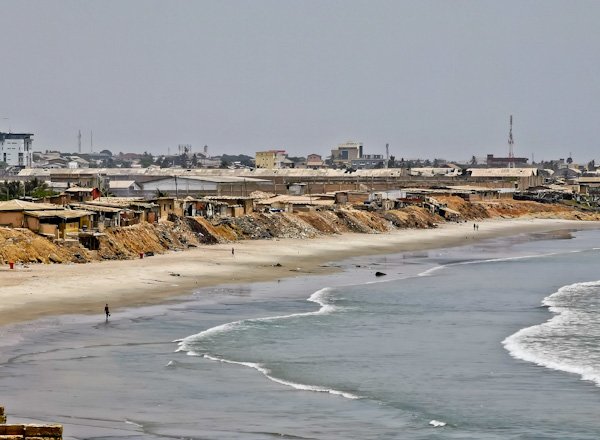 The most popular beach in Accra is Labadi Beach.  However, venture a little further out of town to discover Bojo Beach. 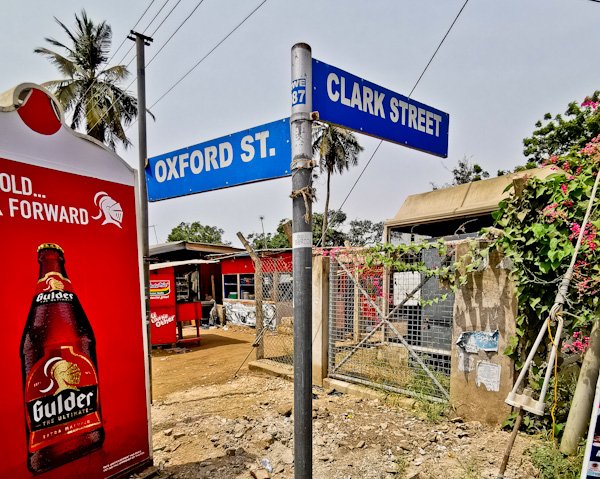 Of course, Ghana is a former British Colony.  This is evident through the buildings and language as well as the street names.  As a matter of fact, you can find Oxford Street, Kings Street, Castle Road and several other street names which are common in Britain.

How to Travel from Accra to Lome by Land

Firstly, you must take a bus from Accra to Aflao where you can cross the Ghana Togo border.  Direct share minivans leave when full from the STC Tudu Bus Station which is near the Kwame Nkrumah Memorial Park.  The journey to the Togo border takes around 4 hours and costs around $3.  Once at the border, exit Ghana, enter Togo and find a taxi to Lome which should cost around $4-$6.  Finally, you can get a visa on arrival at Togo but this is limited to 7 days therefore consider getting your visa in advance if you plan to stay longer.