Things to do in Bratislava + Sky Blue Church

Bratislava is the capital city of Slovakia and located beside the Danube river.  Things to do in Bratislava include.

Hotels in Bratislava are very good value, you’ll find your favorite hotel chain here at a lower price than other major cities. 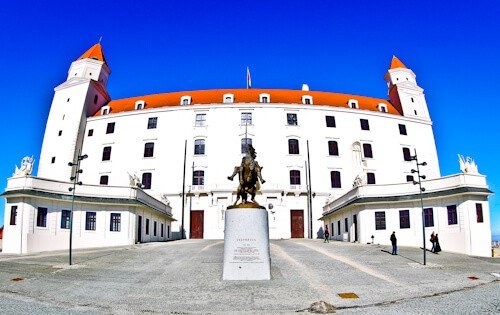 You’ll see Bratislava Castle when you first arrive in Bratislava as it’s located on top of Castle Hill.  Castle Hill is 85 meters tall which makes it a short and steep walk from the center.  From the top of Castle Hill not only can you visit the castle but you get a wonderful view over the old town and River Danube.  On clear days it’s possible to see Austria and as far as Hungary.

Although Bratislava Castle dates back to the 9th century it has been heavily restored and looks new.  It’s free to climb the hill and explore the grounds but you must pay a few Euros to enter. 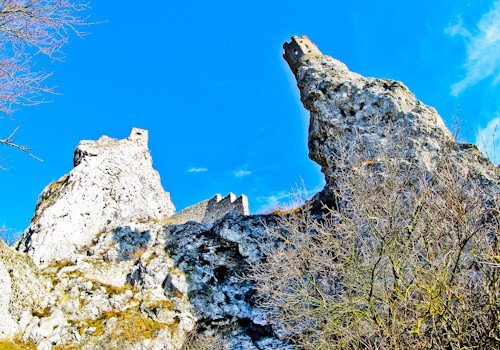 Located in Devin which is a short bus ride from central Bratislava is Devin Castle.  Devin Castle, like Bratislava Castle dates back to the 9th century but Devin Castle has not been restored giving you the true castle experience.  The castle is located next to the Danube river which is the border with Austria.  It is built on a cliff which is 212 meters high, perfect for controlling the area.  Finally, the most photographed part of the castle is the small watch tower (above). 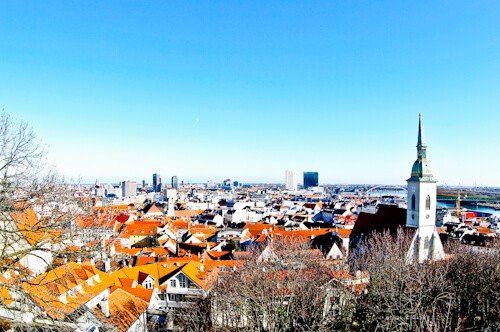 When you look over the city of Bratislava from Bratislava Castle hill, the  most prominent building is the St. Martin’s Cathedral (above right). St. Martin’s is the tallest cathedral in Bratislava and is the same height as Castle hill at 85 meters tall.  The cathedral dates back to the 15th century.  In addition, the best place to photograph it is either from the castle or facing its facade from the other side of the road. 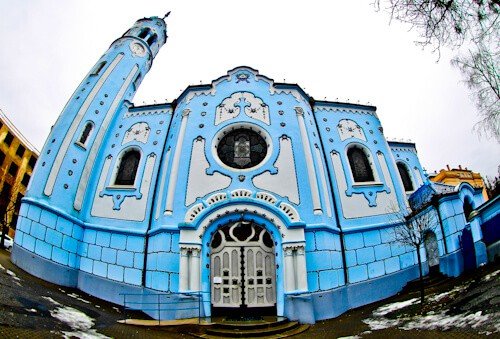 A short walk from old town is the Church of St. Elisabeth which is more commonly known as the Blue Church.  You can guess why it’s called the Blue Church by looking at it (above).  The interior of the church features a lot blue as the exterior does, the tower is 36 meters tall.  It’s located in a residential area and surrounded by parked cars and fences making it difficult to photograph.  Of all the things to do in Bratislava, the blue church is the best Instagram spot. 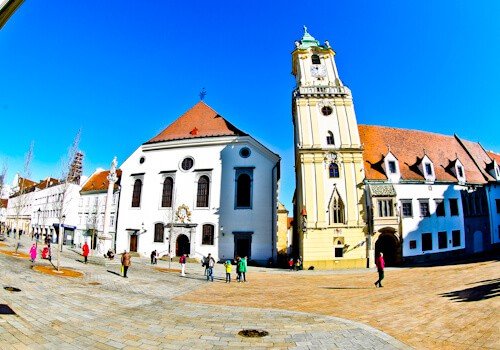 Located behind the Old Town Hall is the Bratislava City Museum (through the small alley).  Roland Fountain is also located on the plaza which is the center of Old Town.  Around the central area are lots of cafes and souvenir shops.  Bratislava is the 4th cheapest place in Europe for beer with an average price of a beer being about a dollar.  You’ll find lots of bars all over Bratislava to sample a few beers.  Something else scattered around the town are lots of amusing statues.  These Instagrammable statues are a new addition to the city.


Things to do in Bratislava – Michael’s Gate 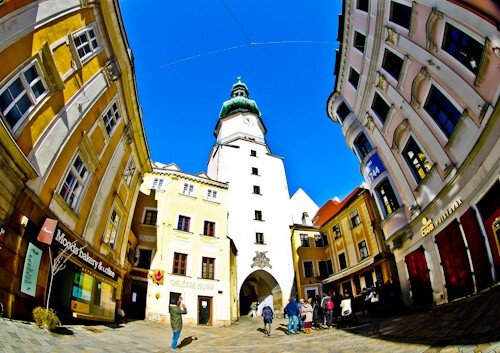 Michael’s Gate is the last remaining gate of the city walls of Bratislava.  Originally there were 4 gates which were the only way to enter and exit the city.  The remaining gate dates back to the Medieval Times of the 14 century.  It was reconstructed in the 18th century and is now Baroque style.  Nowadays it’s one of the most photographed buildings in the city.  There are many cafes located around the gate if you you feel the need for an overpriced refreshment. 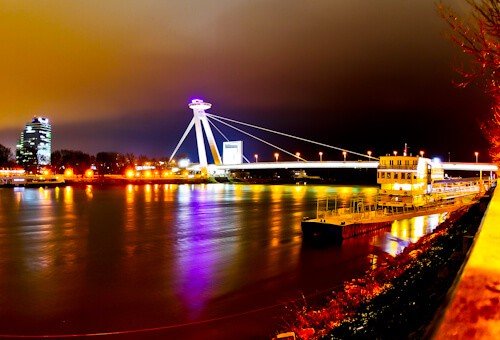 Passing over the Danube River are several bridges.  The world’s longest cable-stayed bridge (above, bottom right) is known as the UFO Bridge.  There is a UFO, flying saucer shaped restaurant on top of the structure.  The UFO is 85 meters high, the same height as St. Martin’s Cathedral and Castle Hill.  Inside the UFO is a restaurant offering views of Bratislava, The Danube and the castle.  Another bridge further down is known as Old Bridge or Stary Most in Slovakian.  This used to be the oldest bridge in Slovakia until it was replaced in 2015.  It is used by pedestrians, bikers and trams whereas the UFO bridge is a motorway. 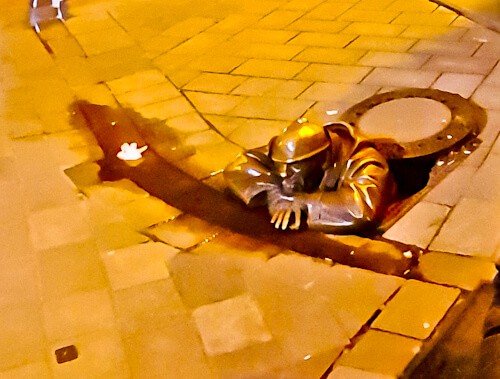 As you walk around old town Bratislava, you’ll see several interesting sculptures.  The most famous of these is the Man at Work sculpture, as a result there’ll be a line of people waiting to take a photograph with it.  As a matter of fact, one of the top things to do in Bratislava is photograph the various sculpture throughout old town Bratislava. 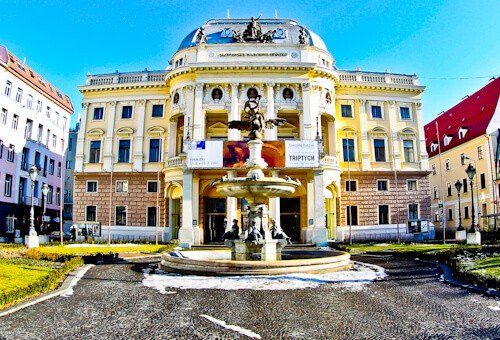 In the Old Town you’ll find the Historical building of the Slovak National Theater.  The building was completed in 1886 but has now been superseded by a modern National Theater which opened in 2007.  Both theaters are still hosting opera however, I thought this was the most beautiful building in the city. 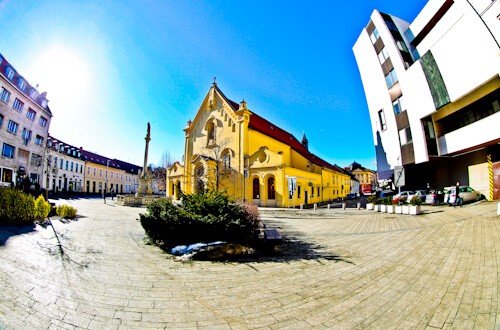 In the old Town of Bratislava you can find many churches.  There is the Franciscan church which is the oldest in the old town dating back to 1297.  There is the Trinitarian Church was completed in the 18th century.  The Trinitarian is a difficult church to photograph as there are several telephone wires in front of it.  The second most Instagrammable church in Bratislava is the lesser known Church of St Stephen (above).  Of course, the blue church is the best Bratislava Instagram spot!

How to get from Bratislava to Budapest by bus 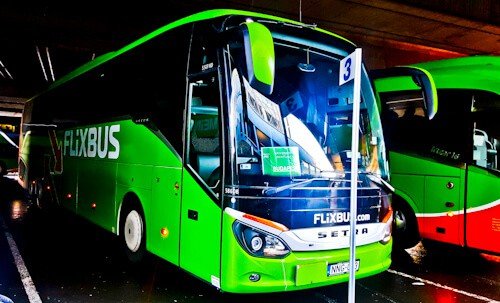 The best way to get from Bratislava to Budapest is with Flixbux which takes less than 3 hours and costs around $20.  The bus station is located in the center of the city under the UFO bridge.  As always with Flixbus you get your own charger, free WiFi in addition to plenty of legroom.