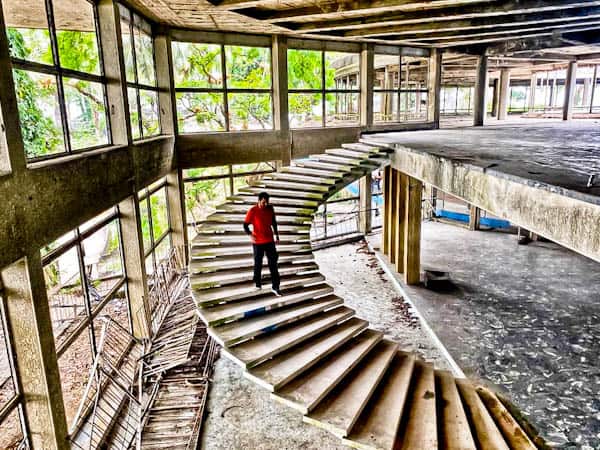 The Ducor Intercontinental Hotel used to be one of the few five star hotels in West Africa.  As a matter of fact, several infamous African dictators have stayed here in the past.  After years of civil war in Liberia it now lies an abandoned eyesore.  However, that doesn’t mean you can’t enter and ascend to the top for panoramic city views.  What’s more, you can take wonderful Instagram shots walking through the abandoned building.  Read about the Ducor Hotel on my travel blog. 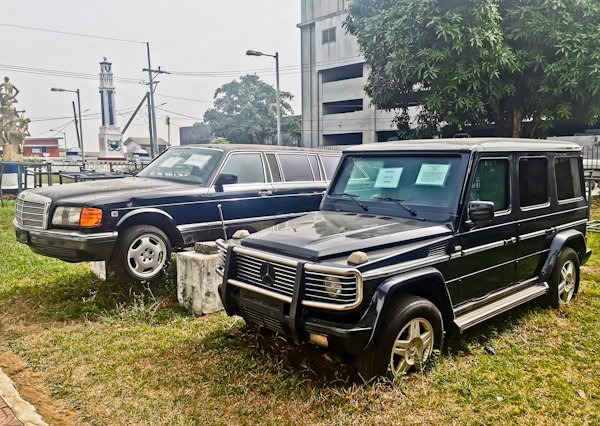 It’s hard to believe that President Charles Taylor’s SUV still exists today.  His special order, bullet proof, customized Mercedes Benz G Class is on display outside the Centennial Pavilion on Broad Street.  Have a look inside and it looks like something from an old Bond movie. 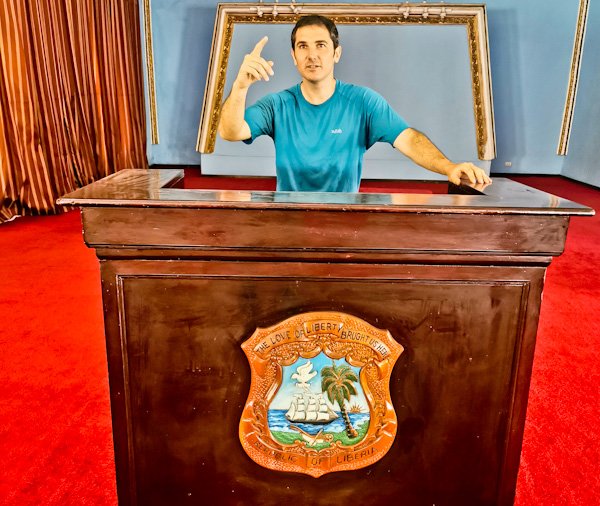 When a new President is inaugurated it happens at the Centennial Pavilion.  Unfortunately, there is no official tour but you can ask security at the main entrance if a private tour is possible for a small tip.  Once inside you can stand where the president stands during his / her inauguration. 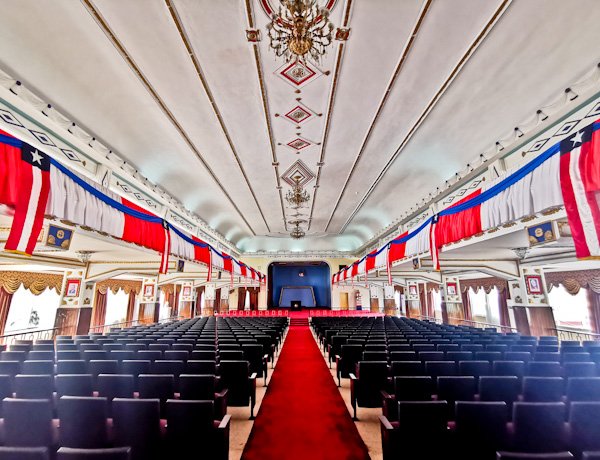 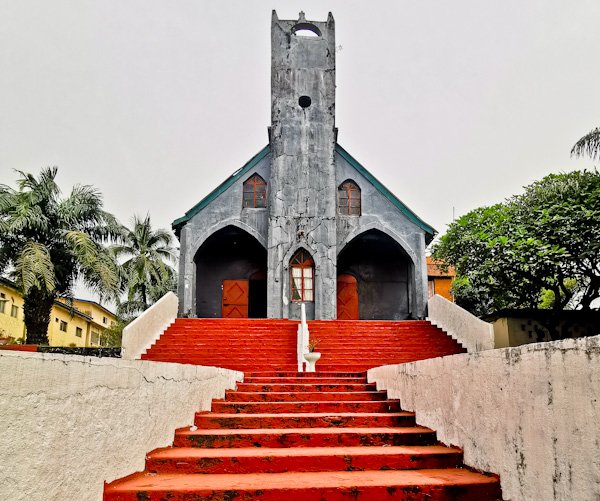 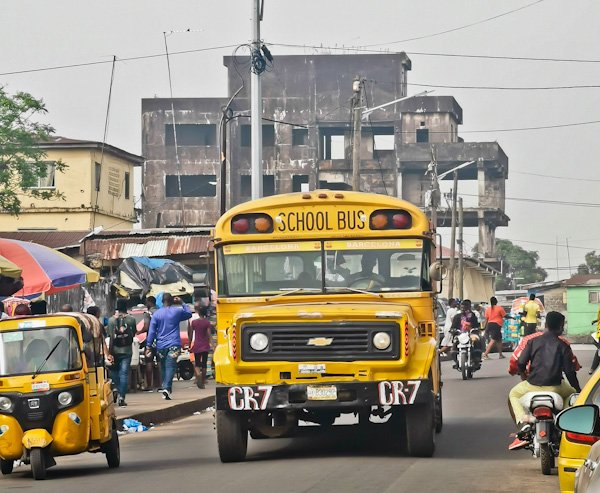 As you walk the streets of Monrovia Liberia you’ll see several huge eyesores.  A consequence of the recent civil war. 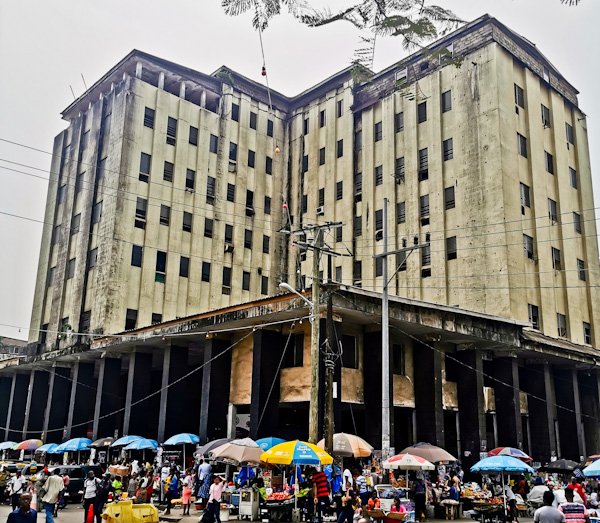 I would say it’s harder not to see abandoned bullet hole filled buildings in central Monrovia than it is to see them! 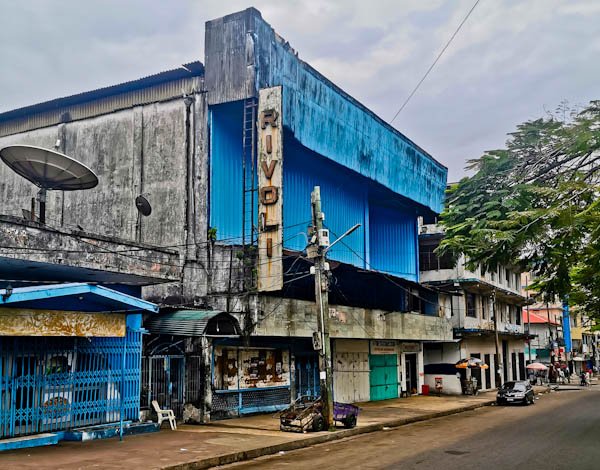 The abandoned Rivoli Cinema certainly catches your eye.  On closer inspection you can still see flyers and showings from right before it was closed down.

Even Wars Have Limits Memorial 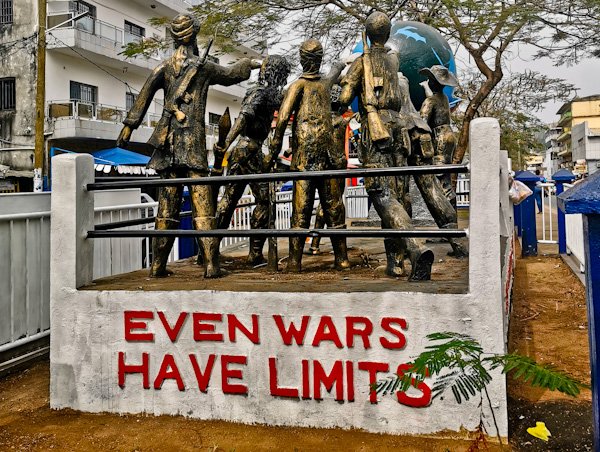 The Even Wars Have Limits memorial has more significance considering Liberia’s recent and earlier history. 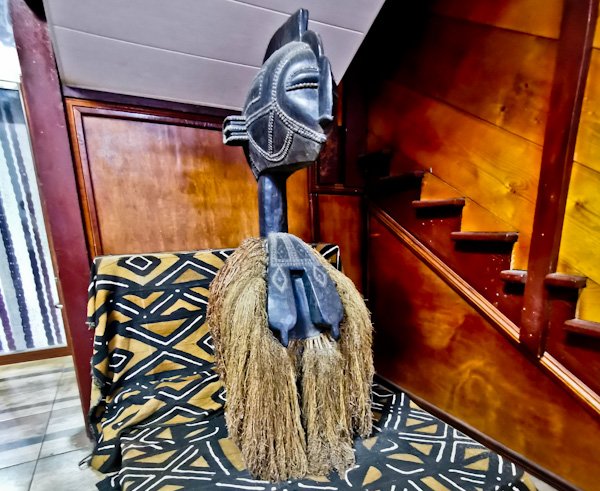 Visit the National Museum of Liberia to learn all about the history of Liberia.  To start with you can view a small collection of African masks from the region.  Following this, there are displays about the period of colonization, followed by the return of freed slaves to African.  Lastly, you’ll learn about independence, the civil wars as well as each of Liberia’s presidents.  Read about my visit to the National Museum of Liberia on my Travel Blog. 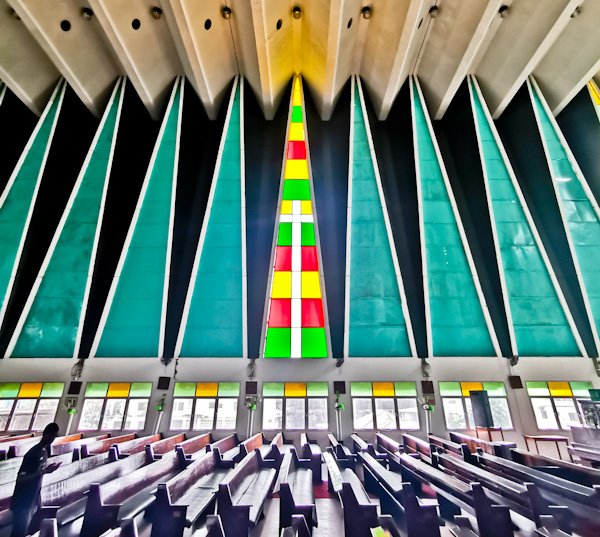 One building which grabs your attention in the Monrovia skyline is the Episcopal Church.  It’s worth visiting the interior to see the unique architecture and last remaining stained glass window. 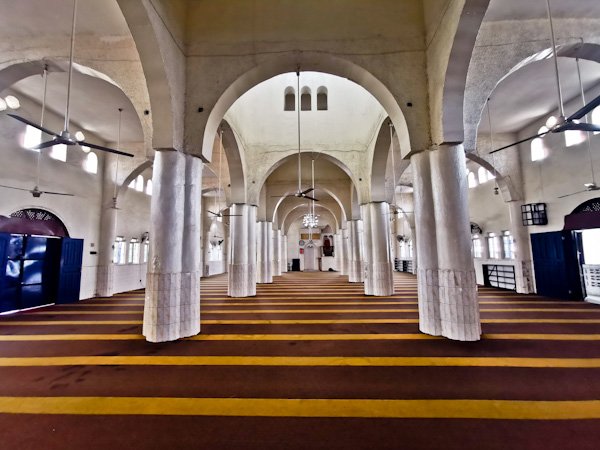 There are a few mosques throughout central Monrovia.  Firstly, the Central Mosque on Benson Street.  However, I visited Newport Mosque on Newport Street.  Note, the very American street names! 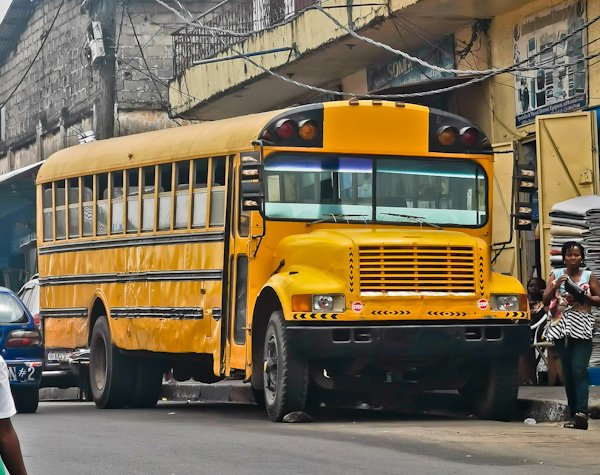 Do you want to transport yourself back to your school days?  Ride on an old American school bus.  Who knows, maybe it’s the one from your school? 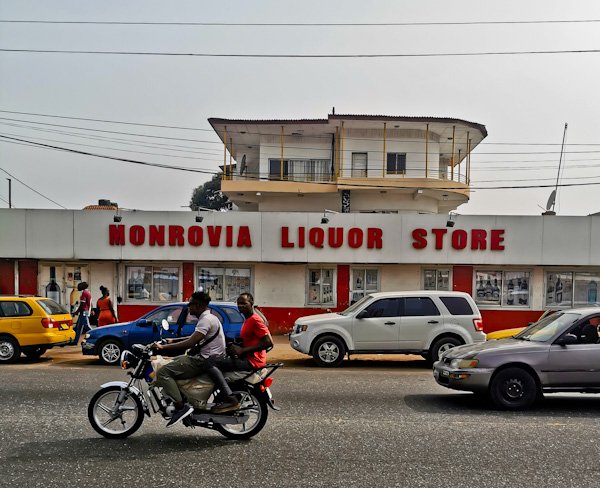 You find Liquor Stores all over the US.  If you’ve never been to the US then I’m sure you’ve seen a Liquor Store in an American movie.  This American influence made its way over to Liberia! 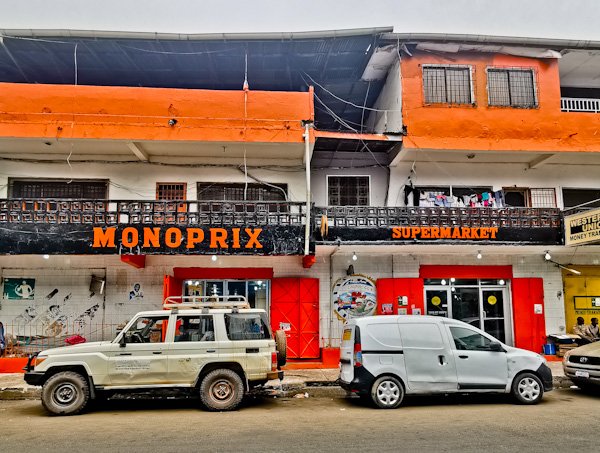 Monoprix Supermarket is run by North Africans in the center of Monrovia.  Not an American but a French influence.  Nonetheless, it’s one of the best value supermarkets in the city. 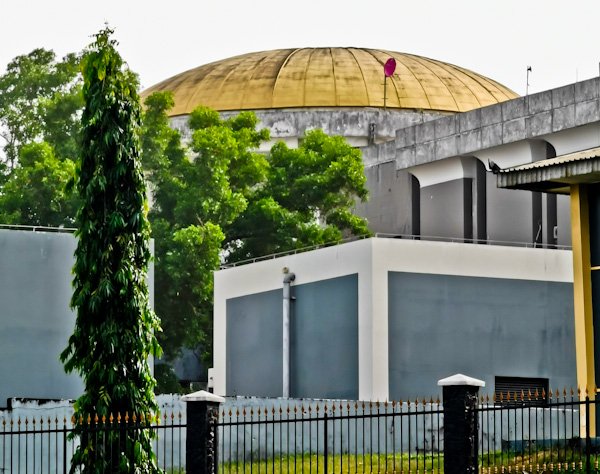 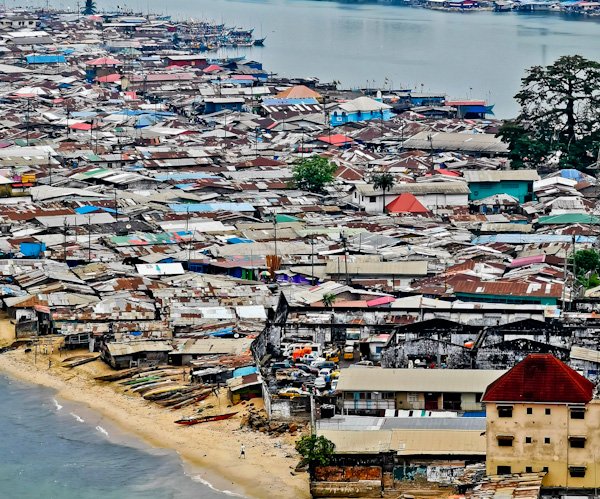 West Point Slum is a small peninsula in Monrovia.  It’s one of the most densely populated places in West Africa and home to around 80,000 people.  Nonetheless, there’s still space for a cotton tree.  A symbol of returning slaves from the Americas.  The most famous cotton tree is of course in neighboring Freetown, Sierra Leone. 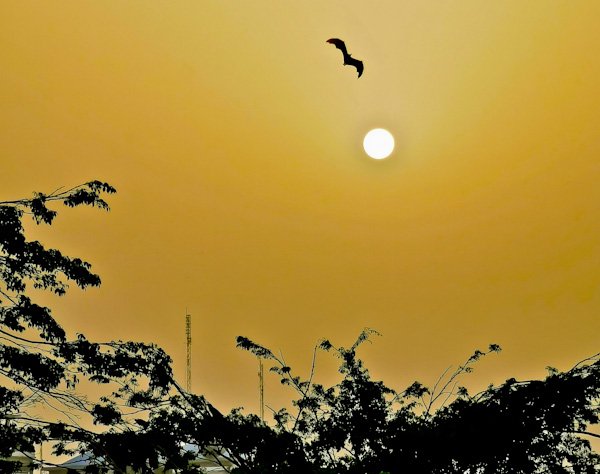 Lots of bats inhabit Providence Island therefore you can take a wonderful sunset photo from here.  The bridge which crosses the island is the safest place to take one for.  However, don’t hang around too long after the sun goes down! 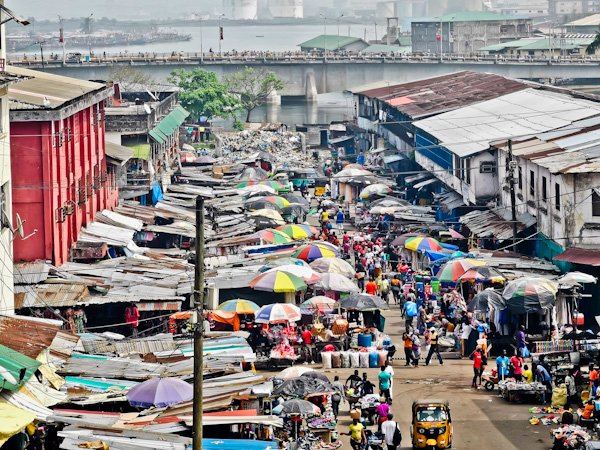 Waterside Market is the most famous market in Monrovia Liberia.  Here, you’ll find thousands of stores selling everything and of course, thousands of people.  As I’m not a fan of busy markets, I decided to simply watch the chaos from a peaceful bridge which crosses over it. 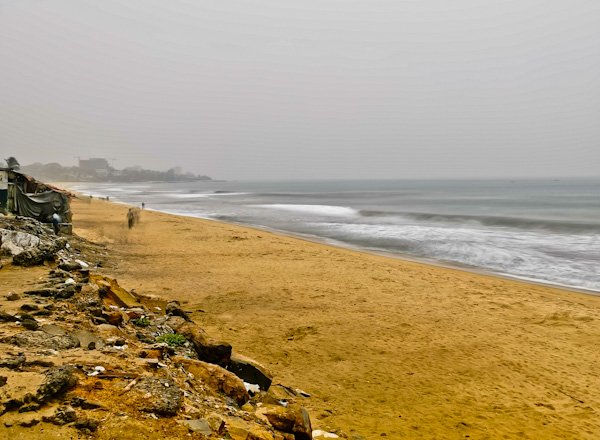 Monrovia is an extremely polluted city which is also full of garbage and plastic.  For this reason, expect to find garbage on the beaches.  Nonetheless, there are plenty of beaches surrounding the city, often right next to slums. 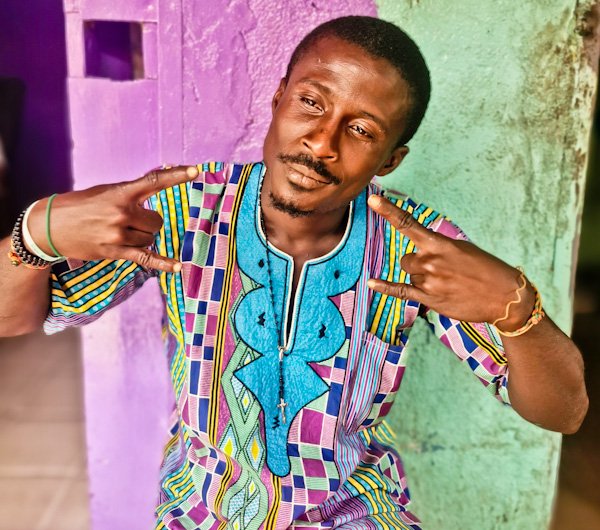 The locals in Monrovia are extremely friendly.  In fact, you may hear what could be described as a Southern US accent from some of them.  Once you start talking to the locals and they see you have a camera, it’s highly likely they’ll ask you to take their photo.  On the other hand, don’t take pictures of locals until they’ve give you permission.

What to Eat in Monrovia? Local Food 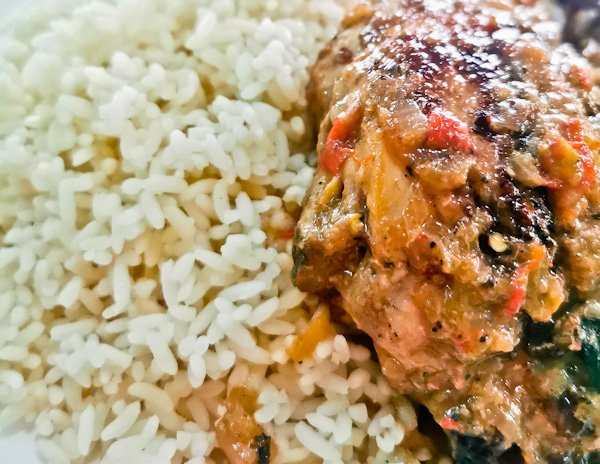 When I’m traveling through West Africa I’m always on the lookout of a good chicken and rice, washed down with a fruit juice.  And you should too!  This gives you the energy required to travel through this part of the world.  In central Monrovia there are plenty of restaurants which serve freshly prepared, delicious chicken.

What to Eat in Monrovia? Western Food 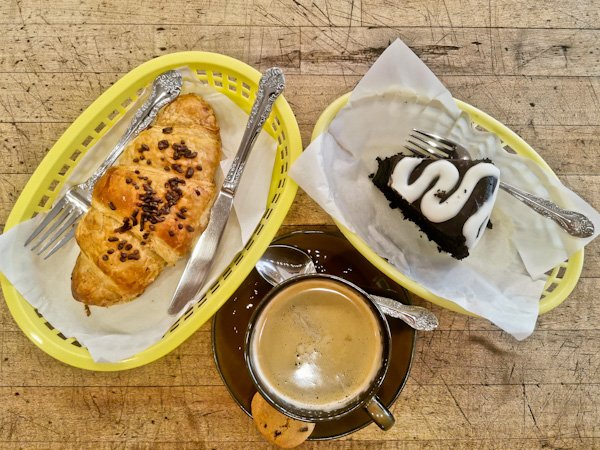 There seem to be 2 different worlds in Monrovia.  The world which use the Liberian Dollar and the world which use the US Dollar.  If you visit the majority of hotels and supermarkets along Tubman Ave their prices will be in US Dollars.  I must confess I stopped by the Royal Grand Hotel a few times to enjoy an abundance of western style food which is a rarity in West Africa.

How to Get Around Monrovia 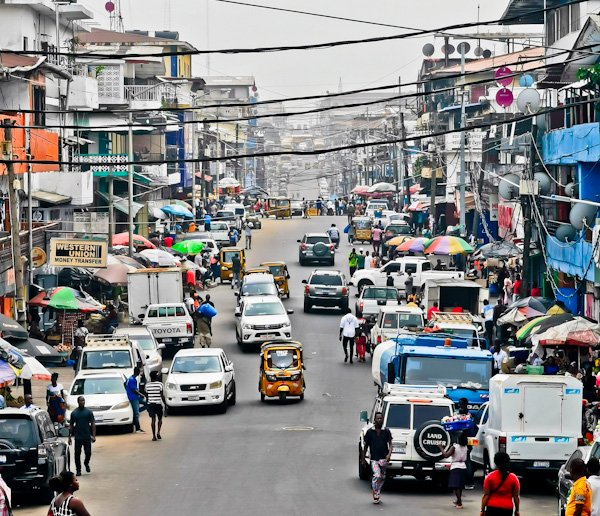 For me, I preferred to hail a private motorbike in the street.  These will take you anywhere in the city for $2 to $4.  Alternative options are to take a kehkeh (tuk tuk).  You can hire one exclusively or join one which is going in your direction. 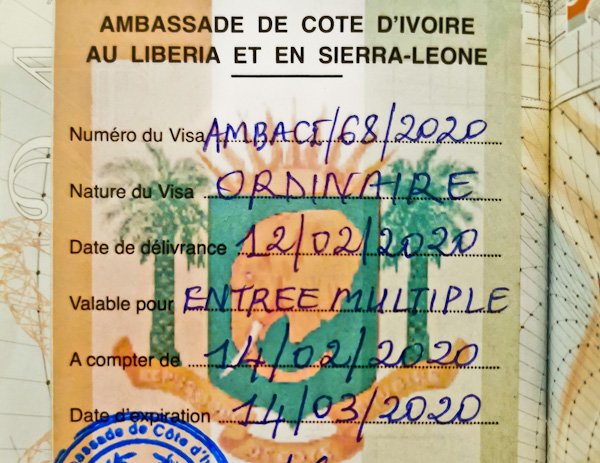 The Ivory Coast visa was incredibly easy to get in Monrovia.  Simply go to the embassy when it opens at around 9 am in the morning.  You’ll need a couple of passport photos, $70 and of course your passport itself.  In my case, the staff were welcoming and friendly and had my visa ready for collection the following afternoon.  Read how to travel from Monrovia to Man, Ivory Coast by land. 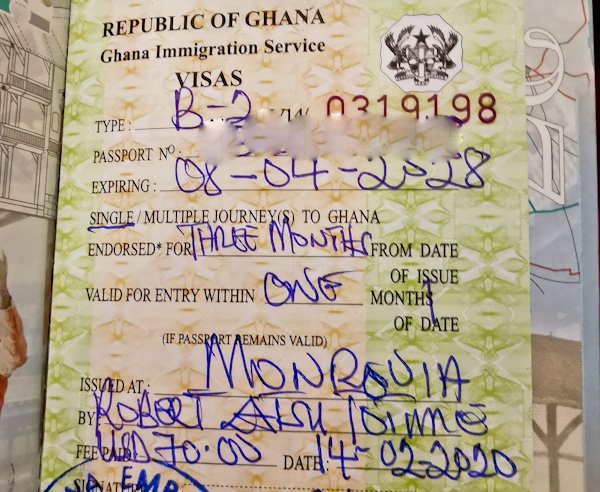 The Ghana visa has a reputation of being one of the most difficult to get in West Africa.  However, with a little patience you should be able to get your Ghana visa in Monrovia.  I must warn you that the head of the consulate may need to see you and ask you a few questions as you’re applying for it outside of your own country.  The key piece of information you need to get across is that you haven’t been home so were unable to apply in your own country.  After explaining this to him, he asked me where I’d been and checked for my Guinea Bissau, Guinea Conakry and Sierra Leone visas.

Information Required for a Ghana Visa in Monrovia

How long does it take to get the Ghana visa?  My visa was ready the following afternoon.  Be both respectful and friendly to the staff as it’s entirely up to them how long the visa process takes and if they process your a visa at all.  Lastly, here is the exact location of the Ghana Embassy. 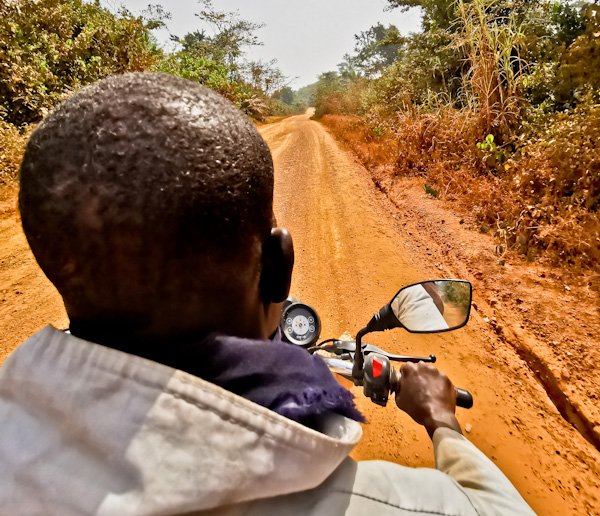 It’s quite straight forward how to travel from Monrovia to the Ivory Coast border and onto Man.  Simply take a share taxi to Ganta, followed by a private motorbike to the border.  Once you get through the border crossing, take another motorbike to Danane.  Read about my detailed journey with photos from Liberia to Ivory Coast by land.

Things to do in Freetown, Sierra Leone.  Travel from Freetown to Monrovia by land.