Things to do in Odessa Ukraine + Black Sea

Odessa is a city located in the south of Ukraine with a coastline on the Black Sea.  Things to do in Odessa;

You’ll find that hotels in Odessa are on the expensive side, for this reason you may want to check out apartments on Airbnb. 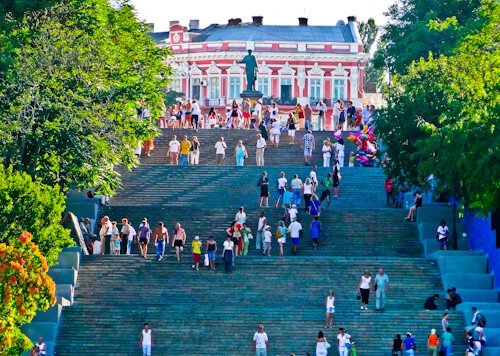 In Odessa they have managed to make stairs a beautiful tourist attraction.  The Potemkin Stairs are considered to be the gate to the city of Odessa.  At the bottom of the stairs is Odessa harbor in the Black Sea with central Odessa at the top.  There are 192 stairs in total with 10 landings.  The stairs were designed to have an optical illusion.  If you stand at the bottom of the stairs you’ll see only the stairs but if you look down from the top you see only the 10 landings and not the stairs.

The stairs featured in a famous silent movie from 1925 called Battleship Potemkin.  A more recent movie which Odessa featured in is the Jason Statham action movie Transporter 3.

If you are unable to climb the stairs (or too lazy) then adjacent to the stairs is a funicular.  For a few grivna you can take this up to the city or down to the Port of Odessa.

Statue of the Duke of Richelieu (Duc de Richelieu) 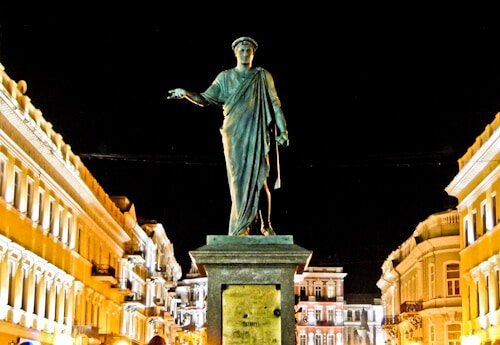 At the top of the Potemkin stairs is the Statue of the Duke of Richelieu.  Behind the statue are lots of Soviet style buildings, Odessa really has a beautiful entrance.  The Duke of Richelieu was a historic French governor general.  He was one of the founders of the city of Odessa.  Another significant statue located close by is the statue of Catherine the Great.

Located close to the bottom of the Potemkin stairs is the Monument to Orange.  During the 18th century, the construction of the city of Odessa depended on it having a seaport.  Emperor Paul I cut off funding for the seaport.  The people of Odessa started to send tropical fruits to the king before going to the court where he gave them money to complete the project.  The monument is of an orange which is believed to have saved the city of Odessa.  There is a miniature Emperor Paul I located inside the orange as well as Odessa’s famous landmarks. 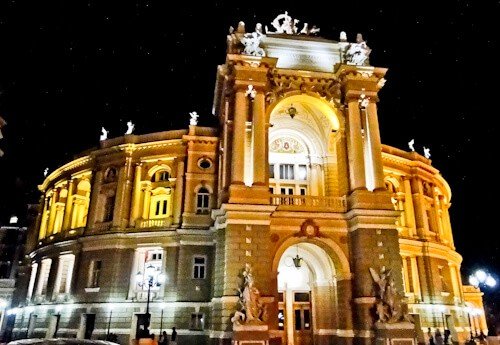 The Ukraine is famous for its opera and Odessa has a huge opera scene.  You can check the opera schedule to see if there is anything on when you visit.  The horse shoe shaped auditorium is absolutely stunning, it’s worth seeing a performance just to see the interior.  The Baroque style building was completed in 1887 and is the oldest theater in Odessa.

Located in Cathedral Square, the Transfiguration Cathedral is a very Instagrammable orthodox cathedral.  Opposite the cathedral is the famous Odessa Passage hotel which used to be the best hotel in Southern Russia.

Vorontsov Palace is a 19th century palace with a colonnade built for Russian Prince Mikhail Semyonovich.  The palace was built where the home of the Duke of of Richelieu formerly stood.  Nowadays only the facade and front end of the palace remains.  The remainder of the palace has been modified in apartments.  The colonnade and Medici lions are the most Instagram worthy parts of the palace complex. 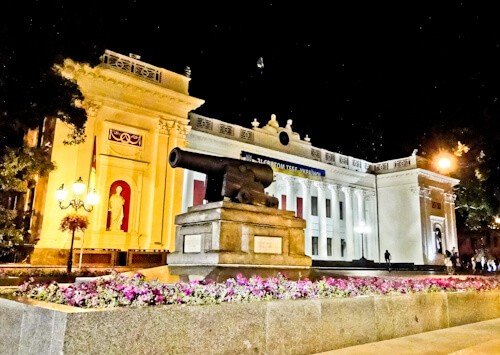 I found the Odessa City Hall to be the most beautiful building in the city.  There are 2 large statues in the facade at each side of the building.  These are statues of Ceres and Mercury.  Ceres is the goddess of agriculture and Mercury is the god of trade.  The city hall used to be the Exchange building which is why these 2 statues are here.  The cannon you see in front of the building is from the British vessel, HMS Tiger which sank in the Black Sea during the Crimean war.  There is also a Pushkin monument nearby as he lived in Odessa for a short period. 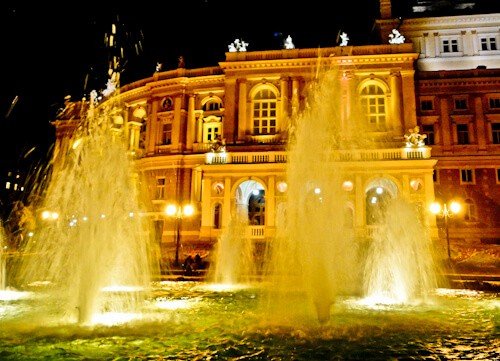 As well as beautiful buildings you’ll find lots of parks and fountains in the city.  The park you are most likely to visit is the City Garden as it’s right in the center.  City Garden s the oldest park in Odessa.  Istanbul Park is located at the bottom of the Potemkin Stairs.  Also in the center is Palais-Royal Garden which used to be called Charles Darwin park during the Soviet era.  Other parks surrounding the city are Shevchenko Park and Arboretum Pobedy.  If you are traveling to Odessa with kids then you could take them to Odessa Zoo. 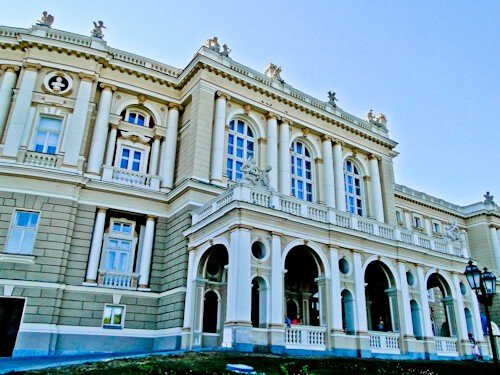 Museum lovers have plenty of interesting museums to visit in Odessa; 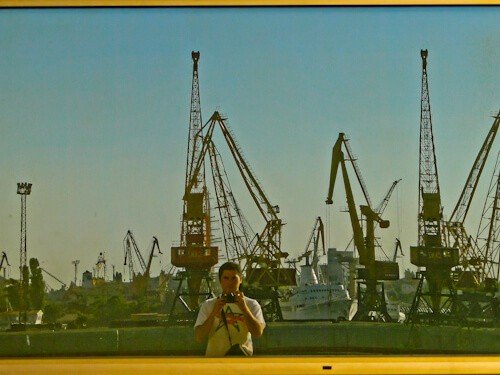 Many people on a Black Sea cruise make a stop at the Port of Odessa.  It has lots of bars and restaurants and is located a short walk from the Potemkin Stairs.  From the cruise port you can see the red and white Vorontsov Lighthouse.  You’ll also see a lot of freight which arrives at the post because it is connected to the railway line.

You will need to take a taxi to the beaches and nightlife in Odessa.  As soon as I got out of my taxi and walked 50 meters I was approached by 3 policemen.  The policemen urgently needed to check my passport which I didn’t have.  As a result they told me I must carry my passport with me at all times as Ukraine is not in the EU.  Consequently, they demanded a $200 fine which I had to haggle down to $5.  In this area police target foreigners for easy money so carry your passport or prepare to bribe them to leave you alone.  Having said that the night life is worth the taxi ride down and hassle with the police.

How to get from Odessa to Kharkiv

The bus station is located close to the train station in Odessa.  It’s possible to walk from the center to the bus station, alternatively the local bus is easy to take there as well.  There’s a McDonald’s conveniently located outside the bus station with a good bathroom facility.  I recommend you buy your bus ticket a day before leaving to check the schedule as well as reserve your seat.  The bus from Odessa to Kharkiv takes over 12 hours so you may consider taking an overnight service.