Things to do in Ohrid Macedonia + UNESCO Lake Ohrid

Ohrid was the capital city of the first Bulgarian Empire.  It’s also located on the banks of the UNESCO Lake Ohrid.  Things to do in Ohrid Macedonia include;

I was staying at Vila Mal Sveti Kliment Hotel and Winery which is within walking distance of all the points of interest.  Additionally, you can organise a boat ride around the lake through the hotel, they’ll probably sort you out with a few drinks of wine too!  Did I mention it’s a winery as well as a hotel? 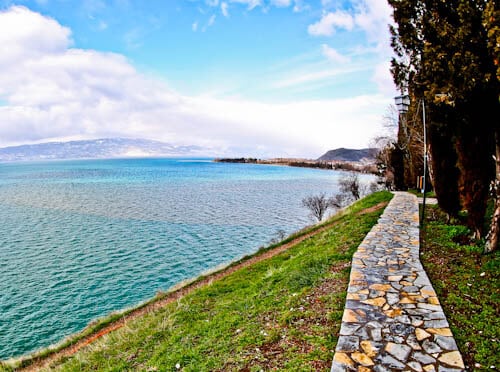 Lake Ohrid is a huge lake, in fact its official size is 358 km squared.  One side of the lake lies in Macedonia, the other side in Albania. Lake Ohrid is the oldest lake in Europe and the sixth oldest in the world.  As a matter of fact it’s over 3 million years old.  The oldest lake in the world is Lake Zaysan in Kazakhstan followed by Lake Baikal in Siberia.  Another fact about the lake is that it’s the deepest lake in the Balkans.  Finally, it’s protected by UNESCO so those who travel the world to visit UNESCO sites can see one here, in fact you can ride a boat on it! 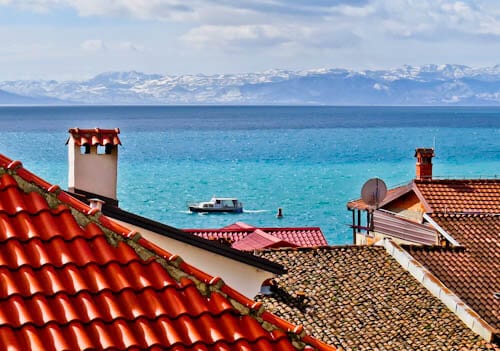 As this is one of the largest lakes in the Balkans, it would be a shame not to take a boat ride.  Additionally, it’s a beautiful lake surrounded by picturesque views.  It’s possible to organise a boat tour with the Vila Mal Sveti Kliment Hotel and Winery hotel.  A huge bonus of traveling with the winery is that I’m sure they’ll be sharing their Macedonian wine with you during the trip!  For those who count countries, I recommend you ask the captain to take a detour through the Albanian side of the lake. 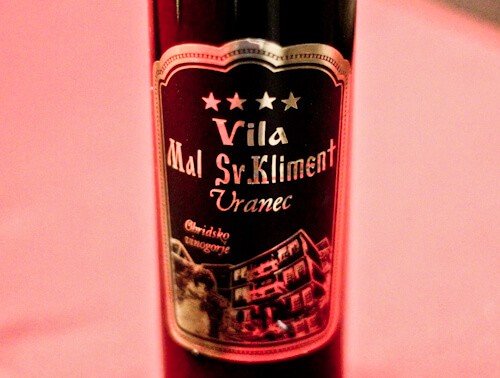 Yugoslavia used to be one of the most famous wine producing regions of the world.  Of course, this region broke up into several smaller countries but the wine culture lives on.  There is claim that the region of Macedonia was the best wine region of the former Yugoslavia.  How can this claim be backed up?  The former Yugoslav leader Tito had a favorite wine from Macedonia.  If you do want a true Macedonian wine region experience, I highly recommend you stay at Vila Mal Sveti Kliment Hotel and Winery in the center of old town.  They produce their own wine onsite and have vineyards all over the country.  In addition, they can explain the history of wine in Macedonia as well as the different wine regions, a lot more than I could ever tell you!

Church of St. John at Kaneo 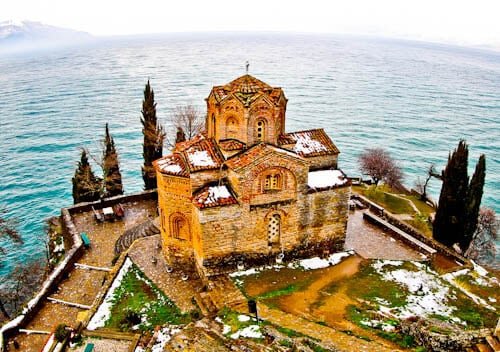 Where is the Instagram location in Ohrid?  Obviously you can take several pictures during your boat trip, or maybe visiting the winery at Vila Mal Sveti Kliment Hotel.  The one location that stood out to me as an Instagram spot in Macedonia is Kaneo.  There is a picturesque Byzantine church with the colorful Lake Ohrid as a backdrop.  Moreover, there is a hill next to the church, as a result you can take aerial photos of this location.  For the girls who like to dress up for spectacular pictures in beautiful locations, Church of St John, Kaneo is the place to pose! 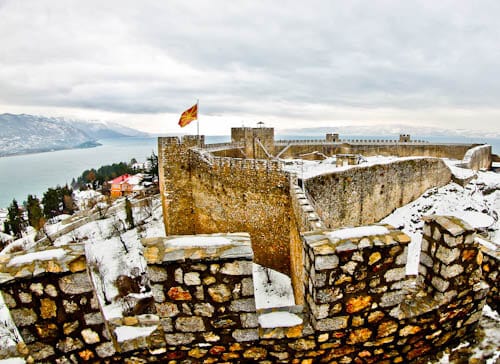 It’s likely you visited Ohrid to see the UNESCO lake therefore you’ll be pleasantly surprised to discover a fortress overlooking the lake.  Why is it called Samuel’s Fortress and who is Samuel.  Ohrid used to be the capital of the first Bulgarian Empire.  The Bulgarians utilised this fortress when Tsar Samuel ruled the Empire.  The fortress was originally built during the 4th century and has been restored and fortified over the years.  It’s most recent restoration was during this century, for this reason, it has a new feel.

Church of Saints Clement and Panteleimon 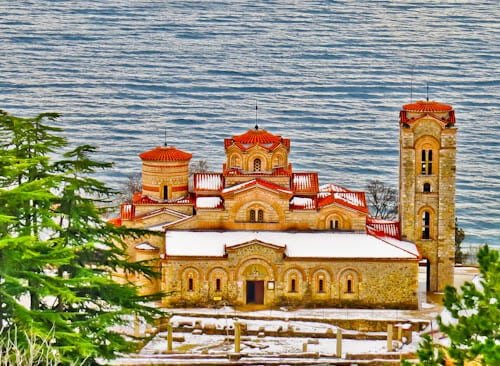 There is a very interesting fact about the Church of Saints Clement and Panteleimon.  It’s believed the church is built on the location where the first Slavic alphabet was taught.  Saint Clement would teach his students here during the 9th century.  Essentially, this was a university, you could even claim this is the oldest university in the world.  During the Ottoman period the church was converted into a mosque.  Due to its history as a university, church and a mosque this is one of the most unique buildings you’ll ever see.  Furthermore, today, the Slavic alphabet is used in Serbia, Bulgaria, Moldova, Ukraine, Russia, Mongolia and several more countries throughout this region. 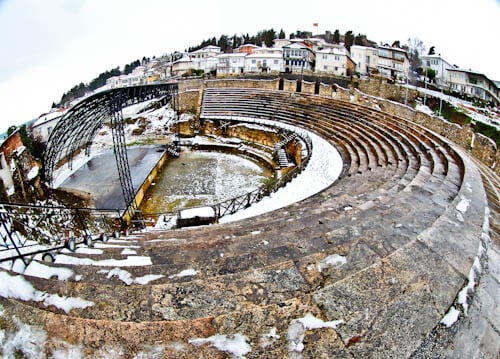 At first glance, you may think this is a Roman Amphitheater.  It is in fact a Hellenistic theater from pre Roman times, the Hellenistic period.  The Romans however did later use it for Gladiator fights.  It was originally a 2 tier theater but today only the bottom tier remains.  Today concerts are performed here with the majority of them throughout summer.  I visited the Hellenistic theater in winter and was able to explore it alone.  In neighboring Albania, there’s a huge Roman Amphitheater in Durres. 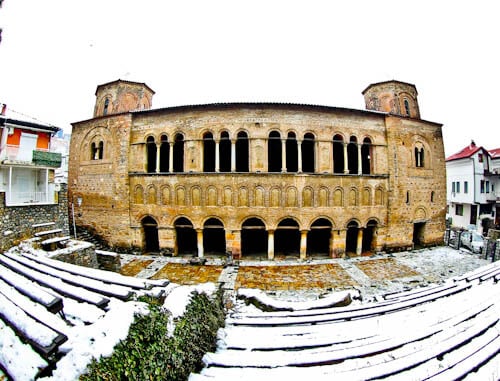 I’ve mentioned 2 picturesque churches on the banks of Lake Ohrid.  There is another interesting church in the center of the old town.  It may not be the most beautiful church but it deserves a mention for the preserved Medieval frescoes inside.  During the period of Ottoman rule, this church was converted into a mosque. 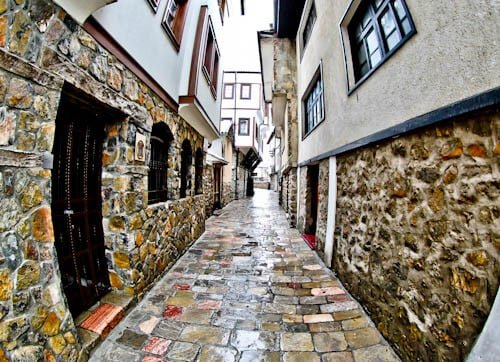 The old town of Ohrid is mostly pedestrianised narrow streets.  As you walk them, you’ll pass several picturesque buildings.  In fact, there are a few unique museums which you can enter and view the interiors.  An interesting museum is the Robev Family House which gives a true vision of life in this part of the world.  Another interesting museum is the Lapidarium.  There are a few bars and restaurants located in the old town, most of them by the banks of Lake Ohrid. 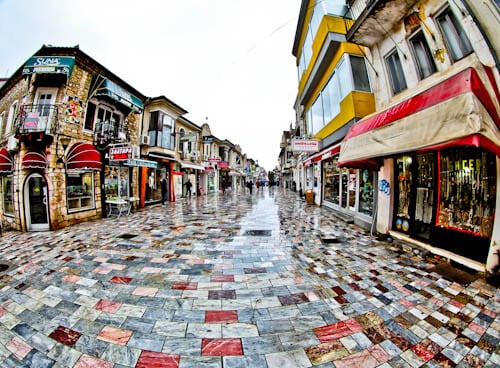 The pedestrianized St Clement of Ohrid street is full of shops, restaurants and coffee shops.  It leads from the City Square and lake to the main highway to Struga.  It’s quite an Instagram worthy street with the colorful shops as well as the colorfully paved street.

How to get from Ohrid to Skopje 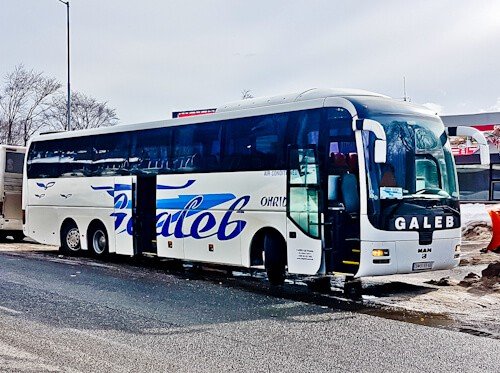 Ohrid bus station is on the outskirts of the city, as a result I recommend you take a taxi.  Taxis are good value in Ohrid and the drivers are helpful.  In fact, my driver asked where I was going and took me to the office of the Skopje bus company (Galeb).  If you want to buy your ticket in advance, there is a Galeb Ticket office closer to the center of Ohrid.  There are several departures per day from Ohrid to Skopje and the journey time is around 3 hours.